Graphene has received a lot of attention for its potential uses in everything from solar cells to flexible phone displays, with researchers touting it as a "supermaterial" that will drastically alter the future of physics and engineering. The latest research around the promising material has uncovered another buzz-worthy (pardon my pun) application for the material as a mosquito repellant. 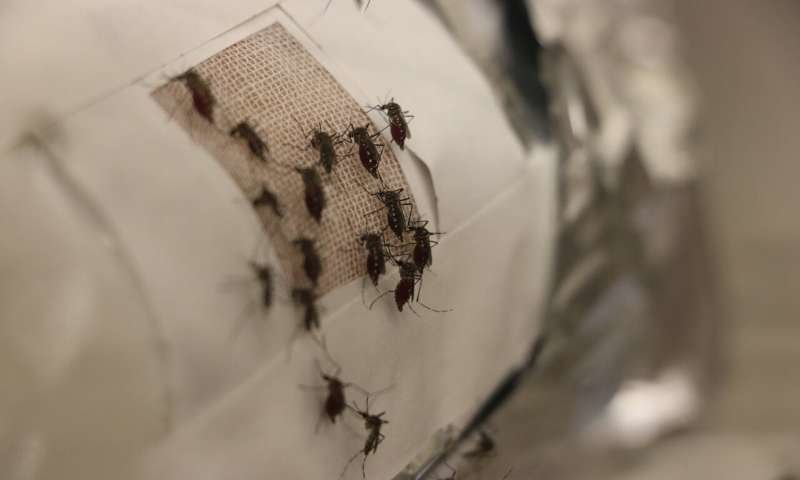 In a paper titled Mosquito Bite Prevention Through Graphene Barrier Layers, researchers from Brown University found the material capable of providing a two-pronged defense against mosquitoes. First, the ultra-thin material creates a physical barrier that the proboscis—the appendage mosquitoes use to acquire their "blood meal," as the researchers put it—can't puncture. More surprisingly, their experiments also showed that graphene might be responsible for blocking the chemical signals mosquitoes use to sense where their next meal is in the first place, essentially acting like a kind of "force field" against the pesky, disease-carrying insects.

"Mosquitoes are important vectors for disease all over the world, and there's a lot of interest in non-chemical mosquito bite protection," said Robert Hurt, a professor in Brown's School of Engineering and senior author of the paper, in a press statement. "We had been working on fabrics that incorporate graphene as a barrier against toxic chemicals, and we started thinking about what else the approach might be good for. We thought maybe graphene could provide mosquito bite protection as well."

To test the theory, researchers recruited participants who had their arms covered in either graphene oxide (GO) films with a layer of cheesecloth on top, or just cheesecloth. Those who had the graphene layer didn't receive any bites, while the other group was "feasted upon." The most interesting thing was that the mosquitoes completely changed their behavior when buzzing around the graphene-covered subjects.

"With the graphene, the mosquitoes weren't even landing on the skin patch — they just didn't seem to care," said Cintia Castillho, a Ph.D. student at Brown and the study's lead author. "We had assumed that graphene would be a physical barrier to biting, through puncture resistance, but when we saw these experiments we started to think that it was also a chemical barrier that prevents mosquitoes from sensing that someone is there."

From there, they continued the experiment by dabbing human sweat on top of the graphene barrier—which led the mosquitoes to flock to those areas as they normally would to human skin.

While all of this is promising, there's still a ways to go before graphene can be used as an effective mosquito shield in, say, camping gear. The experiments also discovered that the material has an Achilles heel: water. When wet, graphene oxide lost pretty much all of its mosquito-repelling properties. Researchers found that another form of graphene oxide (rGO) with a reduced oxygen content was effective against mosquitoes wet or dry, but that variant form of the material wasn't breathable, which doesn't really help in terms of real-world applications.

"GO is breathable, meaning you can sweat through it, while rGO isn't," Hurt said. "So our preferred embodiment of this technology would be to find a way to stabilize GO mechanically so that [it] remains strong when wet. This next step would give us the full benefits of breathability and bite protection."