Considering species beyond humans in architecture and urban planning

Our species takes up a lot of space. All over the globe, cities are expanding to house our growing population, but where does that leave the multitudes of other beings trying to live alongside us? What chance is there for a swallow or a butterfly to adapt to these intricate spaces that we have so specifically developed for human habitability? In this global competition for room, finding safe spaces for nesting and reliable food supplies will only get more difficult for almost every other species. Unless they get a little bit of help, that is.

Designing habitable spaces for birds, lizards, bats, butterflies, and all sorts of other creatures is exactly what Thomas Hauck, landscape architect, has spent his time doing for the last few years. In his efforts to design interspecies habitats, Prof. Hauck has developed an ongoing research project called, Animal-Aided Design. The goal of which, is to establish a set of standards that architects and designers can use to integrate animal habitats into urban developments. On rooftops, in courtyards, and in all the little spaces of buildings that are otherwise under-utilized, Prof. Hauck has found space for some of our more compact animal friends. 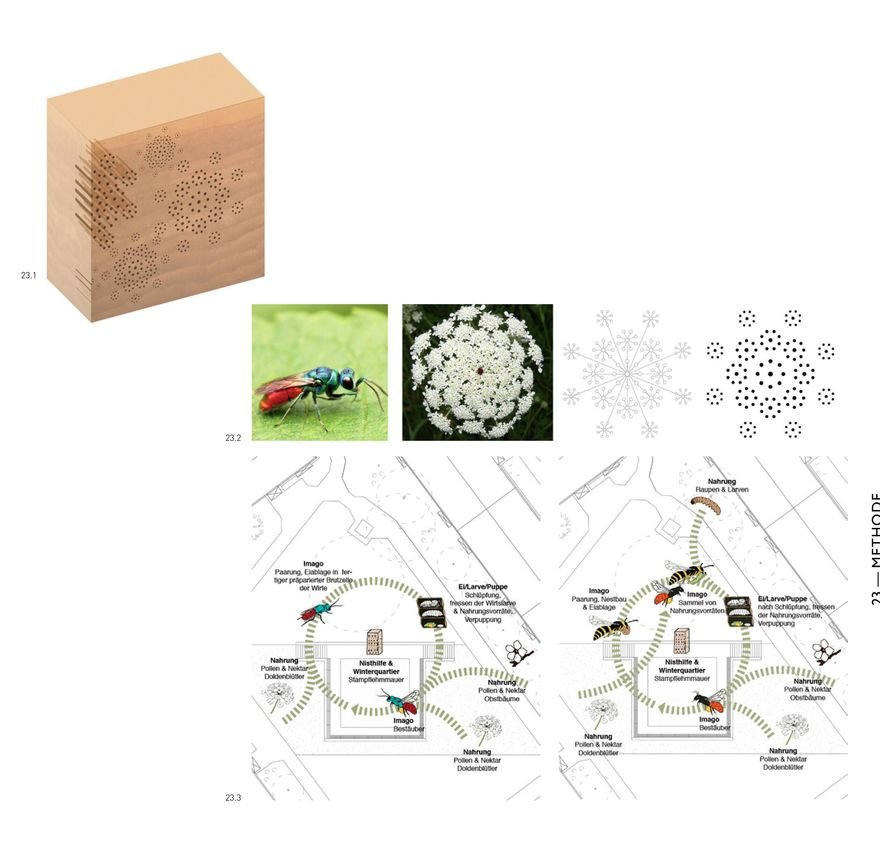 As great as it is to design a striking birdhouse, just building physical enclosures for animals is not quite enough to make sure that they will be happy and healthy in their human-made homes. Designing a space for another creature also comes with the task of ensuring that the animal has a supportive ecosystem; food-sources, nesting places, areas for breeding, and other species-specific amenities. To help designers to better understand the needs of urban animals, Prof. Hauck has worked with biologist Wolfgang Weisser from the Technical University of Munich to develop over 40 species-specific profiles as a part of the Animal-Aided Design project.

In cities like Ingolstadt and Munich, housing and architecture companies have already begun to implement Animal-Aided Design into their projects. Buildings have included designs to help species like European hedgehogs, house sparrows, and red admiral butterflies.

Designing for other species is nothing new of course, in recent years the decline of the honeybee (a still pressing issue), has led many designers to approach apiary design in new and innovative ways. Similarly, recent studies revealing the shocking decline of insects in Europe, has inspired many to try their hand developing designs for "insect hotels". The movement for non-human design appears to be growing, and the principles that Prof. Hauck and Prof. Weisser continue to develop, are helping to elevate animal focused design to a more serious level of discourse. Animal-Aided Design is a step towards helping designers address growing biodiversity issues that are plaguing urban environments, where ecosystem services for both animals and people are suffering dramatically.

Whether you personally like animals and insects, or you find some of them weird and gross, the decline of biodiversity is bad for everyone. Across the planet, the acceleration of extinction is a growing crisis, in the US, the weakening of protection for endangered species has made the issue even more dire. For designers, by merely acknowledging that we live in an ecosystem with other species, as Animal-Aided Design does, we can begin to shift design practices towards more environmentally healthy practices.

So perhaps, as you find yourself working through your next project, be it a sound system, an apartment building, or a pair of boots, you might consider the hedgehog, or the butterfly, or the black bear. You might consider that perhaps whatever you're creating, at some point will likely interact not just with the human user-group you designed it for, but with another species entirely. It is the opportunity for the designer to make that interaction a positive one.

(You can find out more about Thomas Hauck's Animal-Aided Design here. )

Title image is of a European Hedgehog, Photo by kallerna (source)