Shai Goitein has always loved airplanes. As a little boy he built hobby models; as a teenager he took up paragliding; and when he joined the Israeli military, he started a 15-year career as a pilot.

He missed that aeronautic rush when he went back to civilian life and became Kodak's lead designer, overseeing industrial design at six different R&D centers around the world. He started teaching STEM classes around aeronautics, and soon launched a runaway-success Kickstarter campaign that brought those models to kids and classrooms worldwide.

Now, he's getting ready to produce his fourth model, a smartphone-controlled rig that can make just about anything—a sloppily folded paper plane, a piece of lettuce—capable of autopiloting, tricks, and onboard analytics.

After going corporate, Goitein rerouted back to aeronautics

"My day job was fun, but at a certain point I got bored of it and started looking for something more meaningful," he says. "My wife, a social worker, convinced me to volunteer, and I created this STEM class. This was way back in 2006. I worked with underprivileged kids about 15 years old and taught them rocketry and aerodynamics."

He enjoyed the teaching, and he learned quite a bit himself: "I saw that there was a lot going on in this area of miniaturization and flight control." He started developing planes for the class, and they were so fun he wanted to share them more widely as a weekend product.

Goitein developed a product called PowerUp 3.0; it's an electrical add-on that turns folded paper airplanes into smart flying machines, offering a lesson on the interplay between yaw, thrust, and speed. 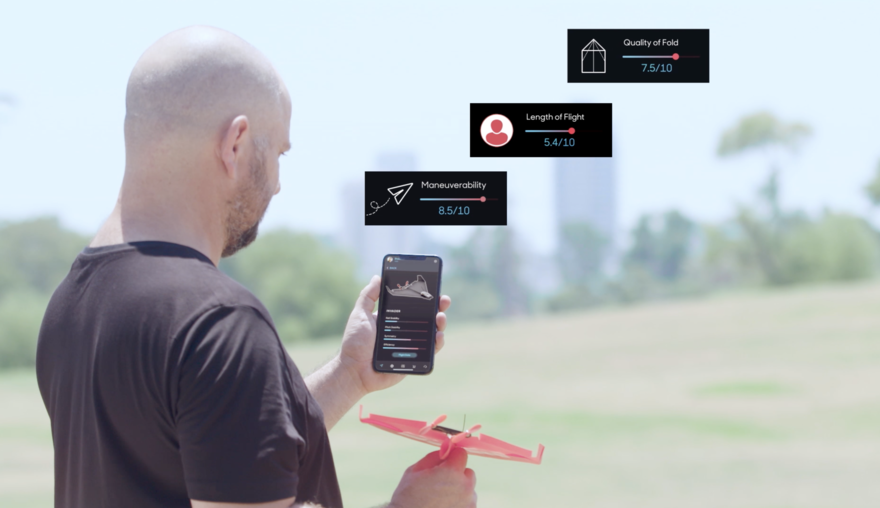 Scaling the idea up, up, and away

In 2013 Goitein launched a Kickstarter campaign to bring his idea to a wider audience. It drew in more than 21,000 backers, allowing him to quit his job and build his own family-owned business.

That business is taking off. Hundreds of teachers are now teaching aerodynamics with PowerUp planes and sharing their lessons on Workbench, alongside lesson plans for other esteemed STEM products like Sphero and Makey Makey. "Everybody's doing coding—we're a hands-on, really experimental platform," Goitein says. Still, he observes what works for those other products and what resonates with teachers, tweaking his offerings to emphasize features like the telemetry stats dashboard for quantified feedback: "Teachers love data."

All the while, his team purposefully plays down the educational element. "We market it as a fun toy," Goitein says. "Our mission is all about making things that are fun and inspiring. I think once you get kids inspired—adults as well—it empowers them."

The latest launch taking off

The latest model, the PowerUp 4.0, combines many of the elements that have been popular in previous iterations. Autopilot mode, tricks at the push of a button, a twin motor architecture, gyro and accelerometer sensors, and night flight mode with LED lighting make for dependably thrilling flights.

"We took the lessons, the pain points, and we learned the key areas that customers are really looking for. They're flying in windy conditions, they don't know how to fly, they don't know how to launch, they want a sturdier platform because they're making airplanes from more than paper—paper, foam, there are many different ideas."

The PowerUp 4.0's sensors smooth out flights in windy conditions, give you data to inform how you make and fly your planes, and create enough stability to get experimental materials off the ground—in their Kickstarter video, for instance, the team features an airplane made from a lettuce leaf.

As always, Goitein's top priority is making sure that the PowerUp 4.0 is infectiously fun to play with; all the high-tech features achieve that aim while also teaching increasingly complicated STEM lessons. "We're not going to solve the world's problems with paper planes," he says, "but maybe the next engineer for Mars exploration will be a kid who first made a paper plane with his grandfather as a weekend project. We're adding a whole new set of tools that turn it into something much more exciting, interesting, and educational."