Local historic architecture can improve your design skills. Hit the bricks this weekend to jump start your education.

Though I am a furniture maker, many of my design cues come from architecture. Thousands of years before furniture became commonplace amongst all corners of society, there were people thinking deeply about the design of buildings, their proportions, facades, mouldings, pediments, columns – and how all these details were processed by a viewer.

As a result, many of the ideas and terms in furniture design come from the field of architecture. So I'm amazed when a fellow woodworker has little interest in studying classical, vernacular, sacred or modern architecture. It's like a chef who has no interest in farming.

Now, before you rush out to enroll in architecture school, let me tell you how to get a crash course in it and get a taste for how it can improve your work at the drafting board and the bench. It's as easy as a walk around the block. 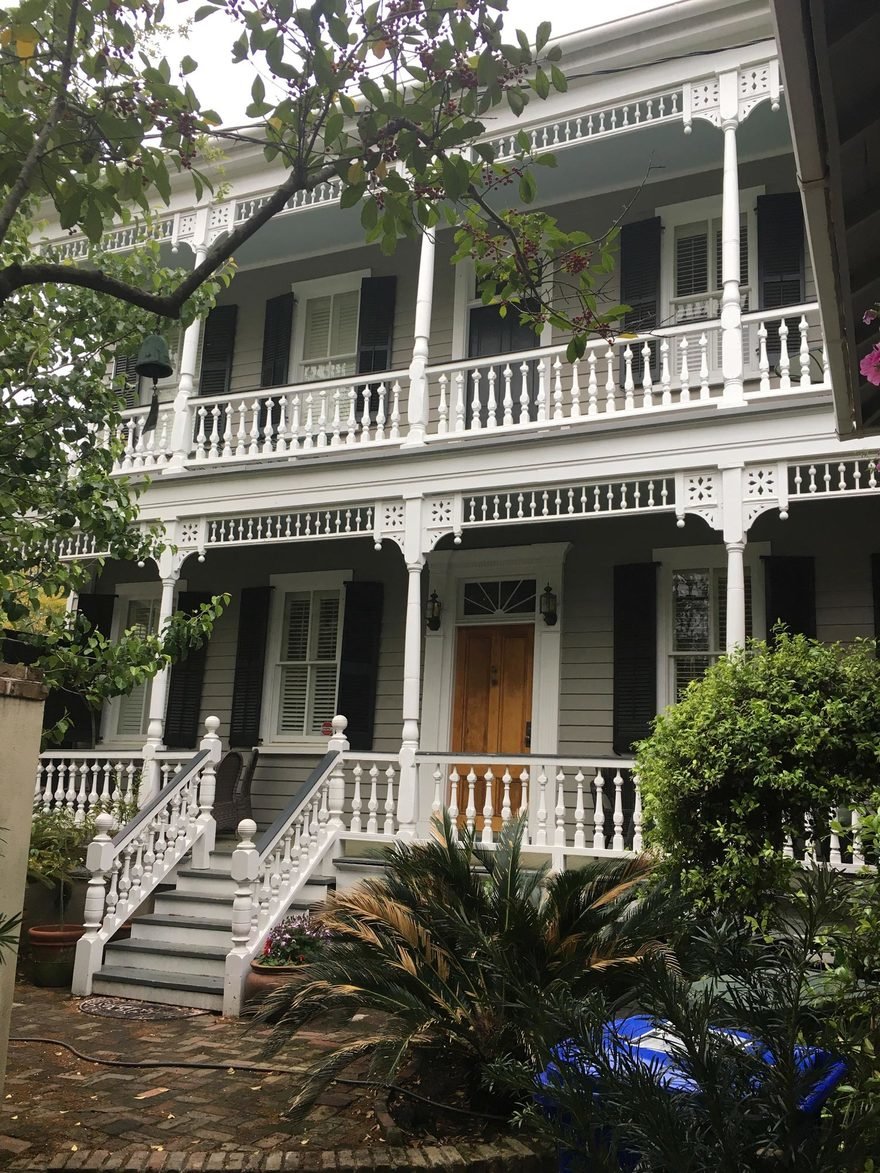 While built in the 1890s, this Charleston, S.C., home incorporates architectural elements from previous periods – it was built using bits and pieces after an earthquake. After looking at 100 of these houses, these details become evident.

When I graduated from college I worked as a newspaper reporter in South Carolina, and one week my editors sent me to Charleston, S.C., to report on how the clean-up efforts from Hurricane Hugo were progressing.

I'd never been to Charleston, and my first appointment was with the mayor at his office downtown.

I almost didn't make it to the interview. It wasn't because of traffic or negligence. I got sidetracked by the buildings. Charleston is one of the most architecturally rich colonial cities in North America. And unlike some other similar cities (such as Colonial Williamsburg), Charleston is a living, breathing city.

After my newspaper work that day was done, I left the city reluctantly. Being surrounded by that much historic architecture made my eyes swim and my head feel drunk. I called my father in Arkansas that night and talked him into coming for a visit to Charleston with me.

He did. And he moved there as soon as he could afford it.

During my nearly 30-year love affair with the city, I spent most of my days there just walking the city streets and alleys. My dad and I pledged to walk every single street of the town, even those up in the dangerous areas above the city's connector (they're no longer dangerous areas now). I think we fulfilled our pledge three times over.

During our walks, I kept a soon-to-be-tattered copy of "A Field Guide to American Houses" (Penguin) to help me understand the differences between Adam and Georgian styles. I also got into the habit of photographing the interesting bits – the perfect examples, the outliers and the failures.

I didn't do this for any reason other than I loved the city and the houses. But as I became more of a furniture nerd (and eventually a professional maker) I began to feel the connections between architecture and furniture almost instinctively. 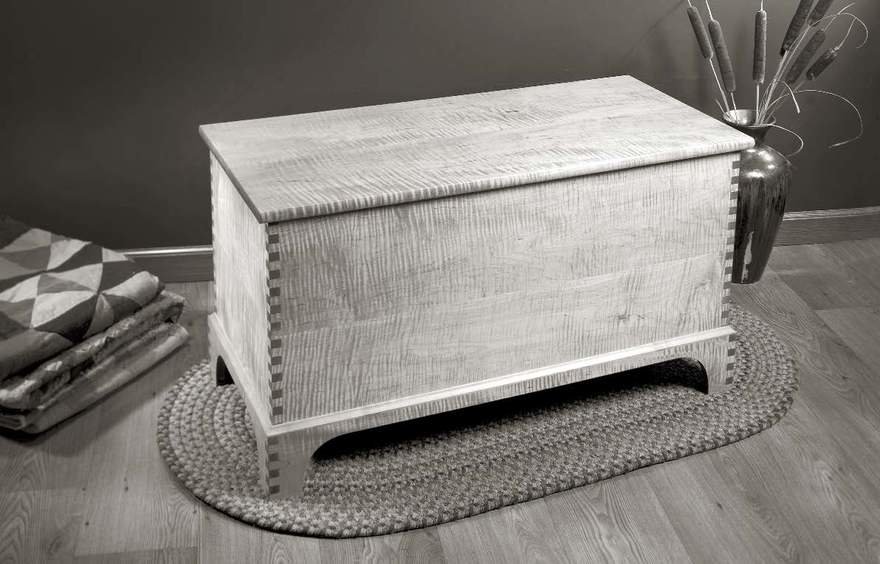 Buildings, like casework, have a base (a pediment), a main structure (a carcase) and a frieze. And the more I looked at well-designed houses, the more I understood the rules for making chests and cabinets. A handful of things I picked up:

- Squares are ideal and pleasing shapes for the ends of buildings, chests and carcases.

- The rectangles that form the elevation of a chest or a building are usually a rectangle that is a whole-number ratio, such as 3:5.

So before you rush out to book a plane ticket to Charleston and spend 30 years wandering the streets, let me tell you about a shortcut I discovered. Here it is: 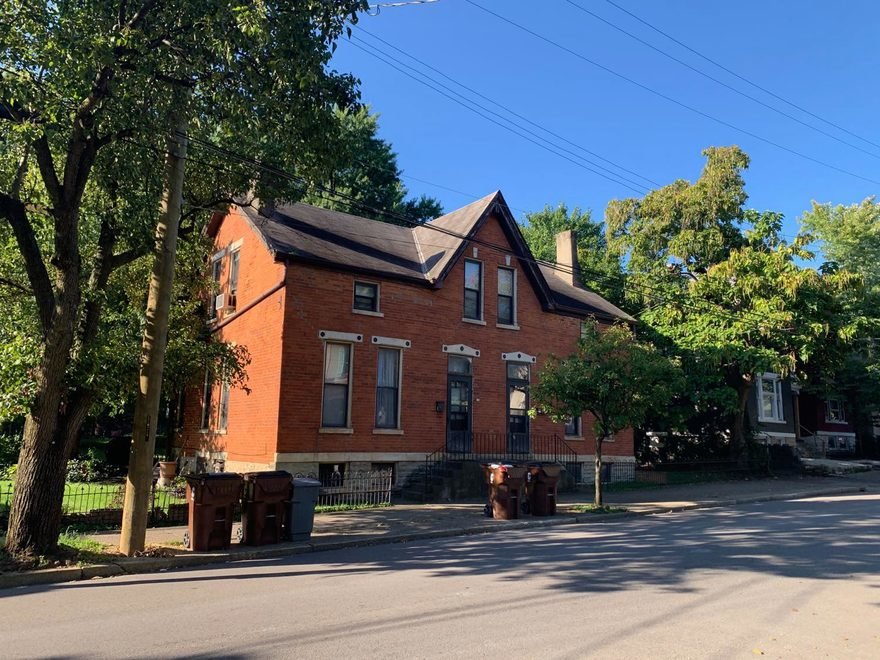 An unusual 19th century duplex on a side street in Covington, Ky. Note the near-perfect symmetry between the two units.

About a decade ago my wife and I decided to move to Covington, Ky., from our nearby leafy suburb and set up my workshop in an old urban storefront. The first step in our plan was to find the right building.

At first, I drove around the city to get a feel for the neighborhoods of this densely populated 19th-century river town. But driving, even slowly, was too fast to see anything. The houses were a smeared blur on the passenger window. I constantly missed small side streets and alleys because I was focused on not wrecking the car or smushing a city cat.

So I stopped the car, got out and started walking around, just like I did in Charleston with my dad. While walking, I found the Second Empire building that would become our workshop and home. And now that I live there in its upper floors, I venture out into the city in the early morning and evening to bookend my workday with lessons in symmetry, proportion and texture.

While Covington is 135 years younger than Charleston, it still has a lot to teach me. So I resolved to walk every street and alley of the town (and have almost fulfilled my pledge). 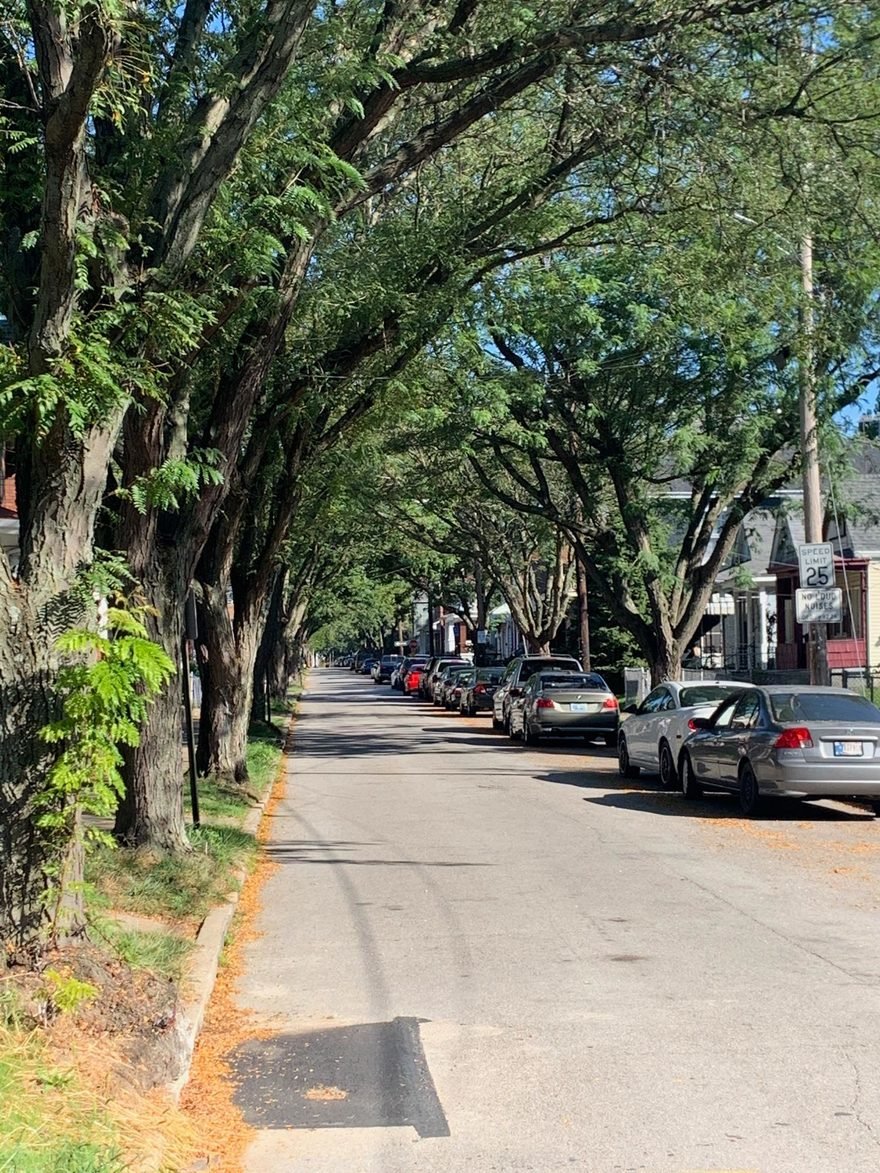 These locust trees do more work than the air conditioners and furnaces in the houses. Many old neighborhoods were designed with a particular tree in mind. Elms and London plane trees were ideal for streets with taller buildings. Locusts are ideal for smaller homes.

The lessons aren't just in proportion, they are in urban planning and forestry. While many modern designers of suburbs opt for laying out meandering, curvy park-like streets, you begin to appreciate the beauty of the strict grid of the 18th and 19th centuries. Every 20 feet there is a tree, and their interlocking network of branches over the street creates a dense canopy that shades houses and pedestrians during the summer. After the leaves drop off, the trees let the sun in to warm the houses in the winter.

The trees also absorb noise and pollution. And the canopy they build (especially the locust trees) create a Gothic lancet arch over the street, mimicking the cathedral on Covington's Madison Avenue. You will never see this from a car. 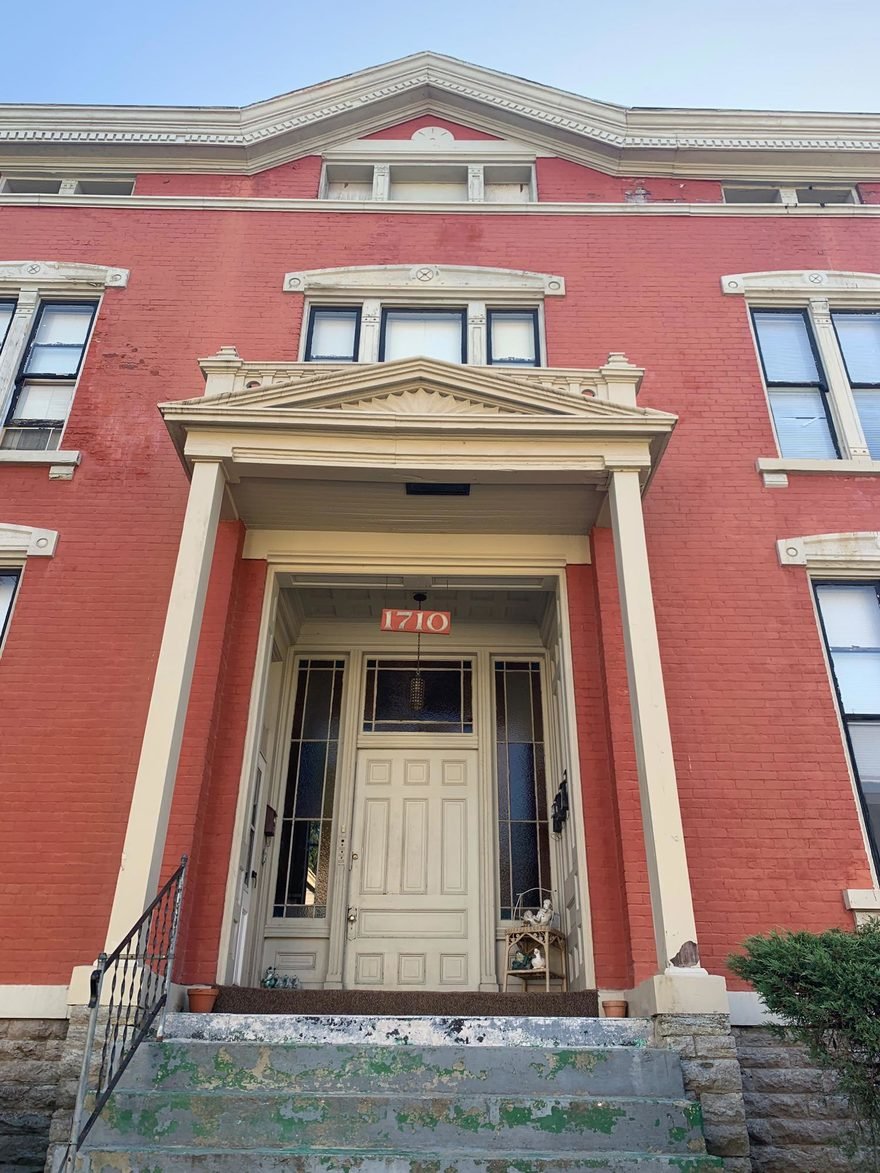 The original entrance and lights of this house are a wonder to modern eyes. These rarely survive, except in areas where the owners could not afford to upgrade.

Another important detail: I try to stray from the gentrified areas. While they are pleasant to look at, many times the improvements to the houses are stylistically wrong. In the poor areas, I find a far richer collection of things to see. The houses might be in worse shape overall, but their details have survived because the owners couldn't afford to install vinyl windows, replace the entryway doors or cover the Victorian details with modern siding.

So this is where my design education continues. Now that we live in a younger city, I am learning the language of Victorian, Arts & Crafts and Art Deco architects. It's definitely a different dialect compared to the Colonial architecture of Charleston. There's more symmetry, more texture and more technology – cast iron storefronts, welded sheet metal facades, intricate decorative brickwork and glazed pottery incorporated into the structures.

While the same proportioning systems lurk behind the period ornament it will be interesting to see what Covington does to my furniture designs. 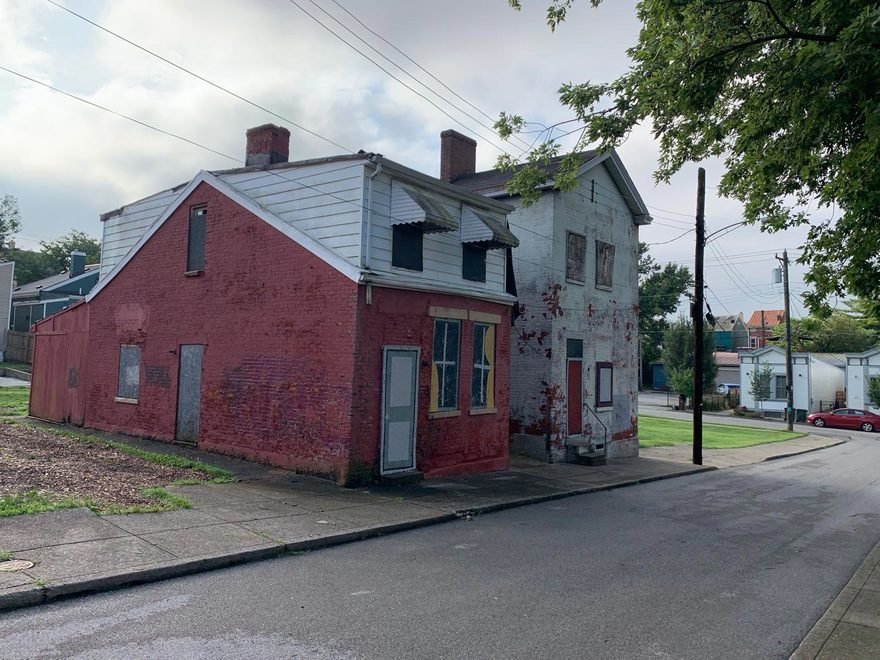 These forgotten houses are on a forgotten street in Covington, Ky. Trying to imagine what they looked like when they were built is one of the exercises I use to learn how architecture works.

How to Learn From a City

After 30 years of deliberately absorbing cities as a designer, here are some tips if you want to give it a try.

Once I get to know a neighborhood, I can see what is right and wrong. I can see what is original and what has been removed or is improper. Understanding a neighborhood in this way is incredibly helpful when I design furniture. When I make an Arts & Crafts cabinet, I know in my heart what the corbels should look like (I've seen about 200 in Covington's Peaselburg neighborhood). If it's a bookcase with glass doors, I have a library of ways to divide up the glass with muntins – because of the windows I know in the city's Austinburg neighborhood. And I know that things such as stylized flowers are completely OK. 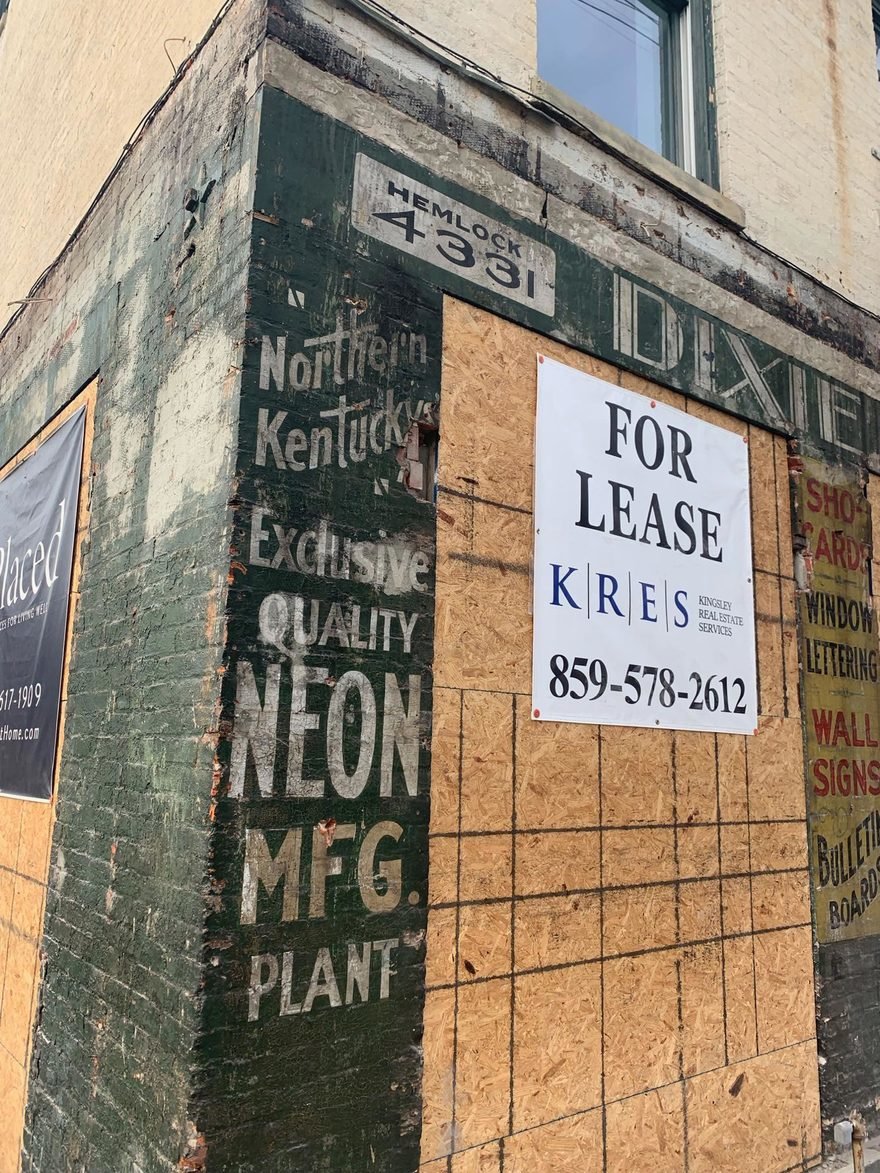 After dozens of walks around a city you might be rewarded with a gem like this – uncovered 100-year-old signs. The fonts and color and type size are all a lesson in early 20th-century styles.

All that knowledge comes from looking at Arts & Crafts bungalows and four-squares. A single bungalow might have 30 decorative details. A neighborhood of bungalows is enough to inform your work for a decade – if you will let it.

And a small city? That's enough education for a lifetime.

Christopher Schwarz is the editor at Lost Art Press and one of the founders of Crucible Tool. He works from a restored 1896 German barroom in Covington, Ky. You can see his furniture at christophermschwarz.com.