Is it better to have a straw that lasts 400 years for 15 minutes of use? Or one that degrades naturally, but adds a slight grassy-taste to your mint julep? 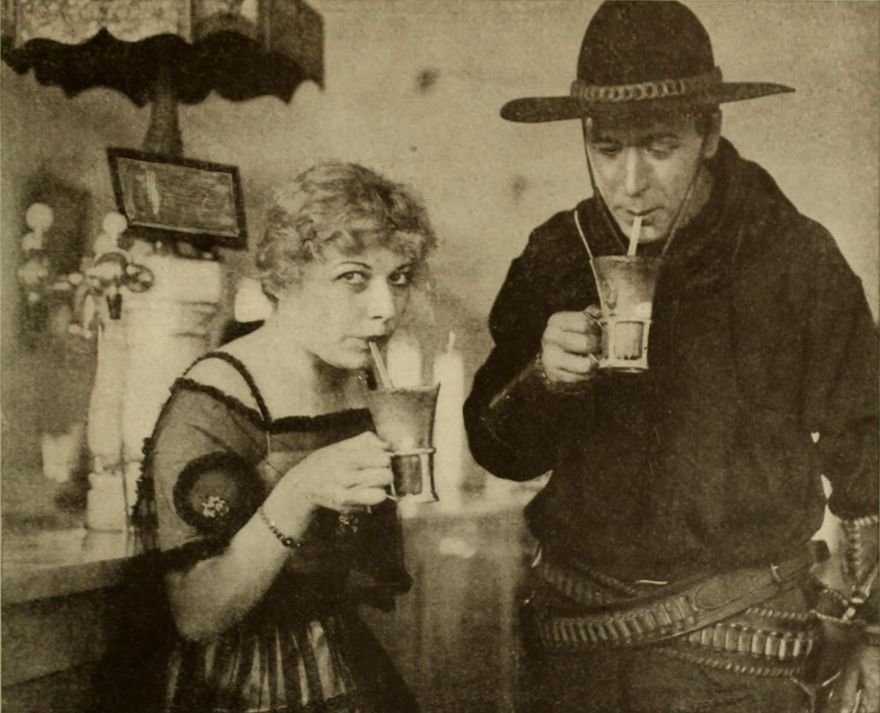 In recent years, public perception of the drinking straw has morphed from a seemingly innocuous plastic tube, into a poison-tipped, political arrow. While it is refreshing to see that such a simple physical object can still stir up some social discord in this digital age, it is also humbling to realize that even as we've created space shuttles, smart-phones, and artificial hearts, we've yet to even master this simple little device. Since the winds of culture and politics have determined that the battle over some of our worst, and most wasteful tendencies, should be waged through this ubiquitous little product, it is worth examining the origins of its design.

As is so often the case with design, nature itself can claim ownership over the original idea. The first form of drinking straw manifested as the proboscis of insects like the butterfly, for drinking up liquid from wet soil and rotting fruit, as well as sucking up nectar from flowers.

So far as human design goes, the earliest recorded usage of a drinking straw dates back to the Sumerians and Babylonians. It is surmised that use of drinking straws goes back even further but the true origins are unknown. Dating back to 3000BC, the oldest known drinking straw was found in the tomb of Pu-abi, Sumerian Queen of Ur, in modern day Iraq. The regal straw is made of gold, measures over a meter long, features a silver mouth-piece, and is ornamented with segments of the vibrant blue stone, lapiz lazuli. As humans had not yet developed plastic, the Sumerians had to seal the straw of precious metal and stone in a tomb to ensure it would last as long as it has.

However, for those Sumerians who were not of the royal class but still wanted to enjoy beer without ingesting all the excess gunk produced in the fermentation process, the typical straw was made from hollow reed, i.e. straw. With that, innovation halted. Millennia passed before anyone began to think that this initially eco-friendly design would need an update.

In the meantime, a different drinking device with nearly the same functionality came into use among native peoples of modern day Argentina. The bombilla, is a drinking straw that has the added utility of acting as a sieve for Mate and other teas. It isn't clear when the bombilla was first invented, while it definitely has been in use for the past few centuries, it is said to have been around for thousands of years. Original iterations of the device were carved from wood, but the modern bombilla is most often made from metal. 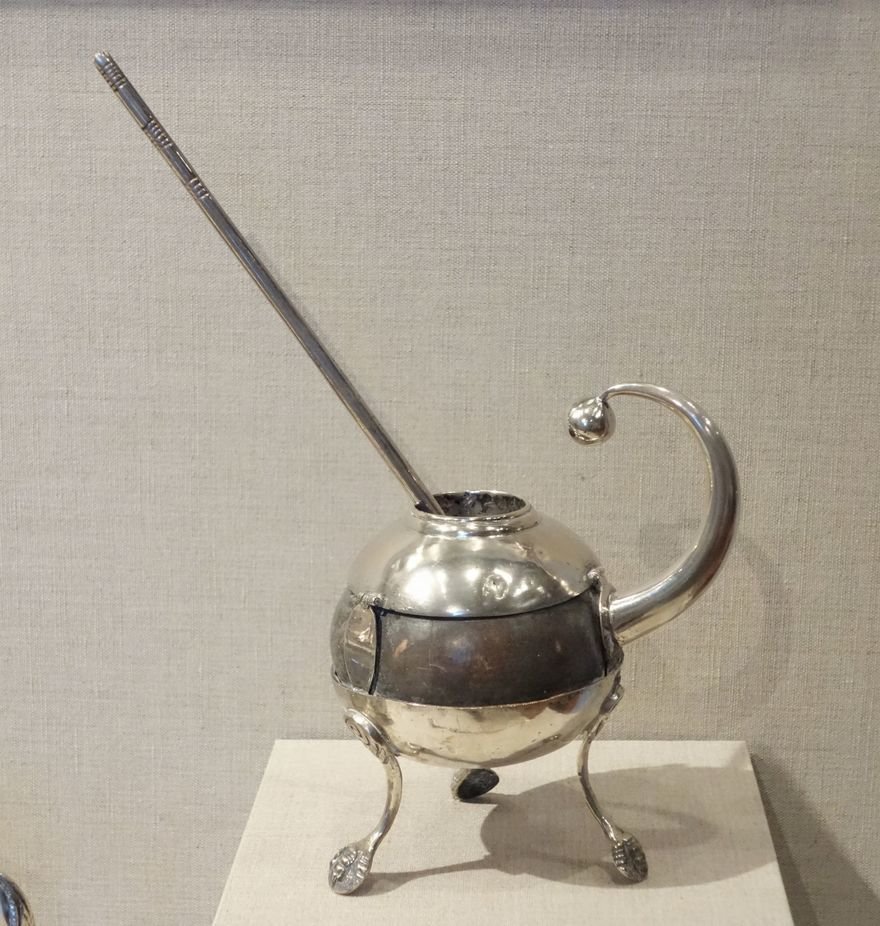 In western culture, popularization of the drinking straw did not emerge until the 19th century. At that time the most commonly used grain for the production of drinking straws was rye grass. In his 1920 book The Small Grains, Mark Alfred Carleton recorded the process of producing rye grass drinking straws:"After bleaching, the straws are assorted by hand, each individual stalk being examined, and the the imperfect ones removed. They are then cut, the five lower joints only being utilized for drinking purposes. The sheaths are then removed, and the straw washed and bound into bundles ready for the market."

Carleton goes on to note that, were it not for the use of rye in the production of straw braids, it would actually not be profitable to produce the rye straws at all, as it is only a small part of the rye stalk that is used for the drinking straw.

While people made do with rye grass, various inventors tried their hand at popularizing new designs for drinking straws. In one fraudulent attempt, W.H. Brown simply patented the South American bombilla in an effort to capitalize on the ancient design in the US. However things only really began to change when one man could not abide the hint of rye grass he tasted in his mint julep (or so the story goes). Amid his frustration, journalist and inventor, Marvin Stone wrapped sheets of of paper around a pencil, glued them together, and thus "artificial straw" technology came into being. In no time, the paper drinking straws became a massive success. 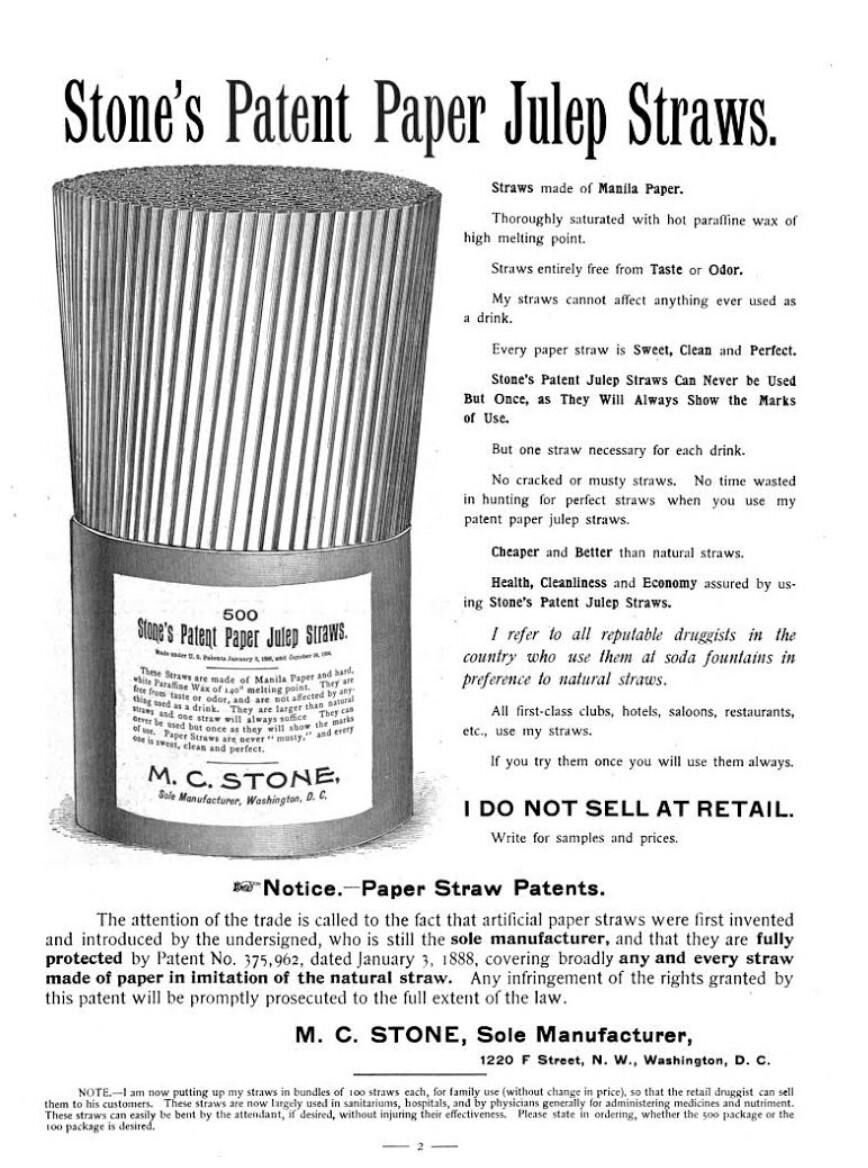 Other iterations of the straw followed, including, but not limited to, the bendy straw, the crazy straw, and the meat straw. The now infamous plastic drinking straw, only came into regular production in the 1960s and by the 1980's it had become the standard.

As they had become ubiquitous in restaurant chains around the world, it didn't take long for people to see the environmental toll of the plastic material. By 2015, the plastic straw began to endure serious scrutiny, as more and more people had come to realize that all the plastic straws we've produced haven't been degrading and are scarcely recycled. Now 8.3 billion of them can be found on beaches around the world. Today, as plastic straw bans continue to spread, designers have begun to experiment with reusable straw designs, and the paper straw has made a controversial comeback (even Marvin Stone's company has profited from the revival). Only now it has been branded as the environmentally-friendly alternative.

Which begs the question, why not return to the all-natural, eponymous straw that humanity had only recently decided was worth material modification? Better yet, since we have mastered the ability to filter our beer in the last 5000 years, why use a straw at all? While there are vital reasons as to why many people need access to a drinking straw, for designers, these questions require renewed consideration. And really, is it better design to have a straw that lasts 400 years for 15 minutes of use? Or one that degrades naturally, but adds a slight grassy-taste to your mint julep?