I do miss the hangout culture of New York City in the '90s, when it was still populated by artists. You'd bounce around from one friend's apartment to another's, and sooner or later you'd wind up in the loft of some guy who smelled like clove cigarettes, looked like he made his own soap, and introduced himself with some flowery name that he'd obviously given to himself. He was a painter, and in the corner of the loft you'd see something like this: 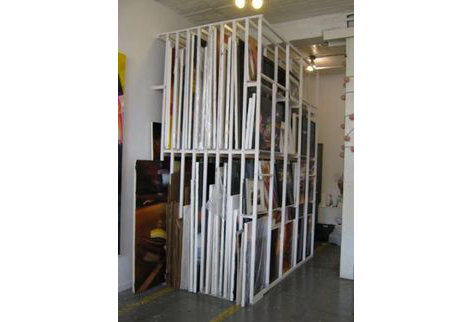 While that solution worked fine for Damocles and his Avenue B loft, proper art galleries and museums need something more professional to store paintings in than a bunch of glued-and-screwed 1x2's. In fact there are entire companies dedicated to designing deep storage systems for art. Some examples:

UK-based Constructor Group produces these pull-out panels that ride in both tracks embedded in the floor and suspended from the ceilings: 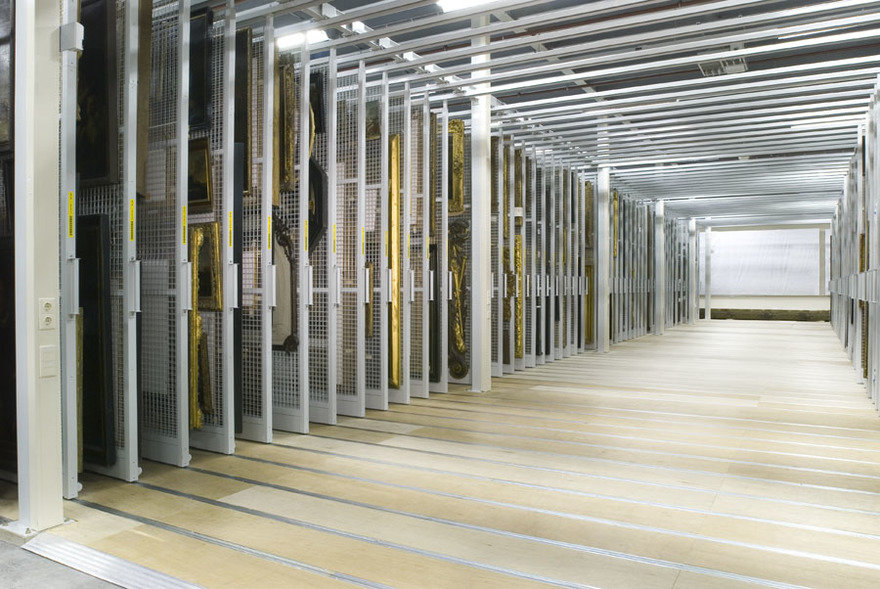 If digging up the floor to install tracks isn't possible with your space, they also offer these wheeled variants: 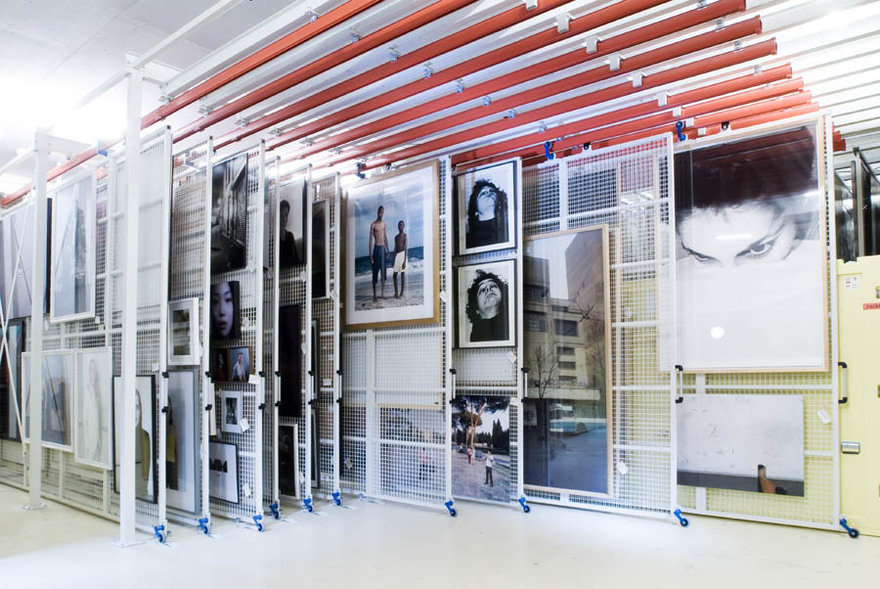 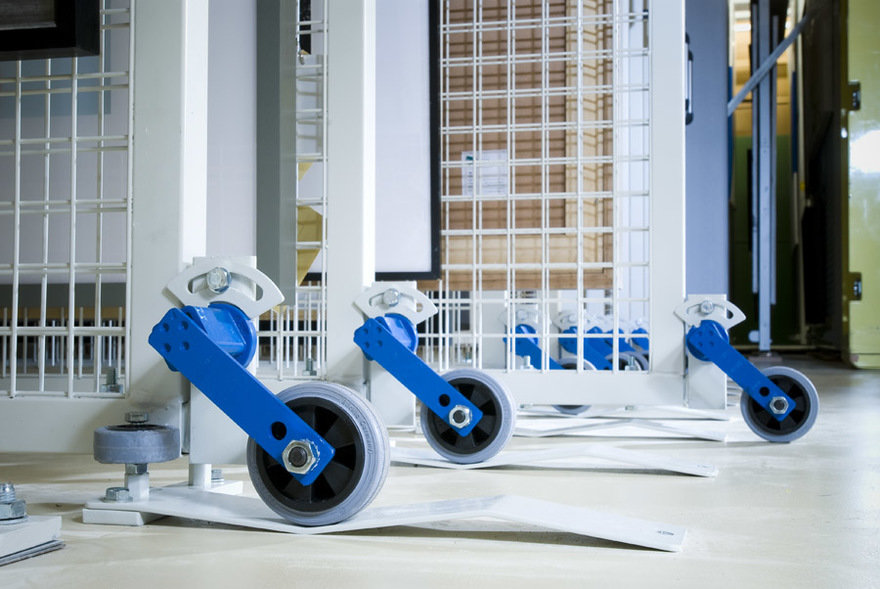 Flat, sliding racks are the best way to store lots of gigantic paintings, as seen in this system by Montel: 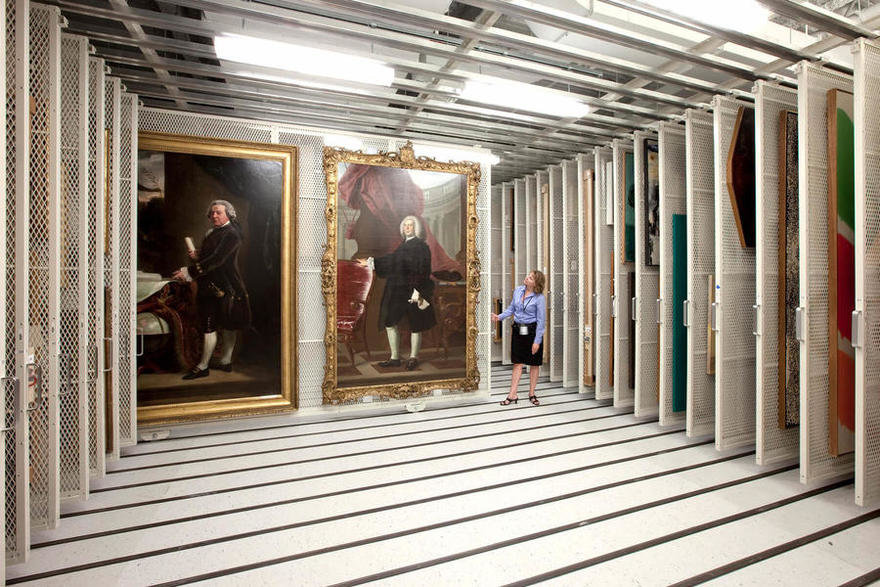 Here's an offering from Rackline. As you can see, the use of wire mesh, which provides a measure of transparency useful for quick visual scanning, is the industry standard: 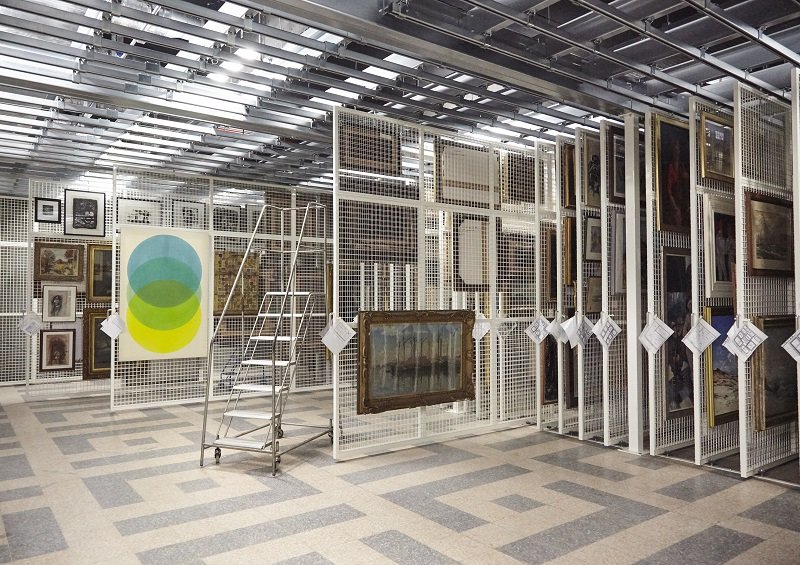 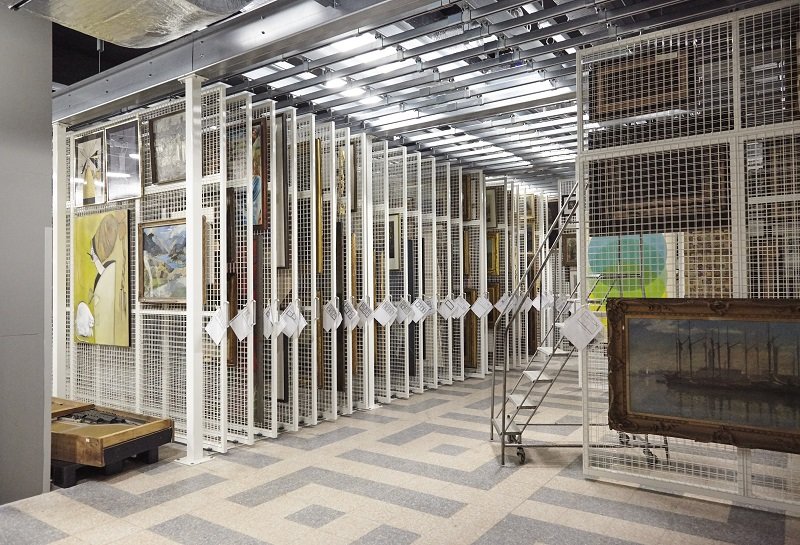 If one lacks the space to accommodate panels that pull out sideways for viewing, this alternative design offered by SpaceSaverInteriors features panels that move in the perpendicular axis: 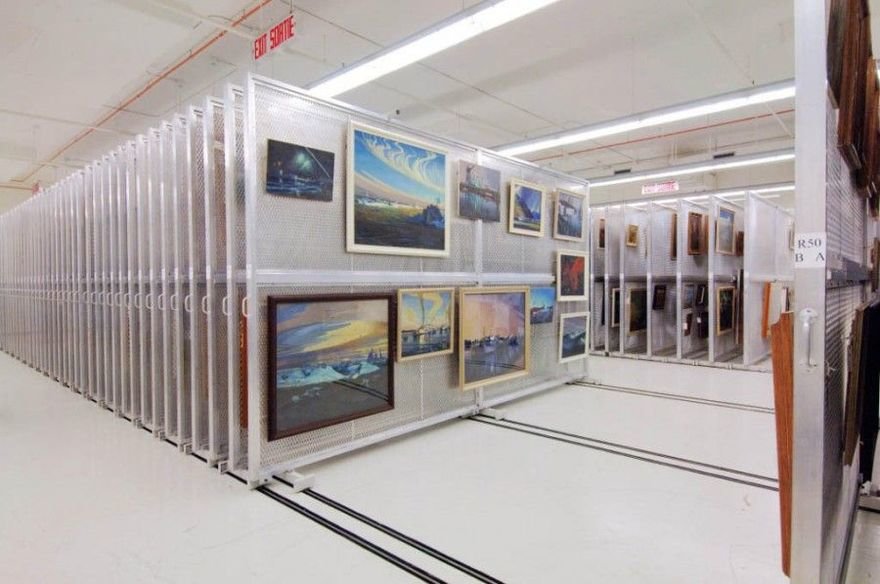 In the past 10-15 years or so, the hipper museums have come to realize that visitors actually dig seeing these racks. Thus a handful of institutions make them available for public viewing. The Brooklyn Museum's Luce Visible Storage/Study Center, for instance, has them in full view. 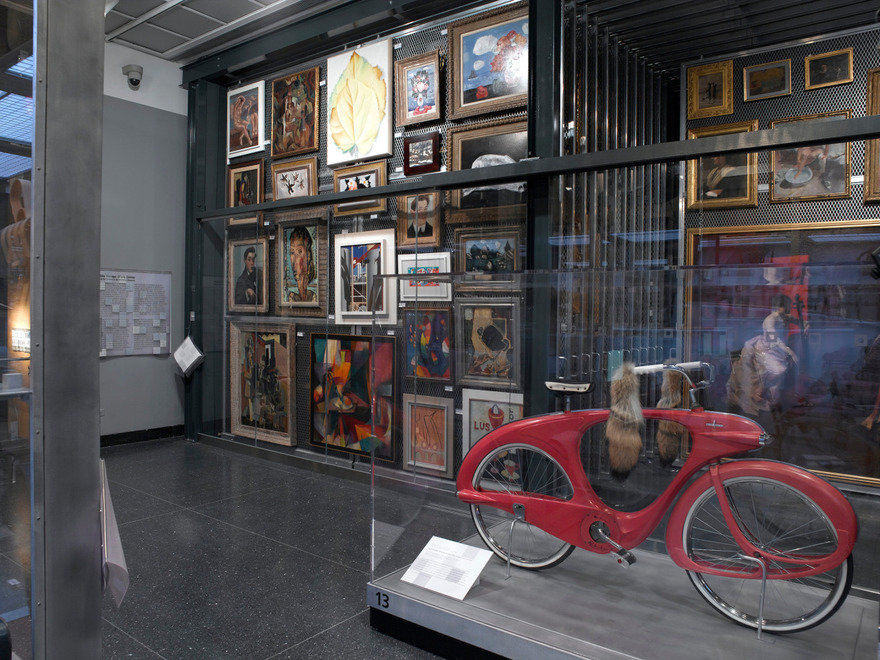 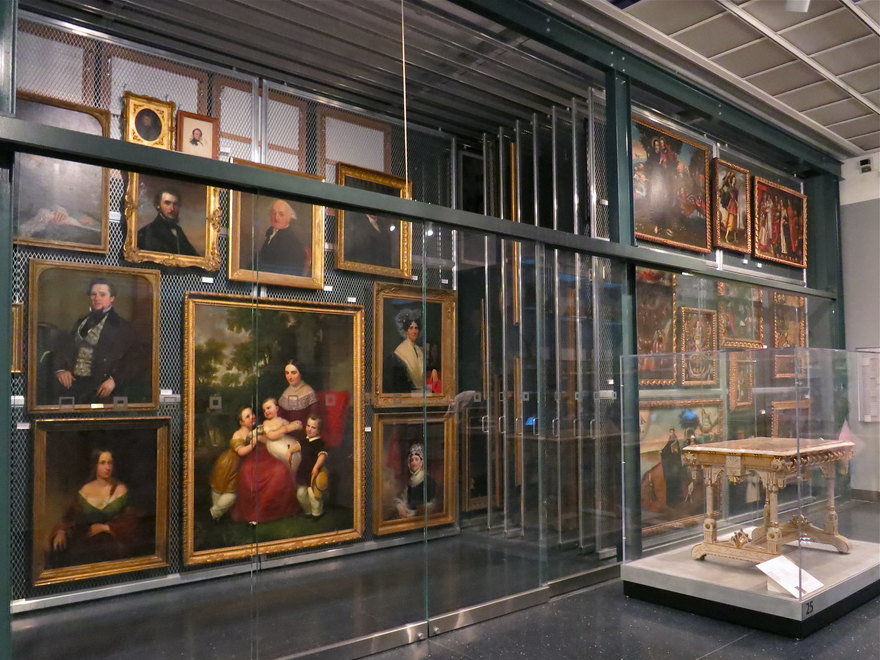 The Museum of Wisconsin Art does the same: 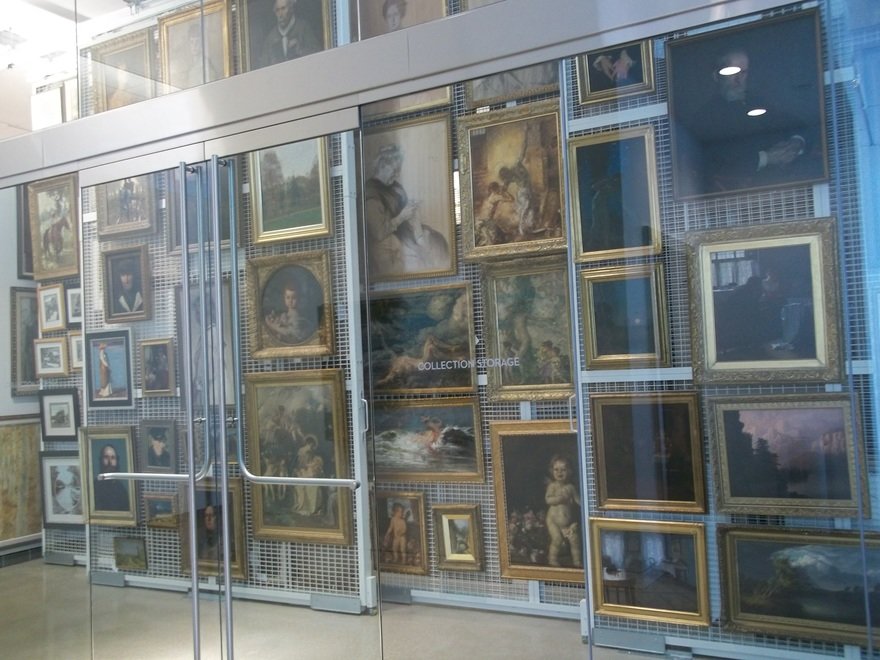 As does the Latvian National Museum of Art in Riga: 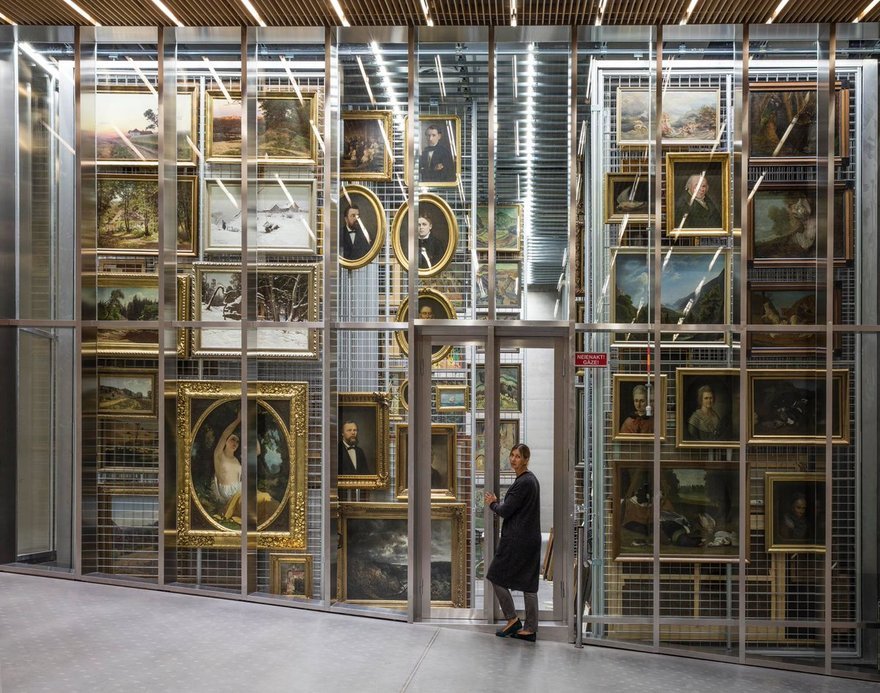 I think the visual effect of seeing the density of stored paintings, even if you cannot access them, is pretty cool. And I think it's way better than leaving them in the basement. These paintings below look like they're in fine art prison. 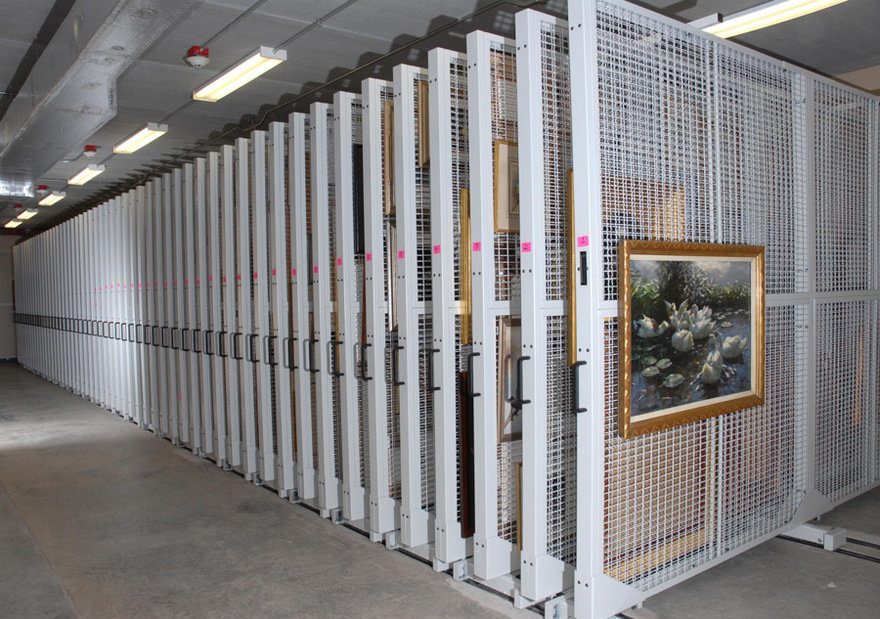