To what extent do our media devices shape our interiors?

There's an episode of Friends where Joey meets a woman who says she doesn't own a TV. He looks baffled. "What's all your furniture pointed at?"

The days of us configuring our living spaces around a media-relaying object go back to the radio (or arguably the family piano, when that was a thing). The radio was a piece of furniture in its own right, and it dictated that seating be placed within earshot. 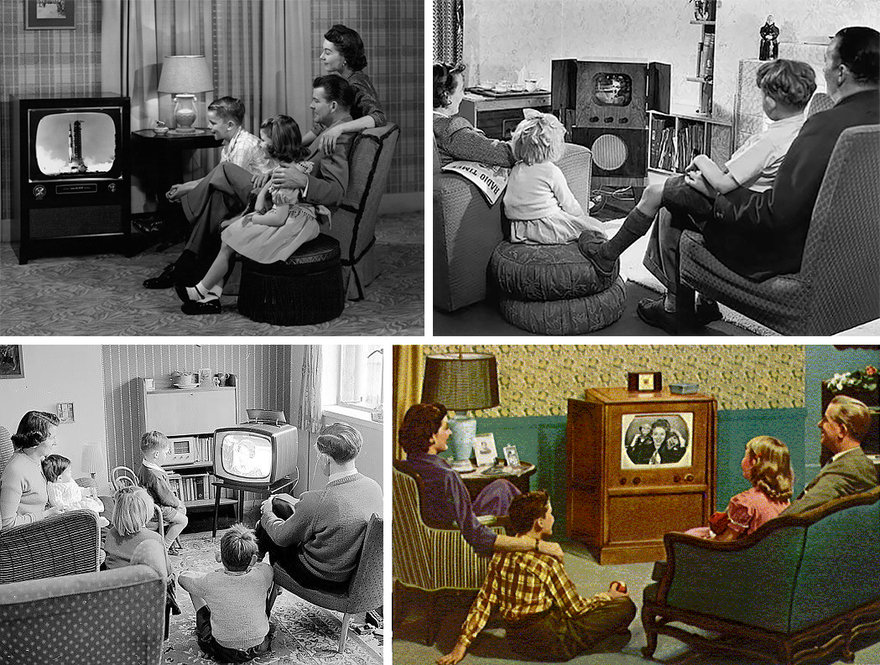 The television set was also furniture, with a more dictatorial reign: Seating had not only to be within earshot, but due to its visual nature, had to adhere to the Joey Tribbiani rule of interior design. 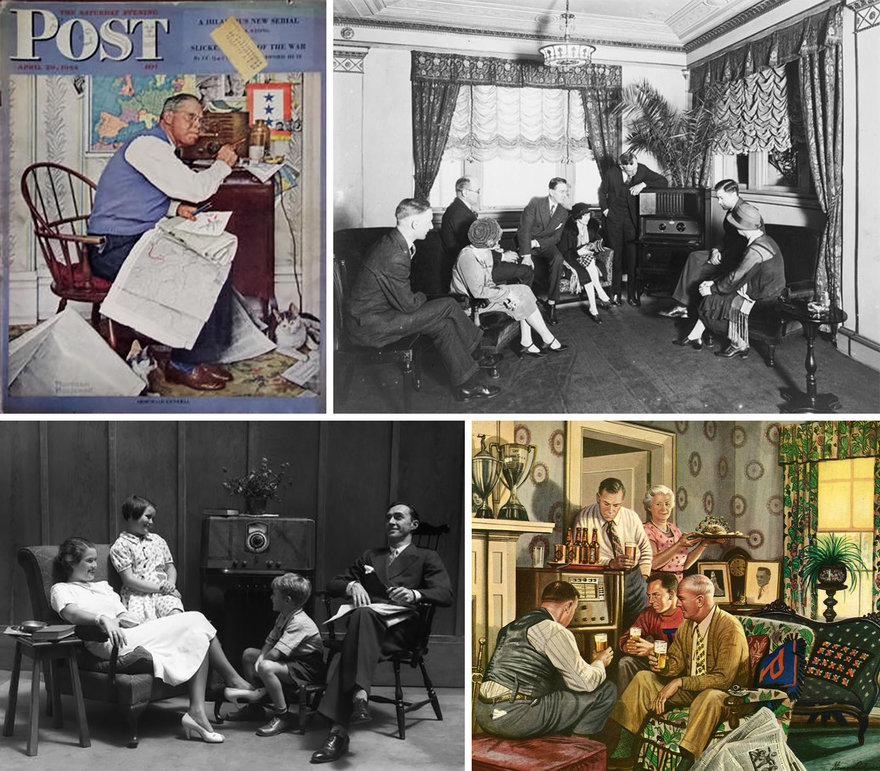 Nowadays the chief media dispenser for many is the smartphone, which isn't furniture at all. It's been reduced to a size that makes it convenient for us to bump into people on the sidewalk, block escalator egress and obstruct subway entrances whilst staring into.

But in the home, it's the computer that serves as our main media gateway. And computers live in, on or under desks. Computers aren't a piece of furniture like their predecessors, but standalone objects that are either over-engineered and -designed to the point of fetishism (see: Mac Pro, most gaming PCs) or hidden away (see: iMac, HP black boxes).

Should they be furniture? A subset of DIY'ers (and predominantly gamers, it seems) think so and have posted their custom creations online. And while the designs differ slightly, in general there seems to be consensus on several elements:

1. The computer's innards should be spread within a chunky horizontal surface that will double as the desk surface.

2. The guts of a computer, including the elaborate cooling systems, ought be celebrated and within full view behind transparent surfaces.

3. The same offset illumination used buy car-modders must be integrated.

The results look something like modern-day pinball machines, albeit in a perpendicular orientation and flat rather than angled: 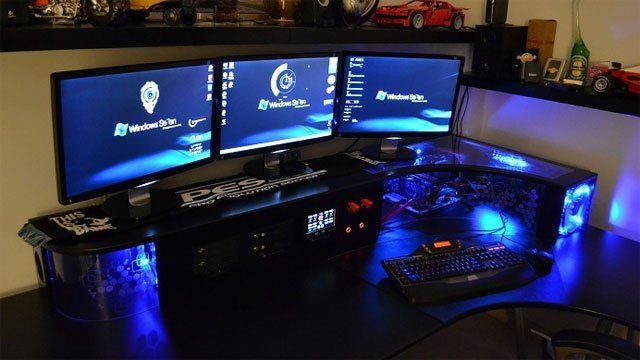 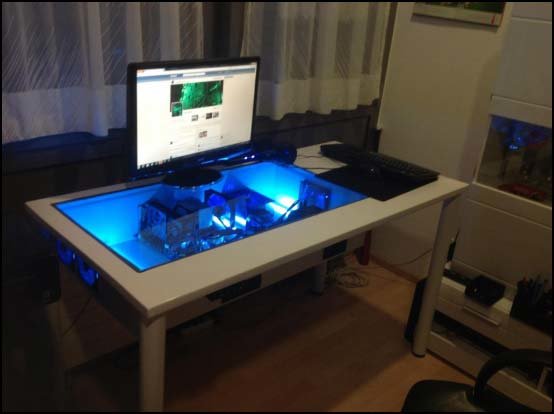 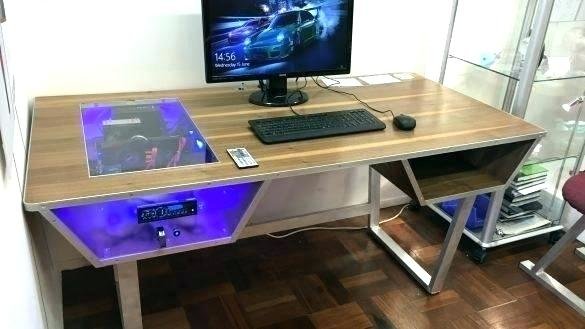 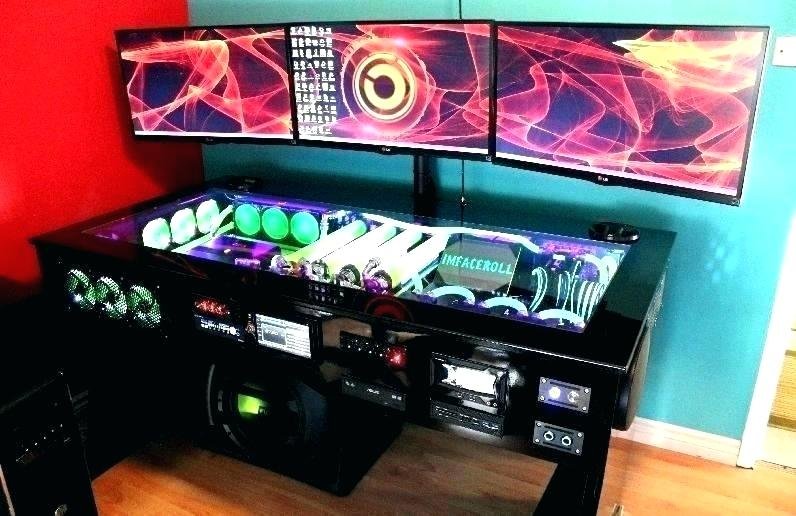 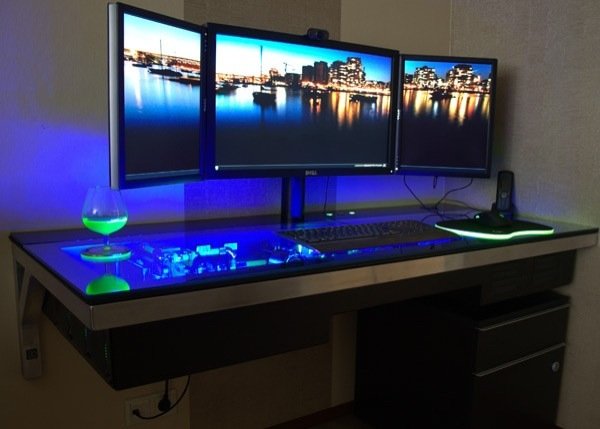 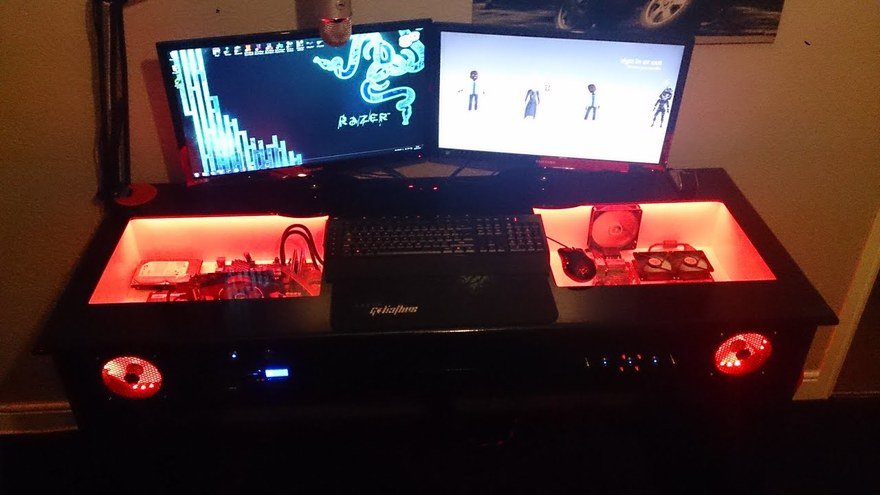 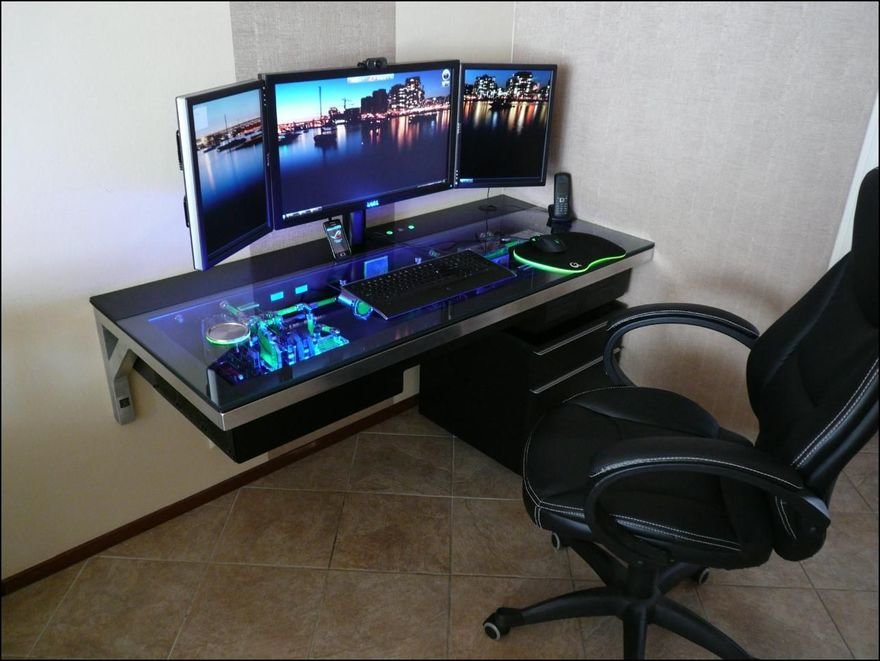 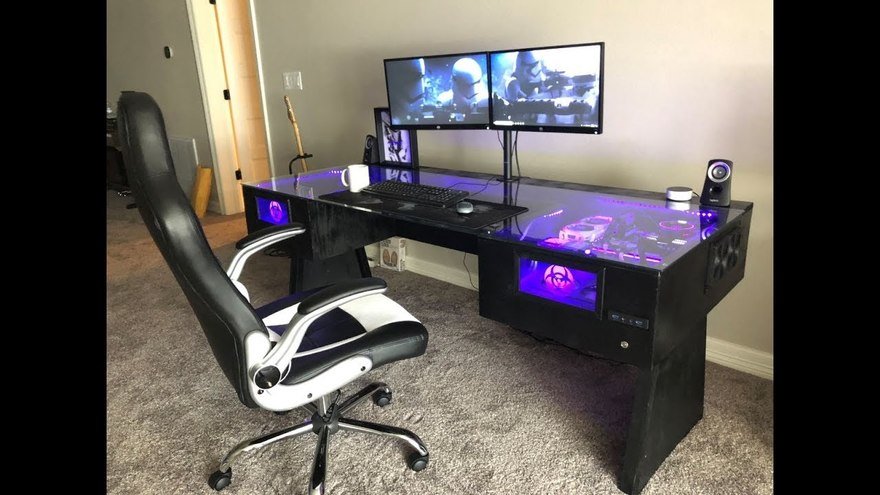 It's more common that the opaque parts of these desks are done in black or silver, and less common that you see anything resembling wood. But there are a couple of outliers:

They've all got an aesthetic that says "DIY" more than "designed," but seeing that last one made me wonder: Would it be possible to do something cleaner-looking, along the lines of Braun's classic record players? 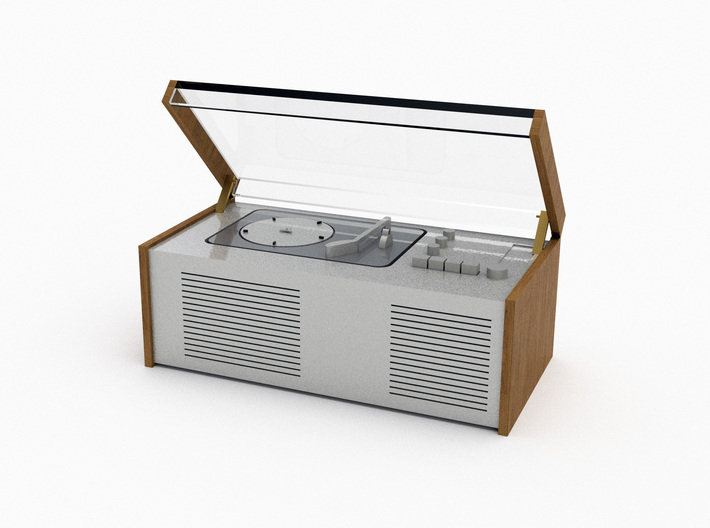 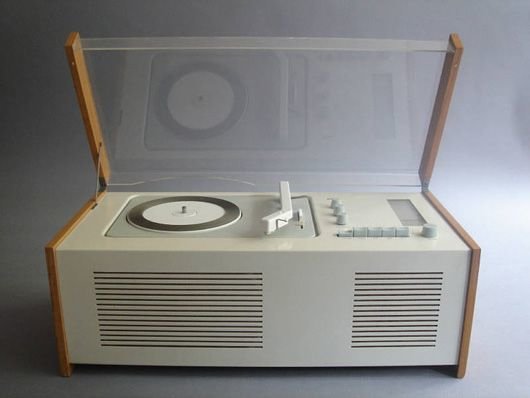 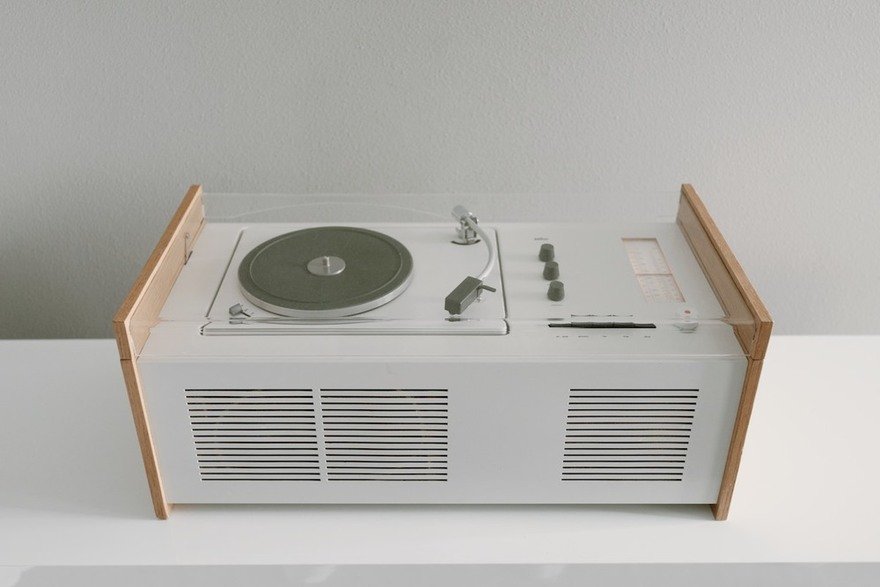 Perhaps not; with the computer desks, it seems the whole point is to display and highlight the innards. 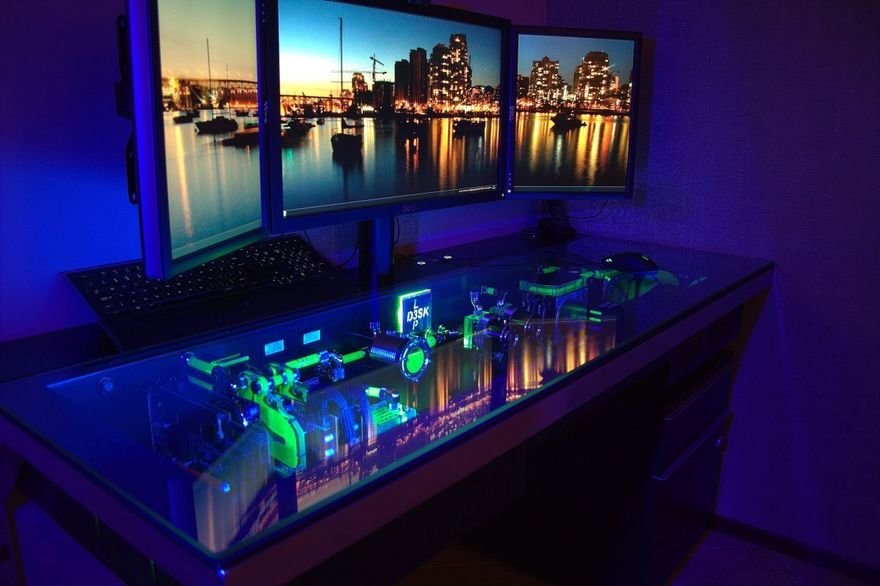 I did find one outlier within the computer-as-desk community, however. UK-based Matthew Perks, the fellow behind the DIY Perks YouTube channel, has built a large computer-desk with the de rigueur elaborate cooling system, but with a couple of departures from his peers. For one, all of the computer bits are contained within a vertical rather than horizontal mass. This enables the second departure: The desktop surface itself is a large, handsome piece of wood that can hinge downwards when not in use, providing a clean appearance. 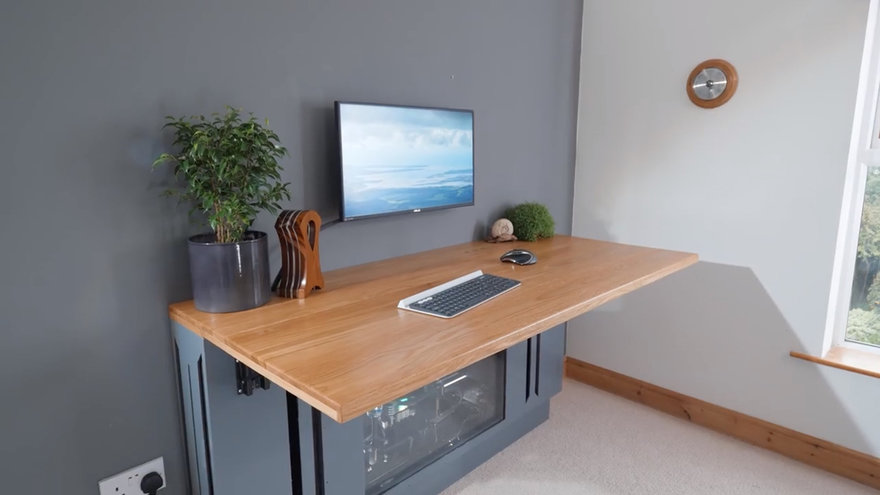 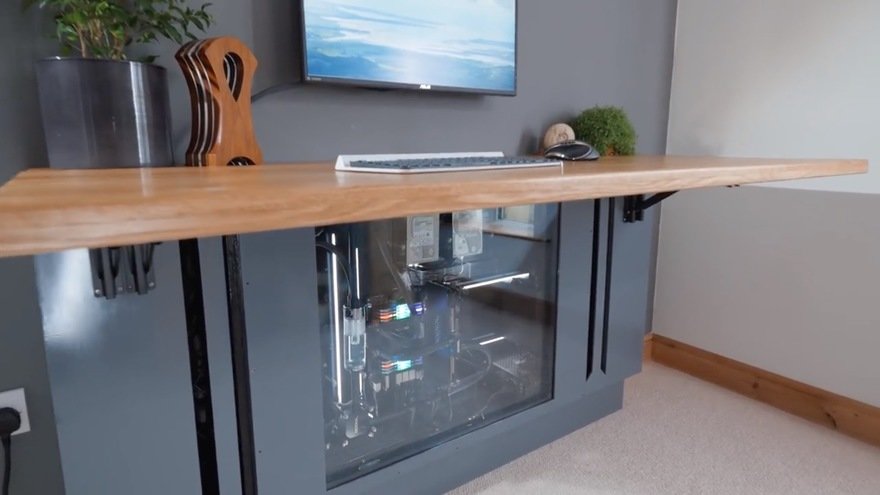 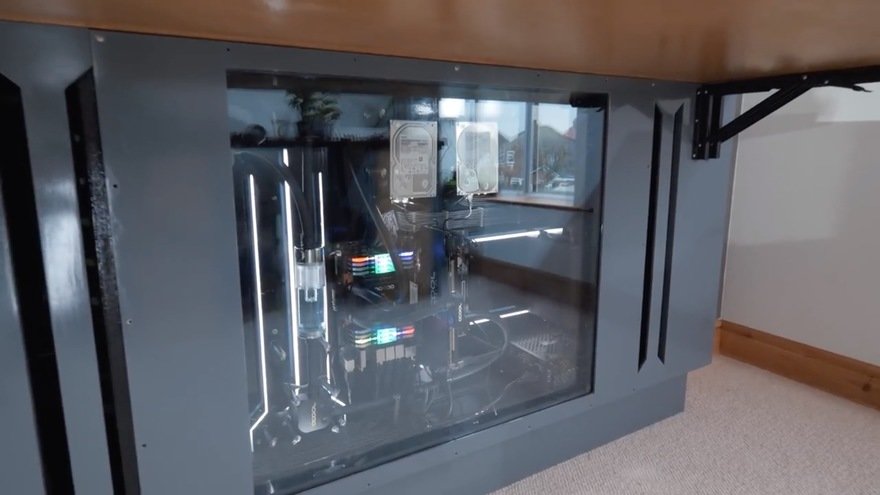 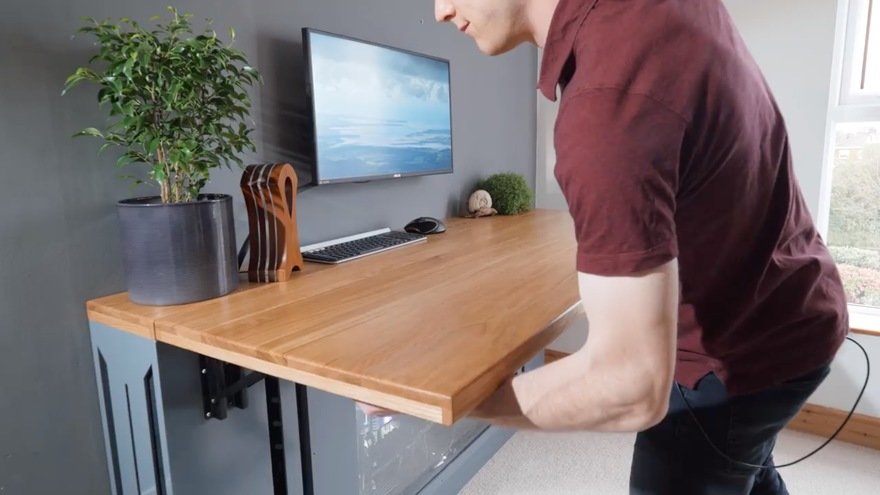 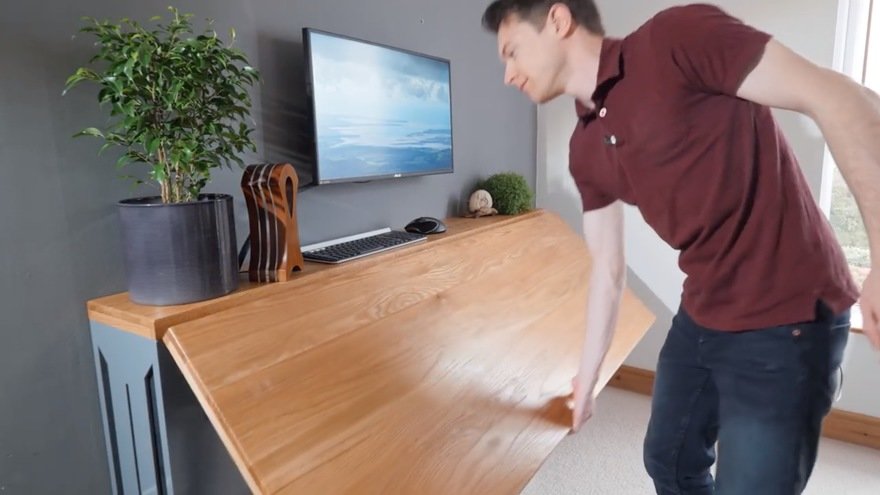 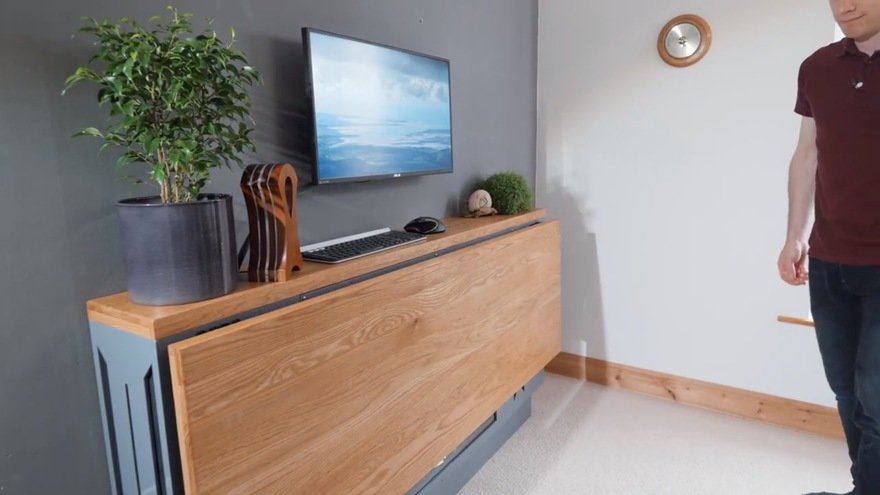 In my own experience, I rarely transform furniture that is meant to be transformed, and it usually lives in just one of its positions. But I still find this design (aside from the exposed hinges) more appealing than the alternatives.

If you'd like to see the full build of Perks' desk, along with a step-by-step explanation, it's below. (You might wanna save it for after work; it clocks in around 30 minutes.)