This Design Team is Using Legos, Stickers, and Playing Cards to Demystify Blockchain

by What The Block for Copenhagen Institute of Interaction Design

What the Block received a Notable Design Education Initiative Award in the 2019 Core77 Design Awards.

It's not that designers Cyrus Clarke and John Ferreira were necessarily sick and tired of the inundation of requests they'd been receiving to explain what the heck Blockchain is. Rather, the requests made them curious. They were struck by the frequency of hearing the same questions over and over. They quickly recognized a need to get to the root of the misunderstandings of Blockchain in an efficient way – that is, to design a system for its explanation.

Thus, they designed What The Block. Clarke and Ferreira developed the board game and workshop as a more effective, accessible way to introduce people to the Blockchain concept and technology through tangible tools and systems they are already familiar with – cards, tokens, and Legos included. 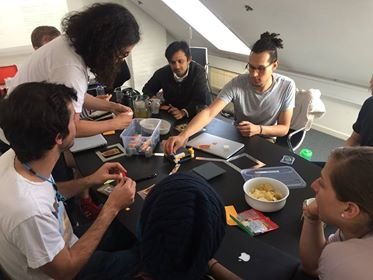 Early Prototyping
- An early prototype of the game, testing with students 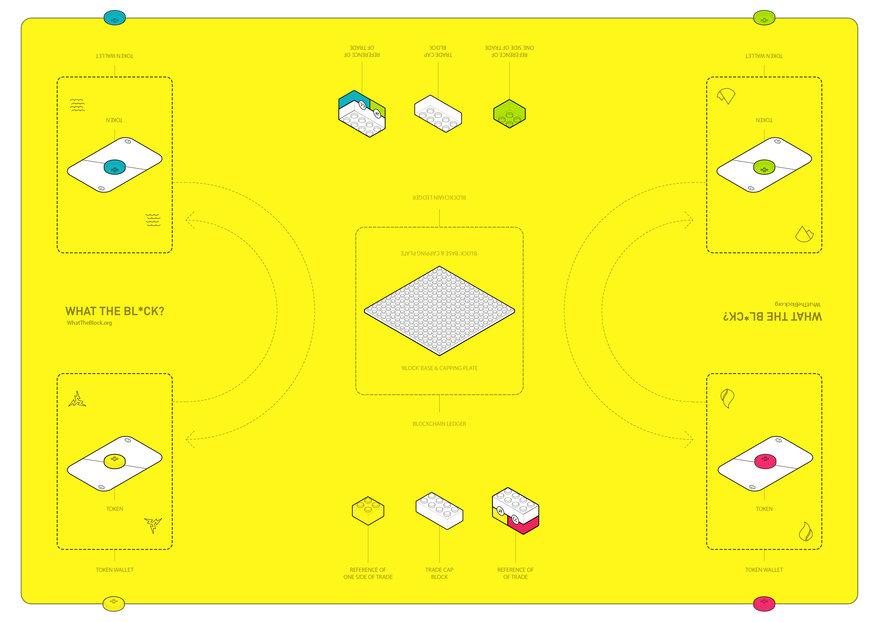 What The Block Game Board - This is the game board designed for our workshops. 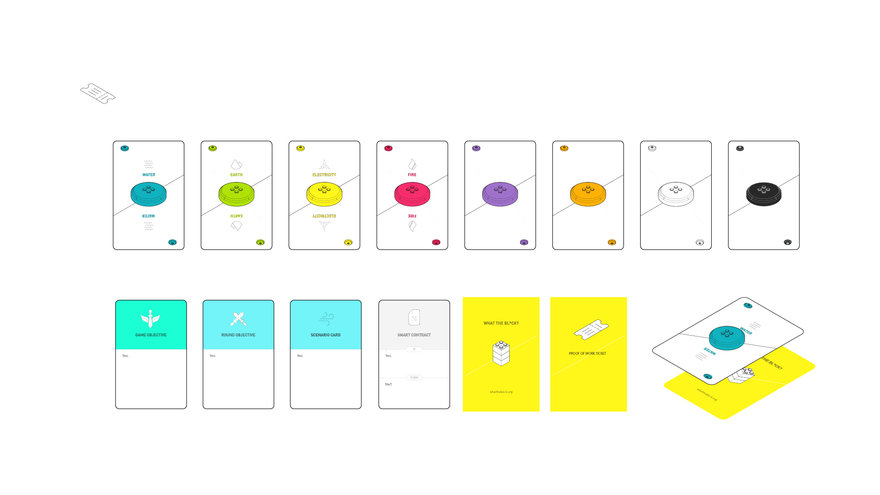 What The Block Cards - The full set of cards, including tokens, scenario cards, and smart contracts.

The designers lead the What The Block workshop, but consider it only one element of a larger, cohesive program of education and introduction, which is largely oriented around a board game. We "settle[d] upon a structure of a four-round game, with each round building upon the knowledge of the previous," say Clarke and Ferreira. The game "covers all the major concepts of Blockchain, from blocks and mining, to tokens and smart contracts." The physical game's cards, then, represent Blockchain tokens; Legos signify transactions and a Lego plate is the "ledger," which is the immutable and secure Blockchain record of transactions; stickers represent digital signatures, and the board itself is the "hub of activity," all recorded on the Lego ledger.

The game allows teams to become acquainted with Blockchain's digital technology and to experiment with the social interactions that drive it. In its third round, the workshop leaders deliver a brief lecture on the "future of value," as they call it, "to expand concepts of value from money to more abstract and less pecuniary measures." The capability for experimentation on the board continues, as the players are given more autonomy to prescribe values, mimicking the operations of Blockchain. 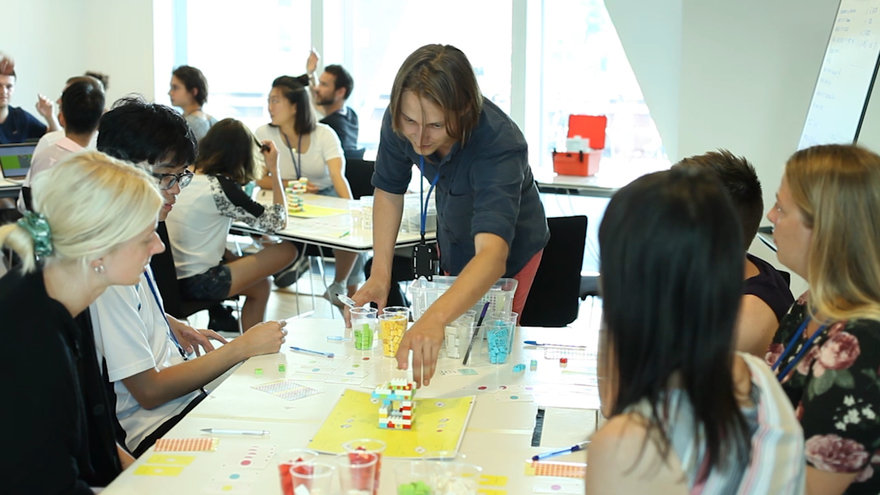 Facilitating the Game - Here we see John from What The Block, helping facilitate a trade during round 2 of the game 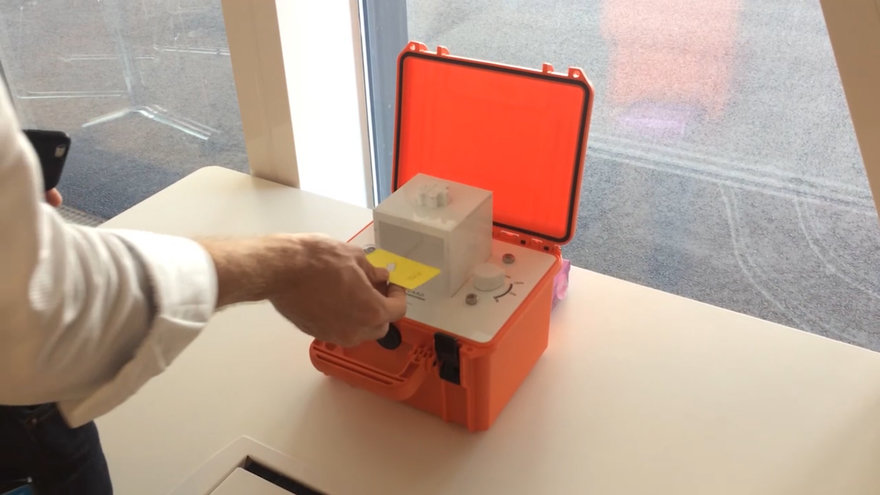 The Magical Mining Box - Winners of the mining game enter a golden ticket into this box, and receive a payout of Tokens. This mimics the rewards miners receive in reality. 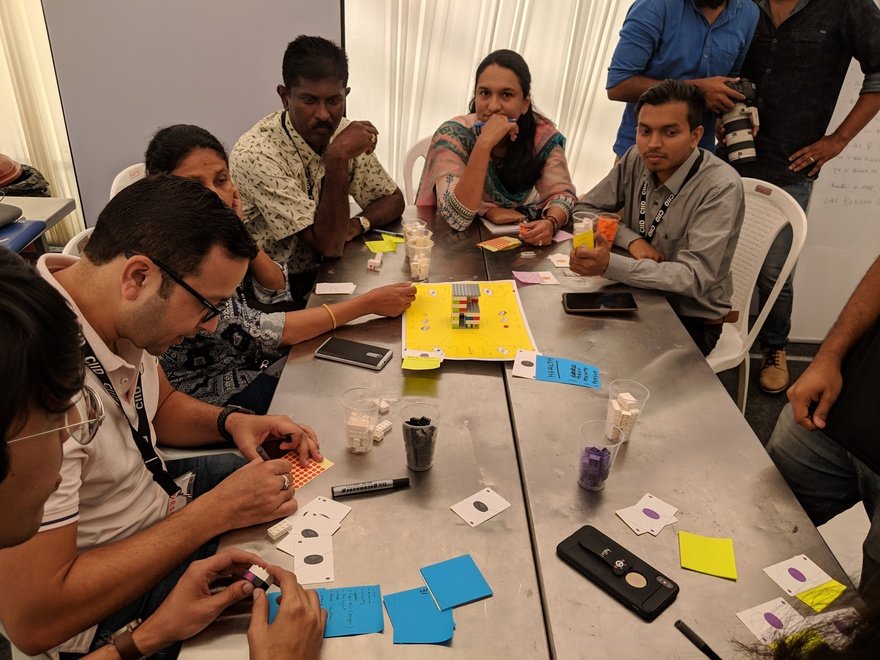 Workshop in Kochi
- Participants playing the game in Kochi, India 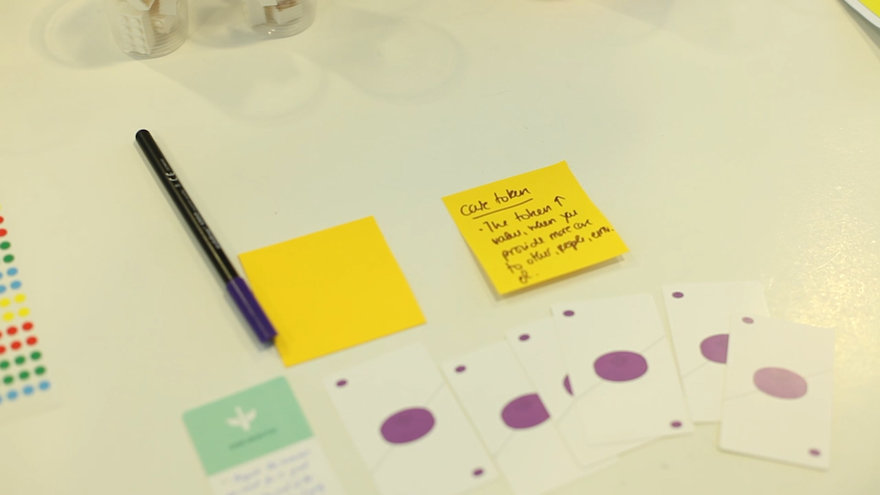 Care Token - Here a participant has created a new idea of value - a "Care Token" whose value increases as people provide more care to others. From Round 3 of the game.

Overall, what the program is facilitating is an education. The designed system relies on the understanding that tactile engagement aids knowledge retention, and uses tools like lectures, slides, and stories to support the engagement with the exploratory and explanatory board game.

Its workshops range from half-day to five-day, the longer of which culminates with participants being tasked to map out their ideas, publishing them online in a standardized What The Block template for future reference. This finishing touch grants the whole program an iterative and open source genuineness, true to its educative principles. 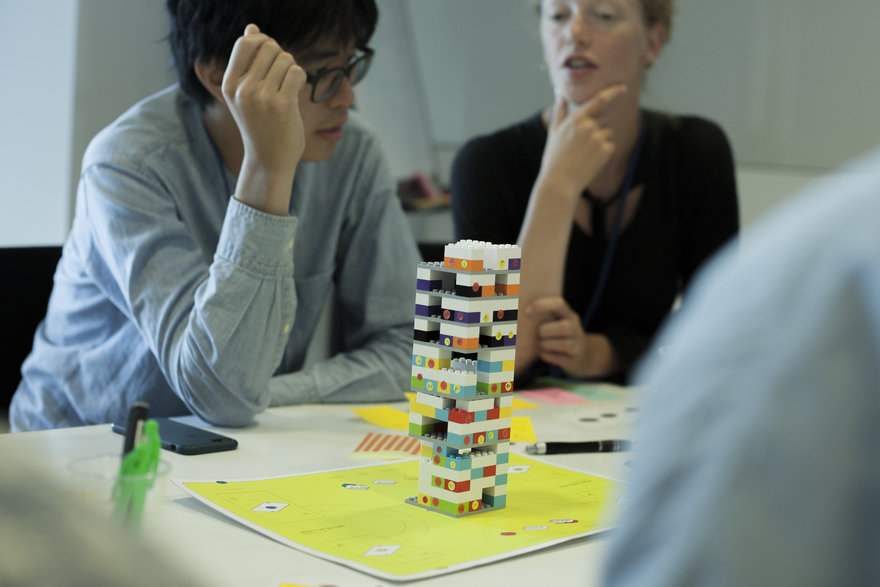 A Lego Blockchain - Image from a workshop during round 4, showing participants trading and building up a record of their activity on the Lego Blockchain 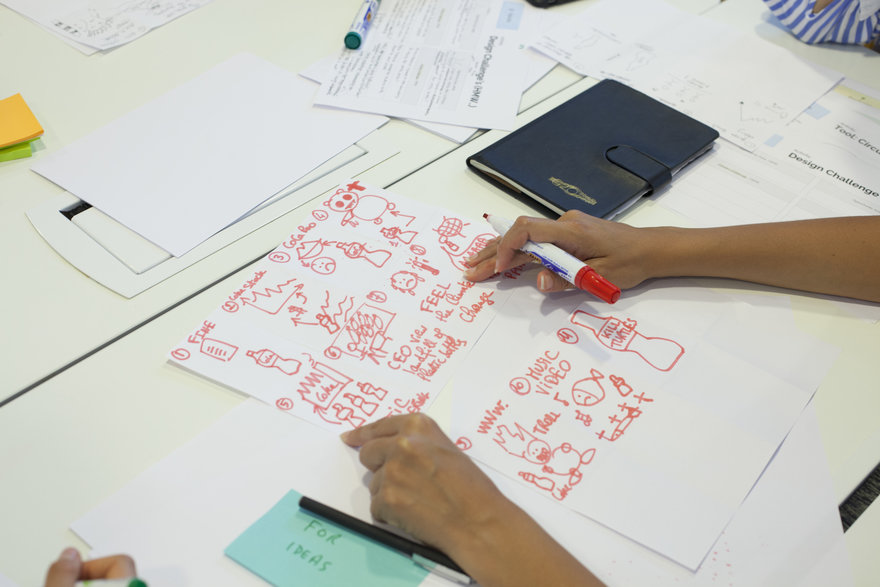 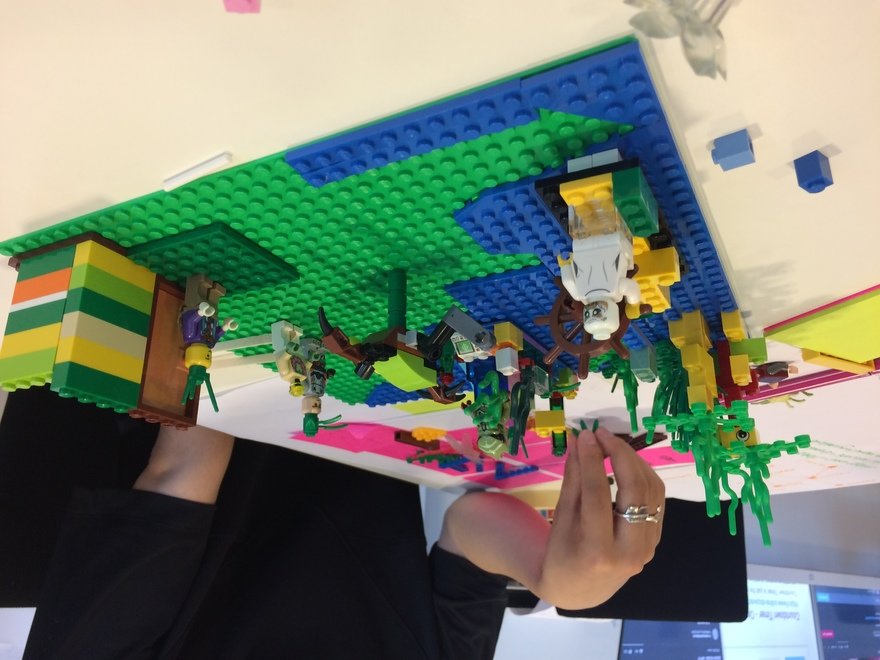 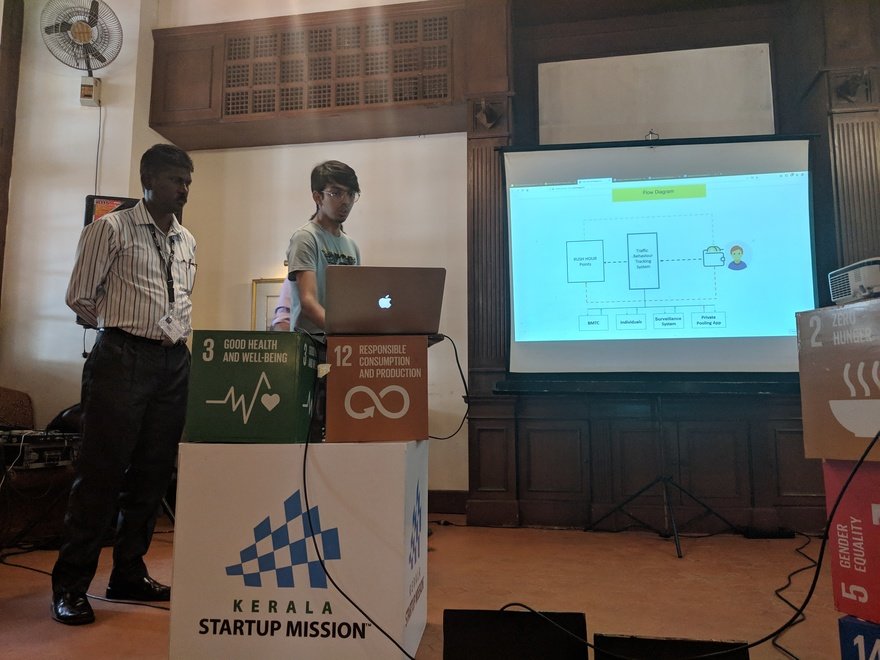 Presenting Ideas
- Workshops culminate in a presentation of concepts, deploying Blockchain to tackle a design challenge 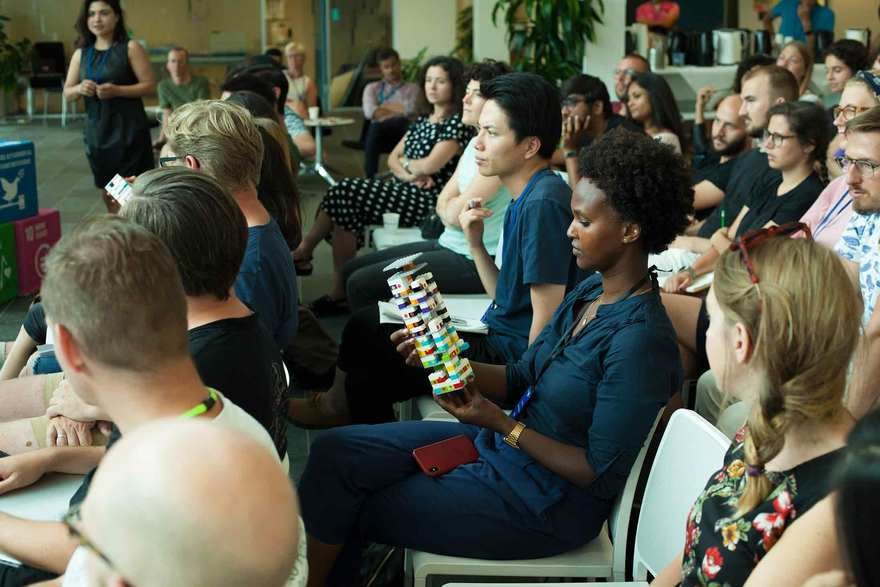 We're "seeking to use design to engage with people's pure curiosity," say Clarke and Ferreira, to "demystify a topic which many have found confusing." Since What The Block's inception, the designers have engaged people's innate curiosity all over the world, hosting the program out of various countries and communities.

What The Block ultimately offers us a much more approachable Blockchain – not to mention dreams of a world in which Legos are used to demystify the rest of the universe's obscurities. Designers, get on it!