by Yang Gao for Royal College of Art

Voice Blox was awarded in several categories in the 2019 Core77 Design Awards, including the top Student Winner prize in the Interaction category.

Mandarin, the official language of China, is spoken by over 730 million people across the world. From 2009 to 2015 alone, Mandarin education efforts in the United States doubled; and in 2014, over 100 million non-native Mandarin speakers were reported to be using the language.

The tonal distinctions Mandarin requires are incomparable to what we as English-speakers (at least, presumptively, English-readers) are familiar with. As the engineer and design team behind Voice Blox – made up of Yang Gao, Matthew Rice, Dougie Mann and Wilhelmina Crolius – has described, Mandarin is tone-sensitive; that is, its words are each characterized by one of four tones, which then signifies its meaning. "For non-native Mandarin speakers, achieving accurate tonal variation and accent is a big challenge," they say, citing being able to aurally recognize your mistakes and shift your pronunciations, the lack of intelligent technologies, and the difficulty of access to good language instructors as a few of the roadblocks to successfully learning Mandarin. "We are creating the first engaging, hands-on experience of practicing speech, based on the untapped strength of multimodal learning." 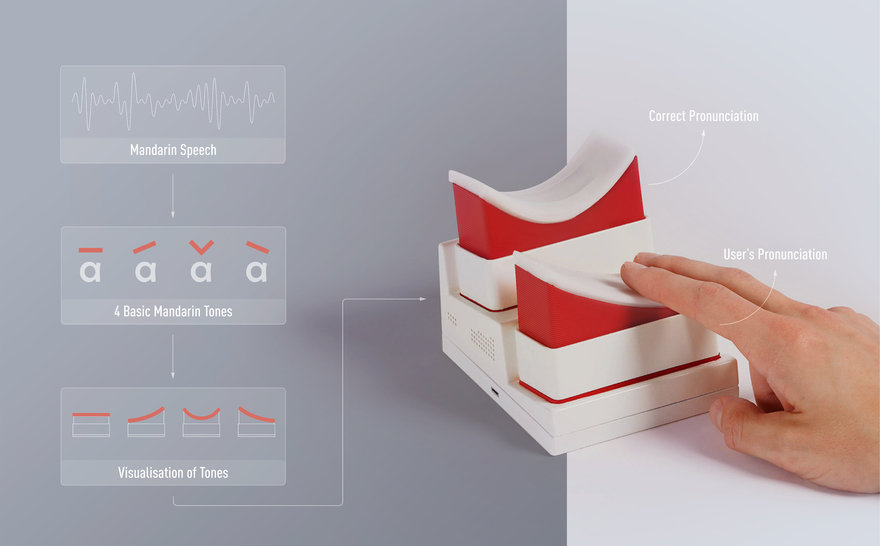 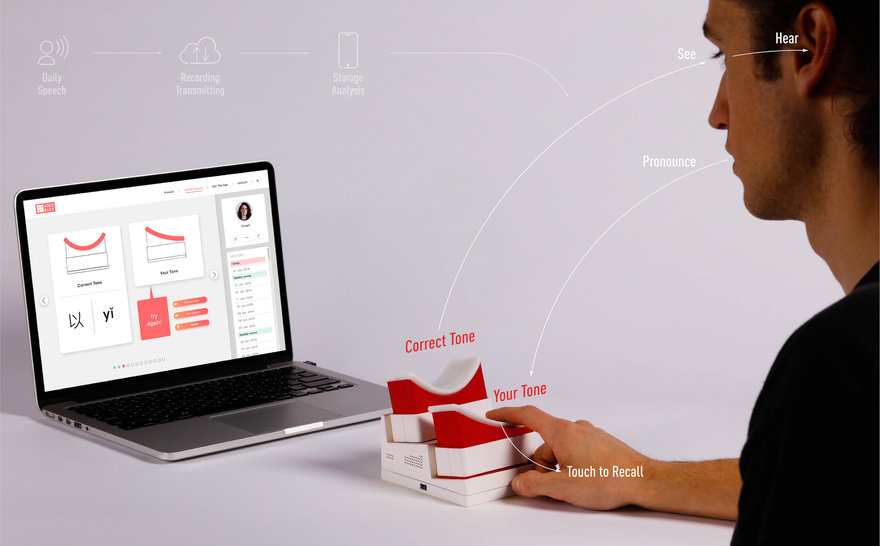 Voice Blox, the learning language tool the team designed, allows users to explore their accents with their hands. Not currently employed by classrooms (digital or physical), the multimodal, haptic learning system is the first of its kind. "Using simple shapes to guide a learner's hand," the interface "capitaliz[es] on the close connections of the auditory and motor networks of the brain," embodying pronunciation in a simple, physical form.

Through an analog, two-block design, speakers can easily and immediately compare ideal pronunciations with their own, concurrently self-correcting by comparing the two tactile blocks in order to at once see, feel, and hear themselves relative to correct tones. 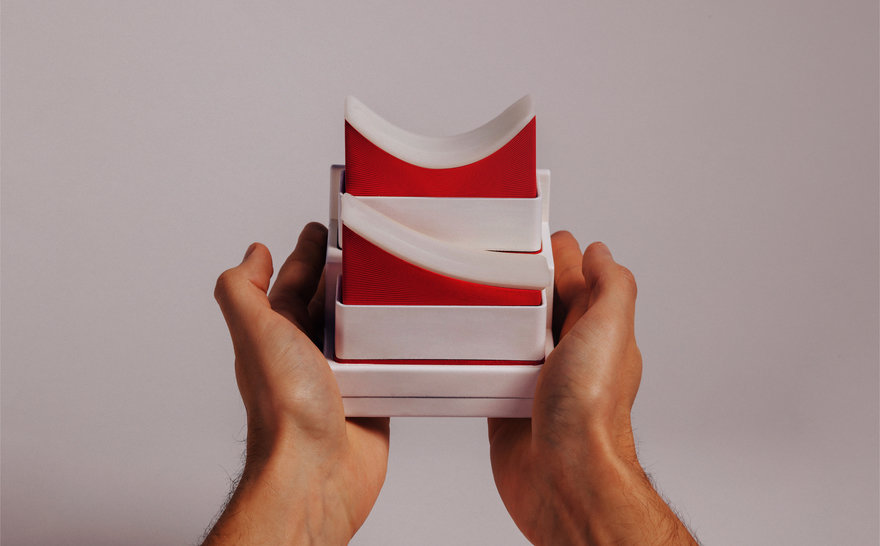 As Mandarin becomes increasingly relied upon to communicate in the international business sector, the designers recognized that quality education on a larger scale will be required to keep pace. "We are in the process of fitting our functional technology [to] a single consumer product," the designers say, and have plans to integrate it "with a software-based curriculum.

Themselves a multinational, multidisciplinary team, Voice Blox's engineers and designers (a native Mandarin speaker among them) are final-year students in the double masters program Innovation Design Engineering at the Royal College of Art and Imperial College London. By the time they graduate, the numbers of Mandarin speakers across the world will be higher, and the need larger for better instruction of the increasingly global language. 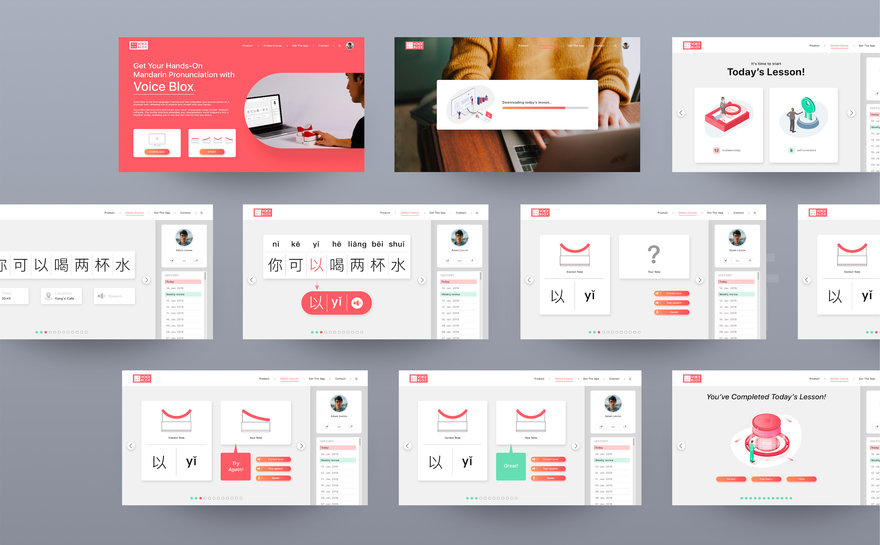 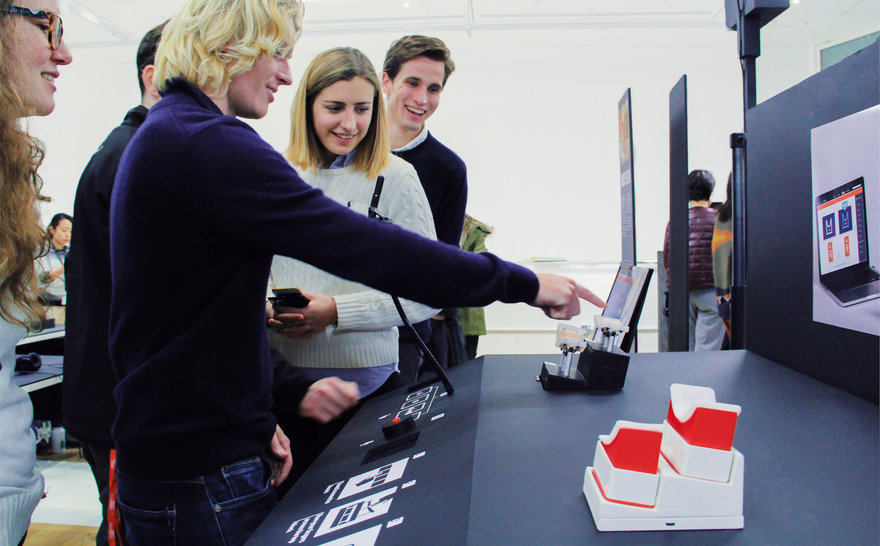 Voice Blox's prescient use of design to facilitate this education leaves us, ironically, speechless in admiration.