If this is the future of booze, I don't want nothin' to do with it

Most of my friends think this is crazy, but I refuse to drink hard liquor in cocktail form. If I'm drinking Scotch whisky or regular unleaded whiskey, I'll do a piece of ice; if it's gin, the craziest I'll go is that drop of vermouth. Anything else I either drink straight or not at all.

This has nothing to do with hard living, and everything to do with honoring people's creations, and the history of the cocktail. Cocktails became popular during Prohibition because people had to drink bathtub gin. It tasted so bad that they had to dump sugar and fruit juices into the stuff just to make it palatable.

Then the booze ban was lifted and we could get the good stuff again--but people had gotten hooked on disguising booze as a kiddy drink. To me, drinking a cocktail is like throwing a cheap sheet over a nice Mid Century Modern chair--you can't enjoy the form of what the original creation was. There are families that spent centuries getting their malts and blends just right, and now you go dumping pomegranate juice and chocolate milk into it?

Here's another weird one: Scotch is a booze that's meant to be savored, you can't enjoy it if you shoot it, slam it or guzzle it. So I'm puzzled that Scotch brand Glenlivet has created a special blend that they're serving in capsule form.

They've wrapped the booze in a sachet made out of seaweed (I hope they at least managed to get rid of the seaweed flavor). At 23mL per "dose" that's less than an ounce, or about half of a shot, so I suppose it could be likened to a large sip; but isn't part of the romance (for lack of a better word) of drinking, well, the drinking part? Isn't it preferable that you can control the amount you sip, rather than taking a pre-measured dose? 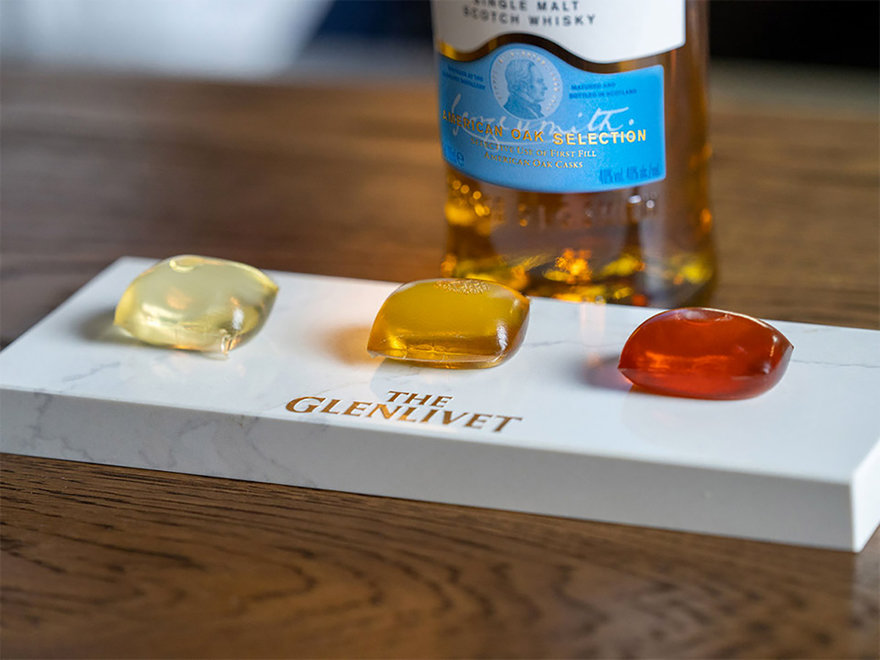 In the bar of the future, you walk in and the bartender is wiping down these marble tablets

Call me a Luddite, but I'll stick with liquid in glasses. These things look like "get drunk pills" to me.