These would not exist in an asshole-free society

"Future of Transportation Designs" concepts, be they monorails, scooters, mag-lev trains, bike shares or autonomous cars, no longer hold any personal interest for me. Those things are mostly designed with cities in mind. Out here in the countryside, the population is spread far apart and the only way to get around is by car. With no cell service on our farm, I can't even get a nav signal until I'm a couple miles away.

Some of the driveways here are short, and you can see the house from the road. Other driveways are long stretches of gravel that twist out of sight, and you only know there's a house at the end because there's a mailbox at the front edge of it.

A lot of times it's easy to miss a destination here, even when the nav is working. And when you overshoot, you need a safe way to turn around, which isn't easy on a twisty country-two lane. If there's no visible traffic you can try risking a three-point turn, but there's no guarantee that a logging truck isn't going to come barreling around the bend when you're in the middle of it. So I prefer to keep going until I see someone's driveway, then use it to turn around, as it's marginally safer.

But some houses have signs like these prominently displayed in their driveway:

Additionally, some of those houses pair the signs with NO TRESPASSING signs, to really drive the message home.

Upon first seeing these, I asked my wife about them and she suggested it's just a way to express hostility. I was surprised that people would be willing to pay for, install and have to look at such ugly signs as they return home from work each day, but some folks are angry people, I guess.

I've also noticed that it's only the short-driveway houses, visible from the road, that seem to have the signs. Down here, in general, Long Driveway = High Tax Bracket, Short Driveway = Low Tax Bracket.

Anyways, I just came across this thing online: 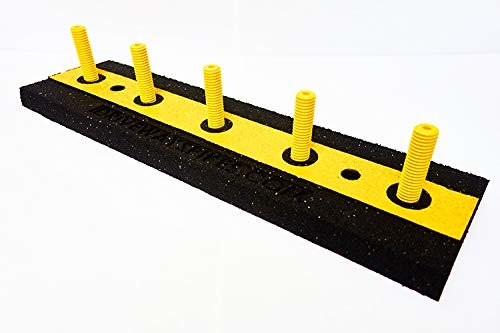 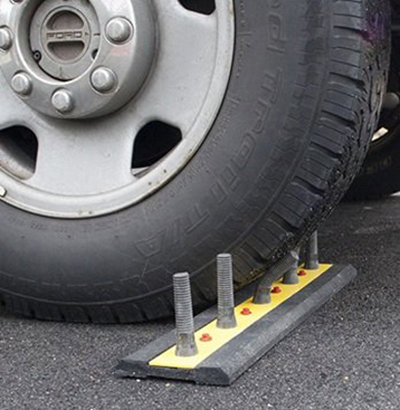 That's a high-visibility, fake tire spike strip made of rubber that you're meant to place at the end of your driveway. Because it's just flexible rubber you can drive over it without damaging your tires, but it's meant to fool would-be turner-arounders.

One five-star review states "works like a charm! no more invaders driving into my driveway!

Another said "Finally, a product that caters to sociopaths!"

Yet another wrote, apparently in earnest, "This is exactly what I needed for those darn driveway u-turning people! The gall of some people, using fifteen feet of my driveway without paying rent or even asking, just because they were 'lost' or 'missed' their turn! … The camera I installed five years ago allows me to enjoy te (sic) expressions of frustration and fear when these monsters roll into my driveway 'by accident'."

Upon reading these I thought geez, I haven't seen a product design this passive-aggressive since those knee defenders for airplane seats.

However, there were also some more reasonable reviews from people experiencing issues I hadn't thought of, like the following:

- "Great, safe product. Finally found something to keep delivery drivers from endangering the safety of my dogs in the yard."

- "These really did the trick in tutoring our mail delivery person from patching out our front yard which he had been doing despite notes and other reflectors that attempted to show him the edge of our yard."

- "These are AMAZING! We live the (sic) first house passed (sic) a major attraction with poor signage. We had 50+ turn arounds a day. We have a circle driveway as well so people were turning in and then driving around our cars across our grass! The final boiling point was when someone turned in and nearly hit our daughter on her bike. We have had the driveway spikes for 2 and 1/2 years and not one person has tested them and drove over them."

Okay, so it seems not everyone with no-turnaround devices is simply expressing hostility. But make no mistake, this product exists because assholes exist, on both sides of the driveway. If you go to the trouble of installing a camera just so you can see "expressions of frustration and fear" on people's faces, I think you need to start smoking pot. And if you drive across someone's lawn, especially when there's children or pets around, you need to stop smoking pot.

I imagine products like these, along with that Knee Defender, will only continue to proliferate. Maybe Kickstarter should add a "passive-aggressive" category.