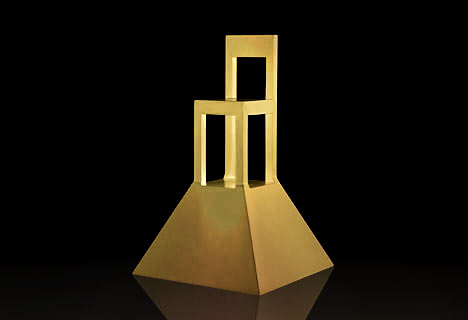 What's experimental in a Flat World? A fragrance by Zaha Hadid. Jewelry for Tiffany's by Frank Gehry. Self-help books for hipsters by Karim Rashid. Signature designers had arrived in the luxury market long ago and by now it's ordinary. Radical or poetic form, once considered experimental, is the not-so-secret weapon of modern brand building. Where design once served industry, now industry often serves design. Here Design meets Art meets Fashion meets the Devil-wears-Prada Catch-22 of a culture industry starving for new icons and rocket-fueled by a viral Web. If the world is flat as Tom Friedman claimed, then so is design--stripped of the hierarchies that used to distinguish high and low, design and art, theoretical and applied. Has this newfound freedom produced wild experimental design thinking? Not enough. Instead, design's intellectual edge has been mostly employed by the vanities of a fashion system. Someday we may recall this period as design's fashion phase. Is it finally time to revive experimental design thinking from this fashion hangover?

"If the world is flat as Tom Friedman claimed, then so is design--stripped of the hierarchies that used to distinguish high and low, design and art, theoretical and applied. Has this newfound freedom produced wild experimental design thinking? Not enough."

It's not that fashion is bad, or unimportant. Design's marriage to Fashion was fated and permanent so that beauty and design storytelling are here to stay. It's just that it's not so experimental any more. The honeymoon is over. It's as if Memphis never died, and instead is continually reincarnated in an aesthetic economy endlessly hungry for new styles, with plenty of colorful characters ready to exploit new aesthetic markets. Outside this fashion system there are plenty of juicy design issues that deserve experimental exploration in search of new modern meanings. Experimental design is the way that design comes to know itself better and to advance its potentials. It's the way the field of design moves forward. Design has absorbed fashion. Uncharted waters await.Honeymoon in Memphis: The Path to Fashion To get the full picture, let's trace the design/fashion courtship. Design's path to fashion is best illustrated by the life of one remarkable man, design giant Ettore Sottsass--the recently-departed high priest of the Memphis movement, design's last great theoretical experiment. Memphis infamously questioned Design's relationship to Art and Fashion, to propose a new modernism that would adopt the wild energies of the information age--a TV culture full of instant images, a radio screaming rock 'n roll. The Memphis group didn't spawn a design fashion system, they simply announced its inevitability. They made their point and quickly disbanded.

It's important to understand the intellectual energy that drove these works. To sum up his LACMA retrospective, our Italian design guru, at 88-years-old, claimed he is not an industrial designer but a ''theoretical designer--like Einstein is a theoretical physicist.'' Einstein made physics about physics. Sottsass made design about design. And he built a practice around these ideals, engaging some projects for big clients, some one-off 'statement' pieces to live in a gallery as a reflection on design. As with Memphis, he continually demonstrated that couture design is a valid format--a pure space of continual research, driven by cultural questions without the need for market validation. Through his travels, his writing, and his prolific and varied body of work, Sottsass embodied a true spirit of 'research' that makes design an agent of new culture.

"Some design became famous for being famous, rather than famous for being good. With this model, the Design Star was born--equal parts designer, artist, personality, spectacle-maker, and marketing tool."

When recently asked about his Memphis pieces fetching five figures at auction, he replied 'To look for something that doesn't exist is always very expensive...In those years also our blood was expensive.' Thanks partly to big thinkers like Sottsass and his polemical comrades, design today is a new game that welcomes diverse ideas. Ettore inspired a new wave of design authorship in the networked world. Sprung from Milan, the fashion capital of the world, Memphis taught Design to respect Fashion--and while Modern purists balked at Memphis as a post-modern prank (some polemics are) a choir of young designers, from Droog to Urquiola built this experimental energy into an expanding array of diverse voices.

Design Stars in a Culture Industry In the late 80's, Phillipe Starck quickly and decisively answered Memphis' call by strategically building a commercial empire selling signature form to cultured yuppies. Objects became media-friendly and eccentric images, the style press rewarded such images with valuable PR, and many designers jumped on the wagon, responding with stylized iconography to signify their point of view. Some design became famous for being famous, rather than famous for being good. With this model, the Design Star was born--equal parts designer, artist, personality, spectacle-maker, and marketing tool. Today, a new Zoolander-esque design market has emerged that often favors sensational signature forms over contextual concerns. In the most extreme cases, the Design Star's iconographic signature becomes the context for every project, like a stylistic virus.

Design is Flat, the Market is Sophisticated and Extreme Consequently, 'High Design' is no longer an exclusive club that turns up its nose at consumerism. Conceptual, poetic products have found their way to every price point in the market. Where student dreamers used to push the market with experimental thinking, now the market moves faster than student imaginations. Ideas, forms, and paradigms move fast in a networked environment, quickly revealing the difference between easy trends and authentic authorship. Now 'authored' design must answer highly specific questions with researched answers, dead-on form, and a good bit of self-promotion, to rise above the din of a sophisticated market. Aspiring theoretical designers compete with deep-pocketed culture-making armies like Apple, Google and Alessi. Muji guru Kenya Hara claims 'Design is not the act of amazing an audience with the novelty of forms or materials, it is the originality that repeatedly extracts astounding ideas from the crevices of the very commonness of everyday life.' That idea rings loud and clear throughout every aspect of Muji's 'quiet' product line. The market has adopted a sophisticated aesthetic rhetoric: persuasive arguments for poetic minimalism, or Pop-flash, or moral green, or old-school functionalism are demonstrated with masterful execution on a regular basis. Design has matured in its methods, and diversified in its subjects, often to build new markets with aesthetics.

"Where student dreamers used to push the market with experimental thinking, now the market moves faster than student imaginations. Ideas, forms, and paradigms move fast in a networked environment, quickly revealing the difference between easy trends and authentic authorship."

Design maverick Tom Dixon this month in Metropolis magazine after introducing a new line of furniture in America--"designers should take a lead from the publishing and music businesses--you need a brand or label so people can recognize your own personality and point of view." A fashion-industry model is the established method for building an audience in the web-enabled market. Welcome to the MySpace era of design. 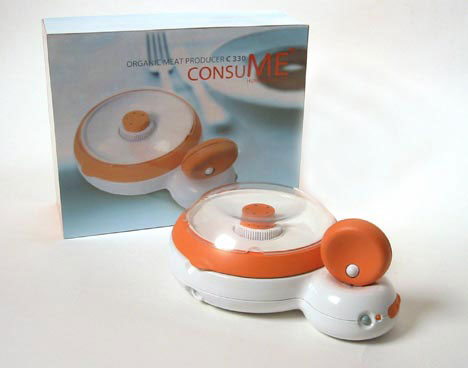 It's evident that industrial design is no longer merely a service to industry. It can have it's own point-of-view. Design has built its own stories, unapologetically, sometimes to vulgar extremes. When parts of the Milan Furniture Fair are described as a circus spectacle, then it's obvious that the Memphis 'experiment' has answered it's 25-year-old question: Form IS function. And the market loves it.

High Design meets High Art. In 2005, Design Miami galvanized this new market as an annual 'nexus for the far-flung global community of cutting-edge design dealers, collectors, creatives, curators, and critics' with a round-up of 'limited-edition, experimental and historically significant design work.' A market for significant design rarities already competes with the art market. Dealers at Design Art London announced last year that Newson's Lockhead Lounge sold for $2.5 million. Call it a high-design indulgence for the super-rich. Or call it a blank-check playground for couture design research.

Design has always had a difficult relationship with the gallery. Will 'Design Art' simply lead to more style wars for the luxury market? When it's put on a pedestal, as an idea, does it stop doing what design does best--enabling meaning through use? Isn't design more powerful in the streets? Where does the idea end and contextual use begin? And who would suggest that ideas aren't useful? Is design culture better-off with this new complexity? Absolutely. As 'design about design' enters the mainstream, it forces specific critical questions about the boundaries between art and design, asking us to be ever-more specific about what needs and whose needs we're serving. Cultural critics will have fun distinguishing these categories of art, fashion, and design for the next few centuries, but will experimental design ever move past the 'Memphis thing'? 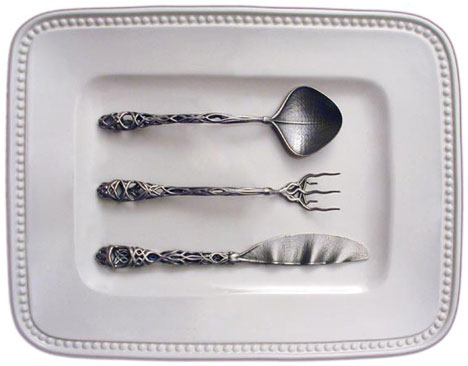 Beyond Fashion : Conceptual Experiences, New Hybrids While signature form continues to grab headlines in the style press, the principles of 'experience design' suggest a way forward for conceptual design research that is much more grounded in experimental modern contexts. Experience design points past gymnastic forms to rigorously explore the complex social, economic, and psychological problems of modern change. The new MOMA show 'Design and the Elastic Mind' points directly at the need to provide 'successful translation of disruptive innovation'. It forces us to take a deep look at new relationships between technology and emerging behaviors--interpreting technology into meaning. Here the emphasis can shift from objects toward systems and their effects. Most likely, tomorrow's best conceptual thinkers won't emerge from a single, established discipline. They will build strategic, informed links BETWEEN disciplines, like art and science, creating new hybrids. Today, if any realm can claim the conceptual high ground of design research, it is interaction design--the perfect intersection of objects, systems, and social behaviors. Interaction design has become a separate branch of design discourse, a friendly sibling of industrial design with it's own unique vocabulary and community of practice. IAD contains a universe of new theoretical questions that promise to transform daily experience. As physical stuff is enabled by networked data, a world of new experiences and cultures open up, along with the anxieties and fears triggered by accelerated change. Who will be best qualified to explore these concepts? Architects? Object makers? Interface makers? Social scientists? And which of these is likely to build a truly human poetics of interaction? Pioneering hybrid thinkers, and hybrid teams already begin to point the way.

Reviving the Unknown Design has arrived. The world is Flat. Form is function in a sophisticated market. We understand our present by clearly seeing the past and we push forward to make sense of the weird air we now breathe. Theoretical design has always helped us to give shape to change. It's time to give a new shape to theoretical design, and has there ever been a time in history more urgently in need of new ways of interpreting change?

Will there be a Sottsass of your generation? If so, she's not likely to look anything like Ettore, and she won't represent the same old-school definitions of industrial design, but she will have one thing in common with this great pioneer of experimental design: she'll have the same relentless courage to look for something that doesn't exist.

Scott Klinker is Principal of Scott Klinker Product Design and 3-D Designer-in-Residence at Cranbrook Academy of Art in Bloomfield Hills, MI. His furniture designs are available through Design Within Reach and Unica Home. He is an alumnus of Cranbrook and IDEO.