So far, they've only been able to create small objects, no bigger than the size of a die

3D-printing glass hasn't gotten much easier over the years. The few researchers who have attempted it so far rely on two, inherently problematic techniques. Printing molten glass is technically possible, but it requires extremely high temperatures and expensive, heat-resistant equipment. Another method is to use powdered ceramic particles that are printed at room temperature then sintered to create glass, but this approach can only yield very simple objects. Researchers at ETH Zurich's Complex Materials group recently developed a new way of creating highly-complex glass objects that relies on a special resin that can be cured with ultraviolet light. 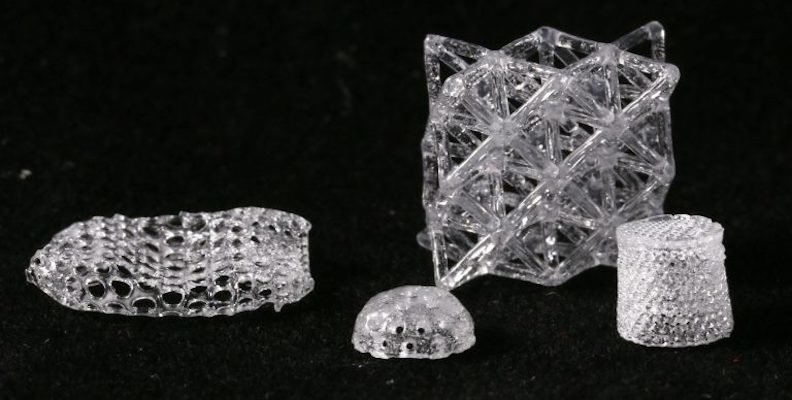 For this alternative method, the team looked to stereolithography, one of the first 3D printing techniques developed during the 1980s. They developed a special resin that contains a plastic and organic molecules to which glass precursors can be bonded.

They explained the technique further:

"The resin can be processed using commercially available Digital Light Processing technology. This involves irradiating the resin with UV light patterns. Wherever the light strikes the resin, it hardens because the light- sensitive components of the polymer resin crosslink at the exposed points. The plastic monomers combine to form a labyrinth-like structure, creating the polymer. The ceramic-bearing molecules fill the interstices of this labyrinth."

The structure can even be modified by adding silica with borate or phosphate into the resin, resulting in different types of glass. The final step is to fire the object at two different temperatures: First at 600°C to burn off the polymer framework and then at around 1000°C to densify the ceramic structure into glass. "During the firing process, the objects shrink significantly, but become transparent and hard like window glass," they explained.

So far, they've only been able to create small objects, no bigger than the size of a die. Creating large objects like bottles, glasses, or even window panes with this technique is still far out. The team emphasizes that their goal in the early stages of the project was simply to prove that 3D printing glass was a feasible pursuit. They've since applied for a patent and are in negotiations with a Swiss glassware producer who is interested in using the technology.