Office designed for the unclumsy 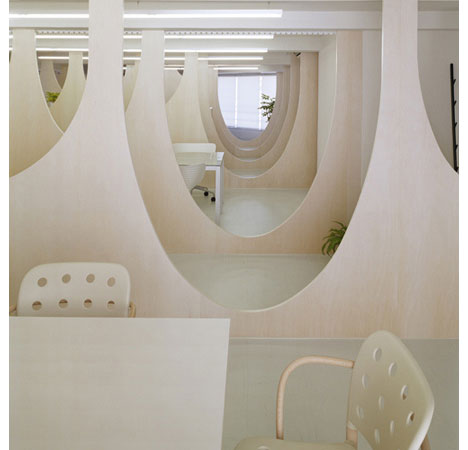 This Nendo-designed office space in Tokyo is divided by a series of low-dipping partitions you have to step over...like you're in a submarine. Was it designed for flooding? To stymie Roombas? Prevent rollerblading? According to the designers,

We wanted the usual spaces and functions--meeting space, management, workspace and storage--to be separate, but also to maintain a sense of connection between them.

To achieve this effect, we divided the space with walls that seem to sag and flop like a piece of cloth held up between two hands, enclosing the various spaces more than the usual office dividers, but less than actual walls.

Employees can move between spaces by walking over the parts of the walls that "sag" the most, thus emphasizing the contrast between the uses of the different spaces.

Spaces that need more sound-proofing are enclosed with the kind of plastic curtains you might find at a small factory so that people can work without worrying about noise but not feel isolated. When you stand up and look through the whole space, people, shelves and plants seem to appear and disappear as though floating between the waves. 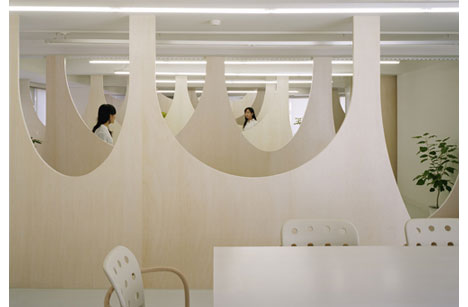 Perhaps it was also intended to weed out potentially clumsy employees: if you trip during the job interview, "We'll keep your resume on file."

Office designed for the unclumsy