If people misuse products, who's to blame? 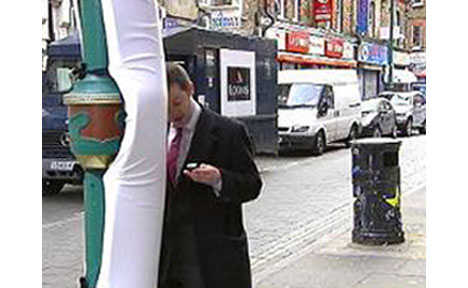 "If you design a car, someone will use it to rob a bank," one of our design professors used to say. His point was that you can't worry about how people might misuse a product you design.

It's possible a UK charitable organization doesn't share his point of view; they are allegedly sponsoring an experimental program to pad lightposts so that text-messaging pedestrians who walk into them don't hurt themselves. We're hoping that this is a gag--though the original source attributed the program to the London branch of Living Streets, nothing on their website corroborates this.

This may remind you of the news from a year ago, when a few NYC pedestrians were hit by cars because they were too busy engaging their iPods and yapping on cell phones. Senator Kruger (NY's other Senator, remember him?) proposed a crosswalk ban on the devices, which thankfully came to naught.

And according to the FBI, bank robberies increased 4% from 2005 to 2006, the last years for which statistics are available. Perhaps we'll see more padded lightposts in the future.

If people misuse products, who's to blame?