There was no shortage of wearables showcased at CES 2020 in Las Vegas, but only one –– claims Apollo Neuroscience Inc. –– that uses finely tuned vibration frequencies to calm or energize you, or improve your recovery from stress.

The young Pittsburgh firm, co-founded by the husband-and-wife team of Kathryn Fantauzzi and Dr. David Rabin, turned to nearby Bally Design to come up with the look and feel of a high-end wearable device on just a fraction of the budget often devoted to such matters by giants such as Apple or Fitbit.

Bally's lead designer on the project, Gregoire Aby-Eva, said the fact that the device is designed to be worn on either the wrist or ankle added another layer of complexity to the concept, given the potential variance in sizes needed. The band needs to fit snugly on the body, so that the gentle vibration waves transmitted to the bone have the desired effect.

In an interview at CES, Fantauzzi and Rabin explained the genesis of the project and how the device works. They spoke on the booth of Covestro, which was displaying the Apollo. The Germany-based supplier of advanced materials, which makes its North American headquarters in Pittsburgh, collaborated on the project and supplied the polycarbonate blend resin used in the body of the device.

The Apollo has seven modes, which the user manages from an app. Some are designed to calm you down while others aim to re-energize you by helping restore the body to its natural equilibrium. The various programs are said to help the user do everything from increase energy and accelerate recovery to deepen relaxation and promote sleep. 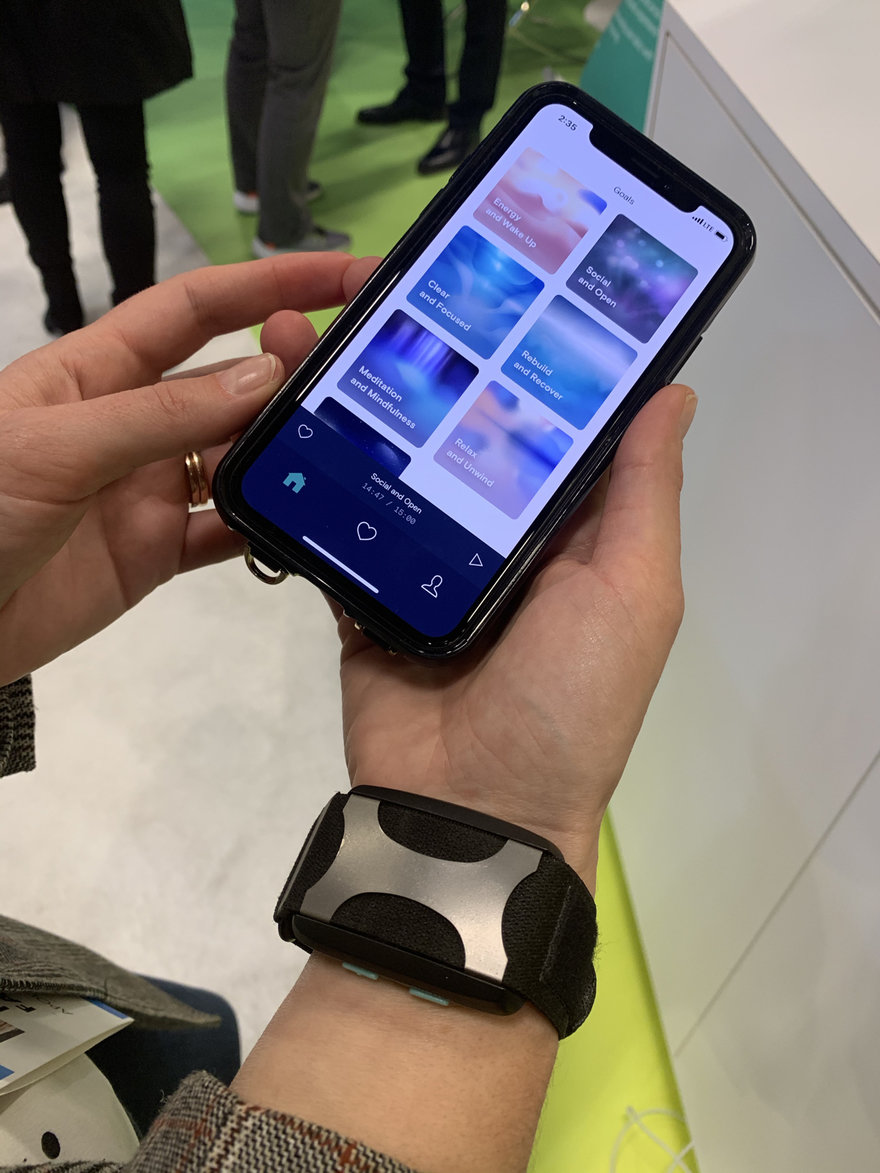 The company has done five years of research, in addition to university trials and 2,000 real-world tests, including double-blind, random, placebo-controlled trials. The results have been very positive, with eight out of 10 users reporting up to 25 percent improved performance, according to Rabin.

Rabin is a board-certified psychiatrist and neuroscientist who received both his Ph.D. in neuroscience and M.D. in medicine from Albany Medical College. He has concentrated on working with military veterans and other patients with treatment-resistant conditions such as post-traumatic stress disorder (PTSD), depression, and substance-abuse issues. In his work, he says he discovered that when patients were in a calm, safe environment their physiological markers of stress improved, their mood got better, and they were better able to focus and manage their symptoms. 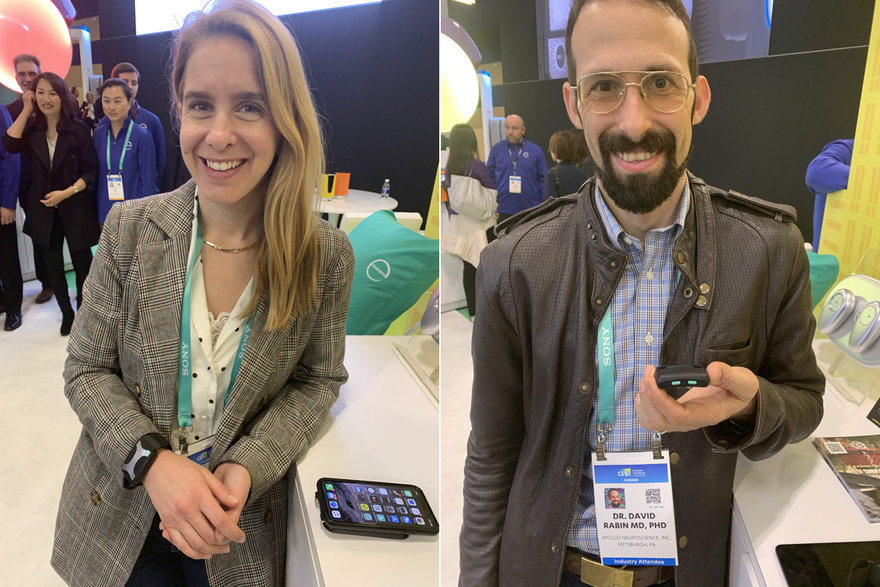 Apollo Neuroscience founders Kathryn Fantauzzi on the left, and Dr. David Rabin on the right.

Rabin is also a musician who plays trumpet and piano, and he says music has always served as a sort of therapy for him. He wondered why that was, and noted that gentle vibrations at certain "touch" frequencies (generally from a fraction of 1 Hz to 200 Hz) replicates the patterns of meditation. "The body," he explained, "recognizes the signal of safety and sends a signal to the mind, which calms the body."

The Apollo technology, whose gentle vibration waves signal safety to the body and improve heart rate variability (HRV)––a key metric of health and recovery––all through the sense of touch, originally stemmed from Rabin's research with physician and neuroscientist colleagues at the University of Pittsburgh.

Since the Apollo is directly worn on the wrist or ankle, it needs to be able to withstand exposure to detergents, lotions, and perfumes, as well as drops and daily wear and tear. Covestro LLC's Makroblend® M525 PC/polyester blend was chosen for its ability to deliver durability and chemical resistance at a light weight. It also did a good job of transmitting the vibration waves, Aby-Eva said, noting that the material also offered the waterproof sealing desired. 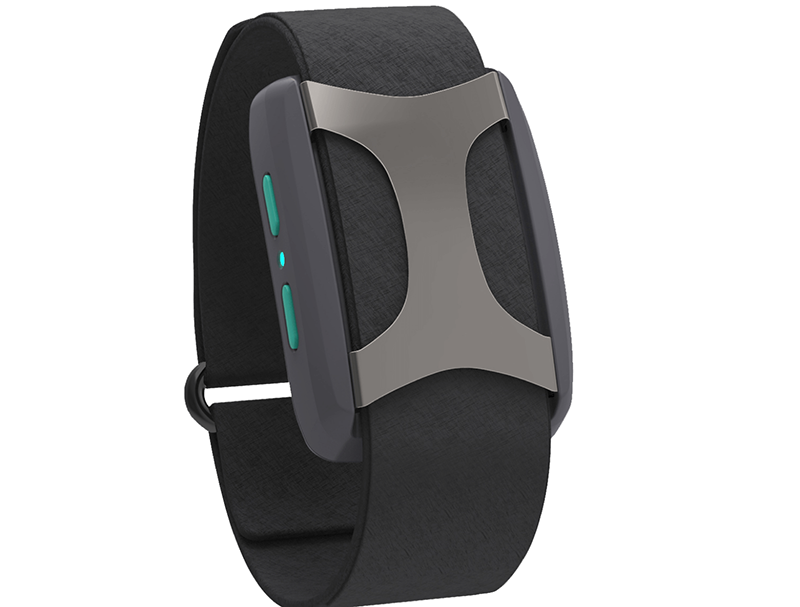 For the detachable band, Bally ended up using a soft neoprene, with polyester overlays, with an easy-to-open Velcro closure at the end. The extra length of the band tucks snugly under the aluminum clip, which allows it to be let out for use on larger ankle, for example. The clip is currently available in two finishes, and will be customizable for future users.

The device features two on-board buttons and a tiny LED light on one side. The green buttons are also molded from polycarbonate with a silicone backing material for structural integrity.

Aby-Eva said they designed the device to be easy to adjust with a single hand. He noted that it also was a challenge to fit all the necessary components into the tiny form factor. "Greg had to do a lot of work to position the components, while maintaining Apollo's slim, sleek profile," noted Dino Mariano, Bally's design director. "It was a very small size, with small clearances," he said.

The PC body is molded as a clamshell that is then bonded together. It contains a tiny motor, which is activated to create the vibrations. Bally––which initially made 3D-printed and hand-made samples––says they ultimately decided to apply the motor to the housing with a very strong tape. The clamshell is not designed to be taken apart.

In a testimonial on Apollo's web page, Dr. Joseph C. Maroon, a neurosurgeon, author, and triathlon athlete, said, "The science behind the Apollo wearable is deeply connected to how the human body responds to touch. Apollo vibrations, felt through the wearable, can activate different areas of our nervous system."

Maroon, who is a professor and vice chairman of the Department of Neurological Surgery at the University of Pittsburgh Medical Center, adds, "Apollo's vibration programs can modulate the sympathetic nervous system, so we can stay more focused and function to prevent stress health-related problems. It can also modulate the parasympathetic nervous system to increase relaxation and improve sleep."

In another testimonial, Amy Edgar, a family nurse practitioner and founder of the Children's Integrated Center for Success, states: "Since we started introducing the Apollo wearable to children during therapy sessions, we have seen a significant impact on children's behavior. Children using the Apollo in the therapeutic setting report feeling 'calm'," she says.

The company is offering the Apollo at a retail price of $349.99, Rabin said. For more details, go to: https://shop.apolloneuro.com .