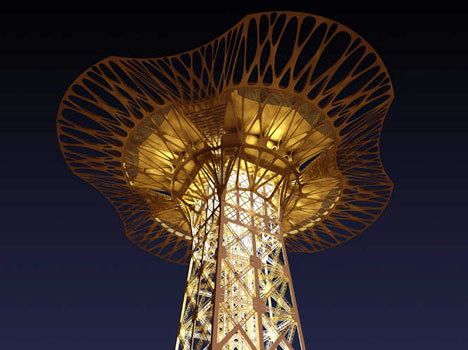 Paris-based Architects Serero have won an open competition to redesign any of the Eiffel Tower's public reception and access areas. Serero's proposal is a temporary addition to celebrate the Eiffel Towers 120th Anniversary by extending the top floor without any modification to the existing structure. It will expand the usable floor area from 280m2 to 580m2.

The Eiffel tower in Paris suffers from its success. Since its creation the amount of visitors coming to reach its top has increased to reach its limit capacity. 6.5 millions People wait between 35 minutes to 1H10 to reach the elevators. The floor area of each level decreases with the height because of the tower geometry resulting in very long waiting lines and crowd management problems.

Designed by Gustave Eiffel, the Eiffel Tower was built for the 1889 Expo in Paris. 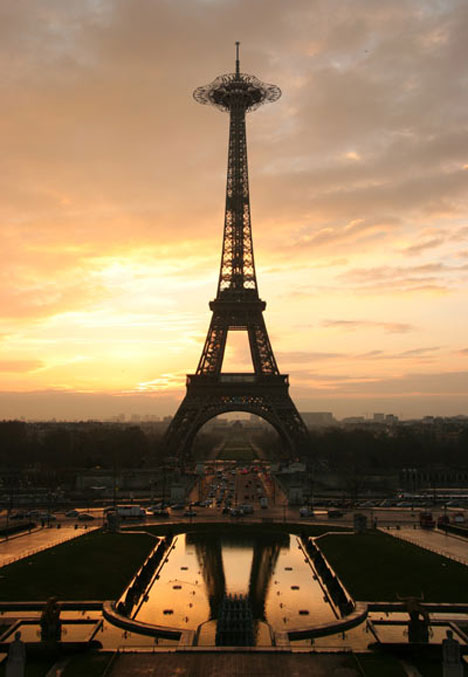 The structure The project will extend the top floor plate of the tower by grafting a high performance carbon Kevlar structure on it. The structure will be temporarily bolted to the slab without requiring any modification of the existing structure. It will expand the usable floor area from 280 m2 to 580m2. The extension is composed of 2 slabs connected to the third floor deck as well as the upper level used as an apartment of Mister Eiffel (a space provided for temporary resting of Gustave Eiffel). 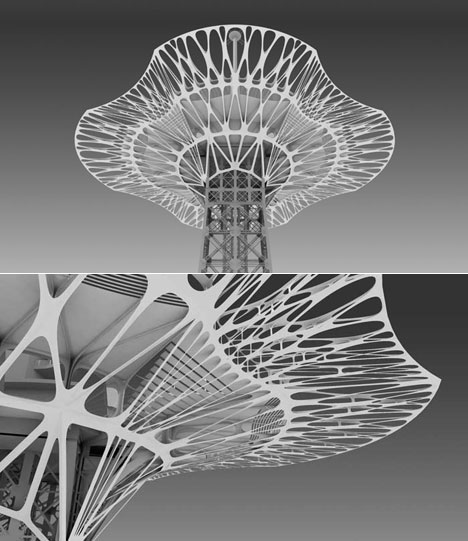 Generative Design The design is based on a generative script, creating branches out of the primary structure of the tower. Inspired by the structural concept of Eiffel of three-dimensional cross bracing beams, the script unfolds along curved lines the "DNA" of the tower. The script used the existing structure at the top of the tower ( a 10 by 10 meters cube) to generate 3 structural weaves, which are interconnected. These layers are combined to create a woven complex, which is based on the redundancy and the non-repetition of patterns to increase its structural performance. In opposition with modern engineering (based on the concept of repetition and optimization), the project for the Eiffel tower extension is based on an alternative model of high performance.