Ghesio, in the Italian countryside, is spectacularly beautiful

We've all seen our share of home renovations on TV, but you've never seen anything like this. In the Italian countryside lay a ruined, ancient village known as Ghesio, first settled in Roman times and built up in the medieval era. Abandoned sometime in the 19th century, nature reclaimed it. In recent years, a fellow named Maurizio Cesprini and his partner Paola Gardin, an architect, decided to take it back and live there. 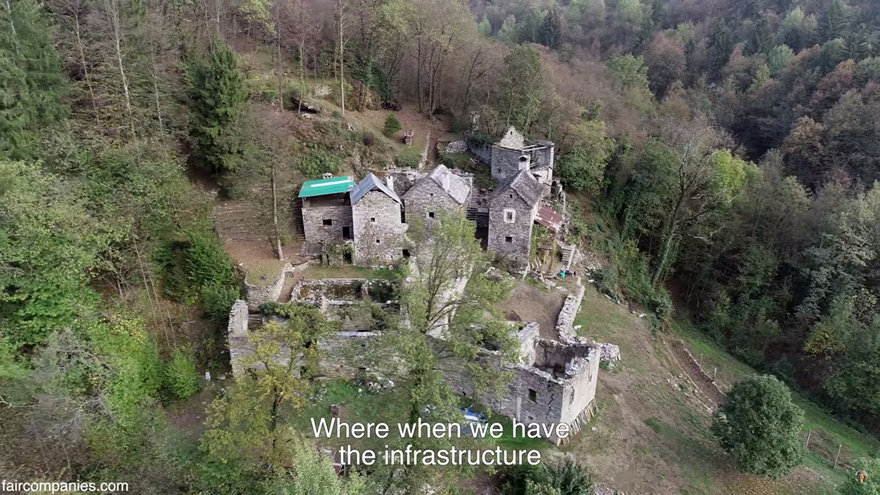 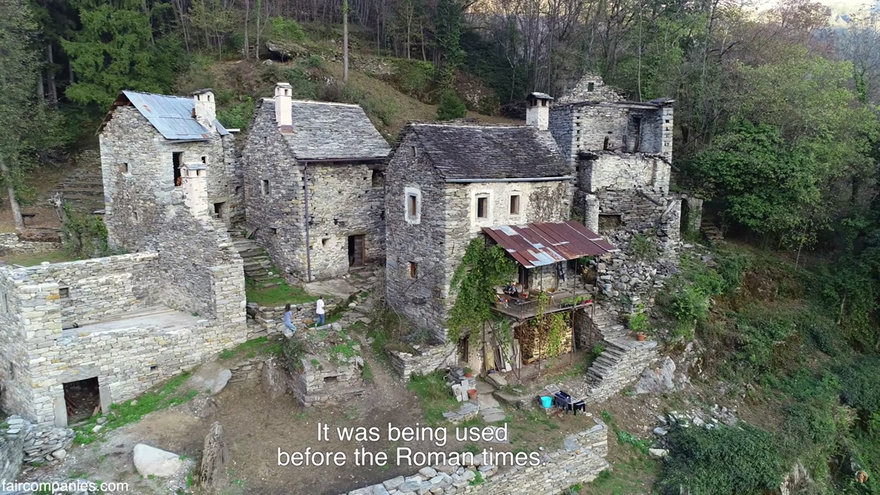 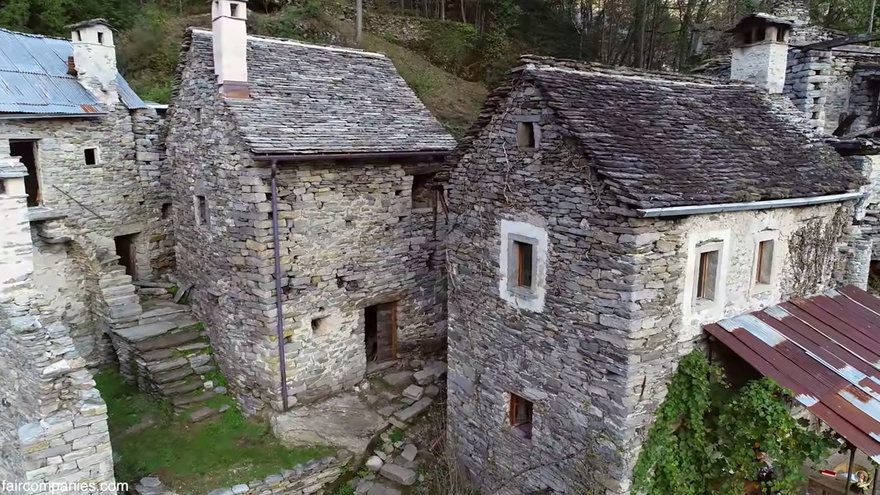 Kirsten Dirksen of Fair Companies captured some incredible footage of the place. She's also captured Cesprini and Gardin's story of how they renovated it, and hope to encourage other families (the duo have an infant son) to join them; there are a few other structures on the site that are uninhabited and could use a tenant willing to put in some elbow grease. 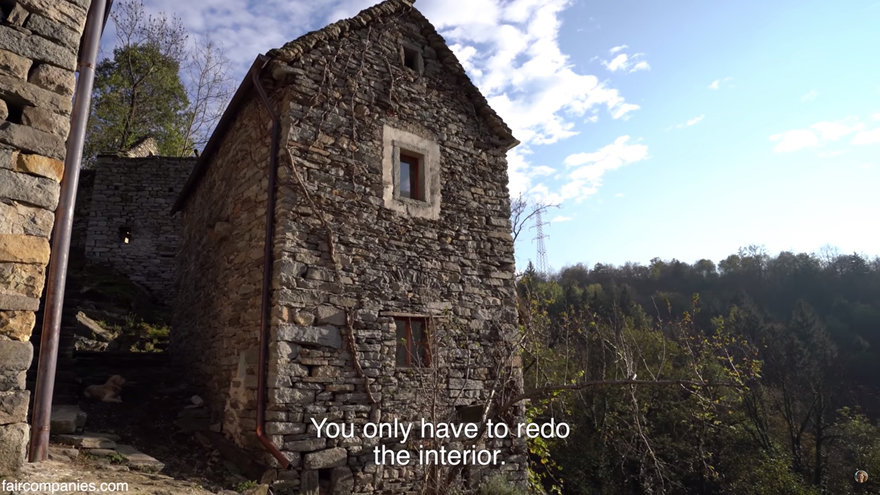 To make the space livable, the couple's first task was to repair the roof of the building they moved into. 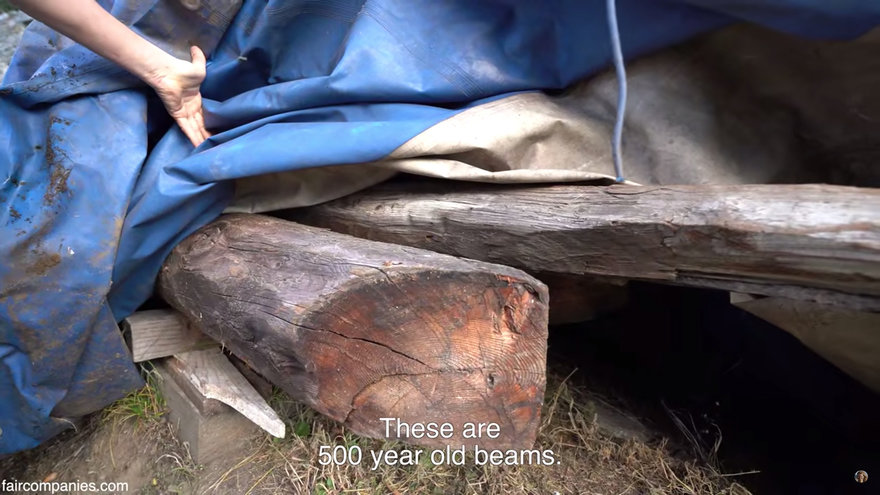 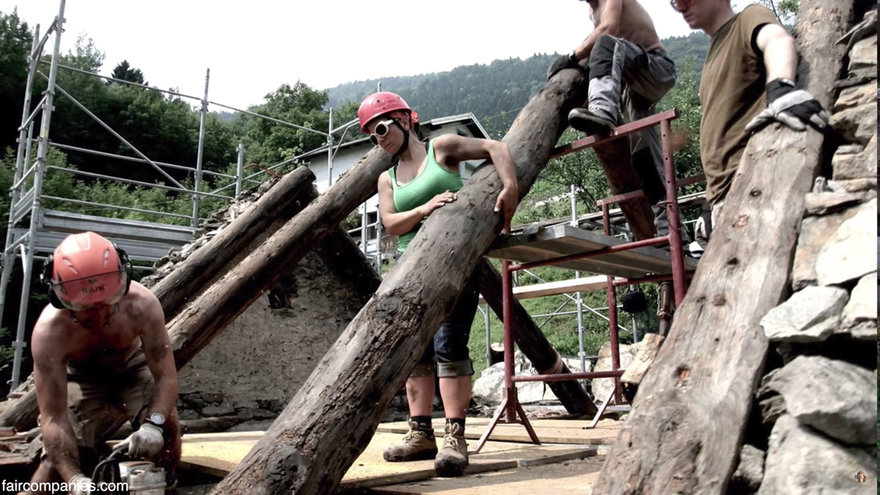 Incredibly, they remade the roof in the original way--using stone. The roof had collapsed over the centuries, but because stone doesn't rot, it was still lying around on-site, which helped matters tremendously. 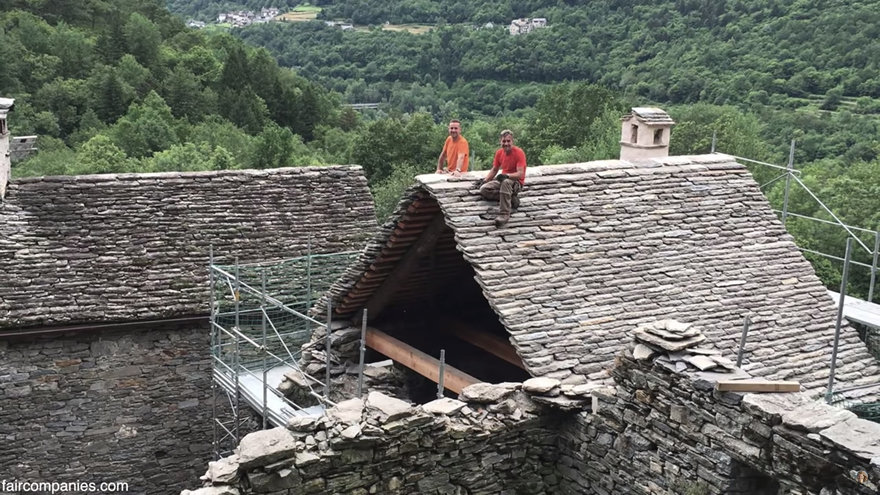 They laid in water and electrical by tying in to a nearby village, and made the interior space livable by plastering the stone walls. Here, students from a local polytechnic are conducting tests to verify the soundness of the two types of materials used to fill the stone gaps. 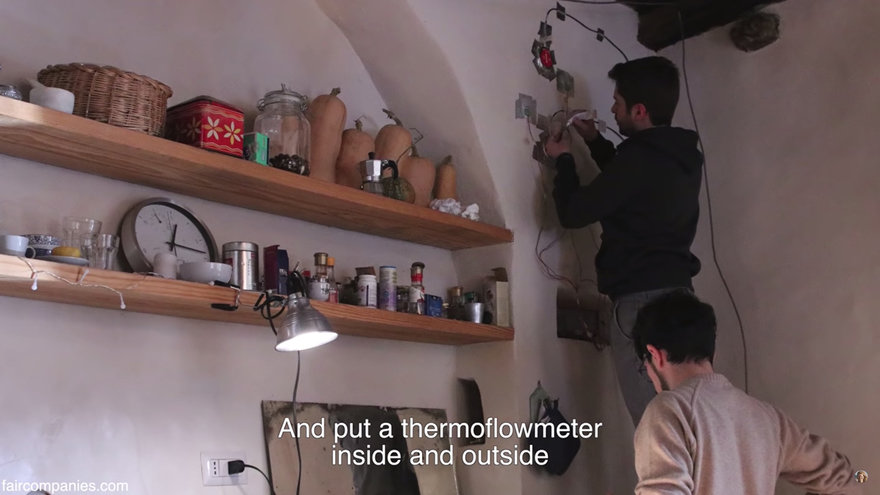 To restore the many arches on the property... 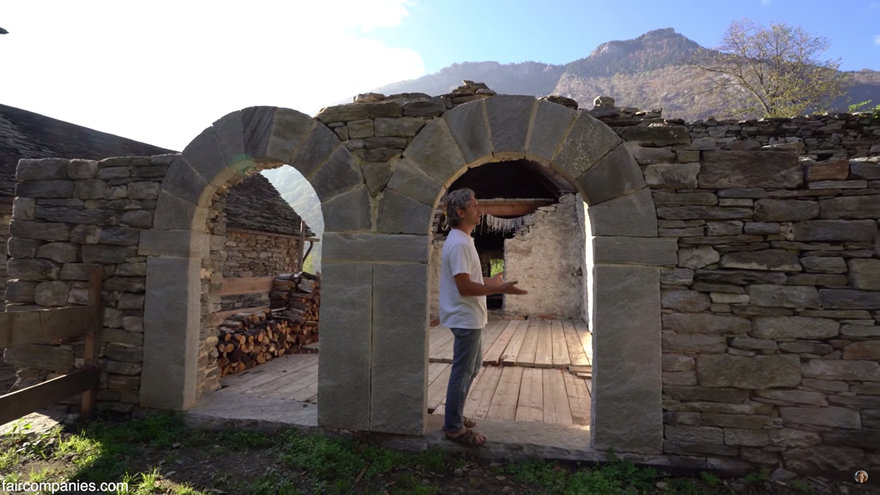 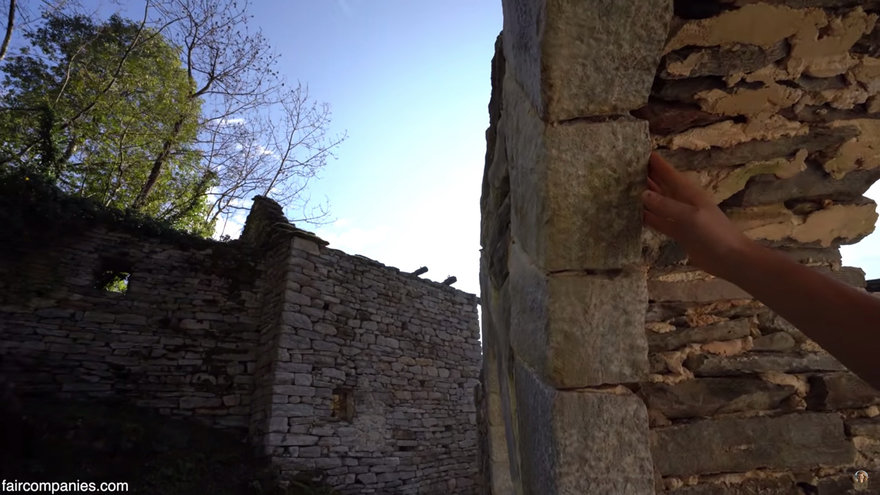 ...the couple had to learn to build the wooden arches that temporarily take the weight before the keystone is laid in place. Help came from restoration-minded students around the world. 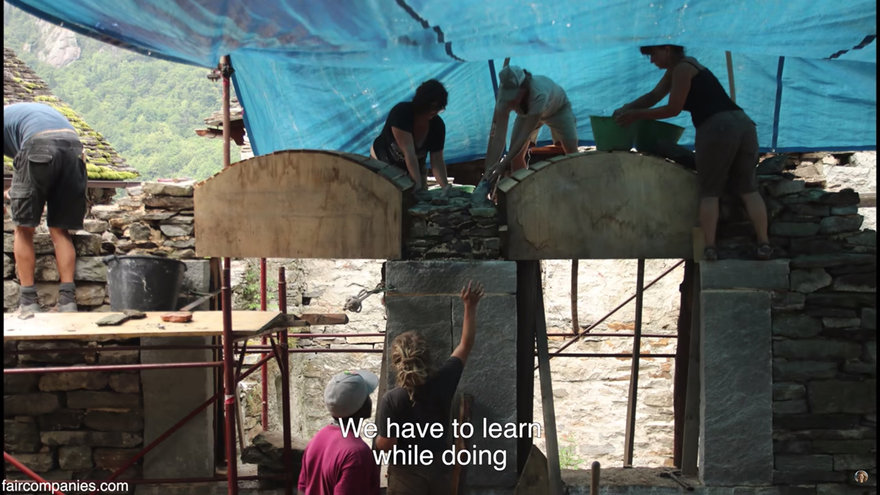 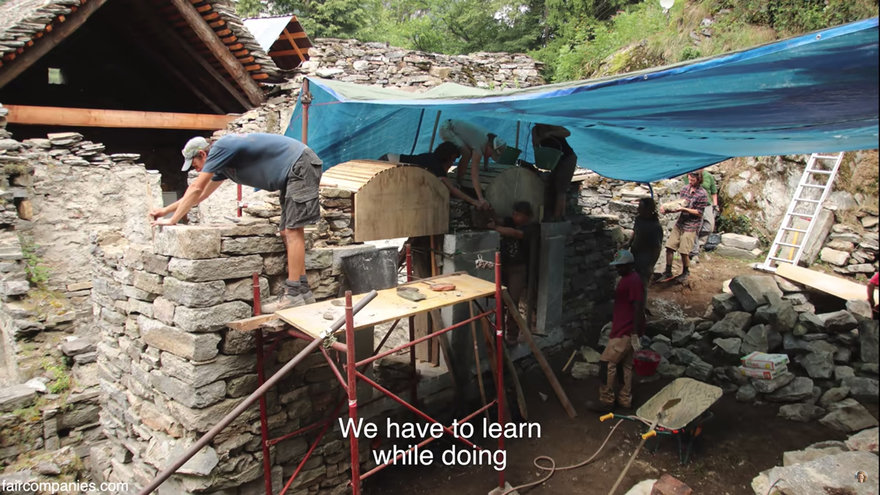 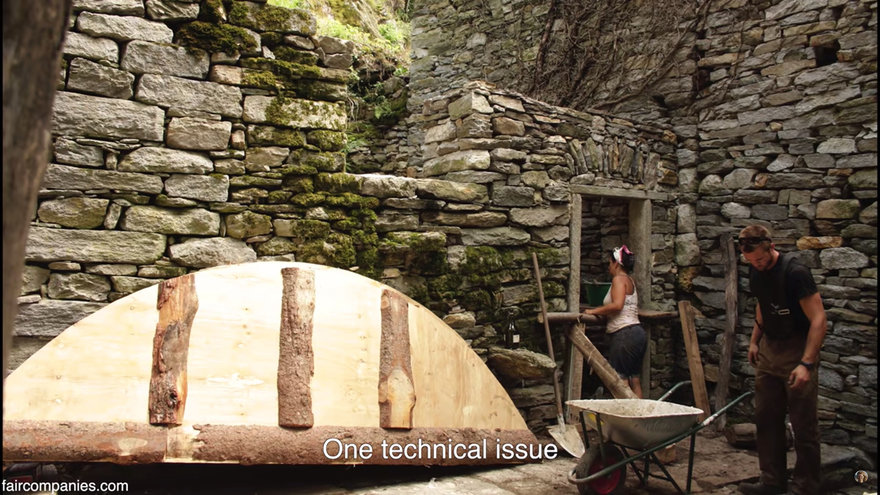 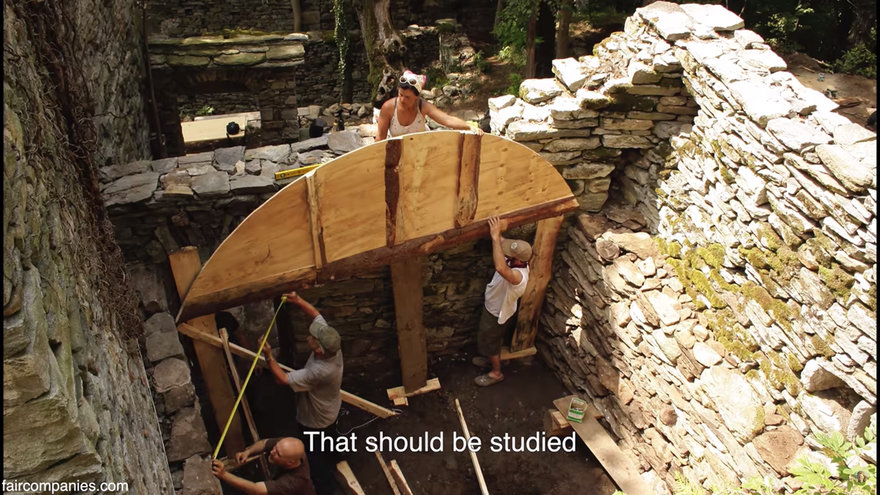 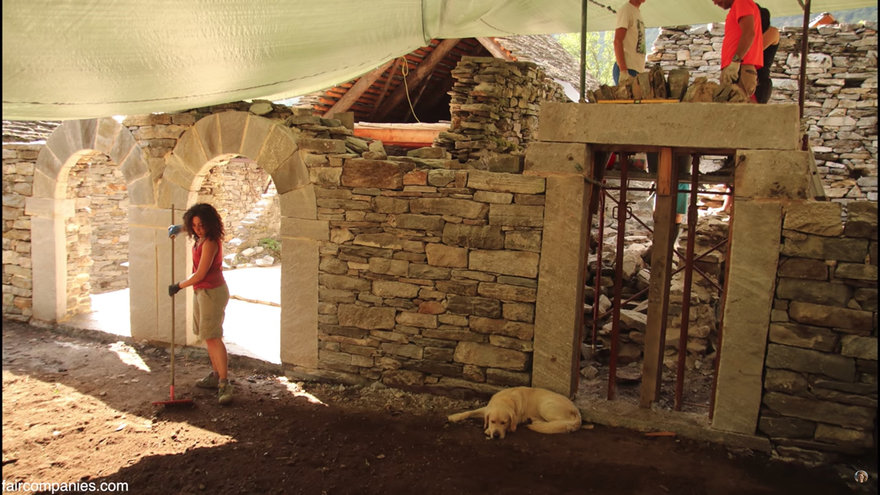 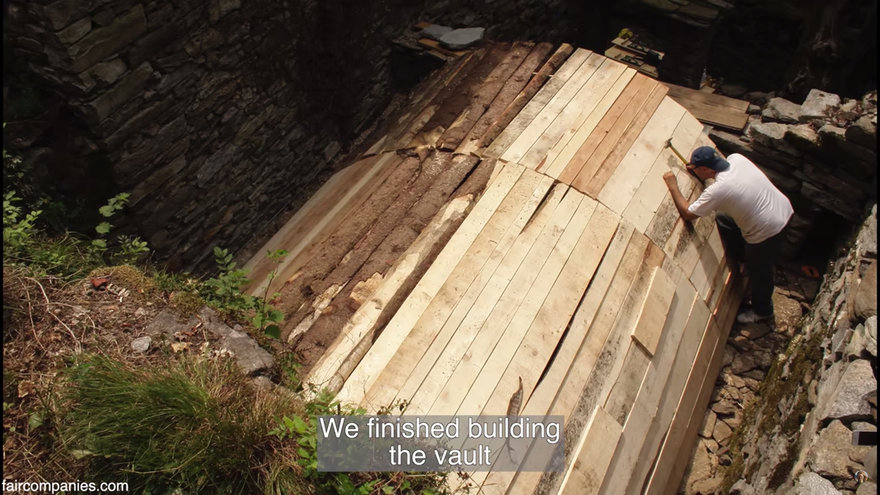 In this structure below, Cesprini shows you the massive stone oven they restored, explaining that in medieval times, this would have been a communal oven that the commoners would share (rich people had their own in-house kitchens). 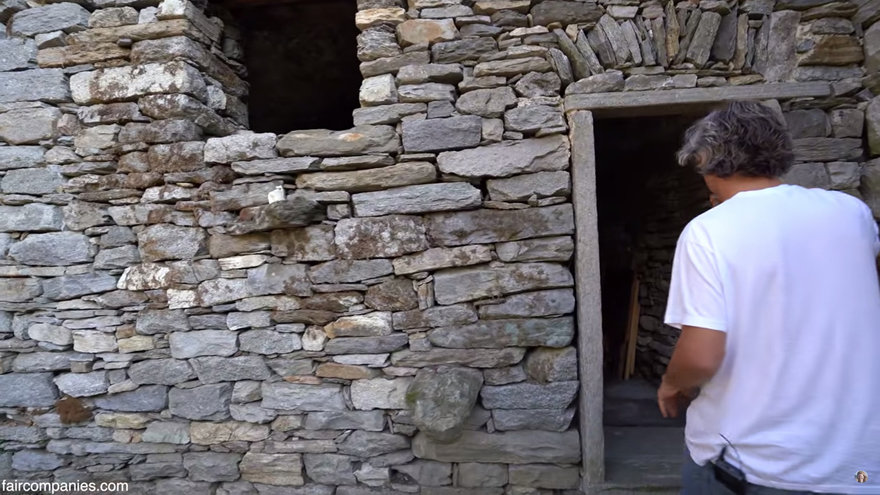 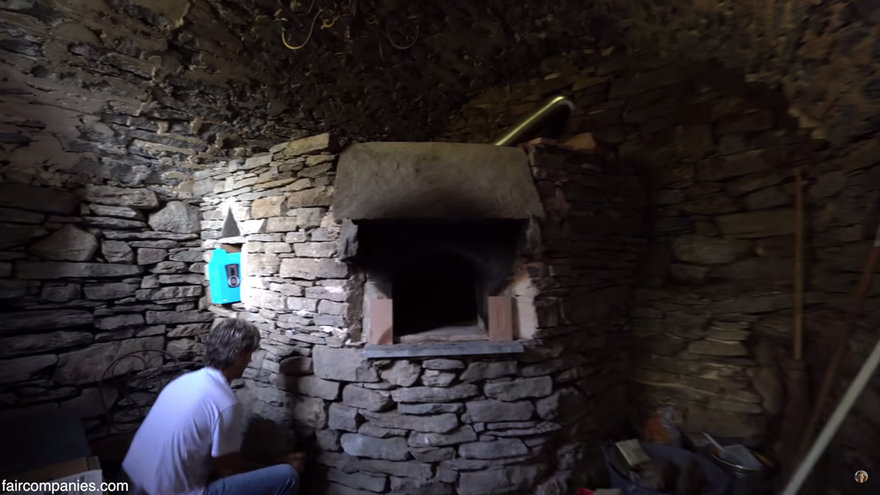 The students eat communally, but in a more modern kitchen. 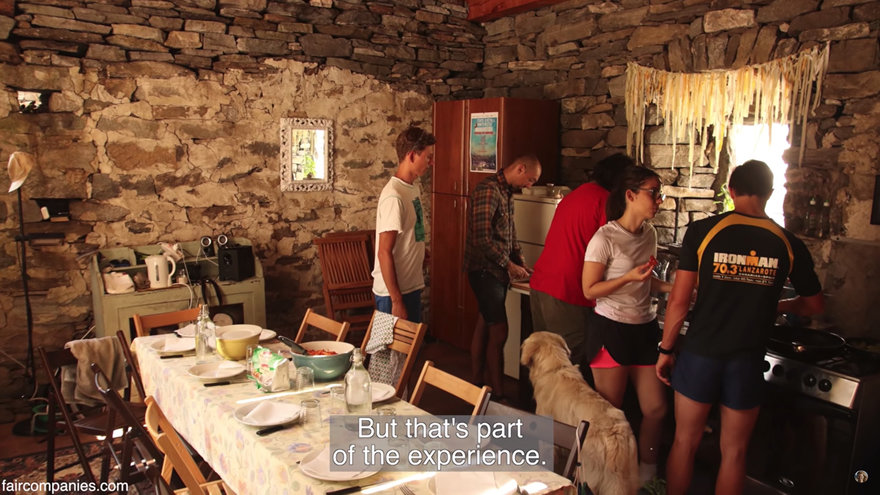 They even restored an amphitheater, where they hold concerts. 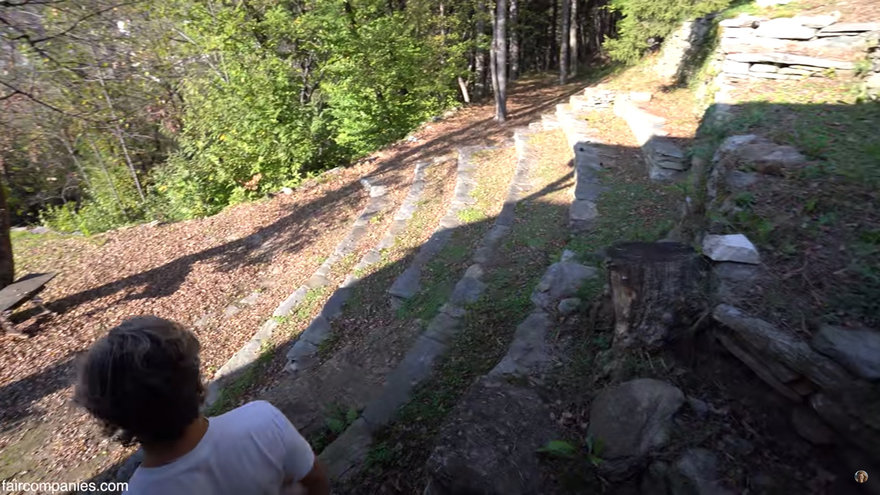 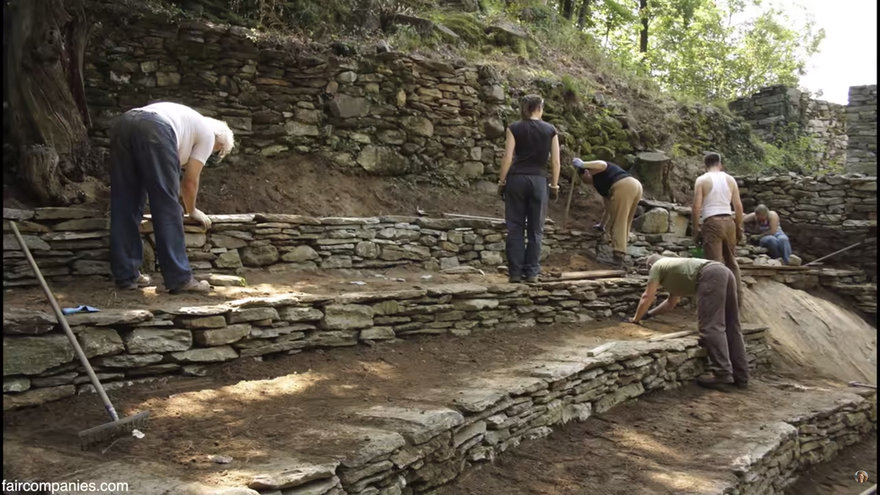 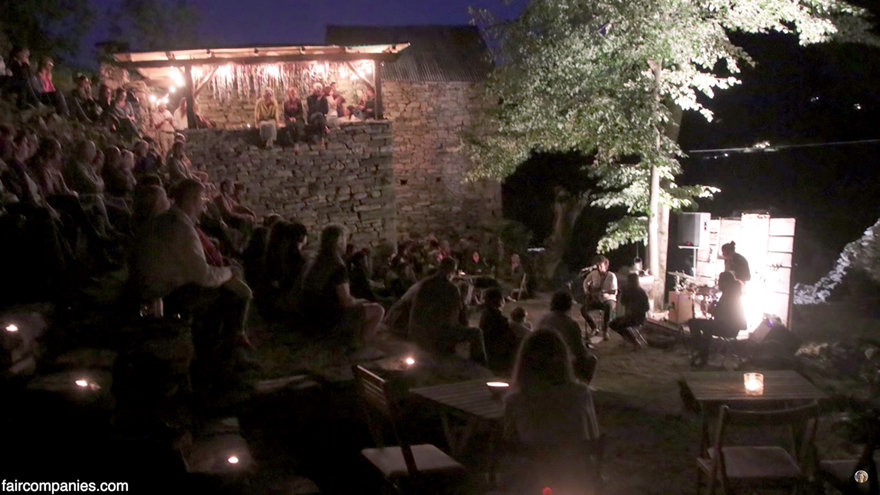 The amazing thing is the relatively low cost, if high man-hours, of restoring their slice of Ghesio. Cesprini and Gardin spent 25,000 euros and an estimated 1,000 hours to get it livable. 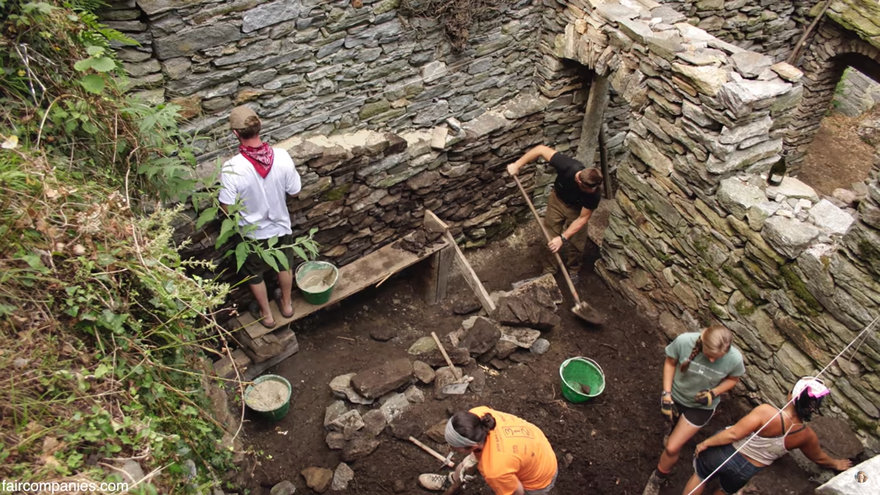 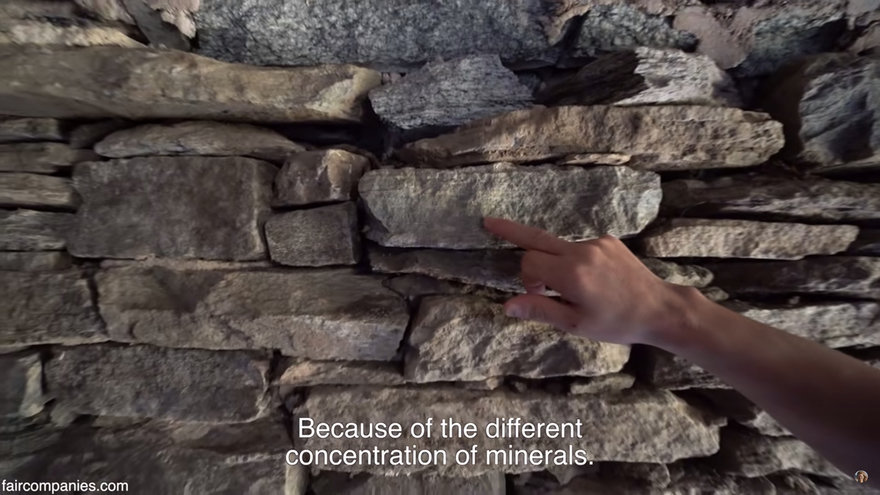 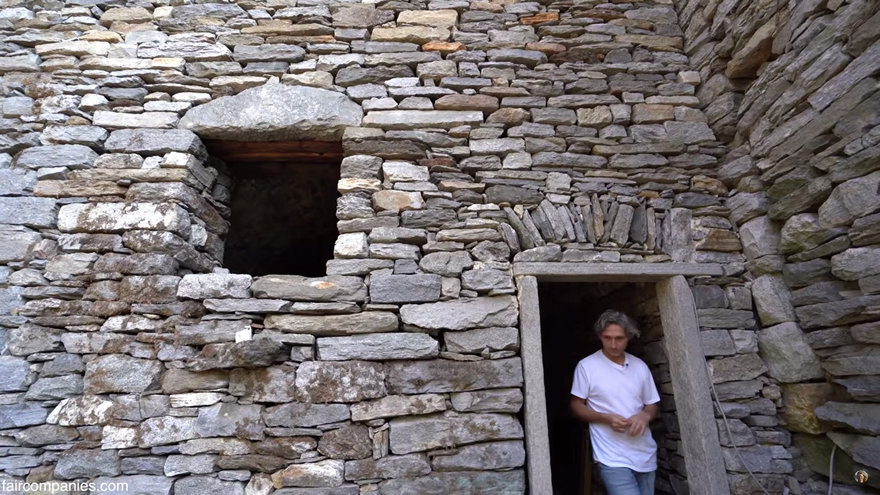 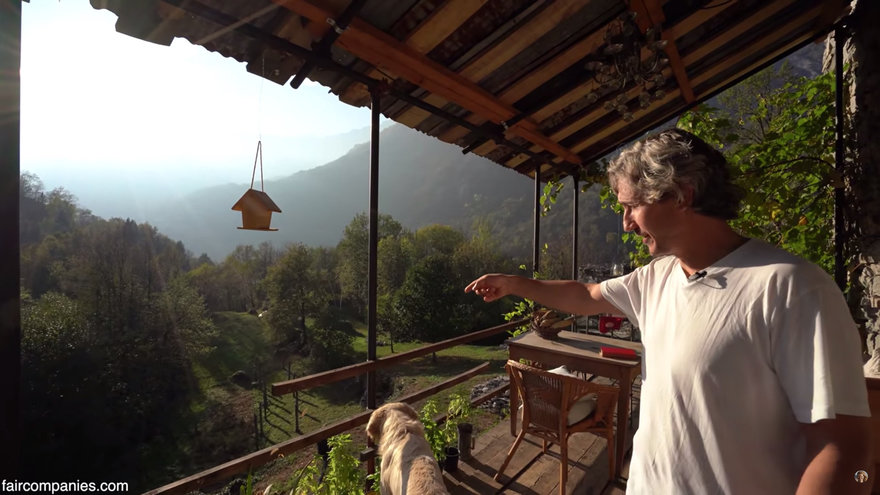 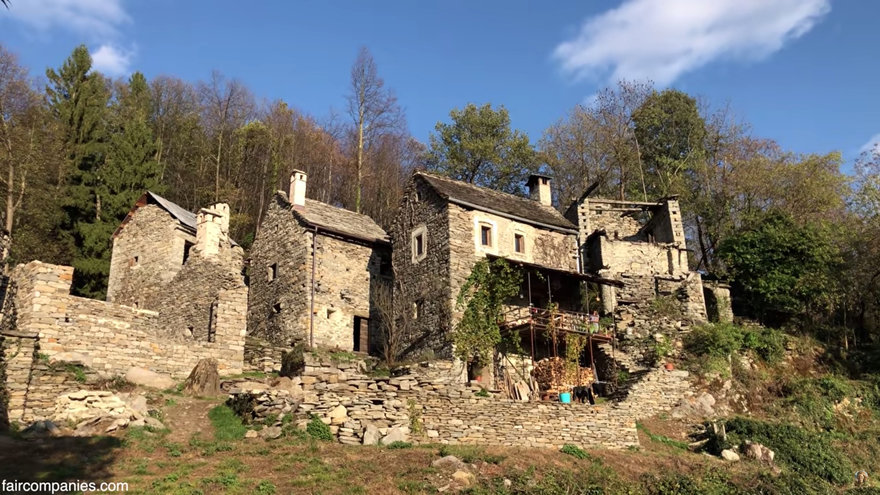 I hope the screenshots have enticed you to watch the whole video, below. At 30 minutes it's a bit long to sneak in at work, but if you save it and watch it later, you won't be sorry. You'll also get to see what the duo have done with the interior, which is low-tech, tasteful and impressive: