With so much news out there these days, I think a lot of people just scan headlines, skip reading the actual articles, and consider themselves informed. That's dangerous. Consider these headlines from yesterday, starting with the New York Times:

Dezeen's headline on the topic states:

The "Making Federal Buildings Beautiful Again" is a draft of an Executive Order that would give the White House final say over the designs of Federal buildings. You could be misled by the headlines above into thinking that the President (who is famously known for having somewhat gaudy taste) wants to get involved with design decisions and apply his MAGA philosophy to them. But after digging into the subject, I've found no evidence that that is what is going on, nor confirmation of who exactly wrote the draft. What I have found is that the story is not as clean-cut as the headlines make it seem.

I'll explain what I think is going on, by starting with…Swedish supergroup ABBA.

A much-circulated (and possibly apocryphal) anecdote is that ABBA member Benny Anderssen was asked, presumably for the thousandth time, when there would be an ABBA reunion.

"No one really wants an ABBA reunion," Anderssen reportedly said. "What people want is to be sixteen again."

I believe that the appeal of Trump's MAGA philosophy to his base comes from the same instinct that seeks ABBA reunions. In today's complicated times, lots of folks wish to magically rewind the clock and return to a more simple era. They feel that in that era, things were better for them and their people.

This instinct exists in the design world, too. Some people absolutely hate modern design, or modern architecture, and they want to rewind to the time of their childhood, when it wasn't so prominent. And one of those people, Justin Shubow, is now in a position to do something about it.

Shubow is the president of the National Civic Art Society. That's a D.C.-based nonprofit--not a governmental organization--that advises civic leaders on matters of public art and architecture. And they do this "by advancing the classical tradition in architecture, urbanism, and their allied arts."

The NCAS really doesn't like modern stuff. As they write:

"We believe that contemporary architecture is by and large a failure. The public finds it ugly, strange, and off-putting. It has created a built environment that is degraded and dehumanizing.

"The reason for this failure is the ideology of architectural Modernism, which came to dominance after the Second World War. The National Civic Art Society endeavors to help architecture return to its pre-Modernist roots, particularly the forms, principles, and standards of the unparalleled classical tradition, and the humanistic architectural idioms that are derived from it."

In addition, Shubow himself has issued public testimony decrying certain modern architecture programs designed for both the public and individuals. For the former, Shubow was a vocal critic of Frank Gehry's proposed Eisenhower Memorial. For the latter, remember when Brad Pitt turned amateur architect/designer and founded the "Make it Right" charity in 2007, to build modernist houses for New Orleans residents displaced by Hurricane Katrina? In a 2015 article in Forbes titled "Architecture Continues to Implode," Shubow wrote:

[The "Make it Right" program] invited firms, most of them avant-garde, to design housing for poor New Orleanians whose homes were destroyed by Hurricane Katrina. The architecture world was exhilarated: The initiative was to be a showcase for how the best contemporary design could improve lives.

The predictable result was weird, sometimes discomforting houses of non-native motley futuristic design that have virtually no relation to each other or the beloved historic architecture of the city. 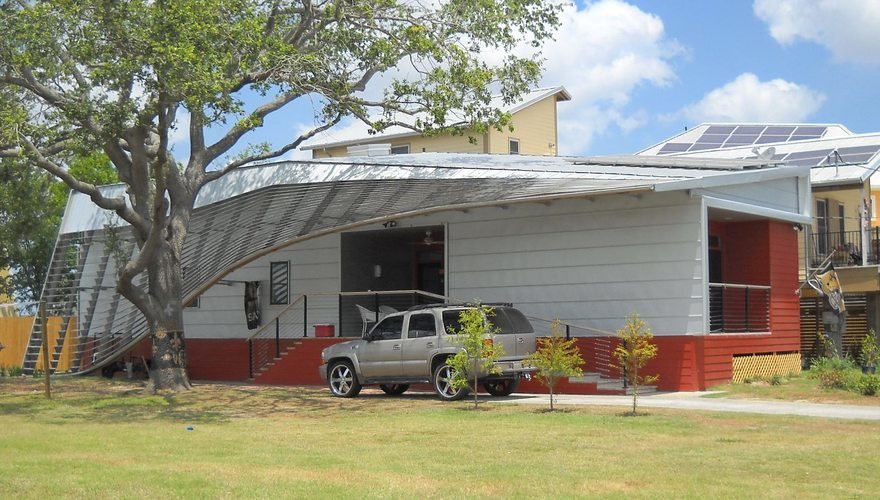 A story in The New Republic called the 90-some houses a waste of money and a distracting sideshow: The homes were expensive to build ($400,000 on average) and the high-tech fabrication has made them expensive to fix; mold has grown on the untested experimental materials, and the eco-wood decks and stairs are already rotting. The neighborhoods are wastelands—failures of urban planning that isolate residents from social networks and public services.

Now that you understand Shubow's beef, let's look at his juice.

The nonprofit National Civic Art Society that Shubow heads up doesn't actually have any juice. The U.S. Commission of Fine Arts, however, does. And in 2018, Shubow was Trump's first appointment to the CFA's seven-member council. (Council members serve four-year terms and are appointed by the President, no Senate approval required.)

The reason the CFA holds some actual sway is that they're an official agency of the federal government. They have review authority "on matters of design and aesthetics" including "designs proposed for memorials, coins, medals, and new or renovated government buildings, as well as privately owned properties in certain areas of Washington [D.C.]."

If you look at the headlines regarding "Making Federal Buildings Beautiful Again," which seem to have been generated in a game of "Operator," they'd have you believe the President himself drafted the order. But there's no evidence that he has, and the White House is unsurprisingly remaining mum.

The Times, however, states that the draft order was "spearheaded by the National Civic Art Society"--Shubow's org. The Times also corresponded with NCAS Chairman* Marion Smith, who defended the order, writing:

"For too long architectural elites and bureaucrats have derided the idea of beauty, blatantly ignored public opinions on style, and have quietly spent taxpayer money constructing ugly, expensive, and inefficient buildings.

"This executive order gives voice to the 99 percent — the ordinary American people who do not like what our government has been building."

*(Note that Marion Smith is a male, hence I used the term "Chairman.")

Additionally, two months ago Trump appointed two other members to the CFA: Architect James McCrery--a founding member of the NCAS--and architect Duncan Stroik. Both McCrery and Stroik are champions of classicism.

So if I had to guess, I'd say that Shubow, McCrery and Stroik have used their leverage in the CFA to advance the pro-classical, anti-modernist mission of the NCAS to get the draft into White House circulation.

It may not matter to you how the draft came into existence, but it does to us. We are just as interested in how things happen as we are in what the results might be.

The current design community is in agony, and I can sympathize with them in that I don't share President Trump's sense of aesthetics, and am not crazy about giving him design approval. I am, however, disdainful of some of the modernist architecture choices made for government buildings in the past couple of decades. I'll get into that in another entry.

Following news of the draft (which all started when Architectural Record "obtained what appears to be a preliminary draft of the order," the only publication to do so), the American Institute of Architects released a statement:

"The AIA strongly opposes uniform style mandates for federal architecture. Architecture should be designed for the specific communities that it serves, reflecting our rich nation's diverse places, thought, culture and climates. Architects are committed to honoring our past as well as reflecting our future progress, protecting the freedom of thought and expression that are essential to democracy."

It's worth noting that both McCrery and Stroik themselves are AIA.