Eiffel Tower Extension is a hoax! 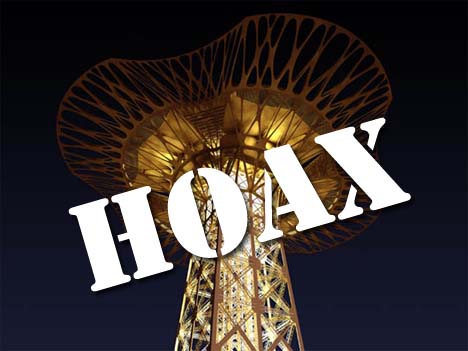 It seems April Fools day came early for the architecture world, the Eiffel Tower Extension proposed by the architect firm Serero is fake. Images spread quickly across the blogosphere and the story was eventually picked up by mainstream media including The New York Times, The Guardian and The Daily Telegraph. Mixed responses are being published from both the architects and the tower management company La Societe d'Exploitation de la Tour Eiffel (SETE), the most informative round up can be found at the Belfast Telegraph.

... a spokesman for David Serero architects, who declined to give his name, insisted that the company had been, "invited to enter a limited competition", and that, "we would not have drawn up such elaborate plans unless we thought that there was a genuine competition".

We're sorry we were tricked too, whatever the truth really is, you can't deny this was a great publicity stunt for all parties involved. And we still like the concept btw.

Eiffel Tower Extension is a hoax!