In a "Flying Wing" Airplane, Would Passengers Sit Facing Forwards, or at an Angle?

I was just thinking about those "flying wing" airplane concepts like this one, where the plane is shaped like a V because that apparently improves fuel economy, and wondering: If these things go mainstream, what are the interiors going to look like, in terms of seat orientation? 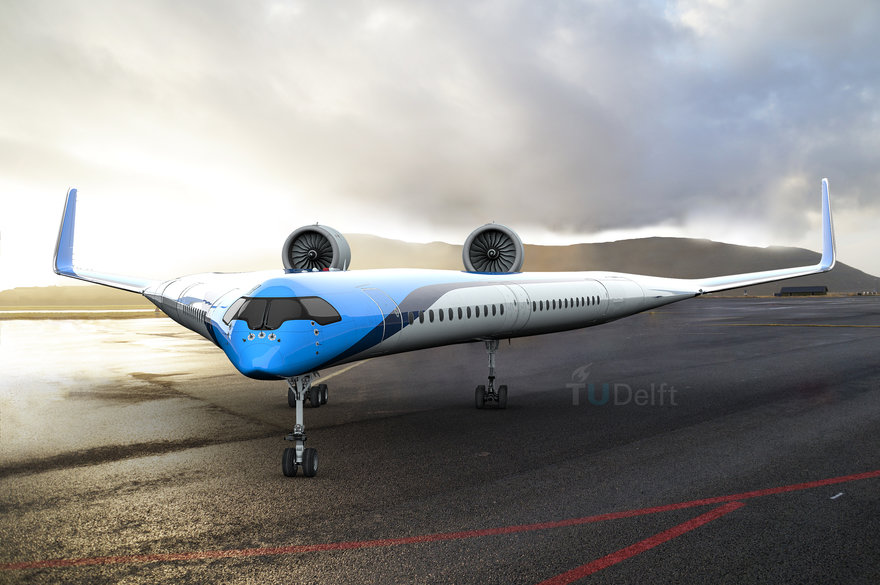 In subways, trains and buses you always sit facing forwards, backwards or sideways relative to the direction of travel; in civilian aircraft you always face forwards, as I imagine the thrust of takeoff is less pleasant in other orientations. 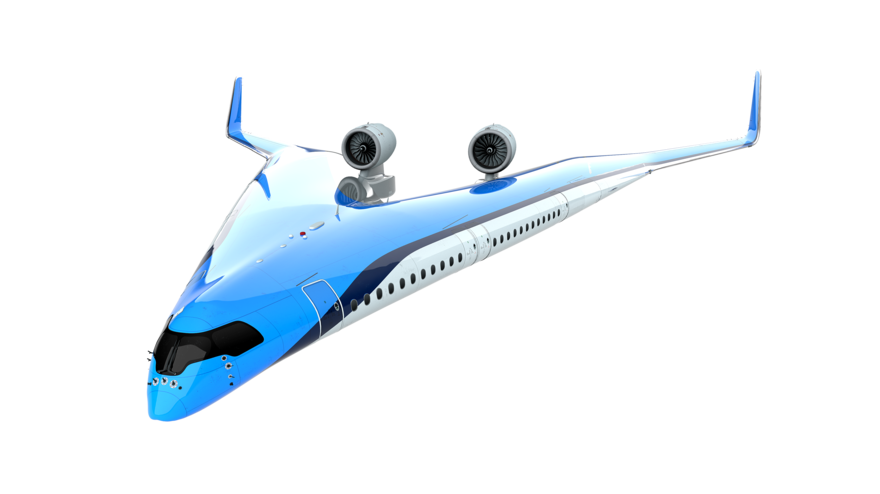 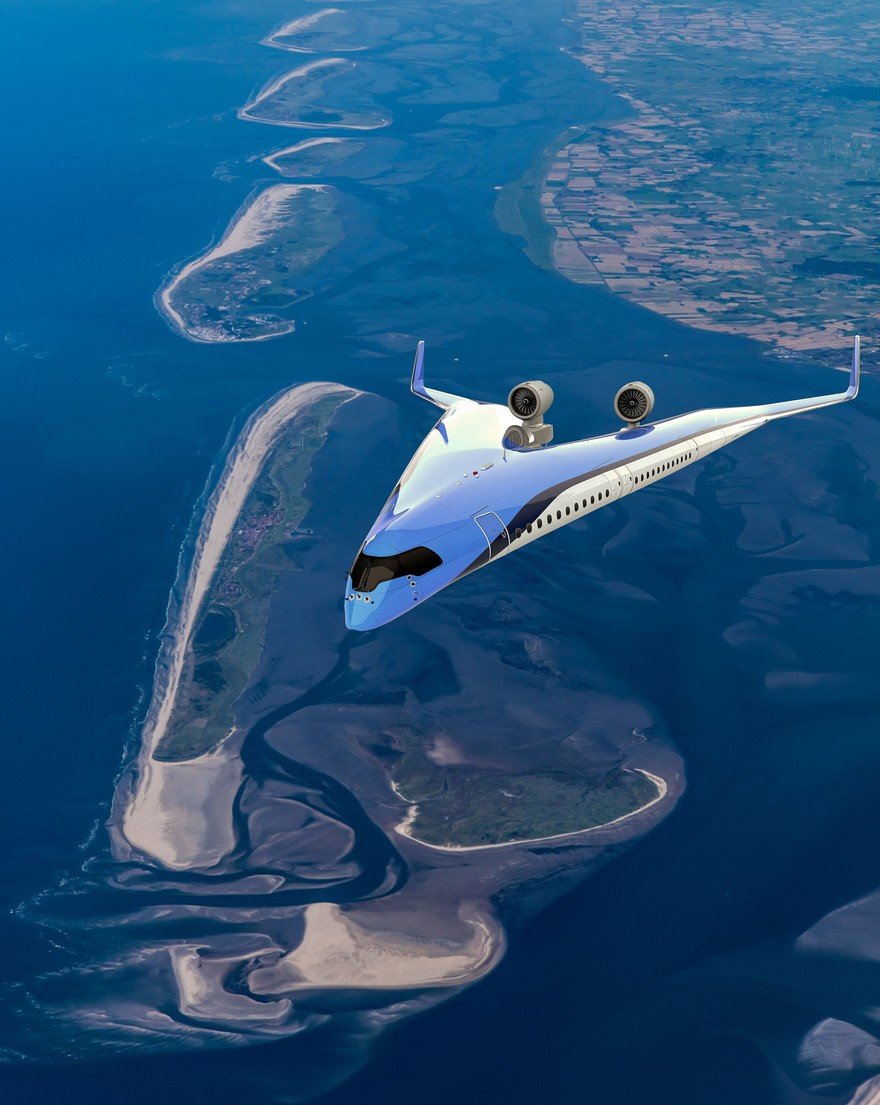 If we look at this KLM flying wing concept designed by TU Delft students, it appears the answer is…both: 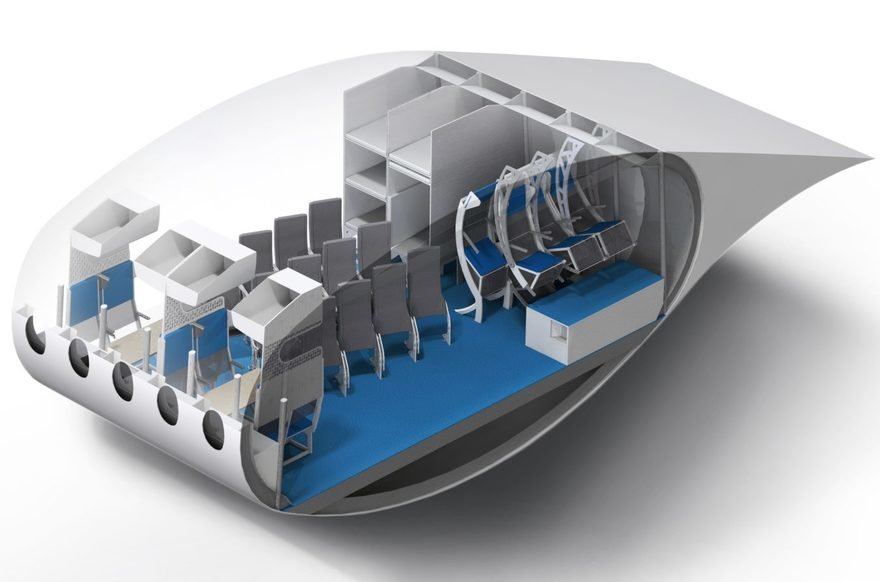 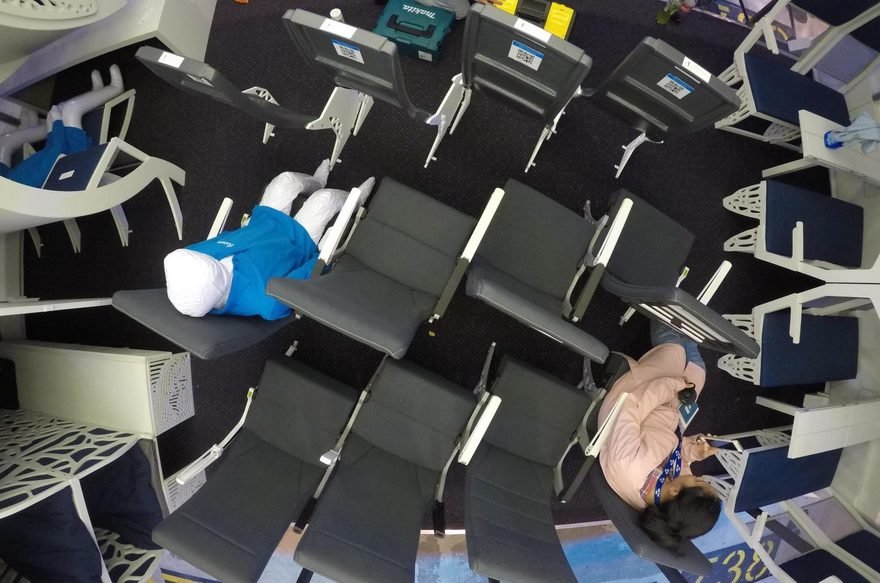 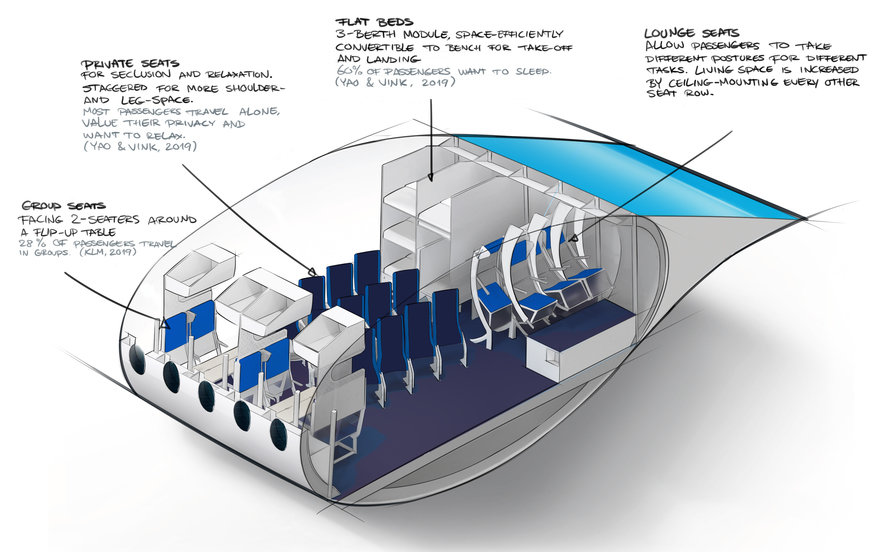 Here's how those four different sections break down: 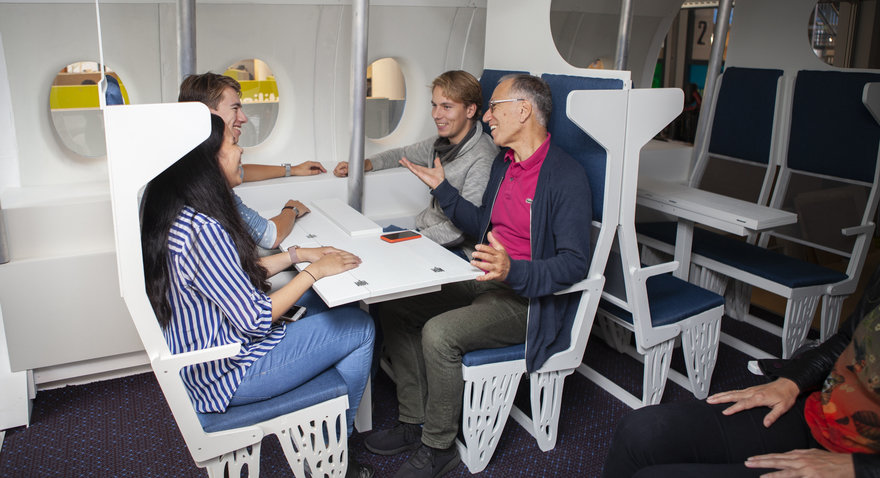 "Booths of two two-seaters facing each other with a table in the middle, so passengers travelling together can sit opposite of each other, have conversations, dine together with a view. Each passenger can also work on his/her own laptop."

As shown in the photo, I don't think there's enough space for passengers opposite each other to both use laptops, but the spaces do seem close enough to have a conversation amidst engine noise. This might be a nice option for families traveling together.

Alternatively, airlines could seat individuals of opposing political views together; lubricated by complimentary and unlimited alcoholic beverages, they could engage in a productive and spirited exchange of ideas. 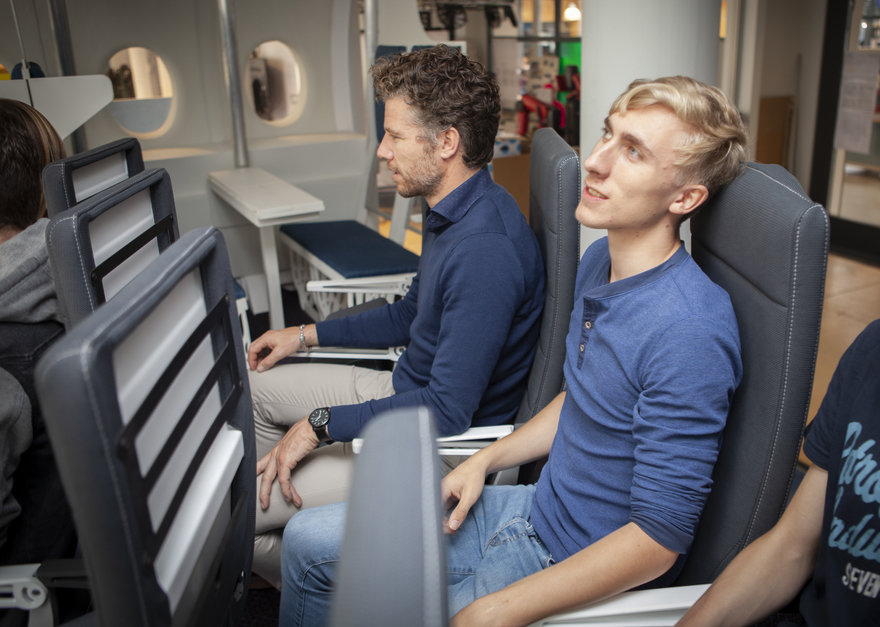 "Rows of staggered seats accommodate passengers travelling alone by increasing the living space, namely shoulder- and leg-space, and sense of seclusion. Due to the angle of the cabin to the direction of flight, a fundamental result of the unconventional v-shaped aircraft design, staggering is done by placing each individual seat in the direction of flight, while keeping seat rows perpendicular to the cabin."

Having been on enough flights where I'm the middle guy sandwiched between two defensive linemen, I like this idea of staggered seating and the shoulder room it affords. However, I'd be curious to see how they solve ingress/egress for the middle passenger here. 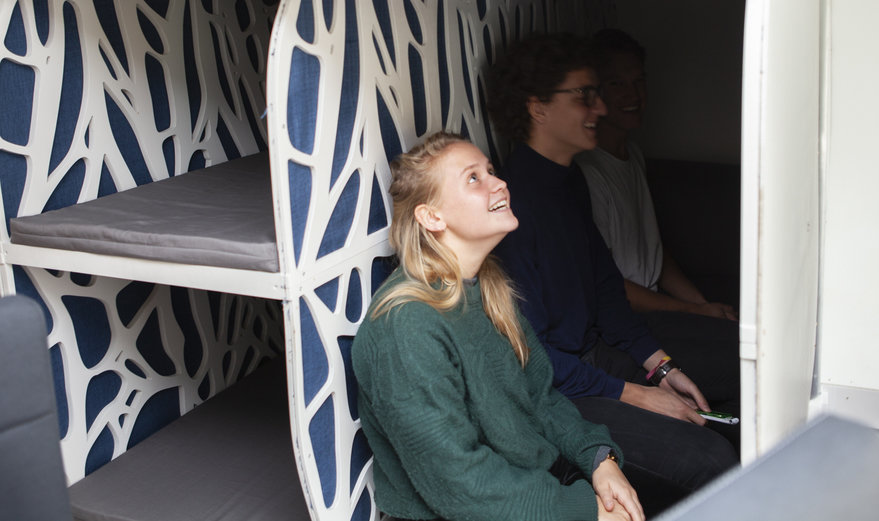 "Research also shows that 60% of passengers want to sleep on long-haul flights - however, they do not want to sleep all 12 flying hours. Flying-V's bed concept therefore consists of a three-berth module that can be converted into a three-seater bench for secure upright seating during take-off and landing. A patent is currently pending for this principle."

This is a nifty idea I'd certainly avail myself of on a long-haul flight. However, I suppose the viability of an onboard space like this would depend upon whether this is dedicated per-passenger or optional, as the former means you'd potentially have to coordinate with two strangers on when lights-out is. 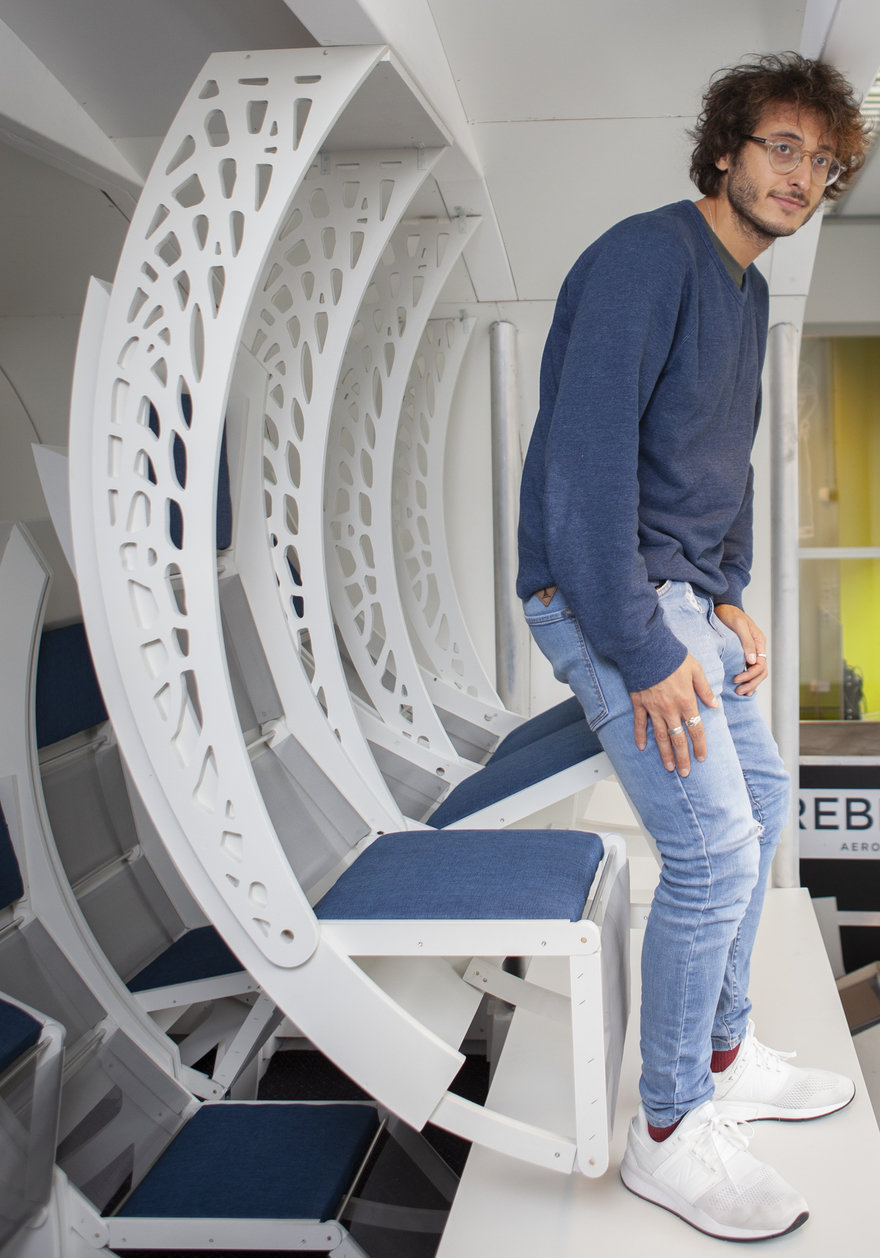 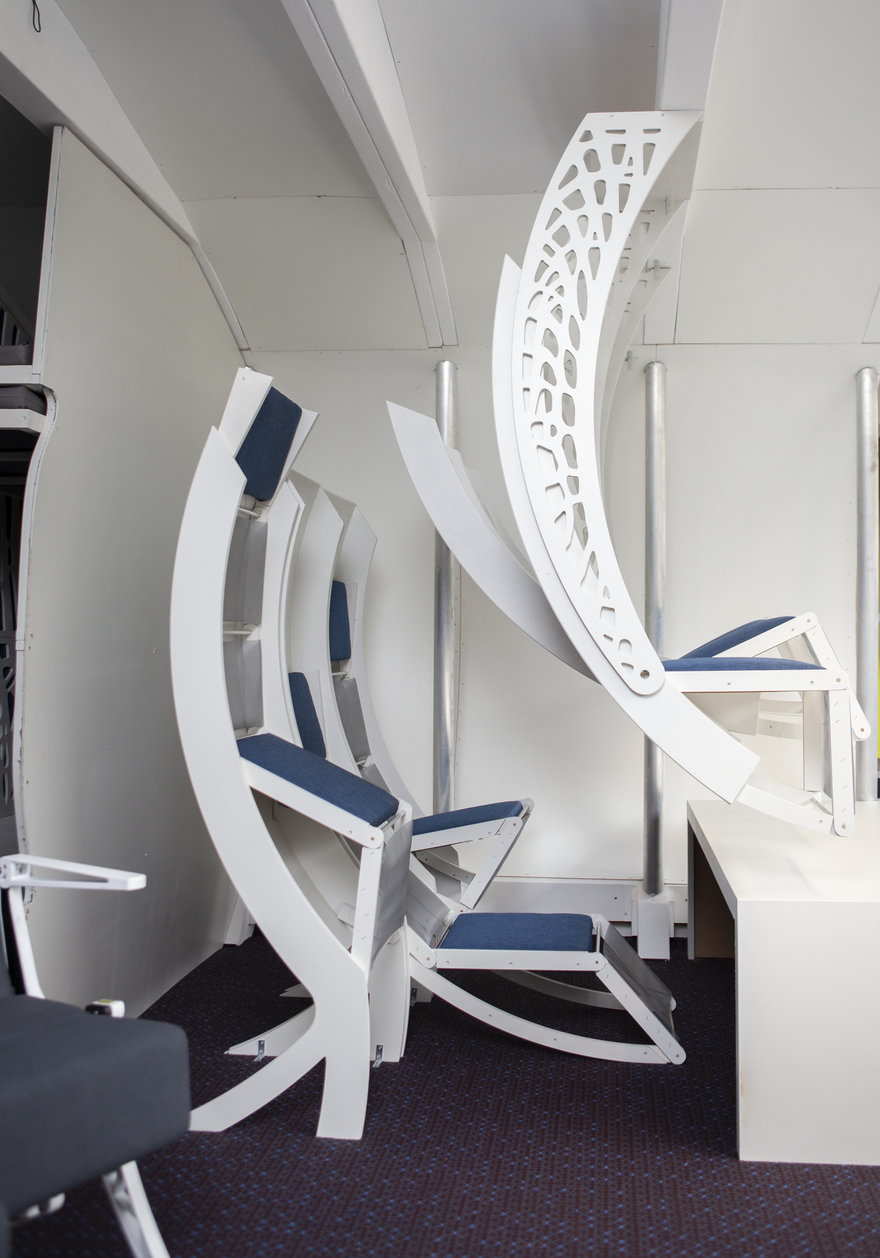 "In this lay-out, every other seat row is ceiling-mounted; this does not use up additional space. This type of seat allows passengers to take different postures within the same seat. People can sit upright, for example for using a laptop, or alternatively use the space of two seat pitches for lounging or reading."

This too appeals to me, the idea that you could try a variety of positions; However, it still doesn't solve the potential incompatibility of your desired position and that of the person in front of you.

If there's one thing I wish long-haul flights offered, it would simply be a place where you can stand without creeping people out or getting in others' way. I know I'm alone in this, but I'd rather break up a flight with long, 30-minute bouts of standing; because afterwards it makes sitting down a desirable relief, as opposed to feeling like you're confined to a chair for the duration.

Another question raised by looking at this concept is how boarding/deplaning would be handled. If airports did not have additional infrastructure, the process could be awkward: 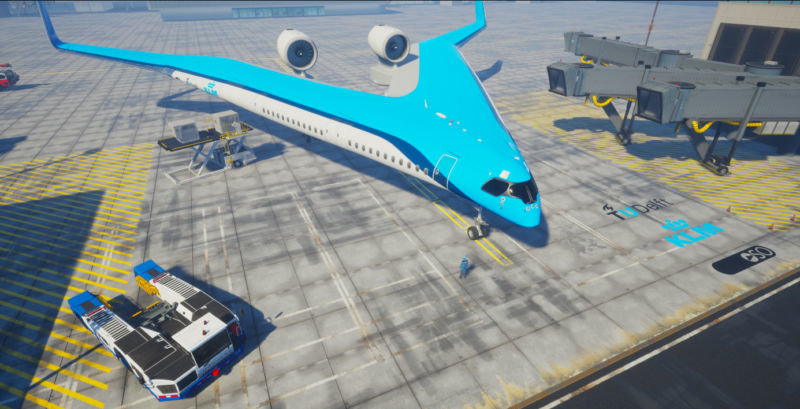 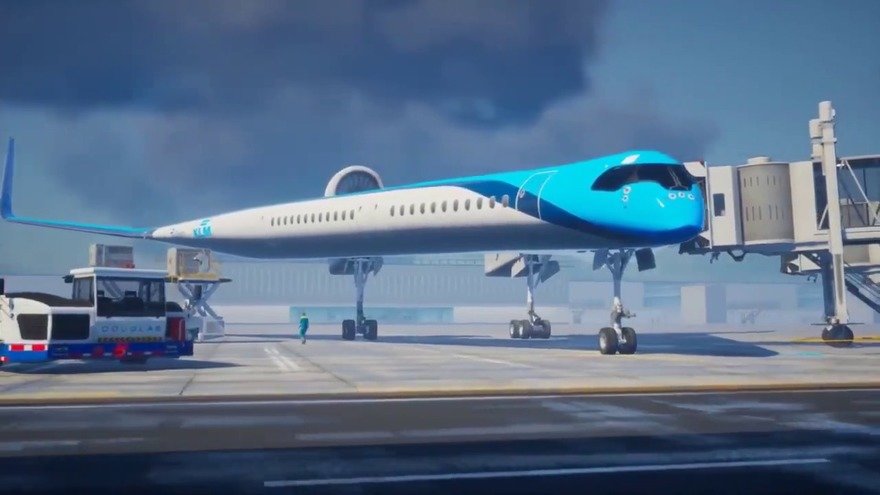 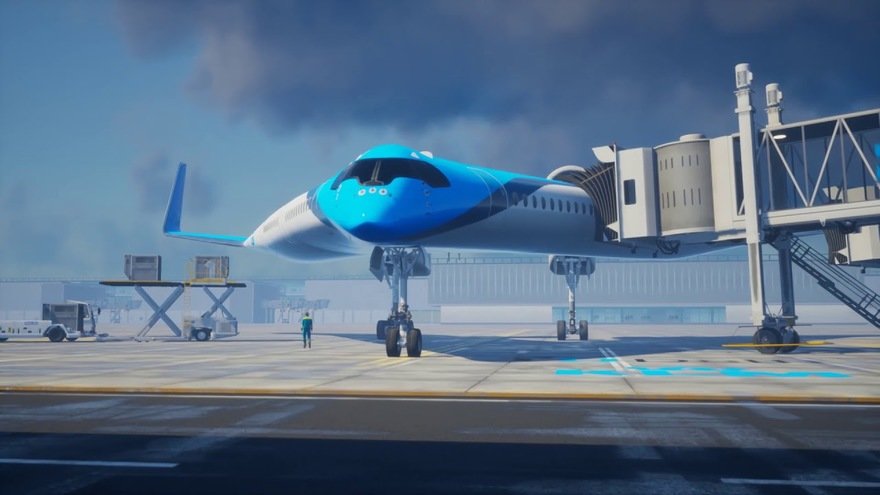 Looking at these photos, I'm thinking everyone in the aircraft's port side are Business Class, and they get to disembark through the jetway like civilized human beings. The rest of us in Coach are on the starboard side and descend to the tarmac via rope ladders.

Anyways this is, of course, just a concept, one that some 80 design students at Delft got to work on. In reality we're probably a long ways off from flying wing aircraft, with plenty of technical hurdles and passenger acceptance barriers to breach. As one example, Ars Technica points out:

"Take-off and landing create [a] problem for the Flying V. Most passenger planes take off and land at an angle of 2 to 3 degrees, and even the maximum angle of attack (for example) of a Boeing 747 is just 10 degrees….

"The Flying V will need to take off and land at a 20-degree angle, which will be a big adjustment for passengers and pilots."

That settles it for me; I'd rather sit facing true-forward, not aligned with the fuselage. Coming in at a 20-degree angle and seated diagonally sounds fairly terrifying.