New York to Auckland is one of the longest flights in the world, or will be when Air New Zealand offers it later this year. Because the flight is roughly 17 hours and 40 minutes, the airline has been working on how to make Economy passengers more comfortable for the duration. 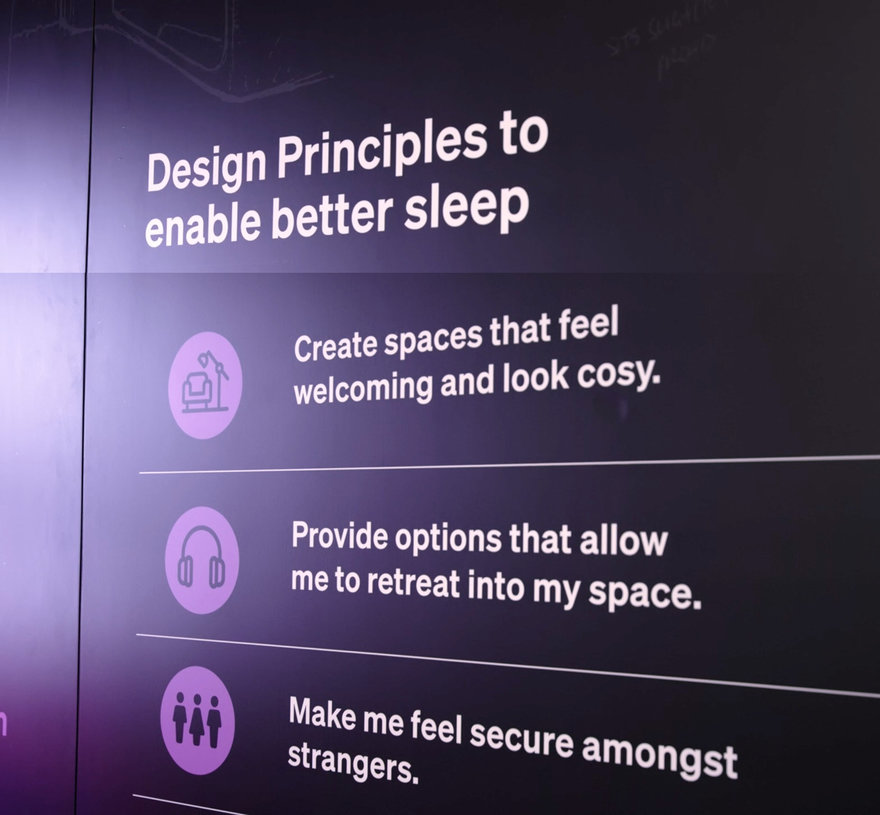 Just yesterday ANZ pulled the sheets off of their Economy Skynest, which took three years to develop. (And props to them for giving the industrial designers on the project, Kate Cameron-Donald and Zoe Wenn, some screen time in the introductory video.) 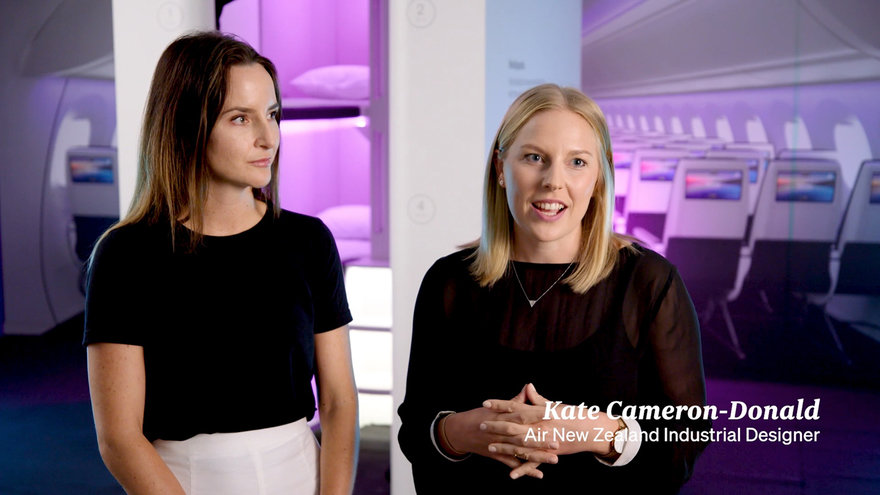 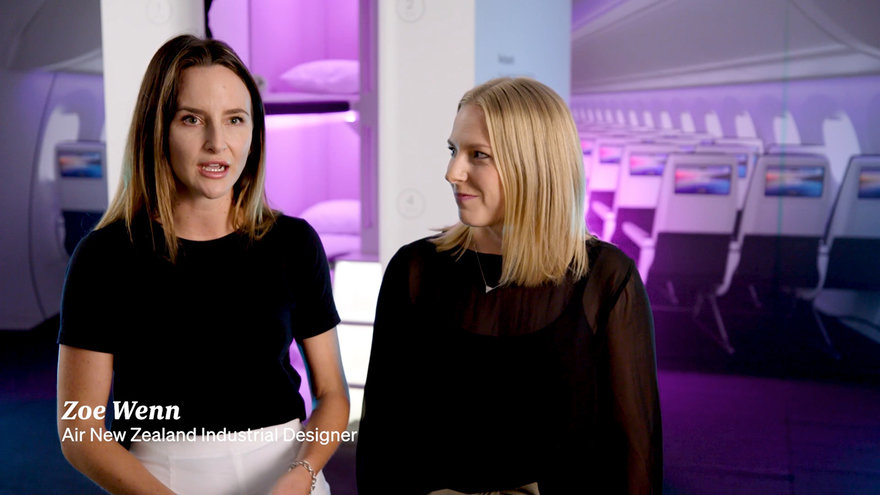 The Skynest is a well-designed tower containing six bunks, with three levels on either side. Roughly rectangular in plan view, it features a V-shaped opening that provides access. 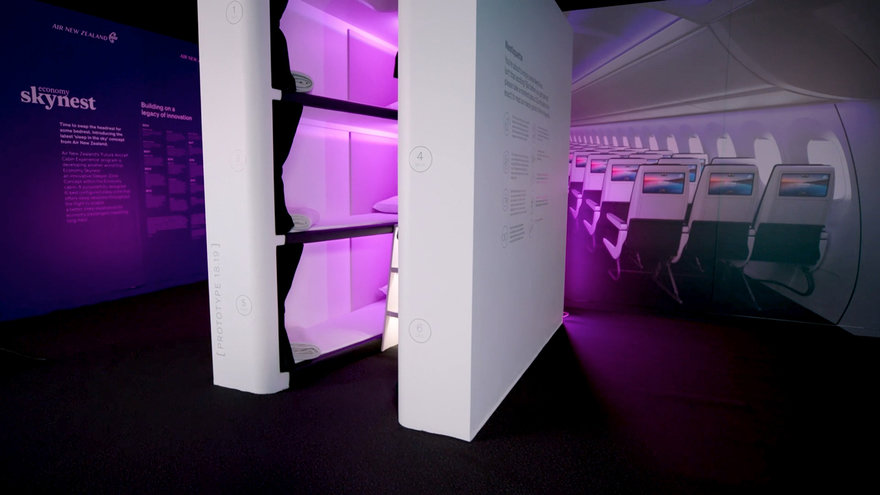 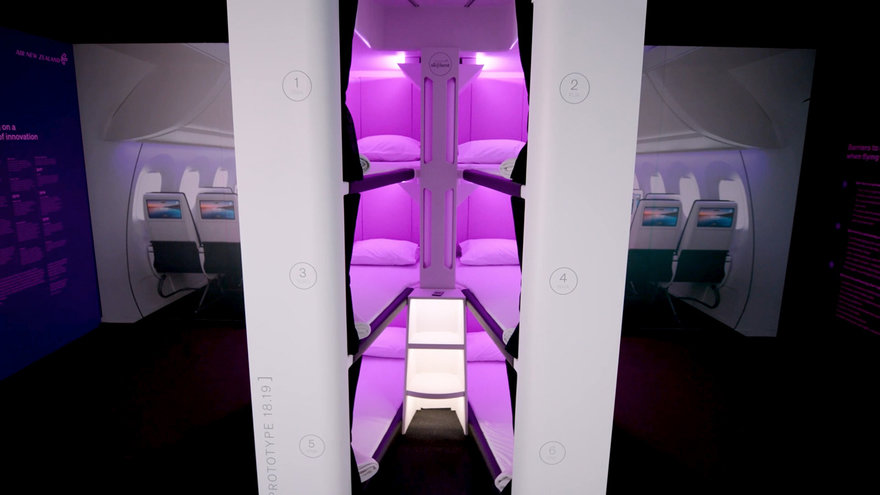 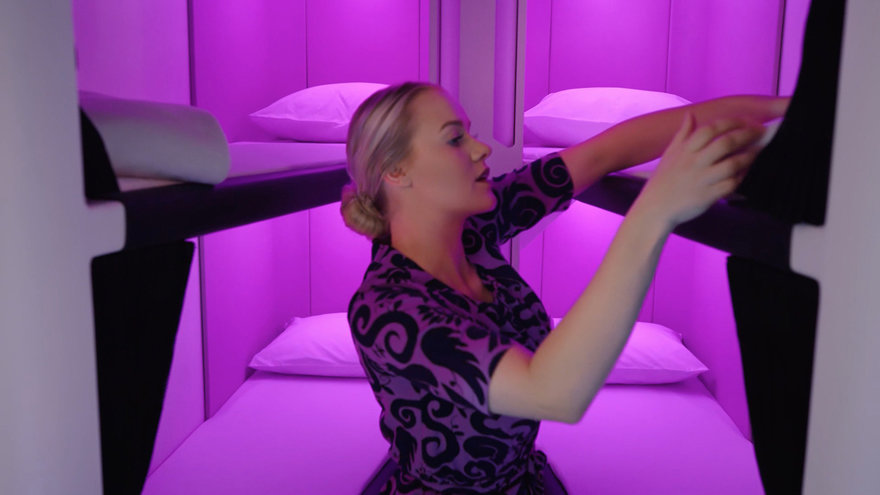 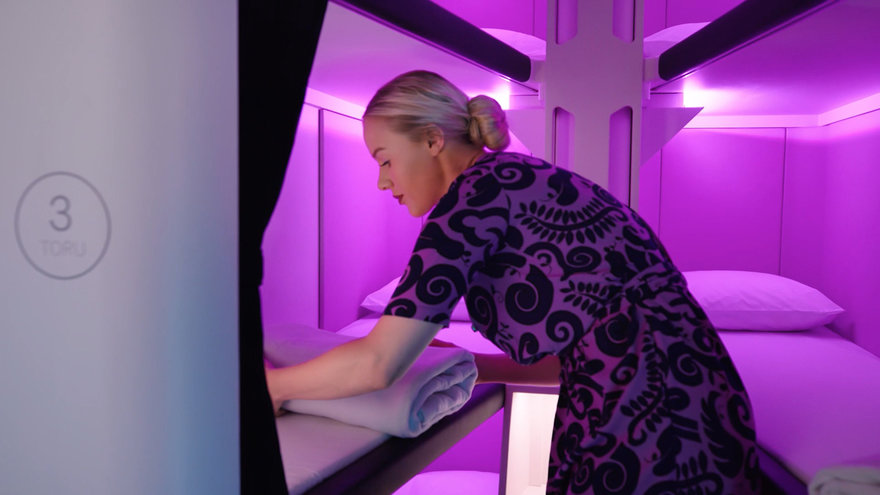 That V-shape perfectly jives with the shape of the mattresses, which are narrower at the feet and wider towards the head and shoulders of the passenger. 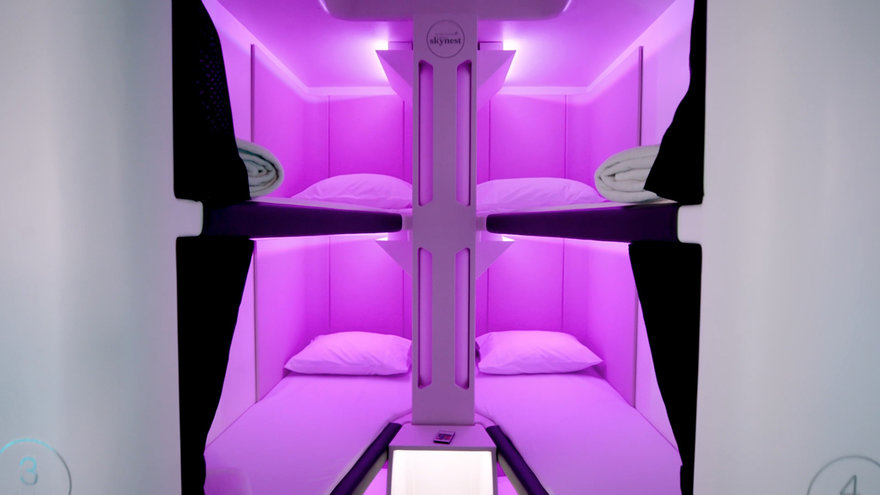 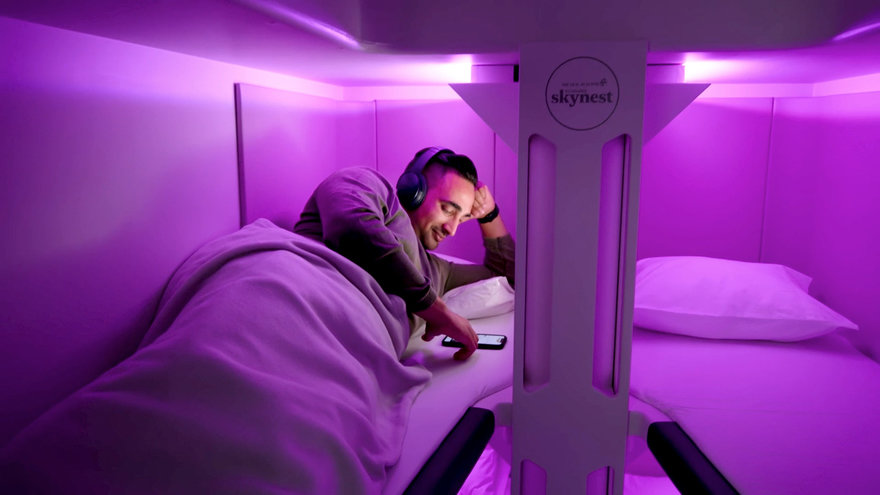 Although passengers on the same bunk levels are essentially lying side-by-side, privacy is conferred by a torso-length dividing panel, and its relatively wide fascia ensures you can't see much more than your level-mate's shins and feet. 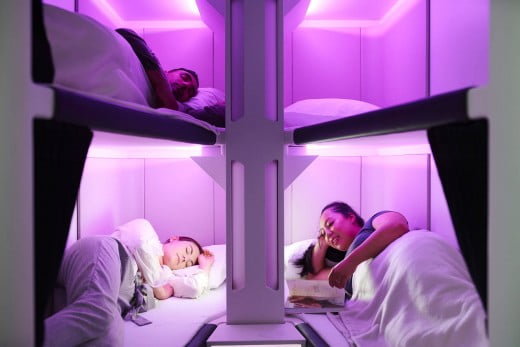 There are also curtains you can draw, if you desire a complete blackout. 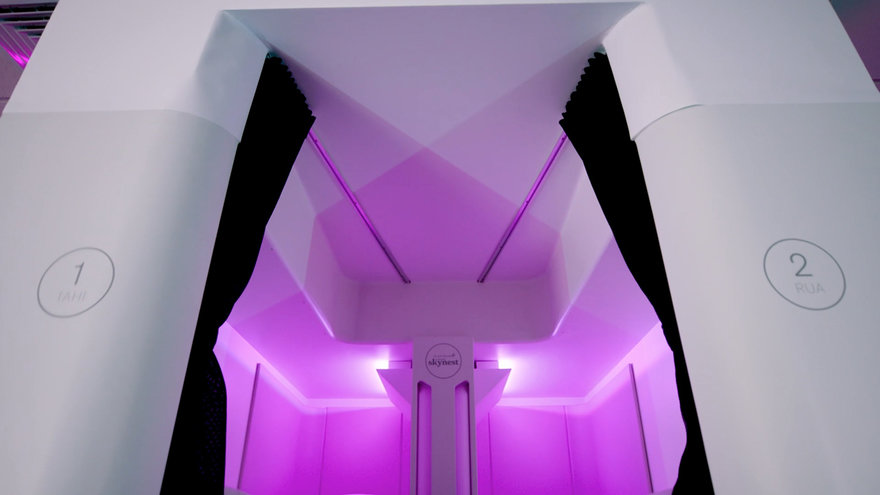 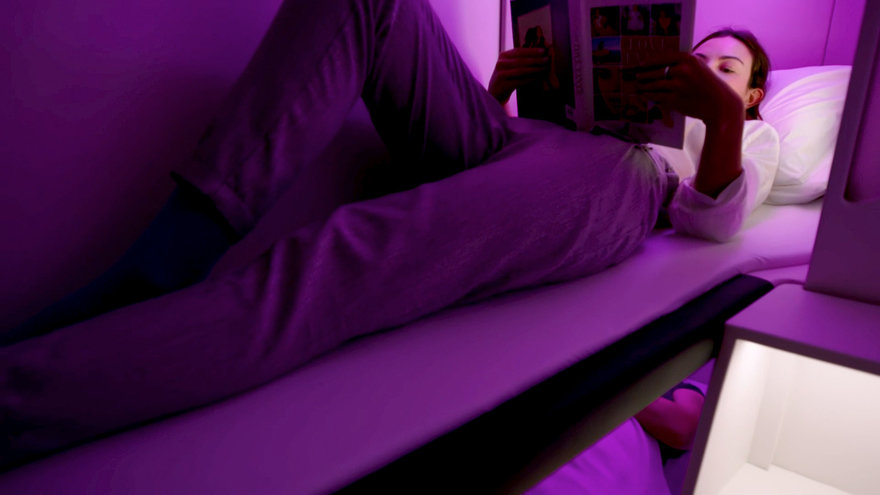 The top bunk is accessed by a small series of steps. I think for decency's sake the young and spry should be assigned to these, while elderly folk or those with mobility issues should be offered the mid-level bunks. 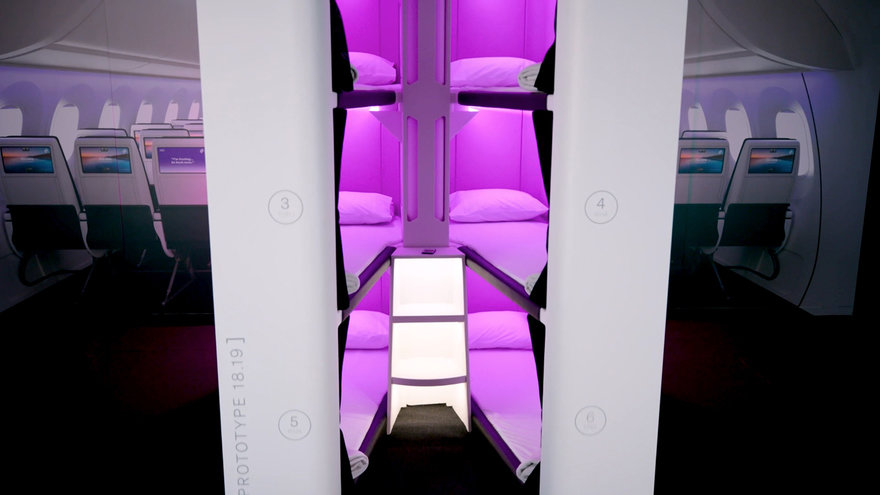 I say "assigned" because it's not clear if specific bunks are reserved for specific passengers, or if it's first-come-first-served. The plan is to have these pods in the Economy cabin (exact location TBD), and "an economy-class customer on long-haul flights would be able to book the Economy Skynest in addition to their Economy seat," explains Nikki Goodman, ANZ General Manager of Customer Experience. "[They would] get some quality rest and arrive at their destination ready to go. This is a game changer on so many levels."

The price of the Economy seat along with a Skynest booking has not been announced, but we assume they would still be less than a Business Class ticket.

Of course, this is all dependent on whether the Skynest gets greenlit. "Air New Zealand will make a final decision on whether to operate the Economy Skynest next year," the company writes, "after it has assessed the performance of its inaugural year of Auckland-New York operations." Fingers crossed.

Here's video footage of the Skynest: