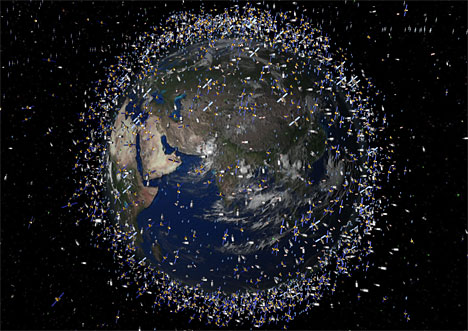 This appeared on Gizmodo last Friday, but was too depressing to post for the weekend. Then it seemed too depressing to start the week off on Monday, and now that it's Wednesday, well, you get the idea. There's not much to comment on here that isn't self-explanatory, and certainly this isn't a problem we weren't aware of before, but if you need more reasons for designers to stop the madness and take account of the consequences for everything they put into the world--or out of the world in this instance--then sure, bookmark away. Seems things are a LOT worse than was previously thought. Here's Gizmodo:

The European Space Agency has just released images showing all the satellites and human-made debris now orbiting space as a result of 51 years of launching stuff since Sputnik. That's about 6,000 satellites up thereâ€”of which only 800 remain operationalâ€”plus thousands of other objects from launches and accidents. According to their mindblowing simulations things are getting a lot worse...While the idea of bringing back used stages and satellites back to Earth may seem too expensive, in the long run it's clear that leaving all this trash up there is going to have huge consequences to the development of space exploration and colonization. Those concepts may still seem science fiction for many, but as these simulations show, the current and future problem is very real, and could be extremely dangerous.