The fashion-tech pioneer's textile project pays tribute to the women of the Bauhaus and Jacquard looms and opens new possibilities for contemporary designers.

"Once I understand the soul of a machine, then I can talk with it," says Lisa Lang. As the founder of Elektrocouture, a fashion company that melds traditional craft and technology to create jewelry and clothing embedded with glowing electronics, Lang has had plenty of interesting conversations with machines—and she takes particular pleasure in introducing them to other creative people. "I'm a bit of a fusionist—I bring technology and design together," she says. "I talk and work with very different people—like machine engineers, painters, astronauts, robots and fashion designers. I listen to their stories and knowledge and in the end, I bring them together. I simply just build the bridge so they can meet."

For her latest project, Lang is working with automated knitting machines that she and her team have hacked to enable artists to turn their designs into textiles. They call this new venture OFundamento, and their first collection, currently live on Kickstarter, features pillows, scarves, blankets, and ponchos created in collaboration with German pattern designer Anna Niestroj and Portuguese artist Graça Paz. 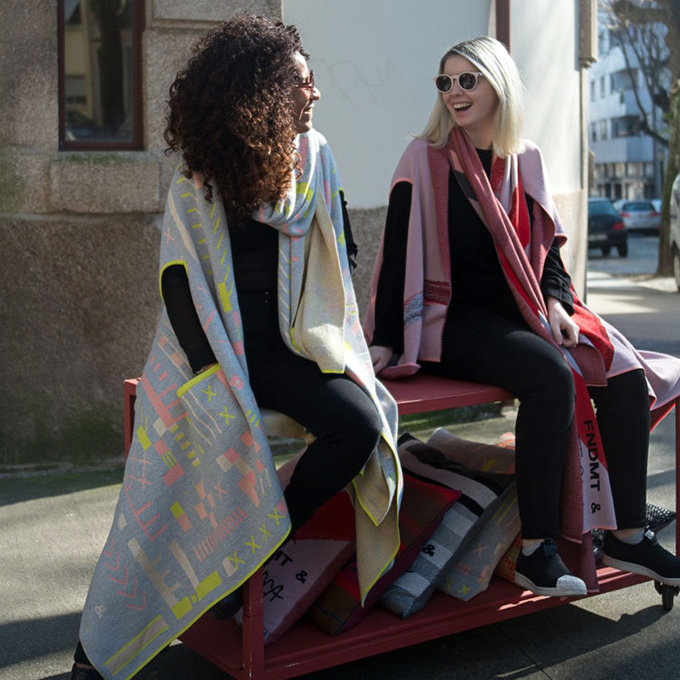 Part of Lang's inspiration for OFundamento came from an "enlightening moment" she experienced while visiting the Bauhaus museum in Dessau, Germany. The famed art school, which operated across three sites in Germany from 1919 to 1933, established modern design principles like "form follows function" that continue to guide designers today. Bauhaus designers and artists were among the first to embrace mass production techniques—and technology in general—as tools that could enhance an individual's creative expression.

While the Bauhaus's most recognizable names are architects like Mies van der Rohe and painters like Paul Klee, Lang recognized kindred spirits in a lesser-known—but no less innovative—area of the school's work. "I listened to the story of the textile department at the Bauhaus and how the students (mainly women) collaborated with the textile industry to try new patterns. Then I saw a sketch from one of the students—it was a grid! They drew grids and filled out every pixel with patterns and colors. That's where these distinct Bauhaus patterns came from—they understood how the machine thinks," she explains, tracing a direct lineage between her work and the women pushing the limits of textile design at the Bauhaus. 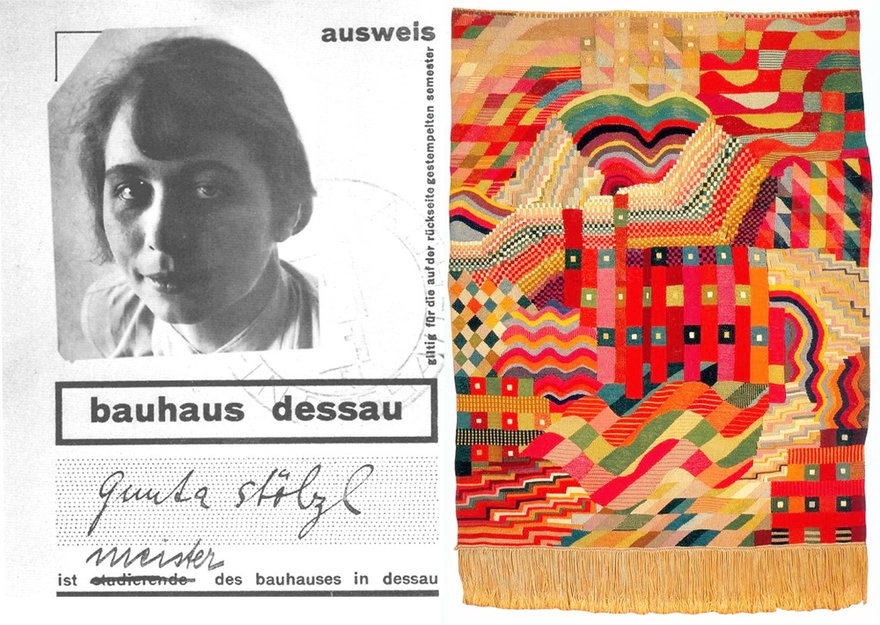 While the Bauhaus's approach to art education was progressive in many regards, it was also imbued with a deep institutional sexism that limited the opportunities of female teachers and students. The school's founder, Walter Gropius, famously believed that only men were suited to pursue three-dimensional mediums like architecture and sculpture—and that women should stick to two-dimensional work like painting and weaving. Despite the constraints the women in the school's textile department faced, Lang recognizes just how groundbreaking and technically sophisticated their work was. "They were some of the first machine hackers," she says. "Anni Albers and Gunta Stölzl were masters of this. It must have been such hard work to 'program' and set the machines manually back then. These days I simply have to write a piece of software." 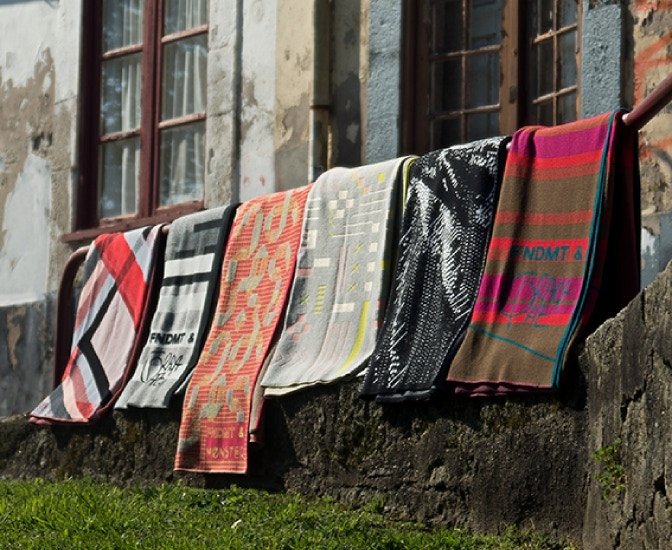 The patterns Anna Niestroj and Graça Paz created for OFundamento's inaugural line adopt the high-contrast palettes and intricate geometries of Bauhaus textiles but have a pixelated quality that makes them feel distinctly contemporary. Translating their designs into a digital pattern that a machine could knit from sustainably sourced yarn was an interesting creative challenge for Lang and her team of technologists.
"Graça's designs are painted on timber, so we actually had the pattern of timber coming through the paint and showing on the sides of the paintings," Lang explains. "Instead of cutting them out or cleaning it up, we decided to leave it. That's why you can see a pixelated version of timber patterns in Graça's black and white design—we didn't try to hide it, we simply elevated it." 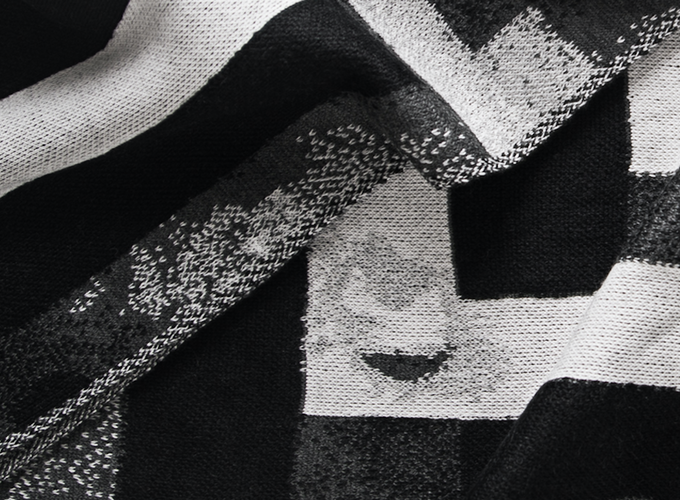 One of Graça Paz's patterns for OFundamento

"With Anna's design the challenge was different," she says. "Her designs were already in a digital format but they had thousands of different shades and dimensions. Since we're working with four colors maximum, we had to break down to the basics. I was careful not to break the spirit of the designs. I'm proud that we ended up elevating her patterns—you get an immediate emotional response when you see them, there is a connection straight away." 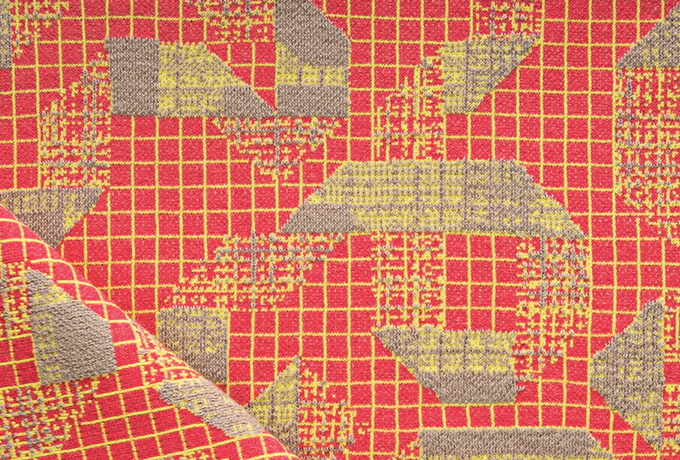 The 100-year lineage of the Bauhaus isn't Lang's oldest historical reference point for the project. "The first computer was actually a textile machine," she explains, describing Joseph Marie Jacquard's early 19th-century loom and other early automated weaving machines, which used the on-off digital logic of punch cards to program patterns. "They have blanks and holes. These are the grandparents of the one and zero of binary code."

Modern knitting machines are controlled by computers rather than punch cards, but are not easy for artists and textile designers to operate. "Usually these machines are very hard to access: the industrial knitting machines are highly sophisticated and it takes an engineer to program them. I find it almost poetic that we're bringing that old knowledge back to its roots to enable artists to talk to the machines."
Digital fabrication tools like 3D printers and CNC mills have become increasingly common parts of designers' and artists' practices. In a moment when technological innovation often feels like the norm rather than the exception, it's easy to forget that, until recently, devices that could turn digital designs into physical objects felt like science fiction. As a creator whose work has long combined traditional craft and cutting-edge technology, Lang embraces digital knitting machines as both a connection to the past and as tools that can empower designers to push the future of fashion in a new direction. "I was always fascinated by these industrial machines," she says. "They are a bit like spaceships for me—they can transport you to a different dimension"