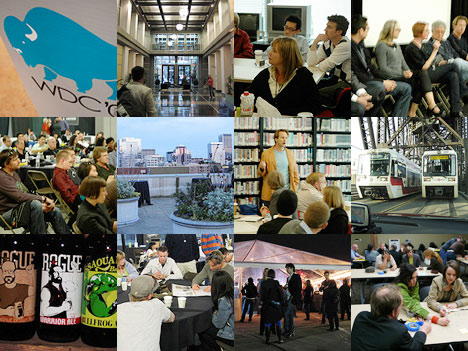 The Western District is over, Art Institute of Portland is back to normal, and we haven't covered nearly half the useful and thought-provoking things that got said and done over the past weekend. In addition to the talks and student work already mentioned, a couple more highlights after the jump:- Winston Wang, of T-Mobile's young-ish Creation Center, gave a veritable firehose of information on design for mobile computing and communication. Far too much to summarize here, but one major "why didn't I think of that?" observation:

Up until now, the digital world has worked on a physical paradigm, "mirroring" the real world in terms of relationships, tools, etc, but substituting an online avatar for the actual person. As computing becomes mobile, though, making connections in physical space and virtual space begin to merge -- i.e. meeting someone or attending an event will have interrelated real and digital components, and this, according to Wang, makes industrial designers crucial in designing the next wave of mobile computing. Nice to know we're still needed.

- Wibke Fleischer and Tom Lakovic of Ziba, on the other hand, started with a nearly opposite thesis: as the physical part of many designed objects becomes smaller and less apparent, is there still a need for industrial designers? The argument took the form of histories of the TV, telephone and computer, noting how each has gone from something resembling a piece of furniture, to a piece art, then a brick, and finally a slim rectangle.

"All that's left of the object," noted Lakovic of a flatscreen TV, "is a two inch frame around the screen...and if we could get rid of that, I'm sure we would." The recurring theme of Multi-disciplinary Design came up as a likely solution, noting that ID in the future will be more concerned with the experience than the object (yeah, we've heard that once or twice), and as such will work hand-in-hand with the sort of compatriots who never set foot in the offices of Loewy or Dreyfuss: psychologists, interaction designers, sociologists, motion graphics artists. Nice to know we're not alone.

-Frank Tyneski, new Executive Director of the IDSA, explained some of his vision for the future of the organization. As the first working designer to hold the helm, Frank brings a credible urge to change the role of IDSA in the next few years, including an acknowledgement of the degree to which sites like Core77 sometimes usurp the IDSA as the public face of the field. The image used to drive this home in his presentation: a 40-something suit named IDSA throwing his arm over a mohawk-topped punk rocker named Core7. Frank, if you've got that slide handy, can we get a copy?

-University of Oregon's soon-to-launch Product Design Program co-sponsored a design charrette Sunday morning on the very Portland-appropriate problem of getting bikes and cars to function together smoothly and safely. Attendees included an array of visiting and local designers, representatives from Portland's Department of Transportation, and local biking advocate celebrity Jonathan Maus of BikePortland.org, who has this pre-game post up, and more news expected to come.

Other information, comments, suggestions for the future? Check the discussion thread and have your say.