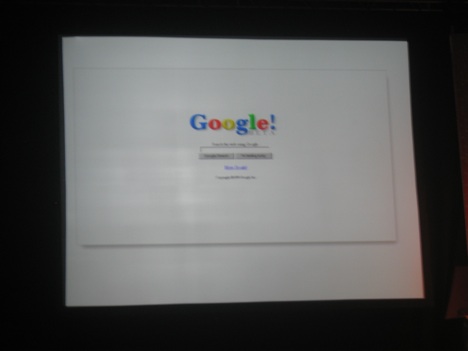 Remember this guy? After more of the rockin' 80s soundtrack (more Madonna, please!), we have Irene Au, director of user experience at Google (it seems somehow dirty and obvious to link to that). I know, you don't always think Google=design. But to her, fast=design, easy=design and profitable=design. Au shows a video from their usability labs where they studied behavior and eye movements of probably the worst Googler in the world (he was shopping for a flat-screen television and Googled "television"). Yet it proves a good point. In its success, Google's user experience has undergone a huge transformation. When they started, they were only used by tech-savvy Silicon Valley hipsters. Now 70% of their traffic is from outside the U.S and they've had to completely reconsider how they are used in places that aren't, like, American. Here's one especially striking comment from a clip she shows of cell phone user research. It's shot in India, where a woman opens a window in her house by rolling up a plastic tarp on her tent: "We can miss a meal a day, but we cannot miss a day on our mobile phones. It will affect all our work and our lives." So look forward to that option somehow incorporated into your new Google Phone. 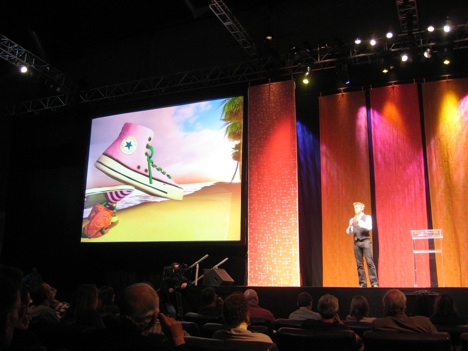 Now we're entering Second Life. Well, not really, but it's a slideshow of images from the metaverse. Second Life founder Philip Rosedale loved stuff like Star Trek so much he built a roof hatch with a garage door in the ceiling of his room as a kid. He says the parallels of SL growth are so similar to the internet in the 90s that we should not be afraid of alternate universes, especially since, according to Rosedale, Second Life will someday be bigger then the web(!). Huh? Well, he says, because the web connects text to text, whereas a place like SL connects infinite imagery and descriptions and users' creations. But although he is standing in front of images of chesty women in swan costumes, Rosedale barely scratches the surface of the whole Second Life culture and all of the ahem, ethical issues therein (like, he just casually mentions that you can buy a baby in Second Life). Also? He is way too good-looking in real life to be the ultranerd he professes to be. He's like the Ryan Seacrest of gaming. He is probably the only person in SL whose avatar is actually less attractive. 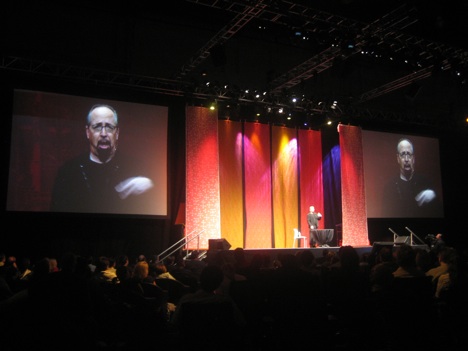 Sleight-of-hand artist Jamy Ian Swiss says he often teaches his brand of magic to magicians and the one thing you have to remember is that the method is not the trick. And guess what: He's going to show us his magic secrets! Wait a second, I didn't think magicians were supposed to reveal their tricks. Does that mean he's going to get jumped by a bunch of magicians in the parking lot later?

No, he's just going to show us the method and the method is not the trick. It's more body language, fast-talk, creating suspense. Just like the standard romantic comedy ("RomCom" he says), everyone always knows what's going to happen. But no matter how many seemingly easy ways he shows to transfer cards through decks, how many ways he shows to make coins disappear, there are no magic lessons imparted here. Swiss will not be knocked off by a surly troupe of sorcerers on the way back to NY.

And while not quite *magic* secrets, here's something I thought might be infinitely more valuable. It's Google's list of 10 things they've learned. Ta-dah! 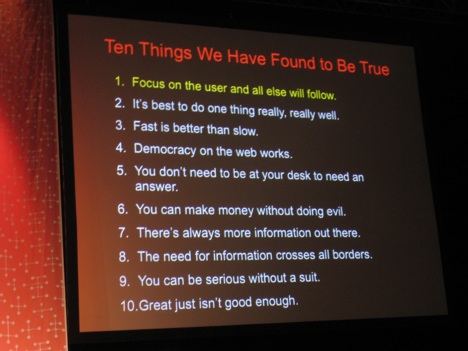