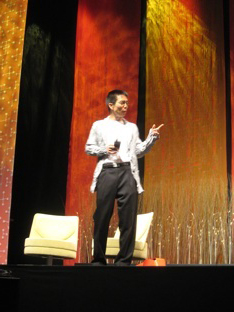 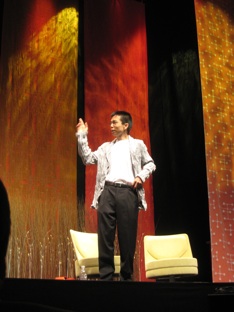 John Maeda! John Maeda! hit the stage this morning wearing a super snazzy crumpled silver jacket (or maybe the iron didn't work in his hotel, but no matter: he wears it well). "I'm getting kinda tired of talking about simplicity, actually," he says, "So I'm going to do complexity." I feel a major Maeda crush coming on.

Maeda grew up working in his father's tofu factory and like all creatives, his parents told him not to be creative. Instead he majored in math at MIT, but he just so happened to start working when computers got visual. He became a self-professed "icon master" until he discovered Paul Rand. And realized how bad he was at design. So he went to design school. He started learning how to make his design work move and flail about on the screen and his design teachers told him to stop it. And it was right around then he noticed a now-famous quote from Rand: "A Yale student said, 'I came here to learn how to design, not to learn how to use a computer.' Design schools take heed." 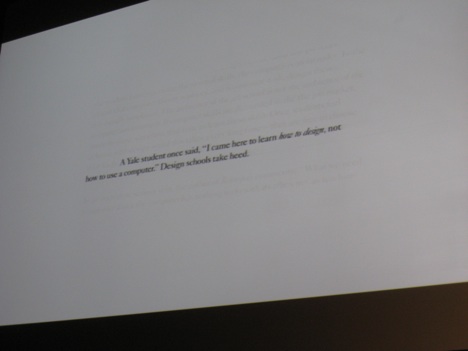 But Maeda was taking heed for another reason: He was bummed to see the convergence of design and computers relegated to a dingy, dirty "computer room." He embarked upon a quest to bring the two together. But as far as we can tell, the evolution of a graphic designer who works successfully with the computer goes like this: Get interested in something, explore the heck out of it, then move on. So play with old computers, create abstract art using old technology, mess with plastic, make huge installations of blue painter's tape (at this point his wife got worried about him), light boxes, little computers, lamps, iPod art, shoes for Reebok, and voila, become the president of RISD. 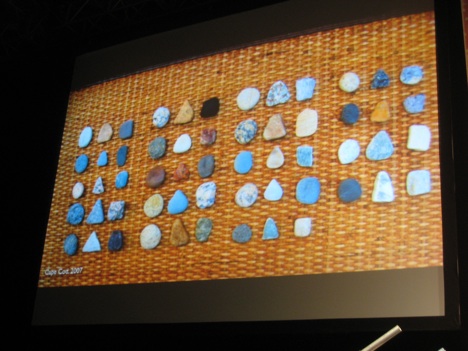 "The world is just so tasty!" says Maeda with such exuberance everyone giggles with him. He shows two sticks on the sidewalk in Paris. Of course he saw they were exquisitely placed at a right angle: "I saw where nature had made a picture for me!" Another arrangement of rocks in a circle-triangle-square pattern, rock twins separated at birth; John Maeda is what's tasty. He looks for little signs like this everywhere. For example, his old home MIT was right for him because it was found in siMplIciTy. But then he realized that RISD was found in the French version: RaISon D'etre. "So I realized it was okay to go." (Does that mean he's going to change the name of his blog?) So off he goes to RISD and it's hard not to cheer for him a little when he says: "It's not about making the world more technological anymore, it's about how to make it more humane again." Love him!