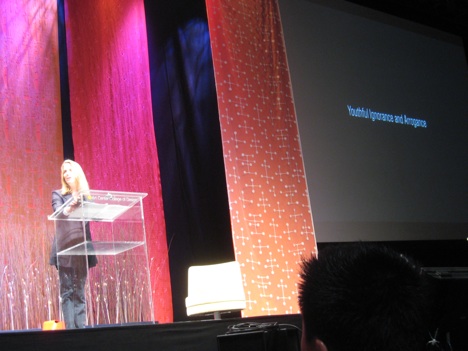 Always the overachiever, Paula Scher actually looked up what 'play' meant in the dictionary. Play equals what we usually think of, kids playing, but it also means gambling, and if you're not gambling with your work, then you're not, as they say, in the game. But being 'serious' about something, says Scher, is very different from being solemn--when you're solemn, that means you're not playing anymore.

During what she calls her youthful arrogant years, she detested Helvetica (You remember her badmouthing Helvetica, don't you? Saying it was the typeface of Vietnam?). But her hatred pushed her into a very serious "brat"-like play with all the crazy Art Deco-like type you've come to know. And this resulted in some pretty serious work. But she didn't get serious about it again for about 14 years, when she worked on the Public Theater's identity. And suddenly this amazing, very serious, very playful work emerged that shook up everything in design. But what happened? "New York ate my identity," she says. Designers everywhere ripped her off, organizations copied the look. So she had to switch it up, and all her work since then has been solemn. Solid, but solemn.Scher also found a way to be serious by taking on gigs in cases when she was "Totally Unqualified for the Job." She began to be asked by architects to work on the design of cultural spaces and she immediately asked, "Why can't there be signage on the floor? New Yorkers like to look at their feet." Turns out actors take cues from markings on the floor so it was actually perfect. On her New Jersey Performing Arts Center she was able to cover an entire building, even the a/c ducts, with words. But for everything she did, once it began embraced by expensive places and important companies, it was all over for her. She even diagrammed this process out into a cycle. 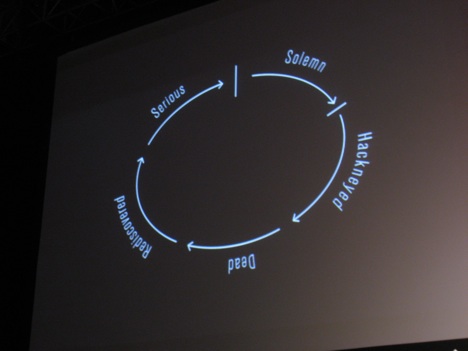 One of her most famous pieces of work, the Citi logo, she actually sketched on a napkin right away, but she then spent a horrendous year trying to sell it through. Out of this extremely stressful time came her maps, which somehow soothed her by creating and organizing her own information. But after she had a gallery show and sold some, the pain of having to produce more on demand for her next show started to set in. It wasn't fun. And it wasn't play anymore. But now she has to find a way to turn that solemnity to seriousness again. So if you ever feel yourself in that same situation, which we all do from time to time, try go back to that time of being youthful and arrogant, taking jobs where you have no idea what you're talking about, and get serious. 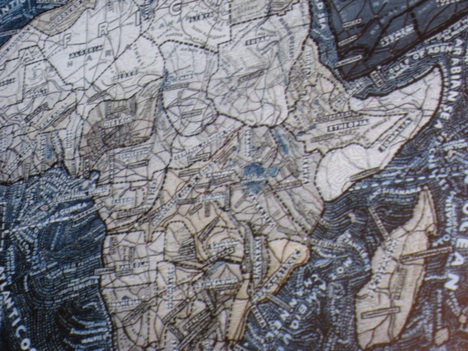