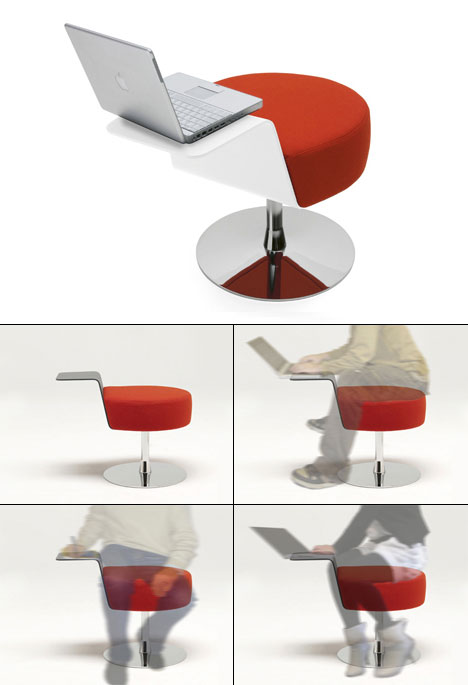 Frank Lloyd Wright, Mies van der Rohe, and Charles Rennie Mackintosh all designed iconic chairs; but it was Raj, Dwayne, and Rerun--the cast of What's Happening--that sat iconically. Every time they were in Rob's Diner they turned the chairs around and straddled them backwards.

Raj and the boys would have felt right at home in Andrea Ruggiero's Tempo chair, an unusual seat that forgoes a back in recognition of the fact that, well, there are plenty of people who don't sit normally. The brief from Swedish furniture manufacturer Offecct asked Ruggiero to explore "new ways of sitting," and the NYC-based designer came up with an attached surface that can be used as a laptop perch or a writing surface.

Would the Tempo be comfortable long-term? Maybe or maybe not, but that's besides the point:

Tempo addresses the need for informal, transitional seating in public spaces--where people transiting from one fixed or formal situation to another can sit and have a short break, take notes, type an email, or have an impromptu meeting.

"Offecct's brief presented a distinct opportunity and helped identify a need for informal short-term seating in public spaces," explains Andrea Ruggiero. "However, the tricky part was resolving the ergonomic issues associated with the different sitting positions, while ensuring that it could be used comfortably by a diverse user group." Prototype testing and user evaluation was conducted with a broad range of users, ranging from petite females to large males.

We know at least one large male who would've loved the Tempo. RIP, Rerun.