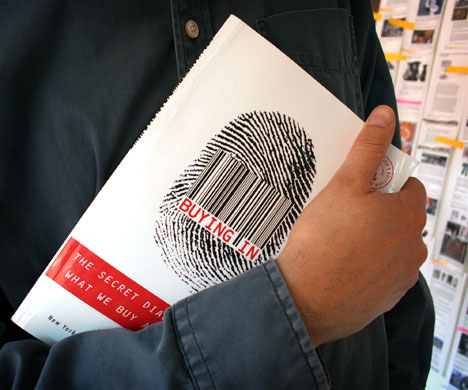 The turn of phrase "buying in" could mean ponying up enough coin to get a seat at a high stakes poker game or changing one's mindset to encompass a radical ideology. Rob Walker is the author of the "Consumed" column for the New York Times Magazine, so he is clearly familiar with ambiguously subtextual titles (since consumption connotes both a state of obsession and its untidy aftermath . . . both of which should be viscerally familiar to most Americans). His new book Buying In: The Secret Dialogue Between What We Buy and Who We Are, delves into the attitudes of the global consumer in the age of plenty, and, well, we aren't too pretty.

Walker carries the reader on a frenetically paced tour of senseless consumption spanning from Viking ranges to custom high-tops. Along the way he introduces the reader to a diverse cast of characters like Dietrich Mateschitz, the entrepreneur who brought the world Red Bull, the sponsor of both the Flugtag air races, and in the opposite direction, the late night drunken falls of people who've imbibed too much alcohol along with the cough syrup caffeinated punch of that narrow little can. Other characters include an assortment of white guys without any discernable street-cred who've managed to build clothing empires around hip-hop and urban culture, and even viral marketers who pretend to be customers, proselytizing to others about the merits of products (and apparently not always disclosing their affiliations).

By presenting both uber-consumers and the professionals who deal with trying to sell us the stuff to fill our endless appetites, or the holes in our souls, Walker indirectly addresses what he coins the "pretty good" problem: What distinguishes a product when assembly lines or underpaid third-world workers can make even the cheapest products "pretty good?" Since quality really isn't much of a criterion any more, there must be other signifiers, and that's where our subconscious steps in.

Most of us have been inundated with advertising for our whole lives, so on some level we know that we're being sold ... which is why some hipster crowds gathered around PBR precisely because they weren't being given the hard sell. So if somebody cracks open a can now, knowing that the trend is played out, what does that act of consumer disobedience say about them? Now that PBR is so "yesterday," shouldn't that make it cool again? Plus, the conception of consumption as a statement is in itself reflexive. In other words, if a hipster cracks open a can in the forest and there's no one around to hear it, are they still being cool? It gets pretty meta.And that's Walkers thesis. He coins his own portmanteau for the way that advertisers can take advantage of that and calls it "murketing." Murketing, then is that nexus between murkiness and marketing where buyers can project their own desires or aspirations on to the products that they buy. In examining the psychological motivations that drive this rampant consumerism, Walker references some of the best psychologists and researchers on the subject, including Mihaly Csikszentmihalyi, who's Flow should be required reading for anyone with an interest in being happy and who's The Meaning of Things happens to be a little more topical. I might also add Nancy Etcoff's Survival of the Prettiest, where the latter half of the book explains the nature of fashion (quite literally, in an evolutionary context).

The conclusion is that objects are only as totemic as we let them be. Walker even begins to hint at what might be a really interesting corollary, but it is left largely unexplored. For us, as industrial designers, if we're pondering the future, one must wonder what sort of value we can add to society. In a potential post-consumer future, where we've harnessed algae to transform sunlight into electricity, and where every home has a rapid prototype machine that uses organic compounds, how will we define wealth? Suddenly when everyone has access to flawless and pristine stuff, it's that scuffed up and worn armchair that has real value. Because even though I may love my sleek modern furniture in ways that might not quite be healthy, if my house was burning down I'd rescue the paintings given to me by my friends instead. Well, I admit that I might try to save my DVR too. In these modern days of plenty, it gets to see which commercials I fast forward through ... and which ones I rewind to catch again.