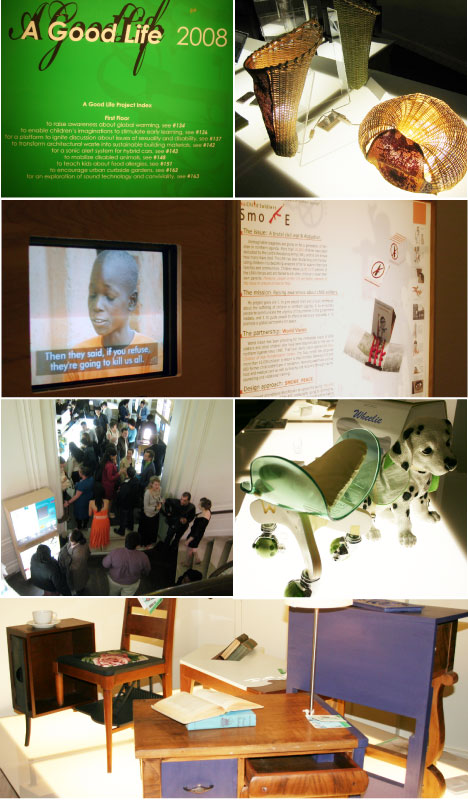 ICFF doesn't officially start until Saturday morning, but the offsite events are in full swing, starting with the Parsons School of Design senior project show, (very) loosely organized around the theme "A Good Life" (why do we always have to give these things themes, anyway?). Like most student shows, it was inspiring, exciting, and extremely mixed in execution -- but perhaps a bit more hopeful than usual, owing to an unusual tack Parsons is pursuing in the area of private sector partnership.

>>View all NY Design Week posts The tack is, they don't do private sector partnerships, but instead require all students to find and work with a non-profit organization with a cause allied to the topic they wish to pursue for the project, which lasts the entire fourth year of school. In some cases this yields some wonderful results: Amelia Amelia (her real name's Amelia Lnu, and if she doesn't become a famous designer with a name like that, it's nobody's fault but her own) worked with Materials for the Arts to create {UN}WANTED, a line of beautifully detailed hybrid furniture from cast-offs found on Manhattan streets, and Vivian Lam paired with both an American non-profit and a Cambodian NGO to create a line of ethereal bamboo canework lighting produced by Cambodian artisans. Other stand-outs included a matchbook-based promotional line designed to remind first-worlders of the reality of child soldierhood, and a composting system for urban elementary schools.

Robert Kirkbride, an associate professor in the program, explained that the student/non-profit affiliation will only get more formalized in coming school years, creating an exciting and viable alternative to the traditional corporate sponsorship that so far holds the standard for Real World Experience in the ID academic world. Execution of the projects so far is pretty good -- we were impressed by the clarity of many of the graphic and video displays, and the research books accompanying them, more rigorous than you often see in these types of shows. The underlying problems being addressed were a little more uneven. While we applaud the intention, several of the projects seemed to be solving problems that weren't really universal or urgent: a rather unrealistic finger-glove for protection against the filth of the public restroom handle, for example, or a wheelchair/scooter for injured pets -- both were cute and nicely-detailed, but considering the gravitas carried by some of their co-presenters, they come across as a bit silly. Overall, though, hats off to a professional-looking show and a refreshing departure from the weightless styling that often plagues student shows.