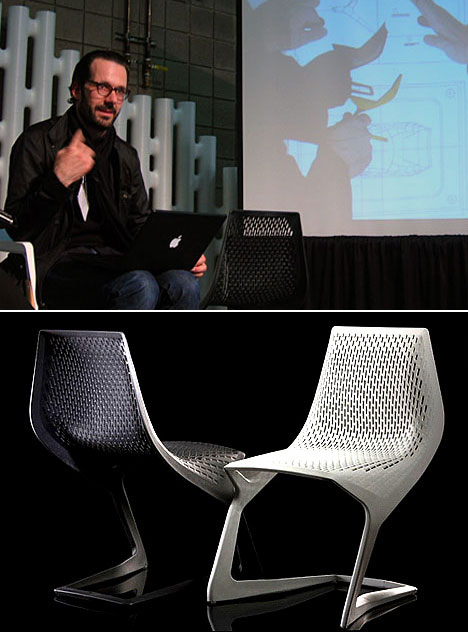 Major design crush object Konstantin Grcic took the stage yesterday afternoon at the Javits Center, to talk for an hour and a bit about his studio's newest baby: the BASF-sponsored one-piece plastic Myto Chair. An hour might seem a bit long to talk about a single piece of furniture -- a simple chair, especially -- but this was a fascinating talk, for a couple of reasons.

First off, it actually is something of a revolutionary design. Developed as a three-way partnership between KGID, German chemicals giant BASF, and Italian manufacturer Plank, the Myto wasn't even originally going to be a chair; Grcic was asked to simply develop a product to show off Ultradur B, a high-performance polymer previously used primarily in the auto industry. A chair was chosen as a clear, understandable expression of the unique strength and flow characteristics of the material -- designers with a background in injection-molding look at the chair with some astonishment, at its stiffness and thick sections without a hint of sink mark.

Second, Grcic's thought and design process has always been, and continues to be, a singularly fascinating and grounded thing. Unabashed about the long, arduous detailing process required by such a technical project, Grcic displayed a rendering from 6 weeks into the development cycle, noting "as you can see, it's pretty close [to the final product]. Well, actually, it's not close at all!" Hundreds of tiny alterations followed, and Grcic did a handy job of summarizing necessities like mold flow analysis, KGID's extensive use of full-scale sketch modeling, and multiple rounds of rapid prototyping (see tiny SLS, handed to BASF engineers as a sort of mid-project souvenir, above).

Grcic got noticeably more excited describing the manufacturing processes (there was a picture of him lying in the injection mold) than talking about, for example, the process of color selection ("We mold it in black, white, and grey, and some other colors people expect of a plastic chair...") A nice antidote to the shiny, production-ignoring perfection seen elsewhere at the fair.