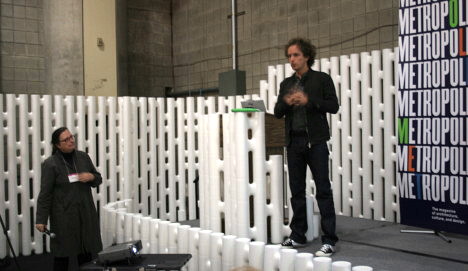 The Metropolis Conference on socially responsible design kicked off in the ICFF Theater this morning. Each speaker talked about their own practices and then how they balanced (or integrated) their socially responsible pro bono work into their work. With an open floor plan, nearby exhibitors could hear the presenters and window shoppers could catch an earful from Fritz Haeg or from Yves Behar as they wandered past. The ebb and flow of traffic and the occasional flashbulb of the crowds gave a visible indication of the design luminosity of the presenter. The endearingly cute $100 laptop prompted its fair share of flashes, though since Behar was using it as a gesticulating extension of his arm, it proved somewhat immune to photography.

>>View all NY Design Week postsHaeg, an architect (who lives in a geodesic dome!) spoke about his wide-ranging influences, which seemed to rival Bucky himself. He talked a lot about dance for an architect, but it was really about people, with the inclusion of material only as a means for tracking or representing the human traffic that mattered. After a short digression on his Animal Homes Exhibit at the Whitney, he discussed his Edible Estates project, which turned the water consumptive beast of the American lawn into far more useful gardens. As an aspiring locovore and Michael Pollanite, I'm prone to agree ... though perhaps my bad childhood memories of indentured servitude to my parents in the service of mowing contribute a bit.

The next two speakers were Ron Sheldon and Ron Vlasic of Kimpton Hotels. They showed an assortment of renovation projects in which they converted historically significant buildings into boutique hotels. When we focus on sustainability, the emphasis is usually on the beginning and end of the product lifecycle, but very rarely on the middle. Klimpton Hotels' mandate of building on the past rather than razing it to make space for the new happens to be both efficient and beautiful.

Yves Behar rounded up the morning's presenters with his discussion of his practice at fuseproject, and his dedication to pro-bono projects. He showed the nature of open source collaboration with his One Laptop per Child project, and also the power of public works projects in destigmatizing everyone's favorite product, the condom (ok, maybe not the Pope's favorite). Behar also provides some of the most strident prescriptions and a couple of worthwhile soundbites like, "Advertising is the price that you pay for unoriginality." More topically important, however, were his final comments that designers can't wait for corporations to begin to behave in a socially responsible manner. Instead, "designers were the glue" between corporations and the consumer collective. For us to reconcile these two disparate constituencies: "we simply couldn't wait; we have to push." We're quite fortunate not only that these individuals are pushing their clients, but also that their rhetoric and example can inspire and push us.