It's called a section liner or spacing parallel. Here's a rare example

As anyone who can read a blueprint or CAD drawing knows, cross-sections are indicated by cross-hatching. 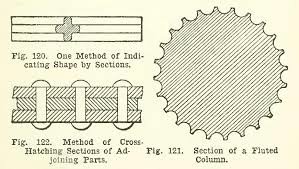 In my hand-drafting days we did this with an adjustable triangle and our eyeballs for spacing, but in the early 20th Century, drafting tools existed that let you dial in the precise distance between lines. Here's an example of one:

That's called a section liner or spacing parallel, and they came in a wide variety of designs from a number of manufacturers, as you can see over at the UK's Mathematical Instruments website. According to their archived catalog images, the one in the video appears to be from German drafting tools manufacturer Friedmann Bros., circa 1916, with the following catalog description:

"This instrument is easily operated without practice and with absolute accuracy. By means of an adjusting screw in the centre of the spring lever the distance required between each line is first set, then by simply pressing upon the set screw on the top of the moveable lever, equal spacing is obtained after each line is drawn."

Whoever owns the one in the video is a lucky person indeed; it appears to be in excellent shape, and these things are rare as heck. If you don't believe me, try finding one on the secondhand market.

(Then again, maybe there's tons of these sitting in attics and basements around the world, and people don't know what to call them, and thus they don't show up in searches.)