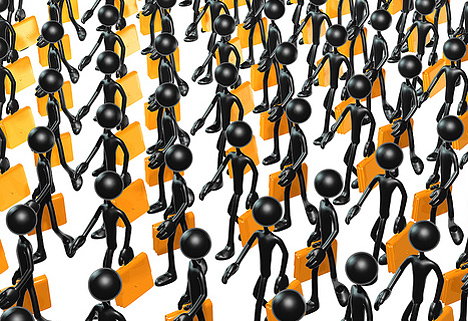 'What the hell is Design Leadership anyway?' is what I keep hearing people mutter under their breath these days.

It has become one of those subjects that any player in design now has to have an opinion on, but debating it usually generates more heat than light, as self-anointed design leaders rehearse their personal or company agendas. Self-importance, not clarity, seems to be the main concern. At one level this isn't surprising. Leadership is a slippery topic these days: there are more books on Amazon attempting to define the mojo of leadership than that other holy grail, innovation.

The 21st century is dogged by crises of authority: whether they are presidents, CEOs or premier league soccer managers, today's leaders are less respected and less certain of their position than the self-assured chiefs of yesteryear, like Margaret Thatcher, Jack Welch and Bill Shankly.

There are many different types of design leaders—and no common template. A corporate design manager helping to steer a company into an emerging market requires a very different skill set and approach from the head of a start-up consultancy pioneering new methods in the design of public services.

Having become a live topic in designland, leadership is now an even harder subject to get your arms around. Unlike business leadership, which is about leading organisations, the remit of design leadership is fuzzier. It is often used interchangeably with design management, but is also liberally applied to any big personality around the industry. Faced with such confusion it is worth stepping back to ask a few simple questions. What makes a design leader? Do they have to be designers? Who is leading whom? And to where exactly?

I have recently been forced to grapple with these questions while producing a Design Leadership programme for senior designers from a range of companies and disciplines.

Leaders as pathfinders First, it is useful to reflect on why Design Leadership has become such a hot topic. It began as a more specific 'grey hair' discussion within design management circles in the early noughties. But unlike other such debates this one captured the imagination of consultants, academia and the blogosphere.

What is driving this widely felt need for leadership? One answer is that designland is feeling a collective sense of both disorientation and opportunity— have designers ever felt so simultaneously highly valued and uncertain about their future? As I have previously argued in these pages the design industry is living through 'seismic times' and 'as the ground shifts under our feet, we scramble for a clearer view of the emerging landscape.' To push this geological metaphor further, the industry is looking for pathfinders to guide us through unfamiliar new territory to the land of opportunity.

Self-importance, not clarity, seems to be the main concern. At one level this isn't surprising. Leadership is a slippery topic these days: there are more books on Amazon attempting to define the mojo of leadership than that other holy grail, innovation.

Many new paths are being cleared in numerous directions—from selling one-offs in art galleries to facilitating co-creation processes—by very different types of pioneers with their own perspectives and tool sets. For me it is useful to think of design leaders as trailblazers taking design forward in different ways. They break new ground by envisaging and then helping to create the future shape of the profession.

10 faces of design leadership To illustrate the point here are 10 types of design leader who have pushed the boundaries of the profession over the past few decades— for good or bad. The categories are neither exhaustive, nor mutually exclusive... but hey, everyone loves (to hate) a list.

The Maestros Design craft leaders who have raised the bar in design practice. Exemplar practitioners who have set new standards in their own fields include Jonathan Ive, Naoto Fukasawa, Masamichi Udagawa and Sigi Moeslinger, Ronan and Erwan Bouroullec, and Thomas Heatherwick.

The Visionaries Discipline leaders who have pioneered new fields of practice, like Bill Moggridge in product interaction design; Ron Arad in design art; Larry Keeley in design strategy; and Live|Work in adapting product and interaction design methods to the design of services.

The Managers Corporate leaders who have led design to the top table in their companies and in turn elevated the design function, like J Mays as VP of design & Chief Creative Officer at Ford group, Chris Bangle at BMW, and Tom Ford at Gucci.

The Entrepreneurs Business leaders who have explored new ways of doing business in design, like Terence Conran as design consultant and retailer; David Kelly in the foundation of Ideo; and Tom Dixon with his unique combination of roles as designer, manufacturer and director of Artek.

The Ambassadors Communication leaders adept at accessing public, business and government forums to convey the benefits of design, like Richard Seymour and Dick Powell with their TV programmes; Clive Grinyer in various private and public sector roles; and Tim Brown, most notably at the World Economic Forum in Davos.

The Entertainers PR leaders who have captured the imagination of the non-design press and re-positioned what design means in the public consciousness—for better or for worse—like Philippe Starck, Karim Rashid, and Marcel Wanders.

The Scholars Education leaders who have pioneered new forms of design education, like Michael and Katherine McCoy at the Cranbrook Institute in the nineties; Gillian Crampton-Smith, the founder of both the Computer Related Design course at the RCA and the Interaction Design Institute Ivrea; Lidewij Edelkoort in her role as chairwoman at the Design Academy Eindhoven; and Patrick Whitney, Director of the Institute of Design at IIT. And let us not forget the unsung leaders of great courses, such as those at the Universities of Cincinnati and Northumbria.

The Provocateurs Thought leaders from outside designland who challenge its navel-gazing tendencies and cajole designers into reflecting on the context in which we work, like the ever polemical James Woudhuysen with his exposes of design's muddled thinking and low expectations; John Thackara in his eclectic dispatches from the fringes of design, art and environmentalism; Rick Poynor with his well aimed broadsides; and Roger Martin with his home truths on how designers are perceived by business people.

The Scribes Editorial leaders who have pioneered new forms of design journalism, like Deyan Sudjic with Blueprint; Jeremy Myerson with Design Week; Tyler Brule with Wallpaper and Monocle; Bruce Nussbaum at Business Week; the teams behind Core 77 and Design Observer.

The Curators Influential museum and gallery directors who have presented design in new ways to new audiences, like Stephen Bayley at the V&A Boilerhouse and the Design Museum; Paola Antonelli at MoMA; Alice Rawsthone at the Design Museum; Murray Moss at his Moss store; and Carla Sozzani at her 10 Corso Como store.

This is obviously a partial list—and some leaders could feature in several categories. For example, Steve Jobs is in a class of his own as not only a business but also a pivotal design leader for his sophisticated understanding of design and the exacting standards he holds Apple designers to. No matter. My point is to illustrate that there are many different types of design leaders —and no common template. A corporate design manager helping to steer a company into an emerging market requires a very different skill set and approach from the head of a start-up consultancy pioneering new methods in the design of public services.

Common qualities However, design leaders do tend to share three general qualities: they are good at envisioning the future, thinking strategically and leading others.

They tend to have mastered their professional craft and understand their field well, but are driven by a restless feeling in their gut that 'it doesn't have to be this way'. They have the ability to hover above the detail, see the big picture and think abstractly to imagine a different direction. Roger Martin unpicks this quality well in his book 'The Opposable Mind: How Successful Leaders Win Through Integrative Thinking'.

Having glimpsed a new horizon, the best leaders articulate a vision of how things should be. One of my all time favourites is the admirably audacious goal Steve Jobs set out for Apple back in 1980:

'To make a contribution to the world by making tools for the human mind that advance humankind.'

Having defined the aspiration, leaders set about working out how to get there. The way they develop their strategy differs enormously depending on the leader's goal, field and position. However, four useful questions to ask are: - what is changing and what opportunities flow from this change? - what core competencies do we have and which do we need to build? - how are we going to set ourselves apart from the competition? - where's the money?

Finally, to really make things happen, leaders have to get things done through others, by designing, inspiring and maintaining teams. They also often need to get people outside their team to buy into them, their idea or their business. This calls for both inspiration and tenacity.

Let's close by nailing two myths. The first is that leaders have to have big personalities; some do have larger-than-life egos, but many do not. Steve Jobs and Jonathan Ive occupy opposite ends of this ego spectrum.

The second myth is that leaders are born and not made. While it is true that not everyone has the potential to lead, all of the above traits can be developed and honed: even Steve Jobs rehearses his presentations to make them appear effortless. However, they are not skills that can be learned on a one-off course; they must be nurtured over years. Most top CEOs have coaches to help them become better leaders, they just tend to keep their coaching sessions quiet —often entering them into their diary as a 'haircut'!

So what the hell is a Design Leader? From Maestros to Scholars, there is no singular formula. While they are all visionary, tenacious and resourceful, ultimately what separates them from the smart talkers and false prophets is who follows them to change the world of design.

Kevin is the founder of Plan, a product strategy consultancy based in London.