The 20th century has seen radical changes through wars, struggles, political and social reforms, technological advancement, and globalization. Somewhere along the way, society has ignored the devastation it has caused to the human mind, in an effort to grow, by pushing forward ruthlessly. One manifestation of this damage is Post-Traumatic Stress Disorder. It is being understood as a condition that haunts survivors of all kinds of trauma. A traumatic event leaves behind imprinted memories that affect people and their families, histories and even cultures.

Project 'Reboot' blends statistical data with an experimental hypothesis, using an interdisciplinary methodology. It aims to create innovative tools to approach the complex subject of trauma. The prototype designed and developed for Reboot is a private space that alters sensory stimulus. Its purpose is to help an individual regain control over her/his emotions during a panic attack. This private space creates a safe barrier between the user and his/her external environment.

The study and accompanying prototype together represent phase 1 of the on-going research practice. Phase 2 is scheduled to commence at the end of the year 2020 under a funded residency.

Thanks to The New York PTSD Meetup group 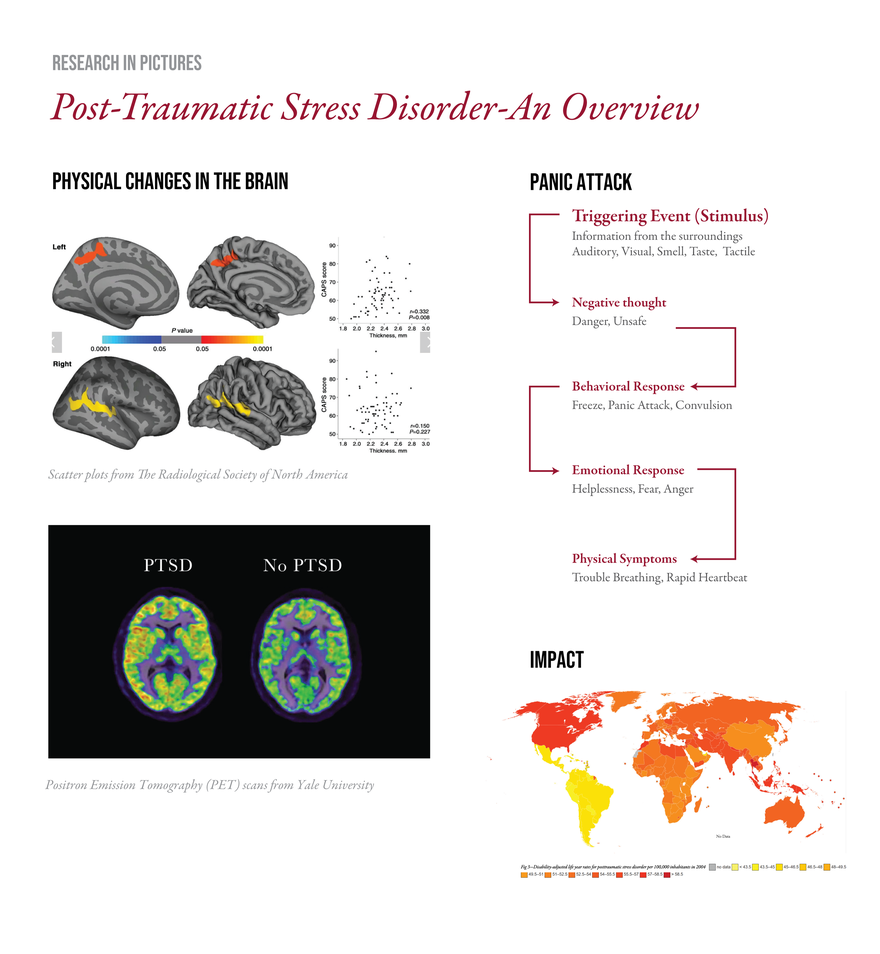 An Overview of PTSD 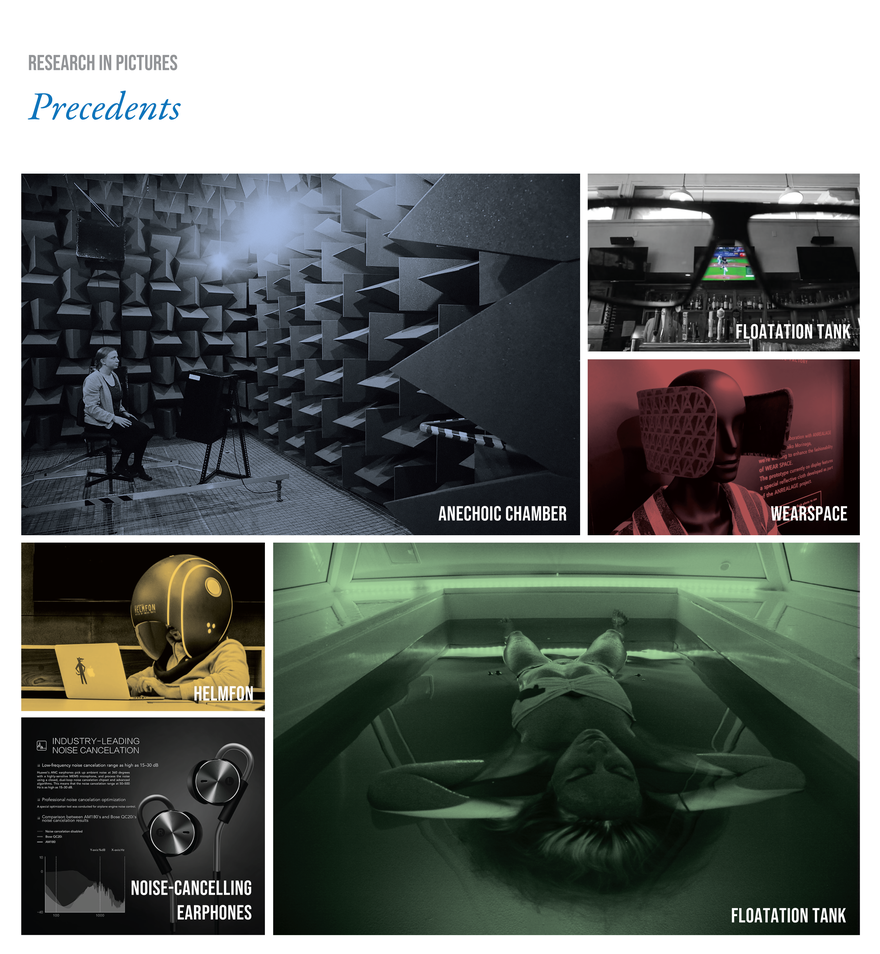 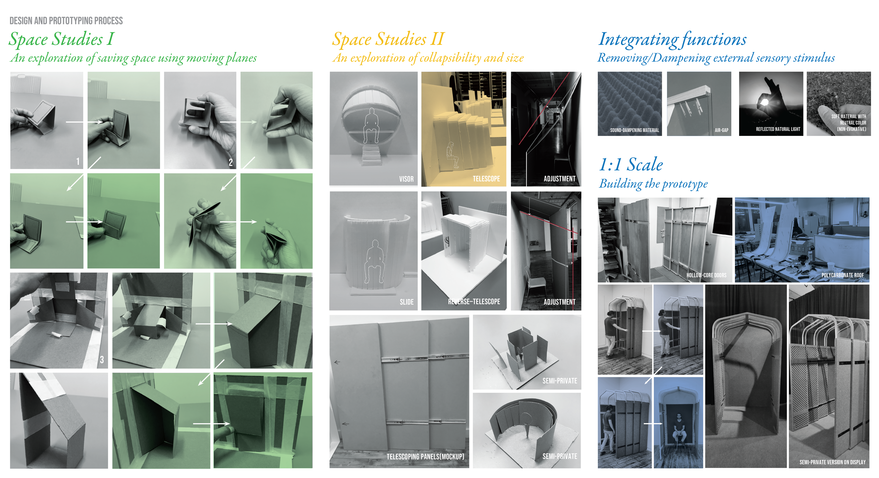 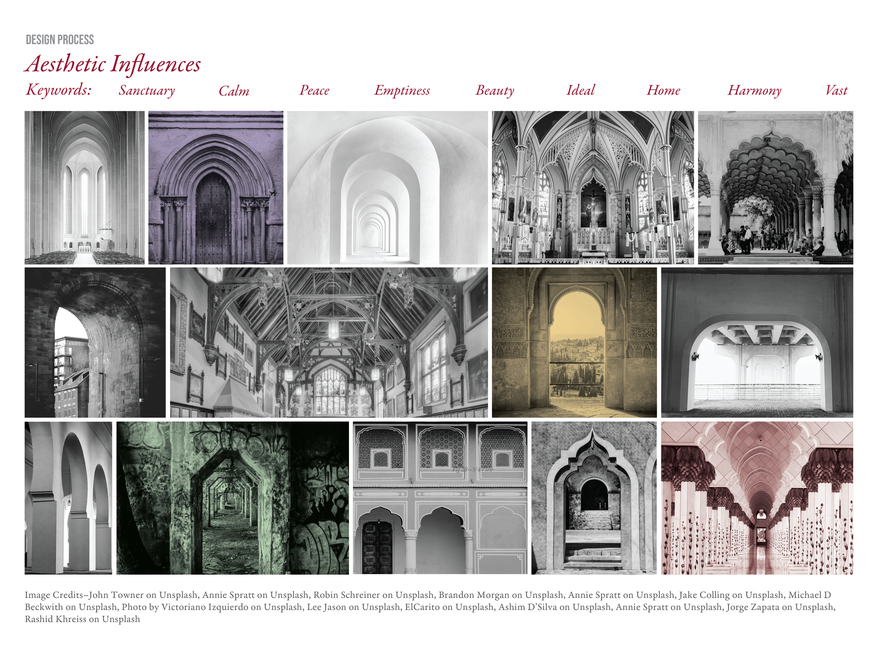 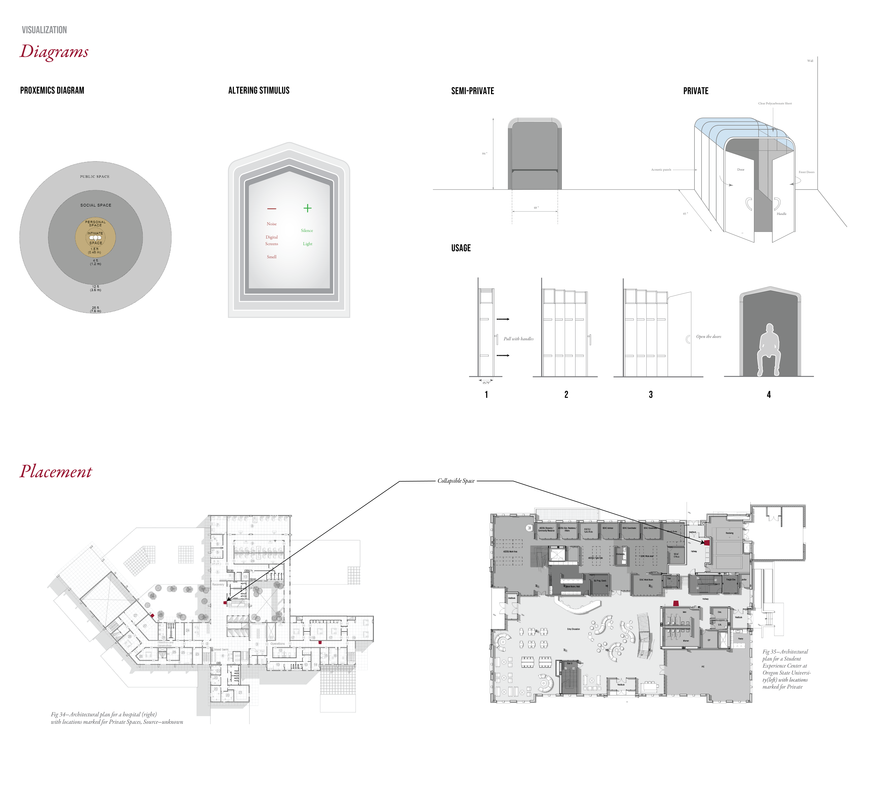 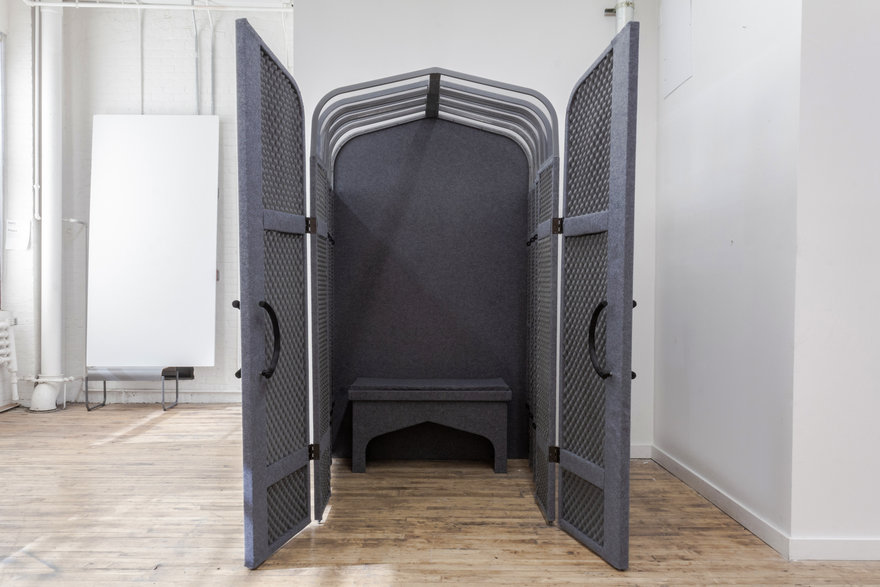 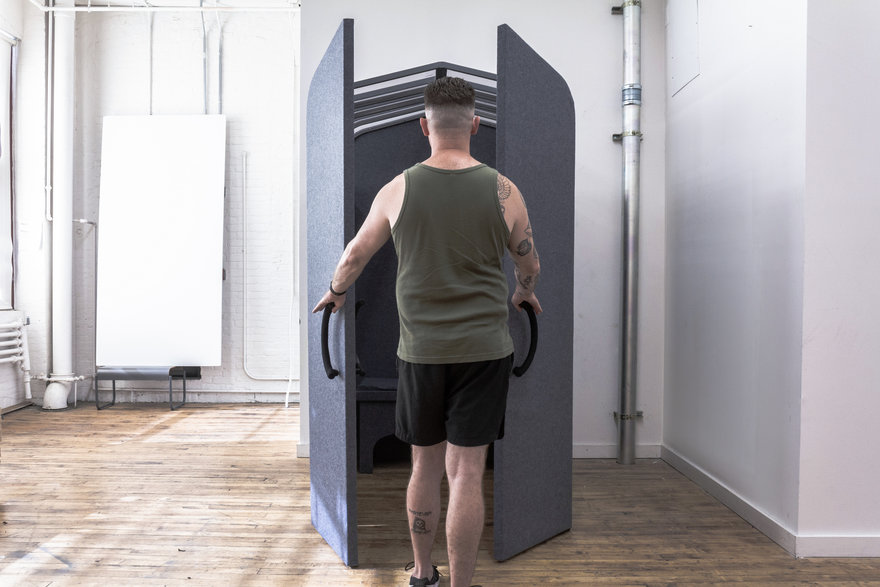 Model-Jon Notine Person opening the doors to the space 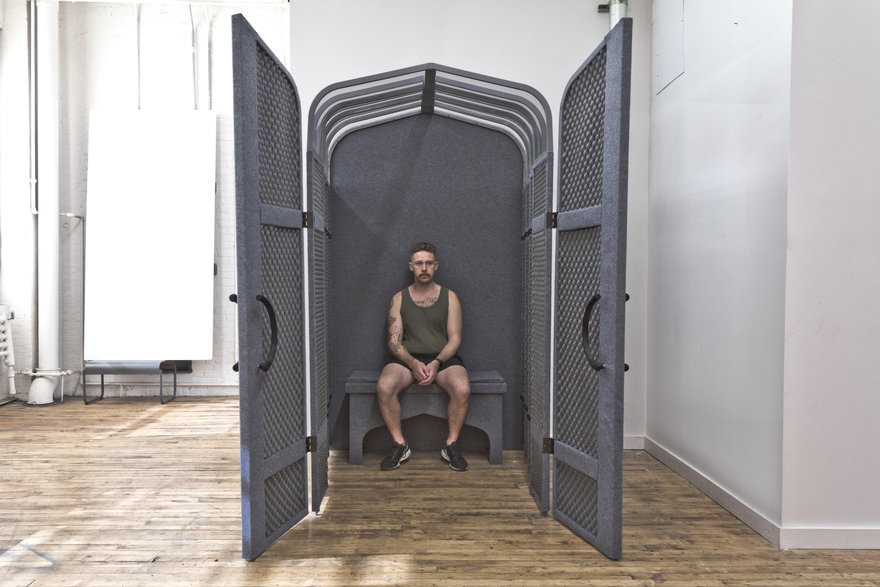 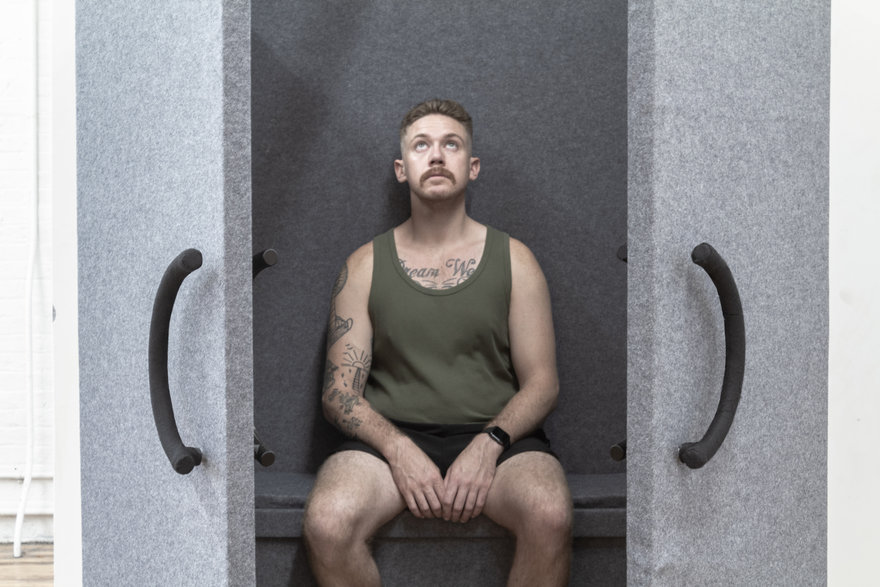 According to psychotraumatologists, the part of the human brain that ensures the organism's survival gets reactivated at the slightest hint of danger, activating brain circuits and secreting massive amounts of stress hormones. This begins a chain reaction of disturbing emotions, intense physical sensations, and impulsive and aggressive actions. These incomprehensible post-traumatic reactions can feel overwhelming. Survivors of trauma begin to fear that they are broken beyond repair. The sequence of cause-and-effect does not limit itself to one person, but extends and affects their loved ones. Research from neuroscience, developmental psychopathology and interpersonal neurobiology, has revealed that trauma produces actual physiological changes in the brain. These include-a recalibration of the brain's alarm system, an increase in stress hormone activity, and alteration in the system that filters relevant information. Observing the actual changes in the brain can provide a scientific understanding that explains the behavior of traumatized individuals. (Van Der Kolk, Bessel, "Facing Trauma", The Body Keeps the Score, 2014)

PTSD poses several challenges. 1. Multiple causes-PTSD in many cases can be a result of complex interactions between experiences from different stages in a person's life.
2. Panic-Memories from traumatic experiences can trigger a sequential execution of thoughts, feelings and experiences as part of a person's response.
3. The dilemma of a variety of responses to therapyResearchers, clinicians and even patients agree that there is no standard therapy that is effective in reducing the effects of trauma in every patient. The response to any form of therapy is variable and is different from person to person.
4. Effects on familyWhen children suffer from the effects of trauma exposure, the reactions of parents may negatively impact the children, more than the direct exposure.
5. The problem of finding the right therapistSurvivors of trauma often express their difficulty in finding a therapist that is able to help them.

AREA OF INTERVENTION Approaching PTSD can be overwhelming due to the inconsistencies in evidence from scientific studies or anecdotal accounts. It may, therefore, be useful to identify, understand and work with one of PTSD's many layers, instead of addressing it as a whole. Reboot addresses the psychological state of panic, by exploring the effect of the absence auditory stimulus during a panic attack. Auditory stimulus is any stimulus capable of eliciting auditory sensation. This usually refers to a distinct airborne sounds, but can also include vibrations produced by conduction or by internally generated events. The effect of the absence of sounds on the human mind, is the main idea for Reboot's experimental hypothesis.

ENVIRONMENTAL NOISE
The workings within human physiology explain how vibrations from sound can affect the human body. Neurophysiological research suggests that noises first activate the amygdalae, clusters of neurons located in the temporal lobes of the brain, associated with memory formation and emotion. The activation triggers an immediate release of stress hormones like cortisol. Consistently loud environments can often lead to chronically elevated levels of stress hormones in people.

Silence first began to appear in scientific research as a control or baseline, against which scientists compare the effects of noise or music. Luciano Bernardi published the physiological effects of music in a study in 2006. It was found that the impacts of music could be seen directly in the bloodstream, through changes in blood pressure, carbon dioxide, and circulation in the brain. Bernardi, observed a far more important phenomenon between musical tracks-randomly inserted stretches of silence proved far more relaxing than either "relaxing" music or a longer silence played before the beginning of the experiment.

The blank pauses, eventually, became the most interesting aspect of study. Silence gave test subjects a release from careful attention, and seemed to be heightened by contrasts.

STUDIES ON MICE Neurological research has corroborated Bernardi's key finding—that silence is heightened by contrasts. In 2010, Michael Wehr, Associate Professor of Psychology at the University of Oregon, observed the brains of mice during short bursts of sound. Wehr's research extended previous findings by showing that the auditory cortex has a separate network of neurons that fire when silence begins.

It can be seen that even though we define silences as a lack of input, our brains are structured to recognize them, whenever they represent a sharp break from sounds. And, when silence continues, the auditory cortex settles into a state of relative inactivity.

Imke Kirste, a regenerative biologist from Duke University, has examined this question. Her experiment exposed four groups of mice to various auditory stimuli: music, baby mouse calls, white noise, and silence. She discovered that, even though all the test-sounds had short-term neurological effects, none of them had a lasting impact. On the other hand, Kirste found that two hours of silence per day prompted cell development in the hippocampus, the brain region related to the formation of memory, involving the senses. It could be possible that the total absence of sound—an artificial condition—could prompt a higher level of sensitivity or alertness in the mice. This engineered silence can result in neurogenesis, a possibly adaptive response. Kirste wondered if these preliminary findings could have unexpected applications for conditions like dementia and depression, that have been associated with decreasing rates of neurogenesis in the hippocampus. If a link between silence and neurogenesis could be established in humans, she says, perhaps neurologists could find a therapeutic use for silence.(Gross Daniel A., "This is your braim on silence", Nautilus, Issue 38, 2016)

PRECEDENTS FOR DESIGN Objects and environments can provide a range of artifacts that can be used to remove sensory stimulus. These artifacts include anechoic chambers that represent the quietest rooms on planet earth and floatation tanks that provide private weightless experiences. Experiments in wearable technology have created devices like the Helmfon and Panasonic Wear Space- mobile private environments for the human head. These can limit the amount of information being absorbed and processed by the brain. In addition to this, technology such as noise cancellation provides the ability to filter the information reaching the ears.

Having access to a private space that is devoid of sensory stimulus, may help an individual regain control over his/her emotions during a panic attack, by creating a safe barrier between the user and his/her external environment. It would provide a break from sensory input. The purpose of this space is to provide agency to a survivor of trauma outside his/her meetings with a therapist. It is expected to support mainstream therapy in the form of a plug-in.

1. MATERIAL THAT ALTERS SENSORY INFORMATION
In order to dampen sound from the surrounding environment, flexible polyurethane foam was used to fill the spaces inside the telescoping hollow-core doors. Felt was used to wrap and cover the hollow core doors as it provides additional sound insulation. The color of both the foam and the felt is 50% gray. This decision was intentional, to keep the look and feeling of the structure benign and non-evokative.

The WELL and LEED building standards stress the necessity of natural light for psychological health and well-being. Keeping this in mind, the design uses clear polycarbonate panels to create the canopy of this space. Reflected natural light enters the private space, from within the building, inside which this structure is installed. (Jach, Joelle, "Building on Workplace Well-being", WorkDesign Magazine) A sample tile was created with two polycarbonate layers and an air gap between them, in an effort to achieve acoustic insulation in the top panels as well.

2. COLLAPSIBILITY The private space is designed so that it can adapt to the available space in existing buildings. These buildings may lack the necessary floor area to place this object. To prevent any interference in or the disruption of movement inside the building, it became important to innovate the structure so that it can be collapsed and deployed when required.

These spaces may also be set up in private apartments with limited floor space. Scaled volumes were created to see how these models can be disassembled or folded. The model with telescoping arches was selected to be constructed in the scale of 1=1.

3. SPATIAL COMFORT Large cardboard volumes were used to create basic mock-ups to understand how comfortable/uncomfortable an enclosed space can be. Edward T. Hall's proxemics diagram provided an indirect guideline for determining the size of the private space. If the structure enclosed an area defined by a 4-5 feet diameter, then it encloses a personal space inside it.