3D Scanning is an emerging field in technology. From scanning ants to scanning cities, the possibilities seem endless. However, body parts are still very hard to scan due to their agile nature. A prior graduate designed a 3D printed brace, and during her process she experienced the frustrating process of trying to scan a hand properly.

During my graduation, I developed the first dedicated and low-cost 3D Hand Scanner. Using Raspberry Pis, laser pointers and 32 cameras, the scanner is able to create a precise surface model of the hand.

This model opens a new world of possibilities: think of 3D printed braces, personalized medical instruments and a long-awaited tool for everyone who designs products that interact with the human hand. 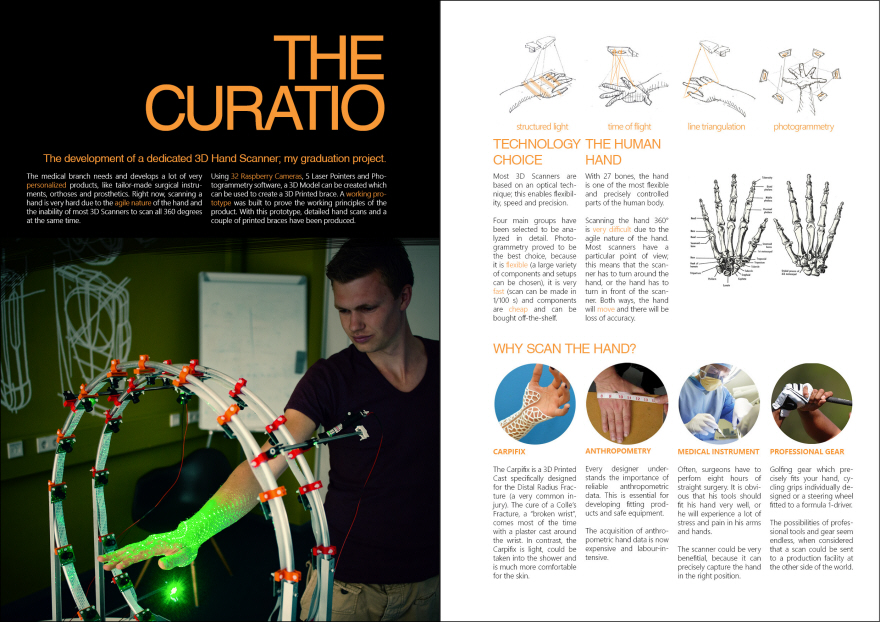 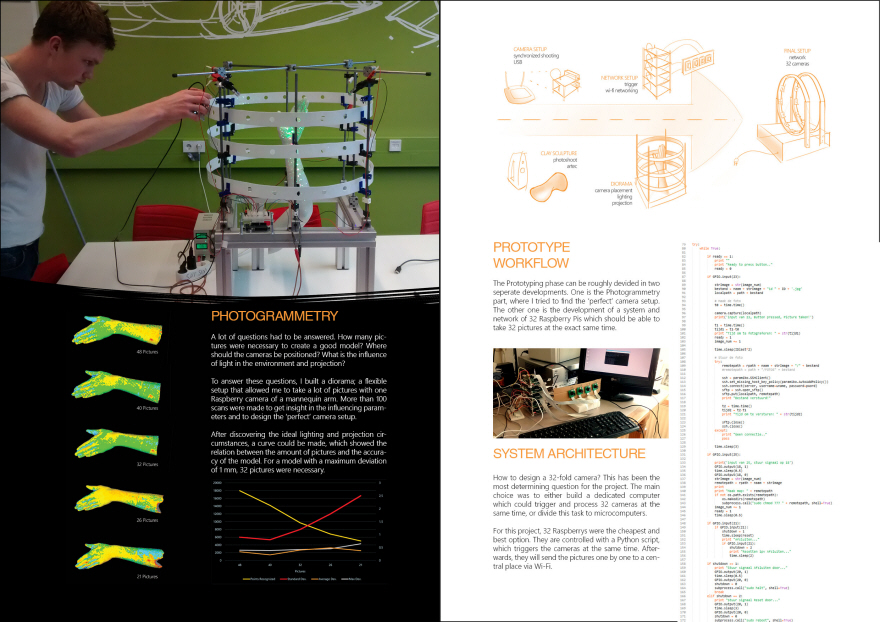 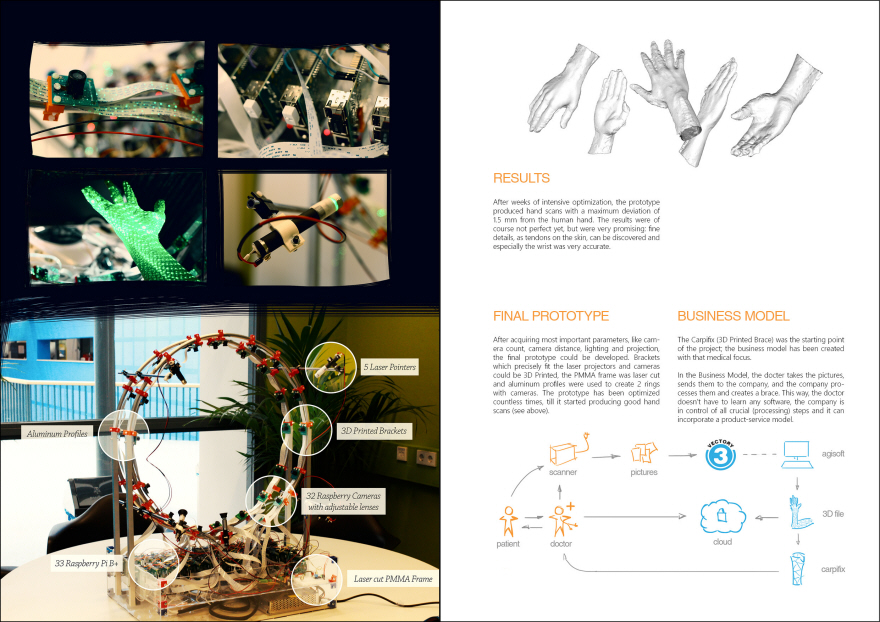 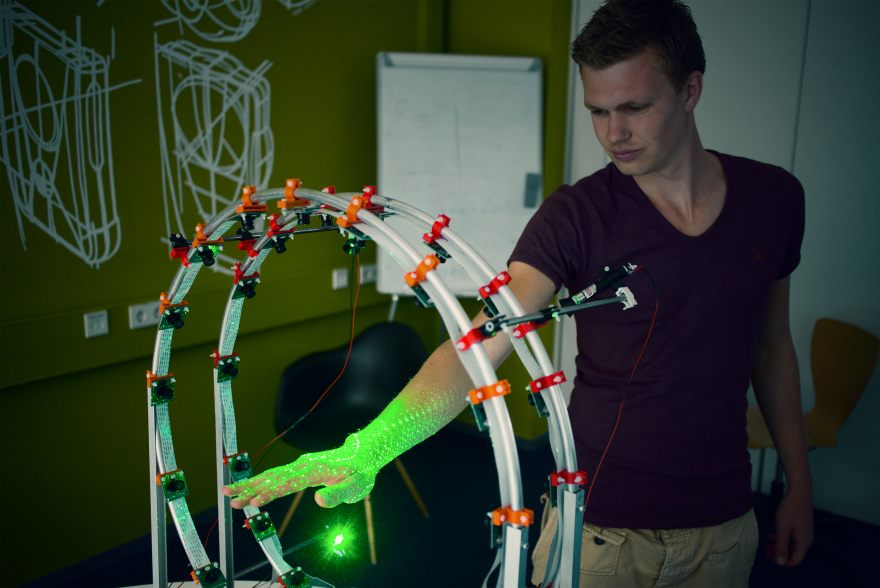 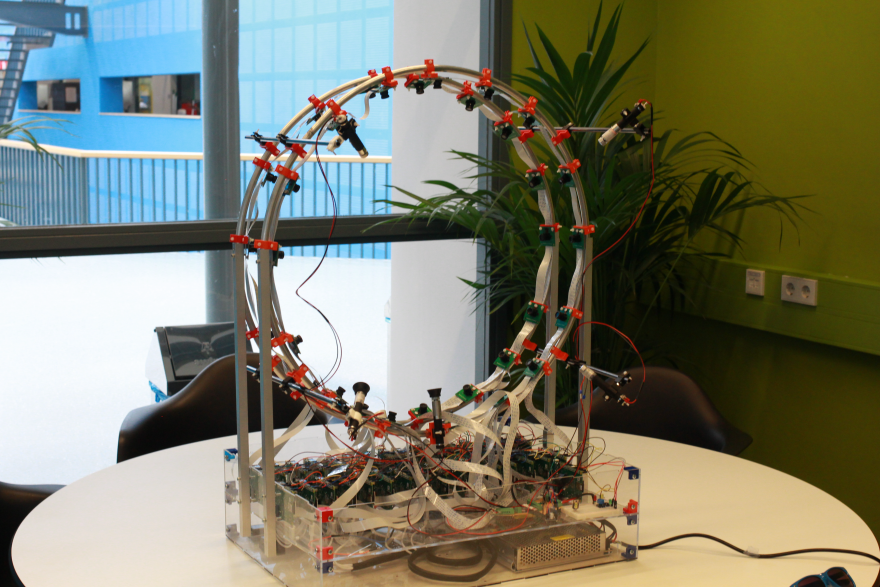 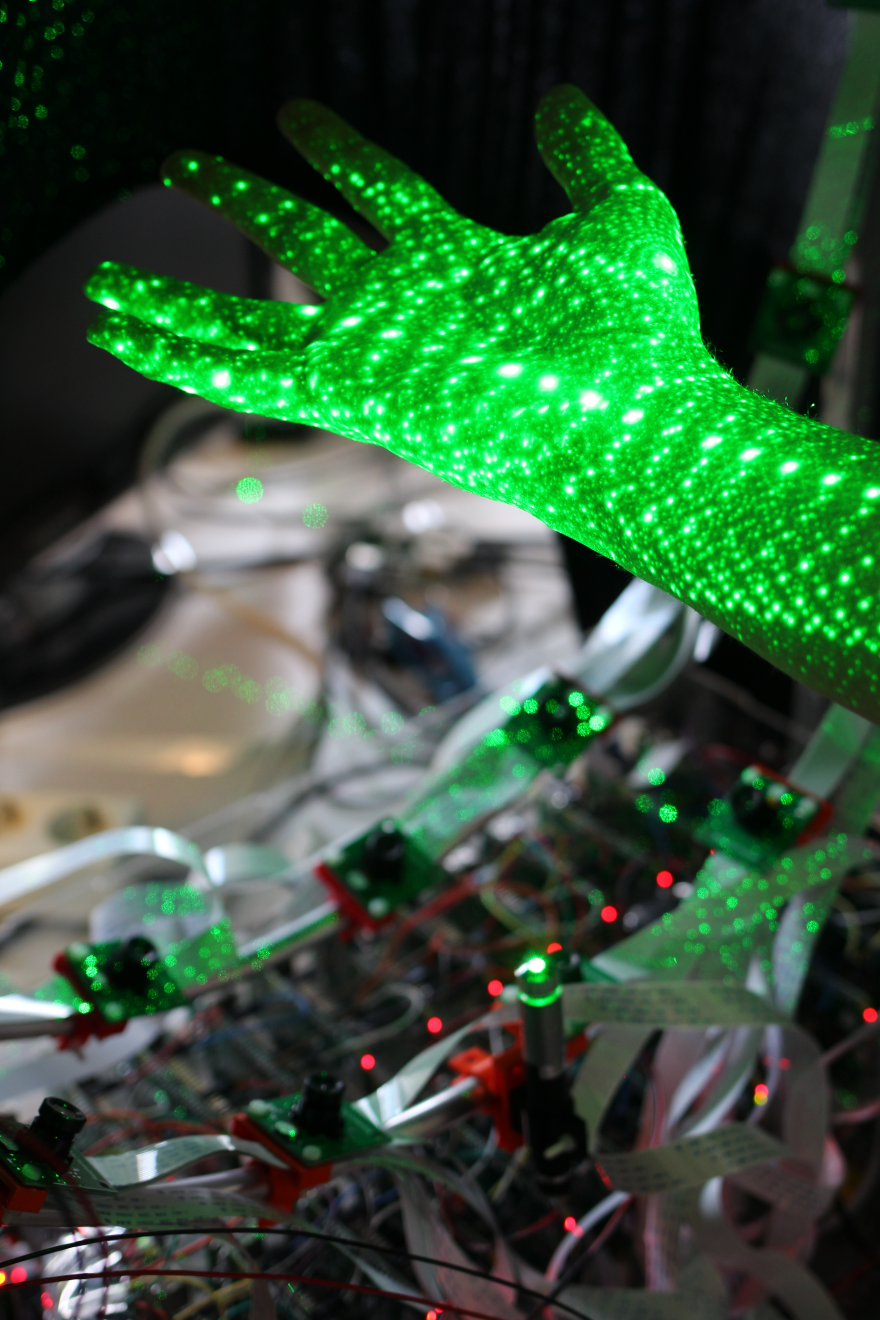 Most 3D Scanners are based on an optical technique, which enables flexibility, speed and precision.

After a thorough analysis phase, photogrammetry proved to be the best choice, because it is flexible (a large variety of components and setups can be chosen),fast (scan can be made in 1/100 s) and components are cheapso they can be bought off the shelf.

Consisting of 27 bones, the hand is one of the most flexible and precisely controlled parts of the human body.

Scanning the hand 360° is very difficult due to the agile nature of the hand. Most scanners have a particular point of view; this means that the scanner has to turn around the hand, or the hand has to turn in front of the scanner. Both ways, the hand will move which results in a loss or accuracy.

A lot of questions had to be answered. How many pictures were necessary to create a good model? Where should the cameras be positioned? What is the influence of light in the environment and projection?

To answer these questions, I built a diorama; a flexible setup that allowed me to take a lot of pictures with one Raspberry camera of a mannequin arm. Over 100 scans were made to get insight in the influencing parameters and to design the 'perfect' camera setup.

After discovering the ideal lighting and projection circumstances, a curve could be made which showed the relation between the amount of pictures and the accuracy of the model. For a model with a maximum deviation of 1 mm, 32 pictures were necessary.

The Prototyping phase can be roughly divided in two separate developments. One is the photogrammetry part, where I tried to find the perfect camera setup. The other one is the development of a system and network of 32 Raspberry Pis which should be able to take 32 pictures at the exact same time.

How do you design a 32-fold camera? This has been the most determining question for the project. The main choice was to either build a dedicated computer that could trigger and process 32 cameras at the same time, or divide this task to microcomputers.

For this project, 32 Raspberrys were the cheapest and best option. They are controlled with a Python script, which triggers the cameras at the same time. Afterwards, they will send the pictures one by one to a central hub via Wi-Fi.

After acquiring most the important parameters like camera count, camera distance, lighting and projection, the final prototype could be developed. Brackets which precisely fit the laser projectors and cameras could be 3D Printed, the PMMA frame was laser cut and aluminum profiles were used to create 2 rings with cameras. The prototype has been optimized countless times, till it started producing good hand scans.

The Carpifix (3D Printed Brace) was the starting point of the project; the business model has been created with amedical focus.

In our storyboard, the doctor takes the pictures, sends them to the 3D company, and the company processes them and creates a brace. This way, the doctor doesn't have to learn any software, the company is in control of all crucial processing steps and it can incorporate a product-service model.