The Q system is a wearable captioning device that displays text and graphed emotions in addition to allowing people with hearing loss to feel the sounds that they are missing. The system is comprised of a band that is worn on the user's hand, an array microphone clip that is worn on the user's clothing, a charging unit, and an app that can be used with smart phones or tablets.

When a person is speaking to someone who is wearing Q, their voice is captured by the array microphone, transported to the band via Bluetooth, and translated into text using voice recognition software. The text appears on an OLED screen embedded in the palm of the band. If the person wearing Q chooses, they can activate 4 features using finger commands: (1) Transcript Recording, which allows the user to begin recording a transcript of a conversation, (2) Emoticaptioning, which displays the speaker’s volume, frequency, and duration of sound in one fluid graph, (3) Touch Speech, which uses combinations of four pressure points to represent sounds that a person with hearing loss might be missing, and (4) Bookmarking, which allows the user to mark a moment in the conversation for future reference. Transcripts, bookmarks, and a calendar can be accessed through the accompanying app. 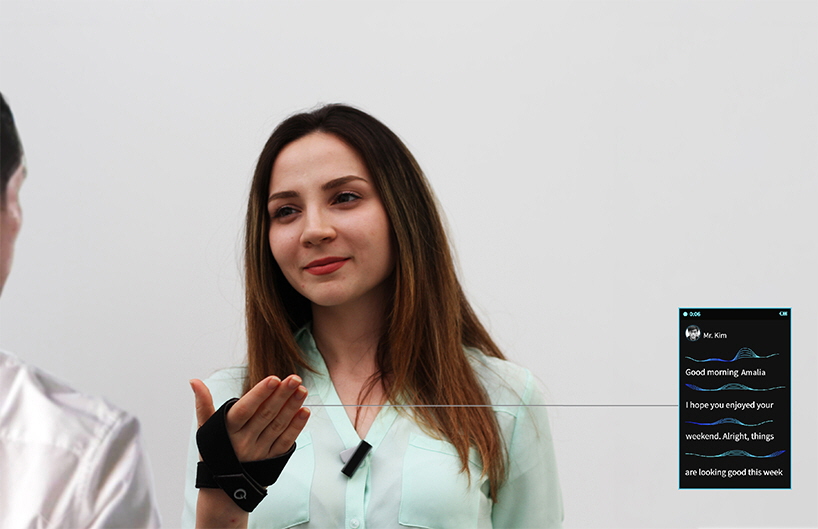 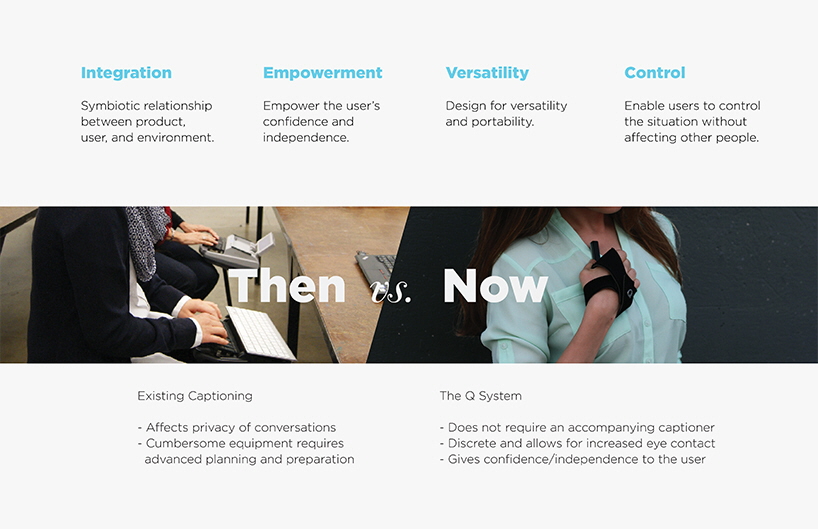 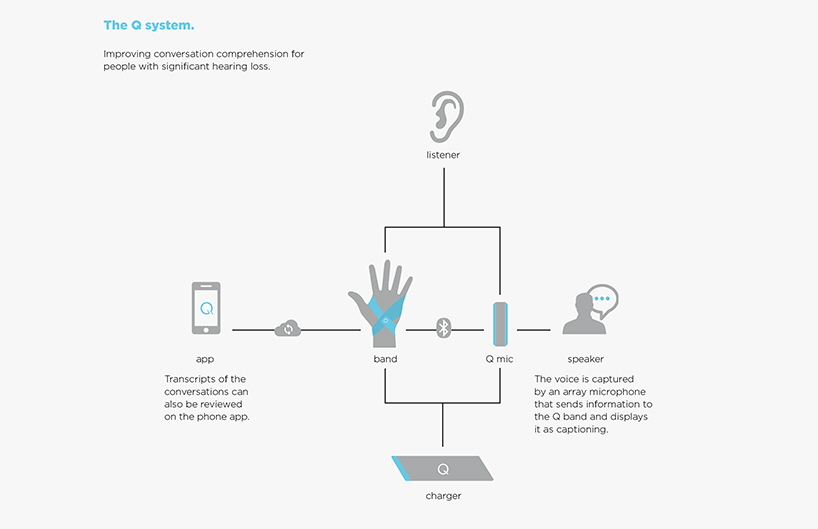 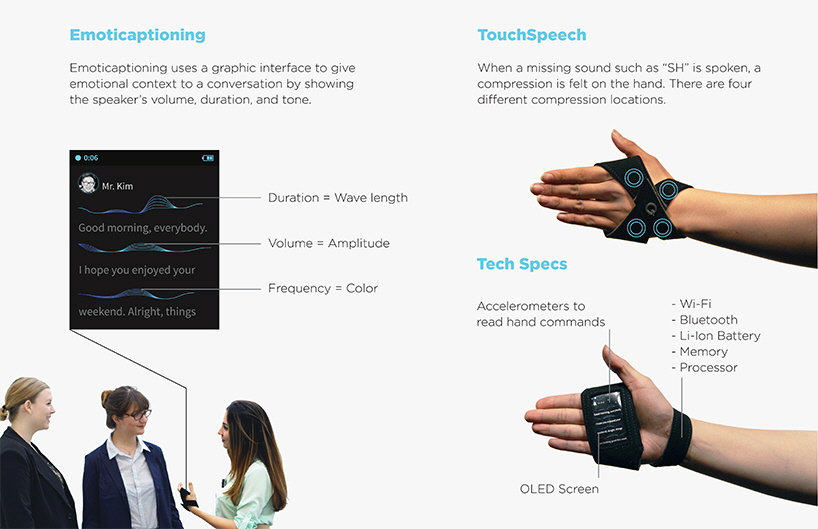 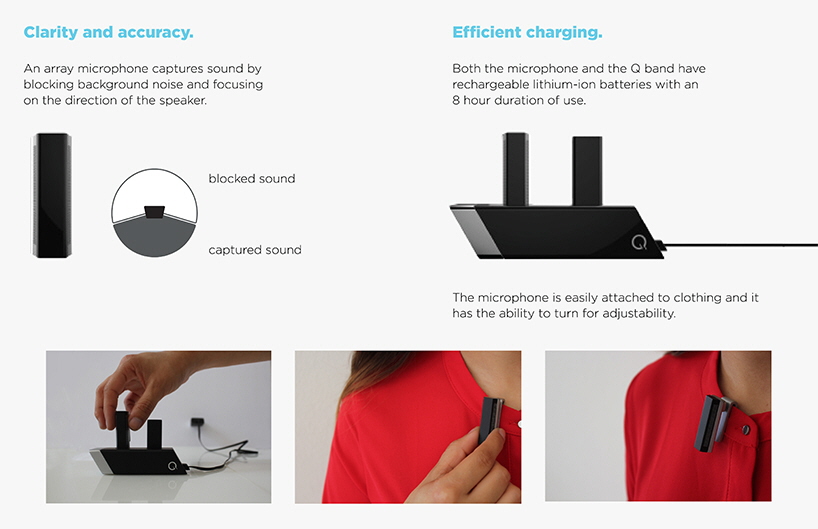 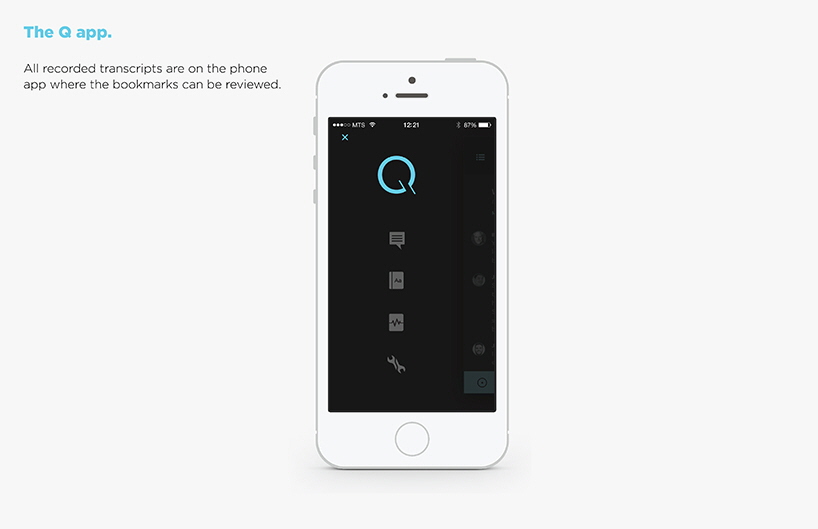 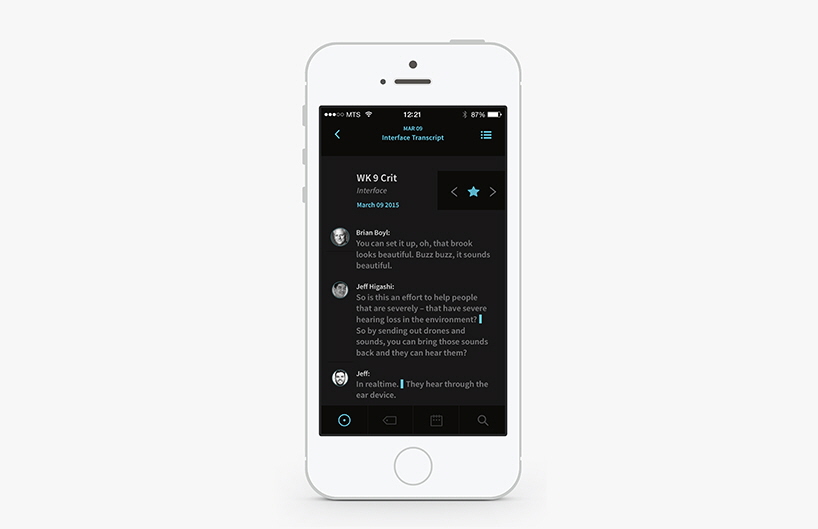 When people look at a captioning device, they are missing the speaker’s body language and facial expressions that account for half of the meaning of what is being said.

Interpreters and captioning equipment are expensive, cumbersome, and take up a lot of space. People who use Interpreters need to schedule them 24 hours in advance, making spontaneity nearly impossible.

Q is a device that captions with emotion, supplements missing sounds with compression combinations, and allows you to bookmark captioning in real-time.

Emoticaptioning graphs volume, frequency, and duration of sound—three qualities of speech that help give context and meaning to a transcript.

Q uses Touch Speech compression combinations to only represent sounds that a user is missing, based on a hearing test, rather than translating every phonetic sound into a tactile sensation.

Because Touch speech allows people with hearing loss to feel sounds, rather than read them, users can maintain eye contact.

Unlike traditional captioning, Q allows users to bookmark parts of the transcript in real-time, e.g. dates, times, or important moments for future reference.

Interpreters and their equipment draw a lot of attention, which can be intimidating and can sometimes prevent social interactions. Q’s size and wearability allow its user to discreetly read captioning by glancing down at their hand, or by not looking at it at all and simply feeling what is being said through Touch Speech.