Being told that you have a lifelong, incurable, eyesight problem is a terrifying prospect; one that is very difficult to come to terms with. For the visually impaired, retaining independence in day-to-day life is important, however, navigation can be a long-winded, potentially unsafe process, especially in new environments or at night. Simple tasks like traveling to work can become arduous and time-consuming and more often than not, need planning beforehand.

Maptic is a system of wearable sensory devices, consisting of a visual sensor and vibrating feedback units. These customizable modules can be worn without attracting the stigma that current assistive products harbor, while still accurately detecting objects in the visual field and transmitting them into intuitive vibrations on the body. Using the sense of touch frees up hearing for detecting immediate dangers, which is the dominant sense when visually impaired.

Along with immediate hazard perception, an included high contrast, bold app allows Maptic to pair with smartphones. Utilizing the phone's GPS, the app can navigate the user to chosen destinations via vibrations to the left and right sides of the body when the user needs to turn.

Either disguised as jewellery or clips or worn as statement pieces, Maptic is entirely adaptable to the individual and their style preferences. Swapping out the cable for a pin or clip allows the units to be concealed around the body, and can be worn on belts, in pockets, or clipped onto shirts. 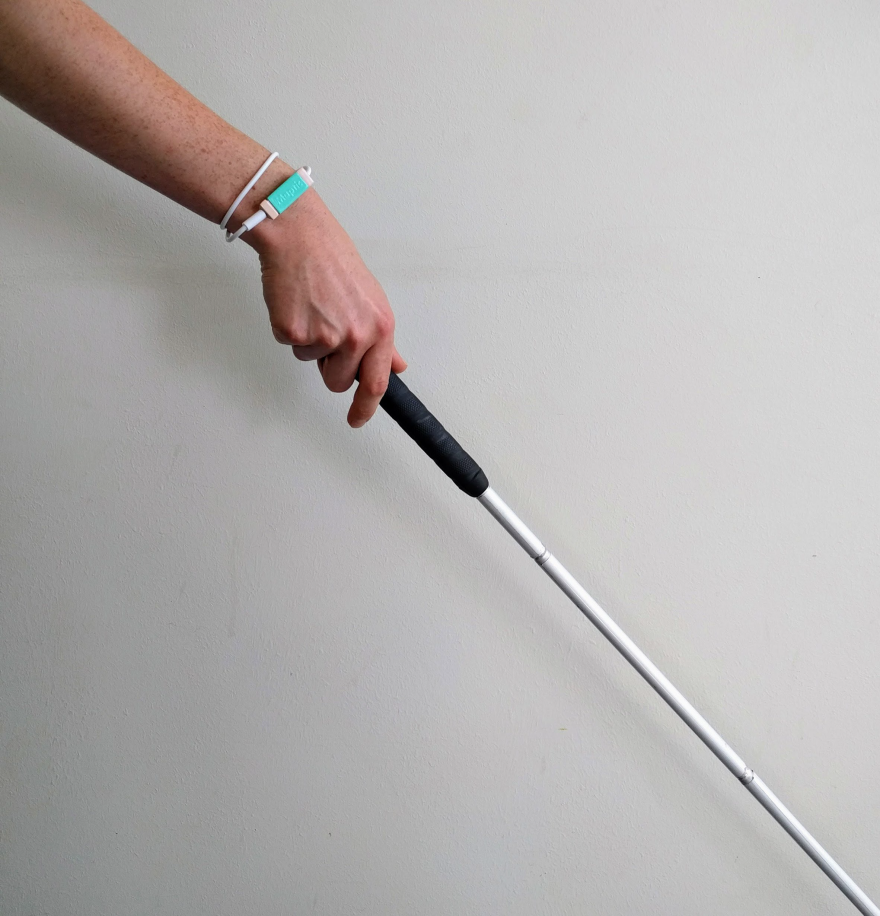 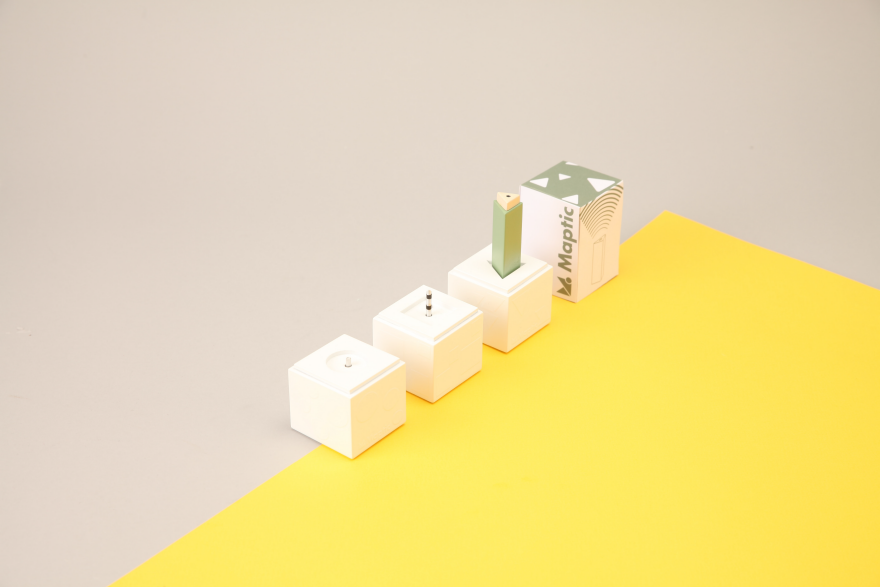 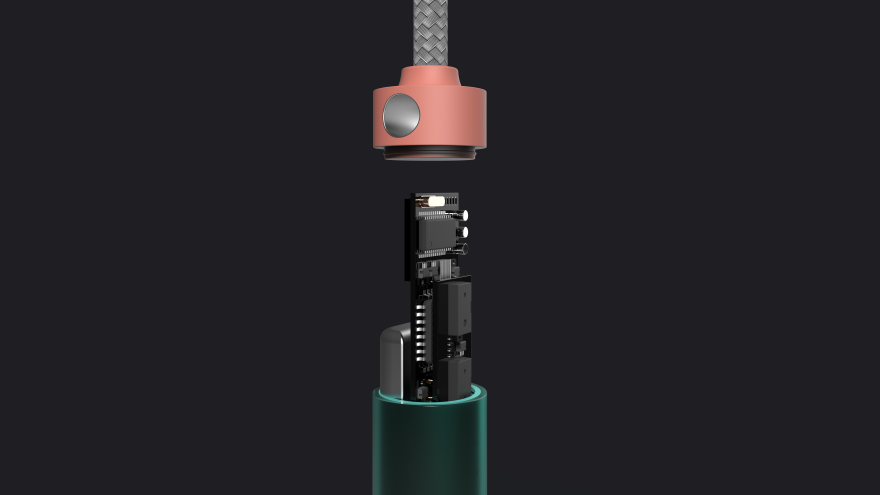 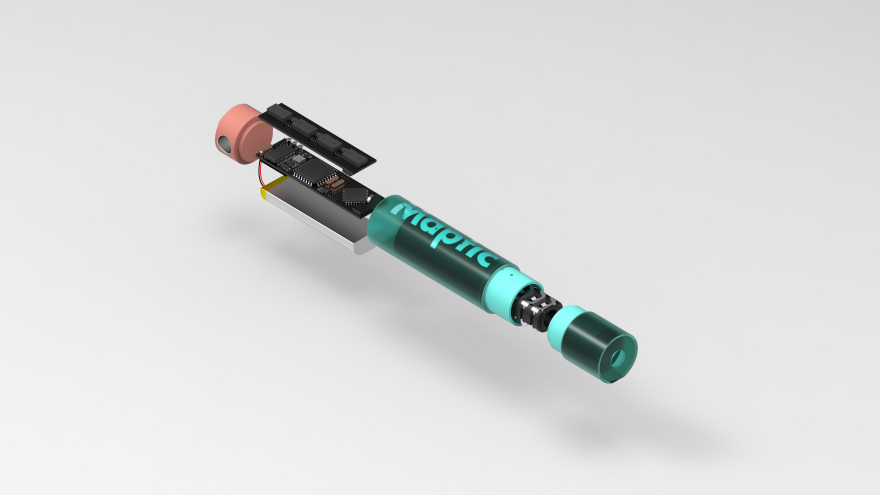 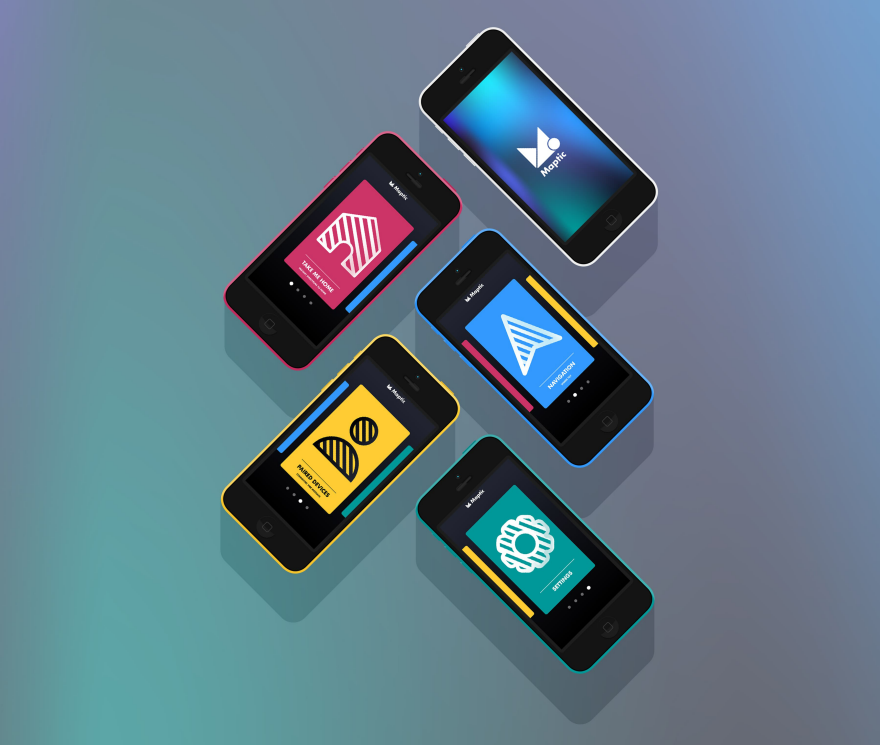 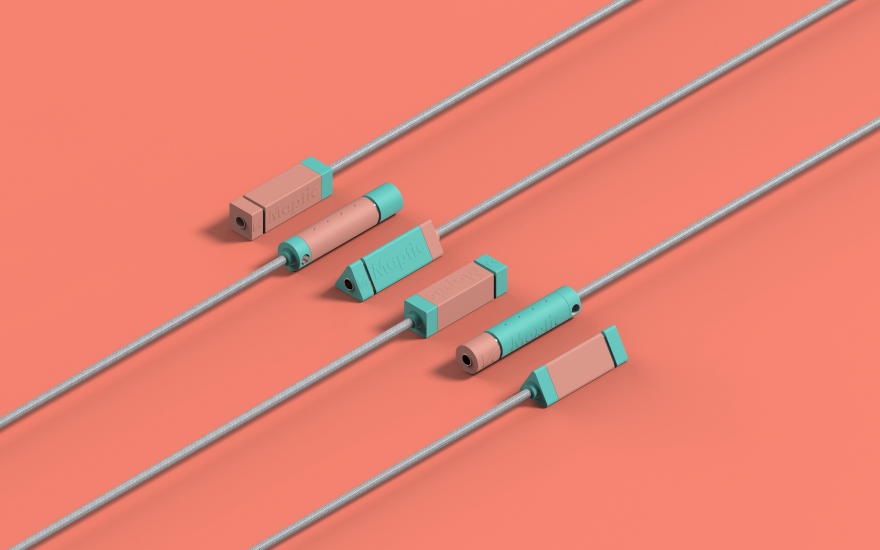 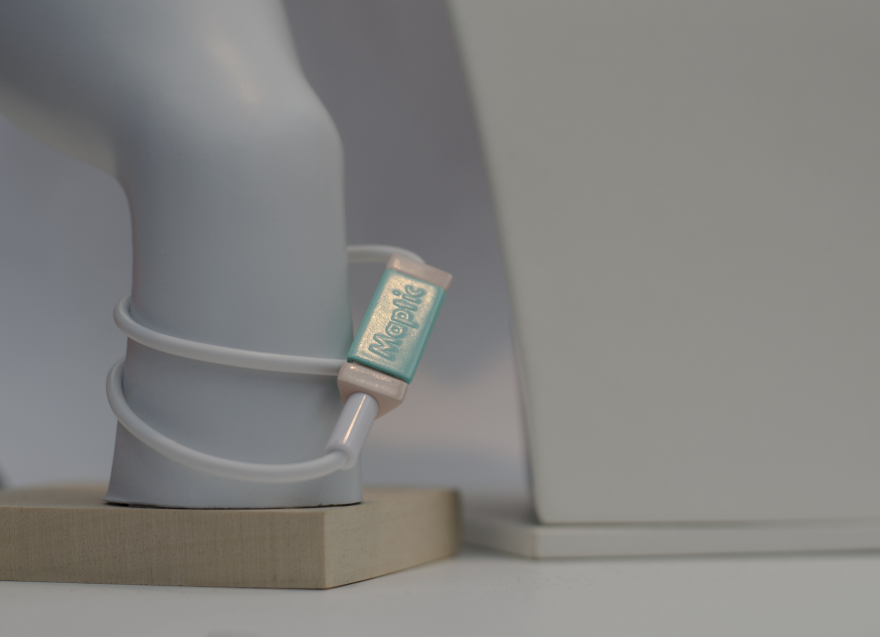 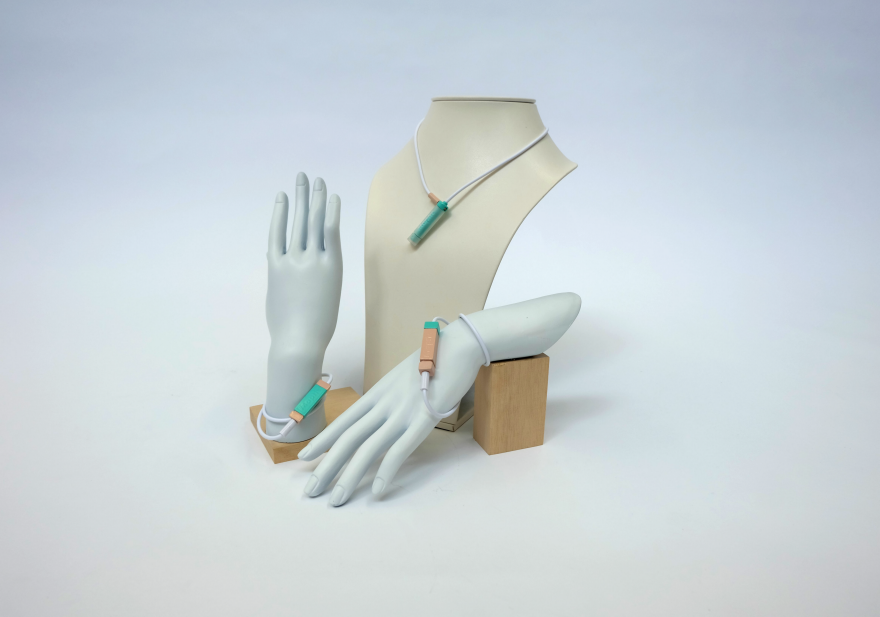 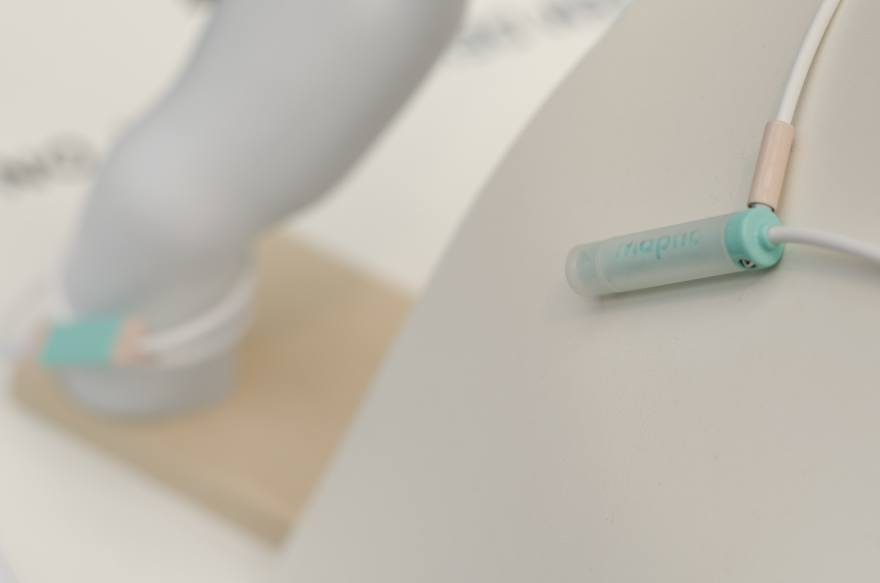 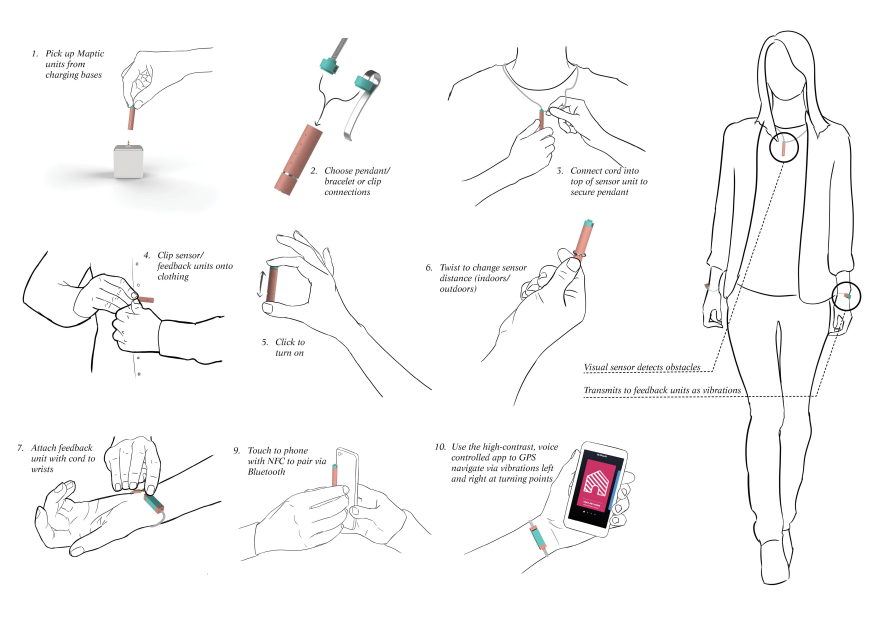 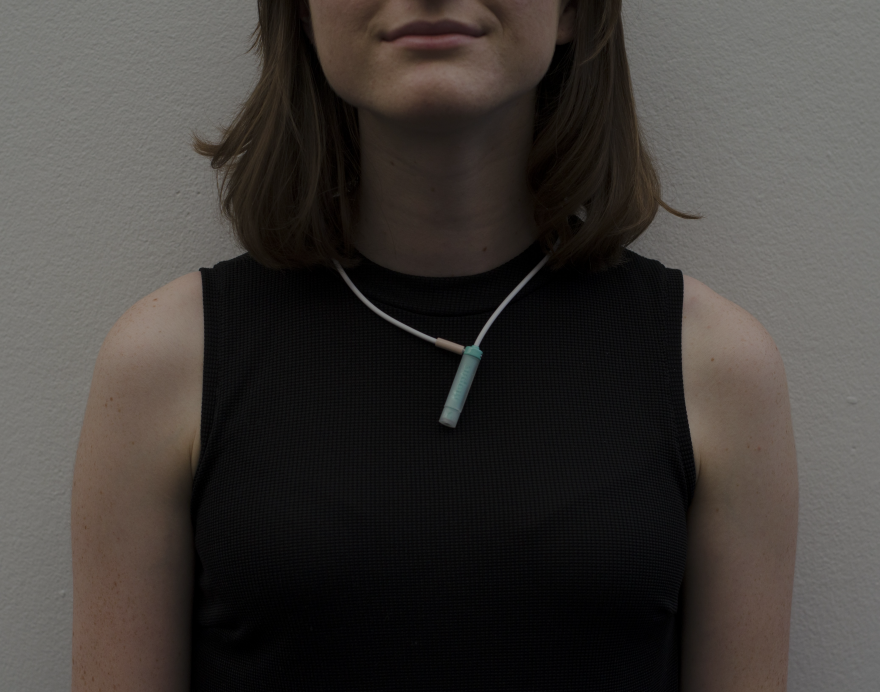 Quality of life visual impairment affects approximately 1 in 28 people over 40, with 2 million people in the UK living with sight loss.

Hearing becomes the dominant sense for detecting immediate dangers and unfortunately, most current devices utilize purely audio based feedback for operation.While visually impaired people may not feel as handicapped and believe it doesn't hinder them in most tasks, the general public often has incorrect assumptions about the visually impaired. There is often a feeling of pity that comes with blindness, one that is unwelcome to partially sighted people.

Current assistive products tend to look overly medical, with emphasis on function rather than aesthetics or ergonomics. Touchpoints cater to any remaining eyesight and tend to be high contrast, vibrant colors—but often garish and even ugly. As the number of assistive products and technology breakthroughs increase, as does product discontinuance. 29.3% of all visual impairment devices used are abandoned.

While interviewing users of visually impaired products, they expressed a dislike that most products are unattractive, both via tactile feeling and remaining sight. Many complain of undesirability and feeling self-conscious when using the products, especially if they looked medical. A good example of an assistive product done right is the Bradley watch by Eone. It has become so desirable in fact, that what was initially designed for partially sighted people has become fully taken up by people with full sight.

With stigma as a focal point, Maptic's initial design stage incorporated designing concepts that would be invisible or concealed to the public. Along with aesthetics, key points involved intuitiveness, ease of use and adequate feedback, and were investigated through journey mapping and user-testing.

Current assistive devices and sensing products (think parking sensors) detect via ultrasonic sensors—sound is pinged out, reflected off an object and returns to the sensor as a signal. These components are cheap, however, they tend to be bulky and are often unreliable.

Initial prototyping and testing commenced with ultrasonic sensors, but during the project, a new form of sensor was released: the long-range, time-of-flight sensor. This sensor is a fraction of the size of an ultrasonic sensor and is much more reliable. The smaller sensor allowed for a drastically smaller design form factor, allowing the design to look even less cumbersome and in the long run, less like an assistive product.

As the design incorporates a sensor and feedback devices, ensuring that the user gets high quality, intuitive haptics is important. Prototype testing involved designs such as inflation bands and vibrating insoles, but it was discovered that ticking vibrations (similar to sonar) provided the best response for detecting distances, which were prototyped via mini vibration motors and specialized haptic microchips.

Through iteratively prototyping and designing hand in hand, the project ended up as a series of wearable units, consisting of a central sensor unit worn on the chest and feedback units worn on the left and right sides of the body. All interactions with the units have been taken with touch into consideration. At any given point, by running a finger down the device, the user can detect the state of the system, whether it's on or off, indoors or outdoors, or which orientation the sensor is. Different profiles were given to the sensor (circle), left (square) and right (triangle) units, for the user to immediately tell what they're touching.

The units are versatile, and by unclipping the top section, allows the user to choose an attachment that suits their needs and style. Charged with a simple 3.3V headphone jack on a custom dock, the units can plug into themselves, creating bracelet or necklace appearances.

'Maptic' (a play on map and haptic) was chosen as the brand name, one that doesn't have immediate medical connotations and would be more closely linked to a lifestyle brand.

A major part of the project is turn by turn navigation, where the user can be directed to a destination via vibrations, not spoken word. Instead of using an in-built GPS module into the circuitry, increasing the size of the units while decreasing battery life, it was chosen to link the Maptic units to a smartphone, using the current GPS capabilities of the phone and Google Maps API to provide the data for navigation.

While the function is already part of the phone, the interaction is limited to voice input and output. To combat this, a custom app was built with high-contrast colors and shapes, allowing the user to simply tap to go home, or a couple of swipes to a chosen destination. The app also allows the user to check on the status of the units, and if they are paired correctly. These high contrast colors and geometric shapes ultimately dictated the design language of the branding of the project.

While in its current state, Maptic is purely for visually impaired people. However, the feedback towards this project has been positive, with fully sighted people having a keen interest in the project. Incorporating features of the project further, such as the turn-by-turn, GPS navigation, could allow for the next iteration of Maptic to be more inclusive, and hopefully even less stigmatic.