The Compound Camera is a twenty-foot inflatable installation composed of 109 pinhole cameras, each of which projects a slightly different view of the surrounding environment onto its interior surface. The structure's flexible fabric invites visitors to push on and distort the projected images, allowing them to play with the fundamental properties of light, optics, and vision in a tangible way. In our increasingly digital world, the Compound Camera offers an analogue perspective; it reminds us that relatively simple construction methods and old technologies can continue to profoundly impact how we perceive our surroundings. 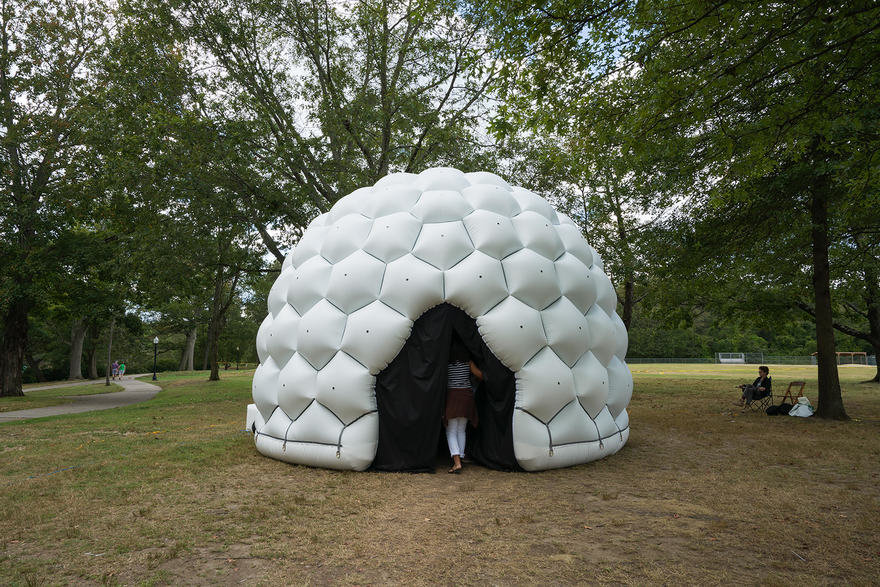 Cassidy Batiz Opaque Exterior From the outside, the Compound Camera looks like an opaque, dark space. 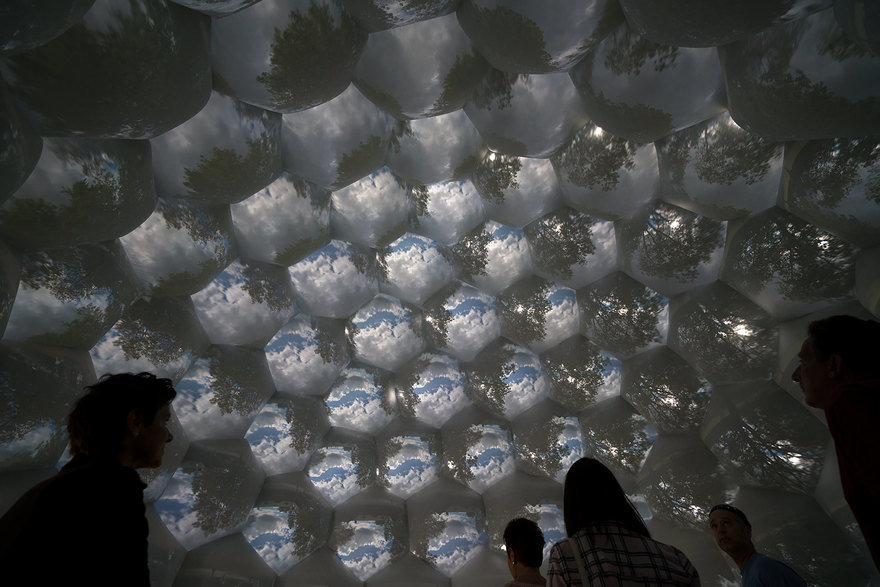 Cassidy Batiz Fully Transparent Interior Once inside, the interior wall disappears into a patchwork of the exterior world. 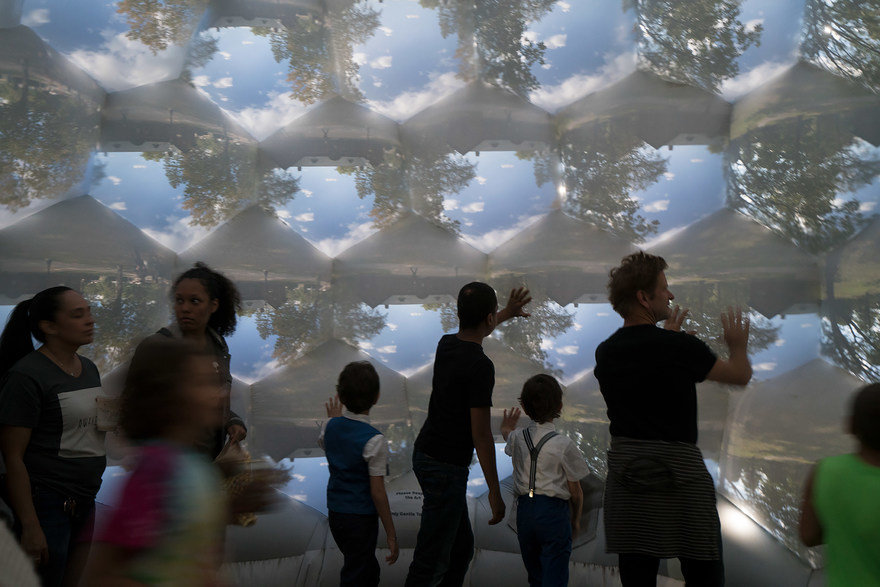 Cassidy Batiz Soft to the Touch The piece is inviting to touch since it is a soft and squishy inflatable. 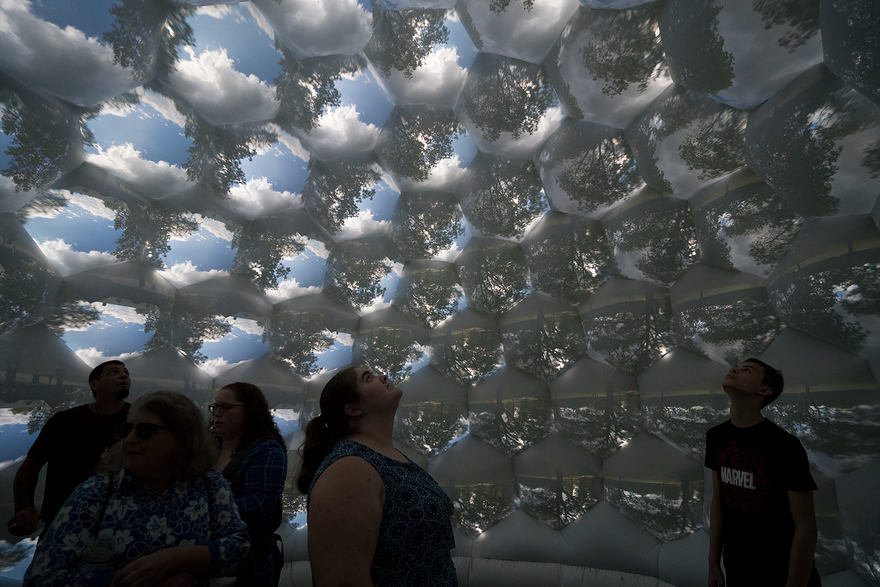 Cassidy Batiz All Encompassing The piece is an immersive experience, inviting visitors to look all around. 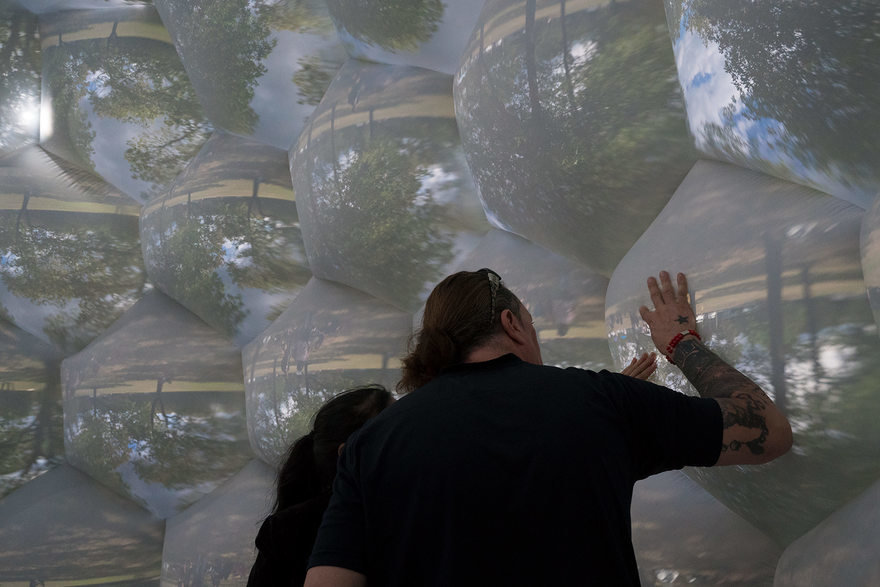 Cassidy Batiz Fully Analog Most people find the analog nature of the Compound Camera unbelievable. They find that touching the surfaces helps them understand that there is no digital equipment embedded within it. 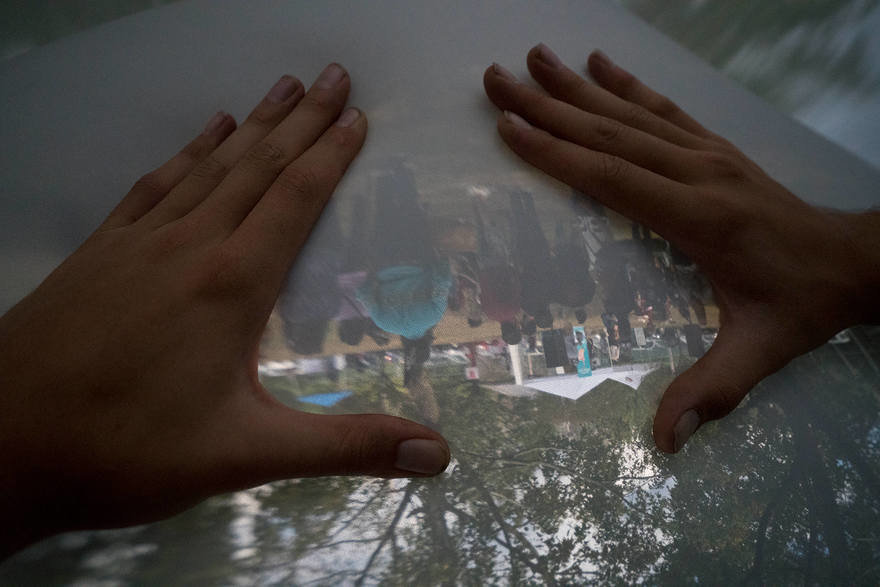 Cassidy Batiz Interactive Visitors can focus on different elements of the "scene" by pushing into the inflated cells. 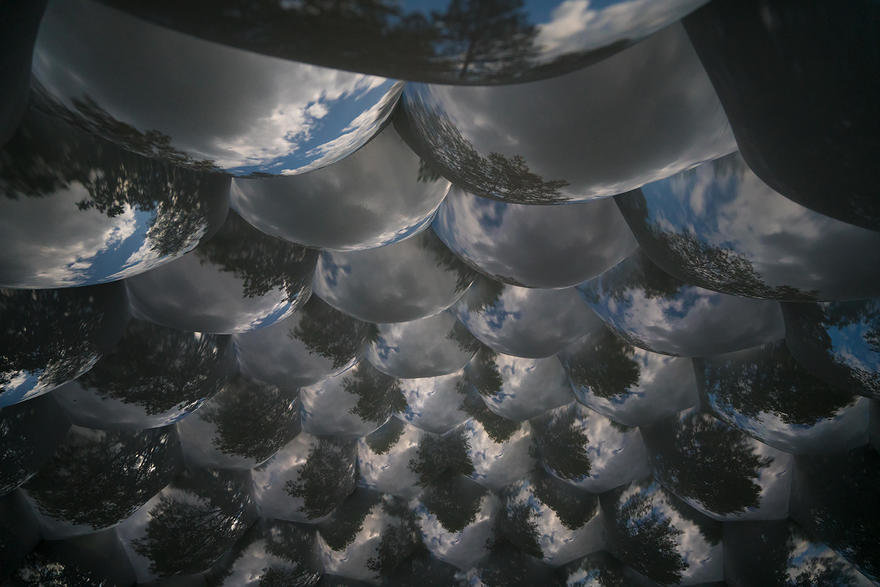 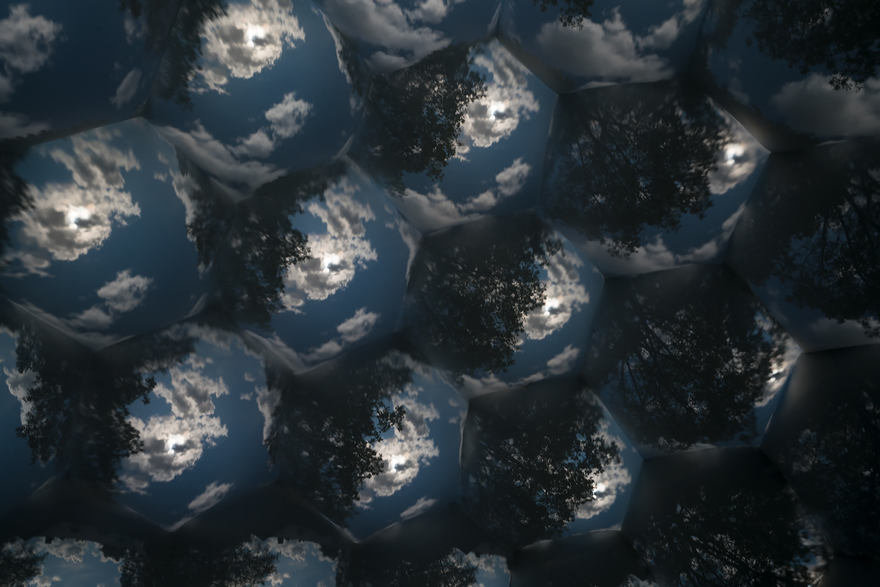 Cassidy Batiz Fragmented Reality Each camera captures an image that is mostly the same as the cameras surrounding it, creating a surreal, fragmented reality. 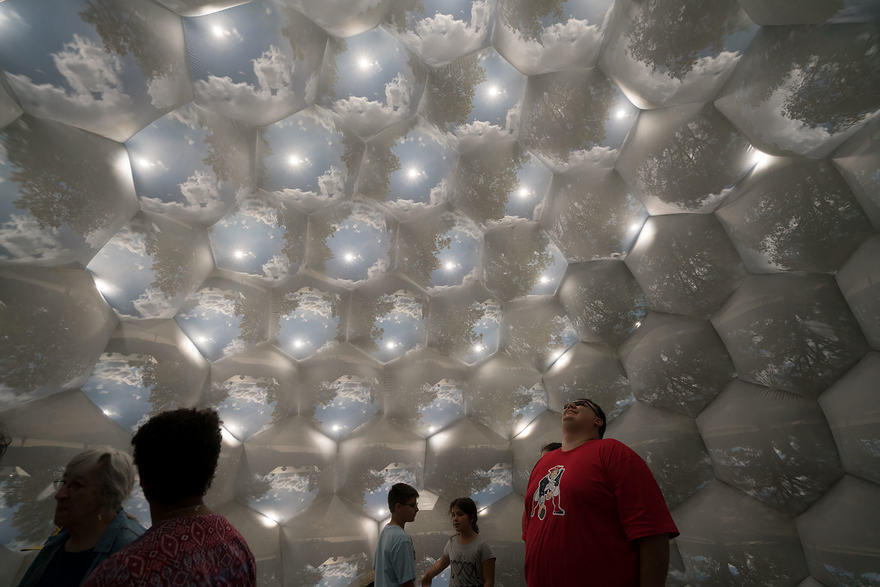 Cassidy Batiz Diagram of Exposure Fluctuating being shade and sunlight, the Compound Camera is a physical diagram of how exposure works in cameras. 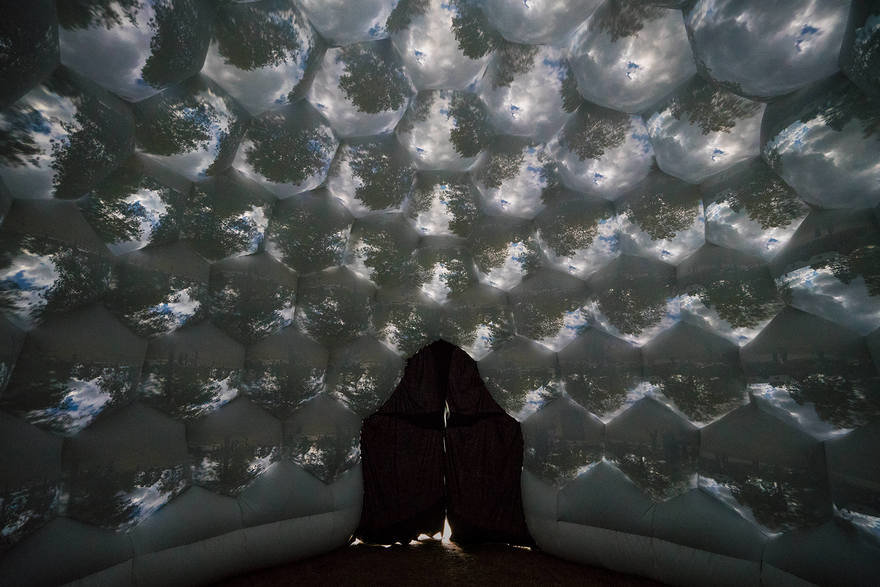 Cassidy Batiz Fly's Eye The cells are arranged in a geodesic pattern to form a dome, giving viewers an experience that can be compared to being inside a fly's eye. 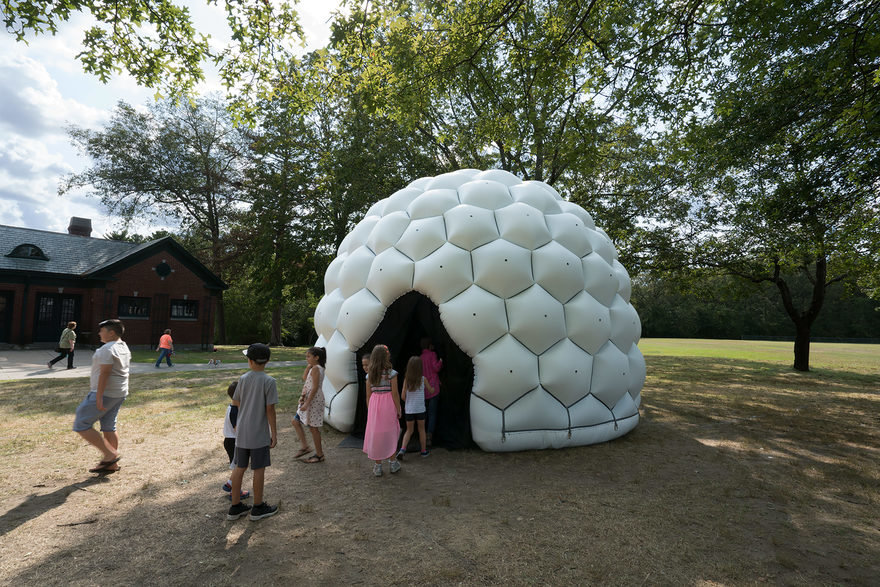 Cassidy Batiz Interaction Between Outside and Inside Once viewers understand how the Compound Camera works, they will often run outside and dance in front of the cameras. 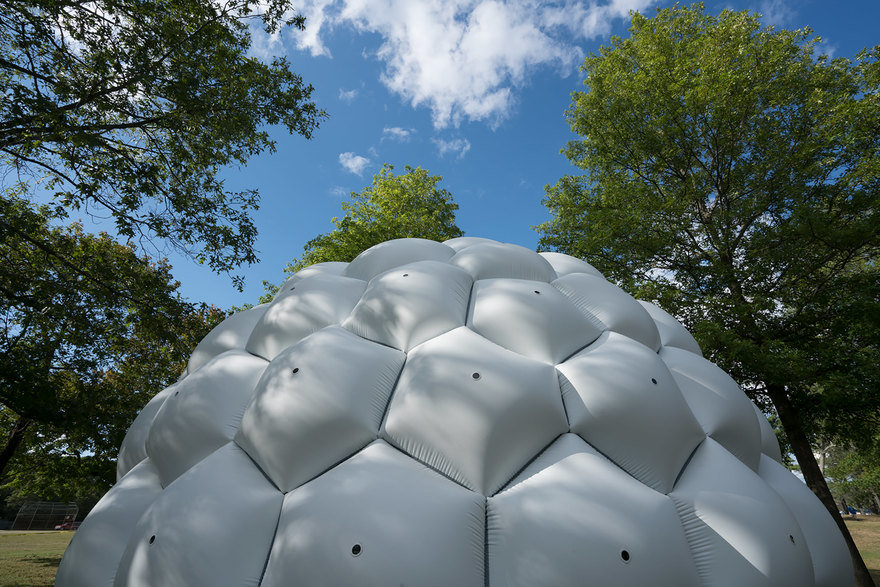 The first cameras ever created were called "camera obscuras," meaning "dark room" in Latin. A camera obscura utilizes a simple optical phenomenon—a pinhole placed on the exterior of a darkened chamber allows a small amount of light to travel through the chamber and project an inverted image of whatever is outside onto the opposing surface. Observations of this phenomenona date back as far as 500 B.C.. This ancient technology has been used over the years by artists, and, with the addition of lenses, serves as the foundation to all modern cameras.

The Compound Camera builds on the same principles as the traditional camera obscura, with a few tweaks. For one, while most cameras use rigid materials, the Compound Camera it is a flexible structure made entirely out of light blocking fabric and air. Second, each of its 109 cells contains a single magnifying glass over the pinhole that focuses the incoming light to create a crisp image without having to increase the volume of the cell. These hexagonal cells, which are each a small camera, are arranged in a geodesic pattern to form a dome, giving viewers a novel experience of their surroundings that can be compared to being inside a fly's compound eye.

Much of the inspiration for this piece comes from the biology underlying human perception. Many people don't realize that at any given moment we can only see a two-dimensional representation of whatever is in front of us. It is only after our brains stitch together multiple images from different perspectives that we perceive our surroundings to be three-dimensional. The Compound Camera puts many of these perspectives on a single surface, revealing the multi-layered nature of vision and challenging visitors' perception of their world. Its pneumatic flexibility simultaneously introduces an element of play into this experience, allowing visitors to tangibly tap into their own curiosity while facilitating an exploration of the fundamental properties of light and optics.