Every day, NYC turns 1.3 billion gallons of sewage into a material called biosolids by feeding it to microorganisms. Though once utilized to enrich soils, around 2.8 million pounds of biosolids has gone to landfill every day for the past ten years. Sum Waste proposes creating a sustainable industry out of it by producing bioplastics and a pigment from it instead.

The final form of this project is a sustainably designed pen and ink from materials derived from biosolids. The pen barrel is designed to be made of PHA, a soil compostable bioplastic that can be produced by feeding biosolids directly to bacteria. While this may seem like a future technology, the Dutch Water Authority is already producing it through their Energy and Raw Materials Factory. One of the designs from this initiative, MOURN by Studio Nienke Hoogvliet, is on display at the Cooper Hewitt.

More than just a material study, the Sum Waste pen is sustainable by design and function. The PHA pen barrel interacts with its corresponding refill to retract like a normal pen, but with a twist that saves a lot of carbon.

Existing retractable pens require multiple parts made from different materials to function, making the interior workings of these pens intimidating to consumers. The Sum Waste pen is made of just two components; the PHA barrel and a standard ink refill with a heat-molded top. The helical channel in the pen barrel bends the ink refill to create just enough friction that the pen tip will not retract when writing. With a slightly harder push of the pen against a surface, however, the tip smoothly retracts. To expose the tip again, simply push on the flat top of the refill. The flat top of the refill is heat-molded from the existing polypropylene tube that holds the ink so as not to add any extra parts to its production. This design, combined with the helical channel in the barrel, eliminates all of the small parts found in existing retractable pens. This makes the pen less carbon heavy to produce, easier to recycle, and saves lot of headache for consumers that find retractable pens confusing and intimidating to refill or dispose of properly.

Users purchase the components separately, putting the barrel and refill together themselves. This is meant to highlight the different material streams, life cycle lengths, and functions that each component serves. Users can employ the same barrel for multiple ink colors, or keep their ink if they want a new barrel. To dispose the pen, users simply compost the barrel and/or recycle the refill to be reclaimed in full. The pen is over an inch shorter than its competitors yet is easy to hold and contains the same amount of ink as normal ball point pens. 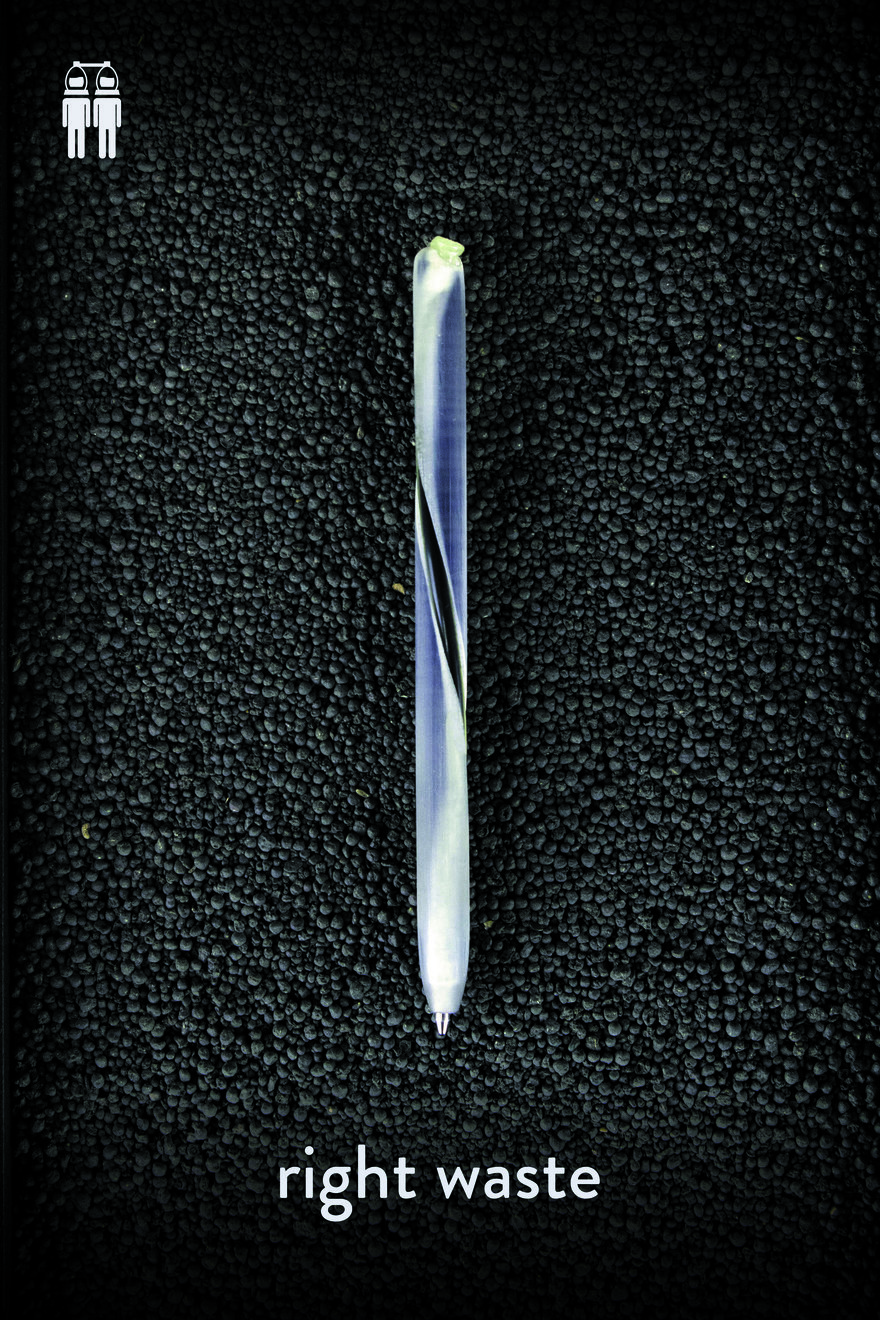 Garrett Benisch Assembling the Pen The pen refill slides in the helical channel of the barrel with a simple push. 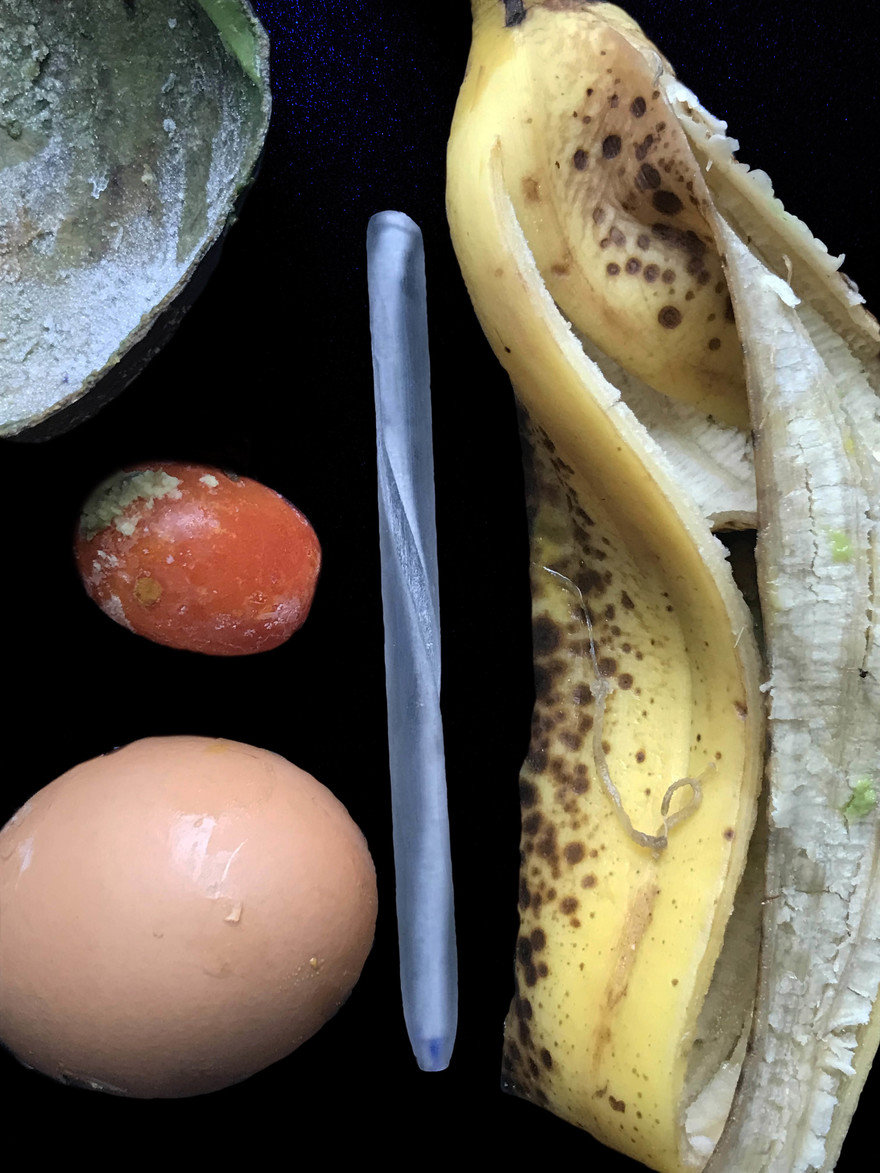 Garrett Benisch Biological Nutrient The PHA pen barrel can be composted with food and yard scraps or even buried in a backyard where it will decompose in a matter of weeks. 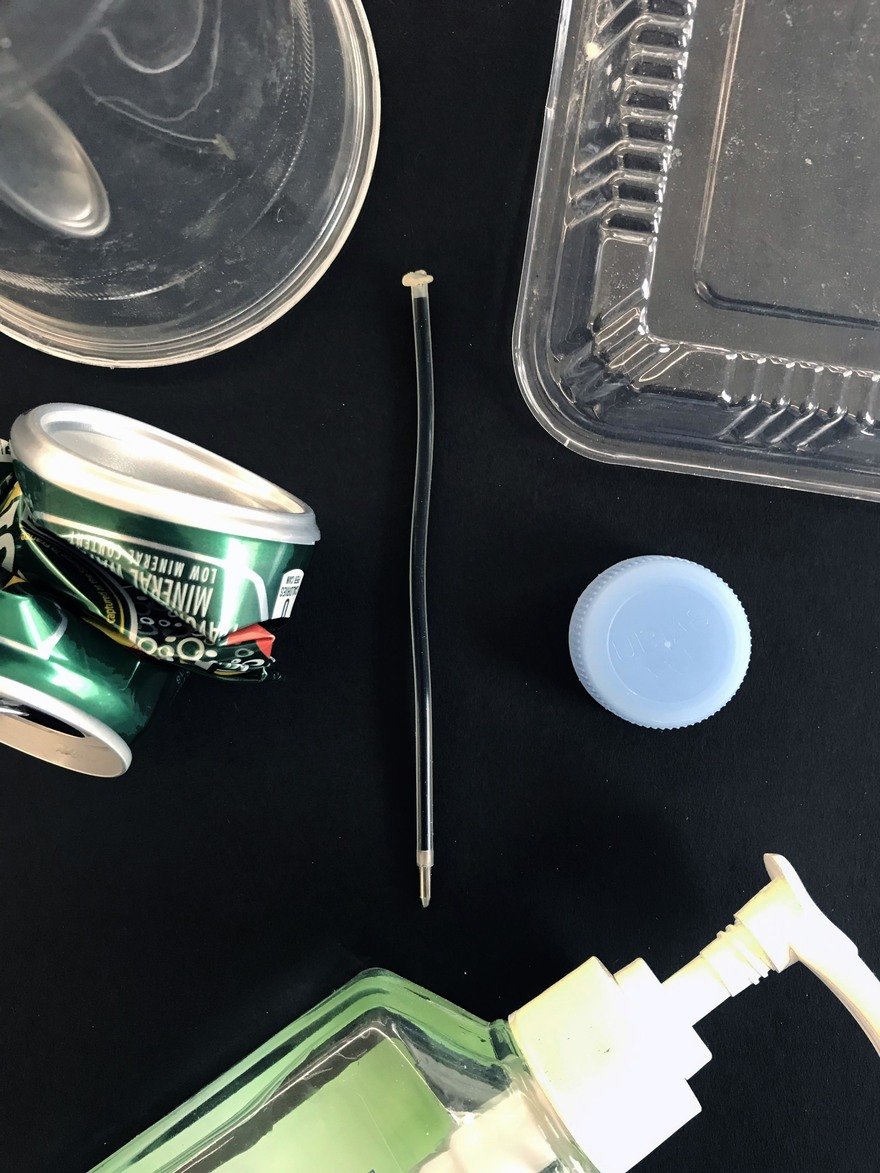 Garrett Benisch Technical Nutrient The ink refill is a standard brass and polypropylene component with a simple alteration on top of it. This component can be fully recycled. 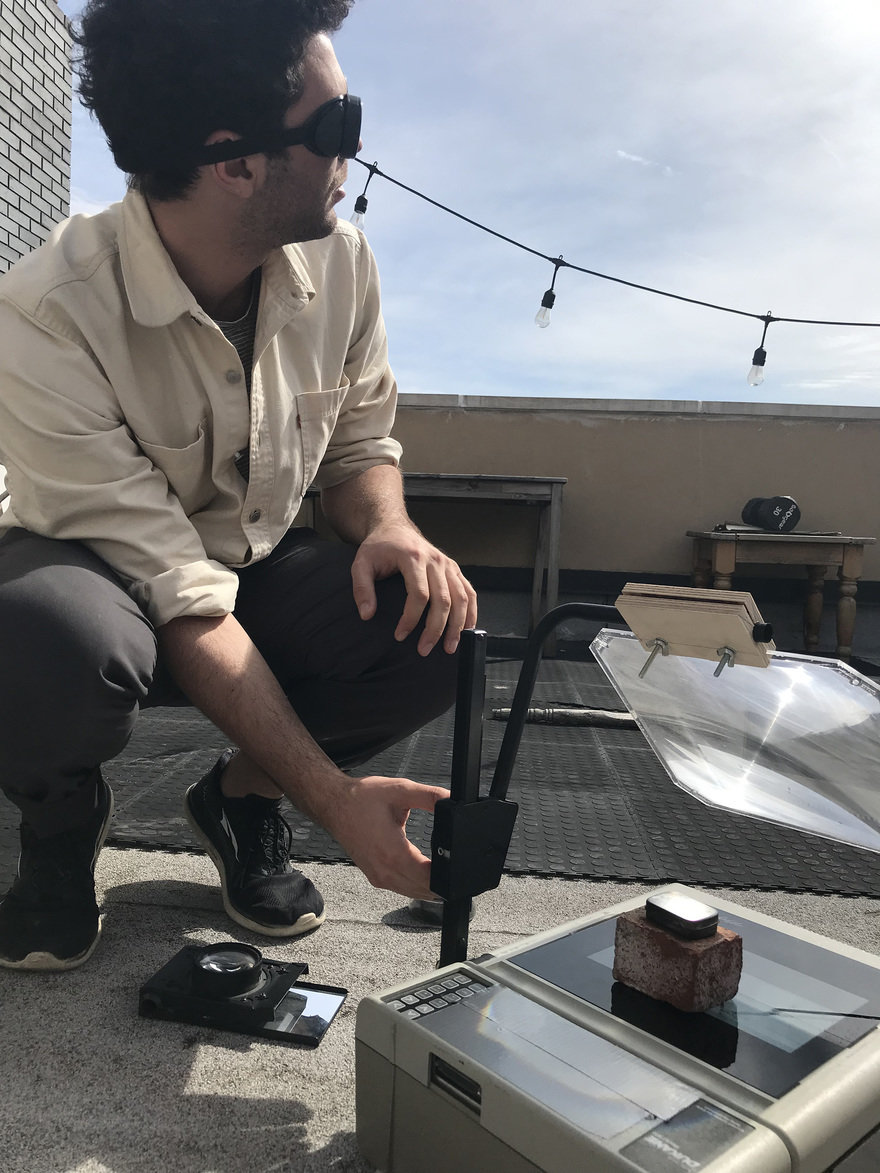 Elizabeth Bridges Solar Carbonizer1 Small samples of biosolids were carbonized by focusing the sun's rays through a fresnel lens taken from an overhead projector. 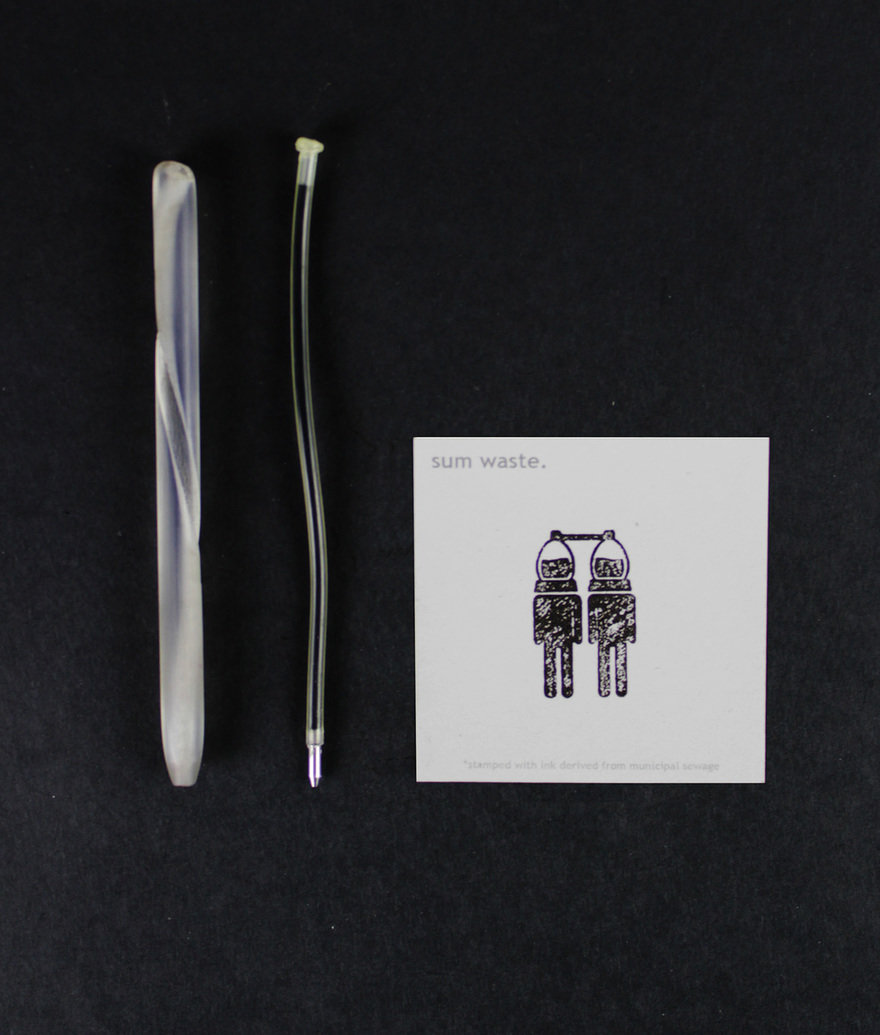 Cinematography by Zach Jamieson Making Ink The carbonized biosolids pigment was hand ground and suspended in a natural oil to create a rudimentary ink. This ink is featured on every Sum Waste business card.

Cinematography by Zach Jamieson Solar Carbonizer2 Small samples of biosolids were carbonized by focusing the sun's rays through a fresnel lens taken from an overhead projector. 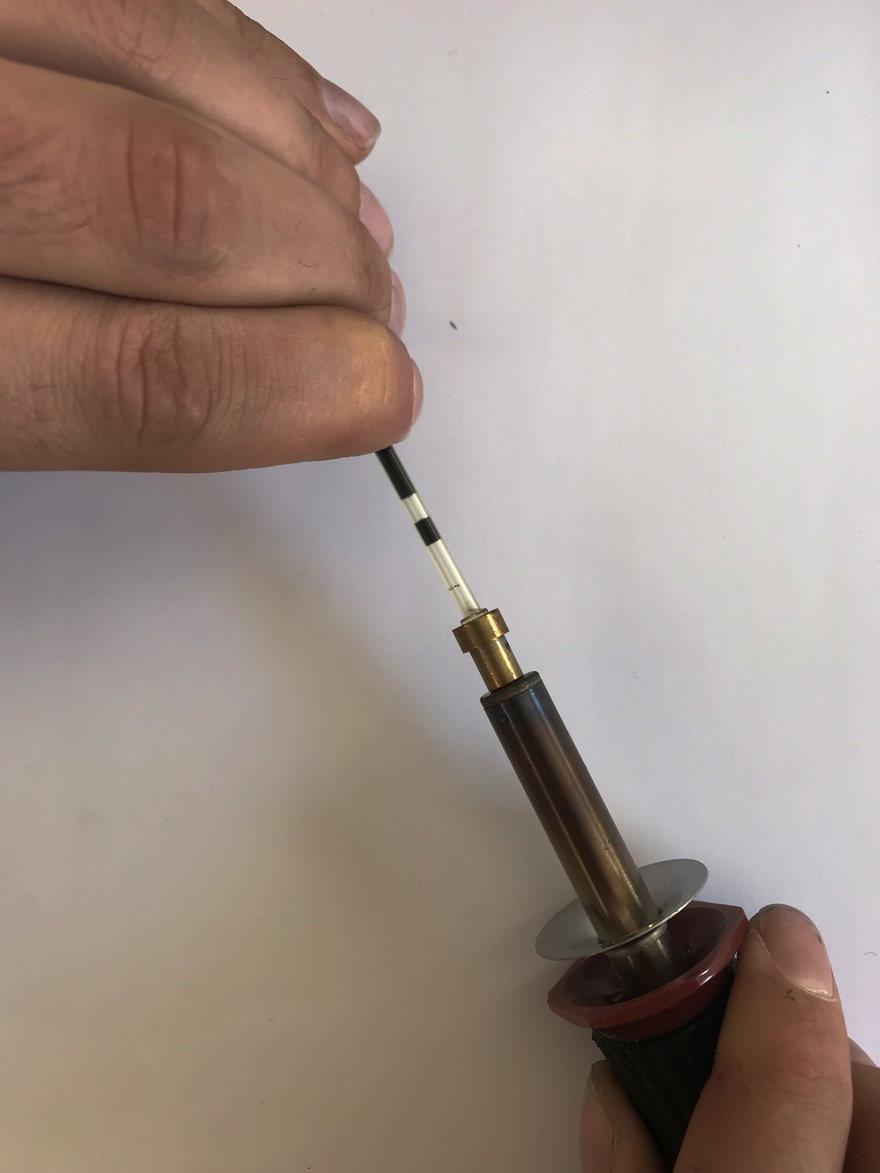 Garrett Benisch Using the Sum Waste pen The helical channel in the pen barrel bends the ink refill to create just enough friction that the pen tip will not retract when writing, yet retracts with a simple push. 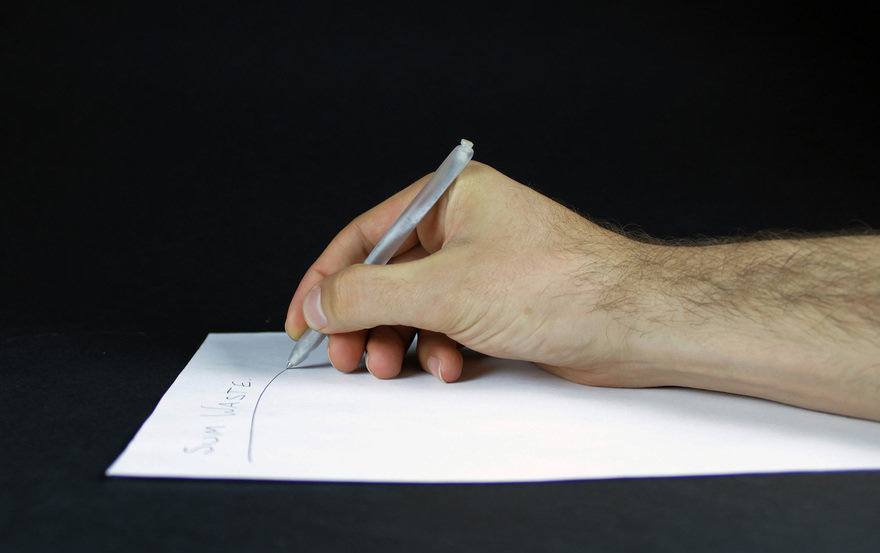 Garrett Benisch Writing with the Sum Waste pen The helical channel in the pen barrel bends the ink refill to create just enough friction that the pen tip will not retract when writing, yet retracts with a simple push.

This project also rethinks what is inside a pen. The black pigment used in inks and dyes called Carbon Black is made by burning fossil fuels and collecting the sooty particles. By carbonizing biosolids, the pigment can be replaced by one from a source that does not need to be mined and is constantly being produced. Rather than wasting energy in carbonization, the sun was utilized to test this idea. Small samples of biosolids were carbonized by focusing the sun's rays through a fresnel lens taken from an overhead projector. The carbonized material was then ground, suspended in oil, and hand stamped on cards made of recycled t-shirt fiber. Rather than conceptualizing the idea of a material made from biosolids, viewers that pick up these cards from an exhibition of this project are forced to confront the material in their very hands.

This pen offsets the current plastic pen market and acts as a 'gateway product.' According to this article published by the Guardian, Bic sold their 100 billionth pen in September of 2005. Averaged since their opening in 1950, that's 57 pens sold a second by Bic alone for 55 years.

We are comfortable with pens. Disposable ball point pens enter and exit our lives in multitude on a daily basis; they are present at every receipt signed, hotel room entered, and pile up in drawers in all of our desks and homes. We write notes on our hands, hold our hair up with, and even chew on pens regularly. While always there for you, the ink in these pens is rarely spent, and almost never refilled. A pen made with materials derived from biosolids brings the material to this same comfort level, opening the door to producing other single use plastics with it.

This project was designed and produced by Garrett Benisch for his Master of Industrial Design thesis at the Pratt Institute. Sum Waste has recently won the Role Models competition from the Parsons Healthy Materials Lab.

Garrett will be sharing his project at the following event by the NYC Awesome Foundation: