When considering data as the oil of the 21st century, each of us is sitting on a small ground treasure—a resource that is being discretely mined by the most valuable companies in the world. As users of modern services and products, we have long become habituated to trade-offs in which "free" services are offered in exchange for some bits of our personal data. The IoT has introduced a new kind of object into our homes whose functioning greatly depends on collecting such information: Products that are able to observe the users, have the ability to learn from their observations and then make their own decisions without further human interference. With the comfort of automation also comes a subtle danger in our connected devices which process personal information about their users every day. If attempts to restrict the flow of our personal data would consequentially restrict our access to said services and products as well... do we have no other option but to obey and share?

The "Accessories for the Paranoid" explore an alternative approach to data security. As our physical environment reads, collects and stores an increasing amount of user information, this series of parasitic objects are designed to produce fake data. Through blurring our digital profiles, our true data identities get to hide behind a veil of fictive information.

a project by Katja Trinkwalder and Pia-Marie Stute; supervised by Prof. Andreas Muxel at KISD, Cologne. 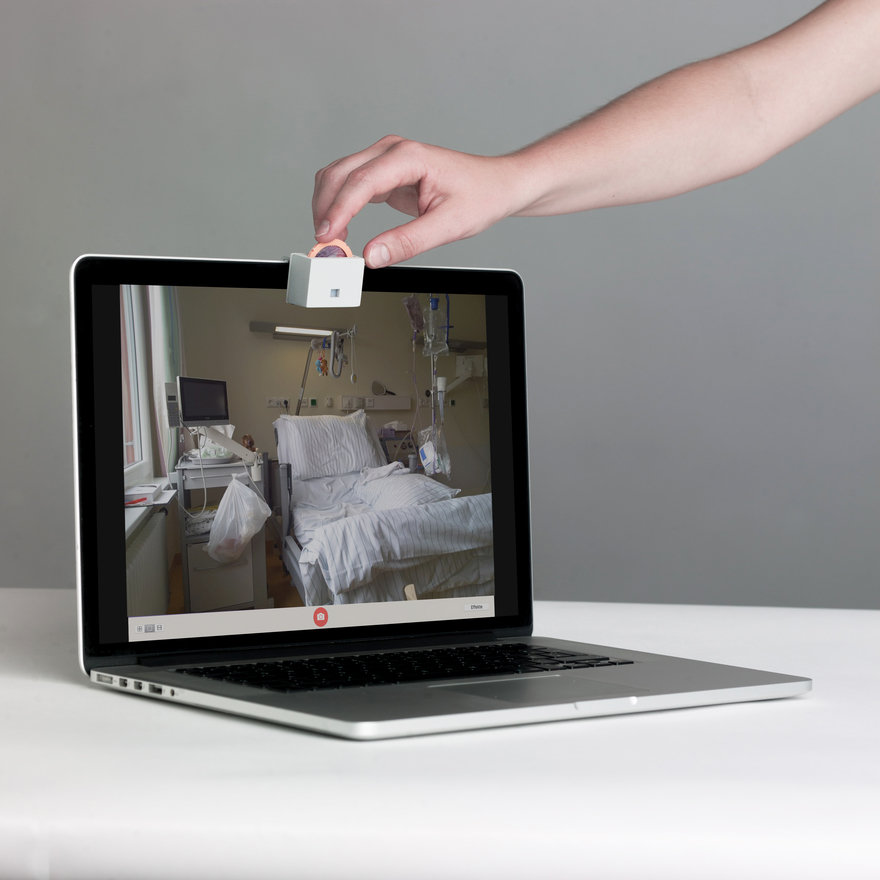 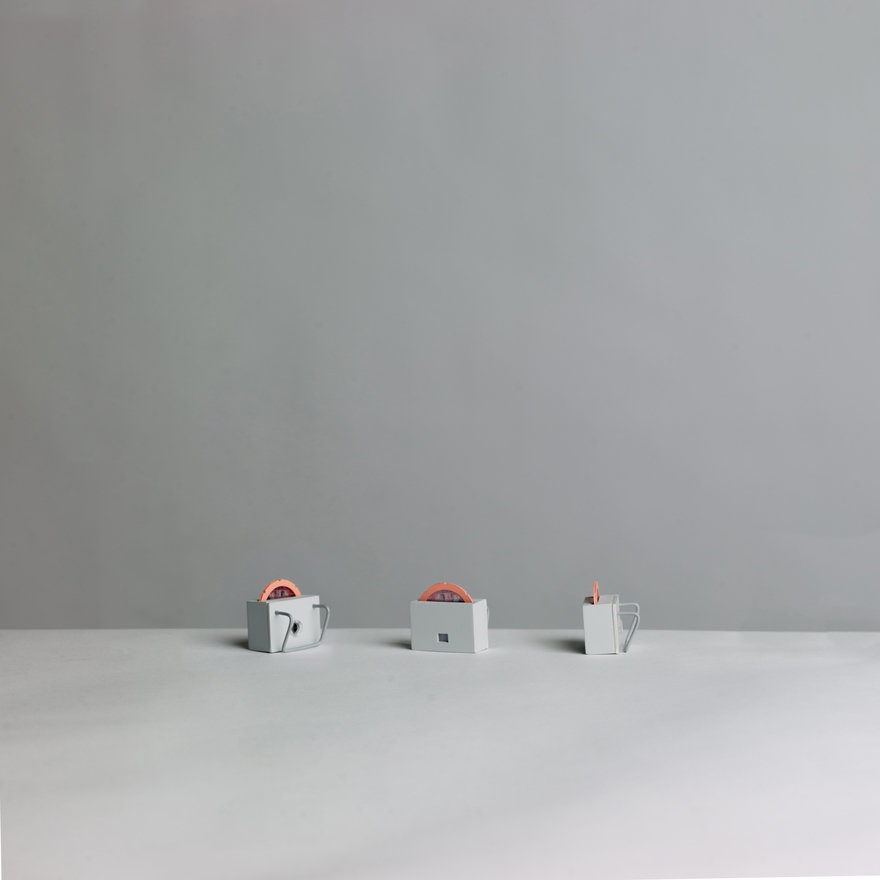 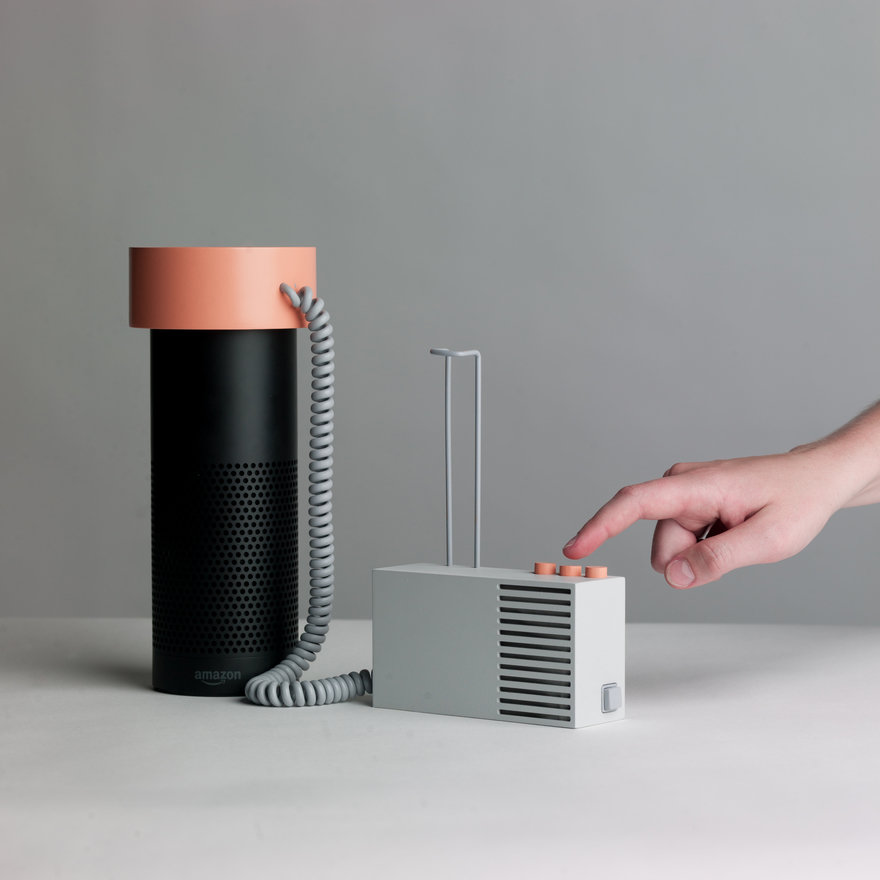 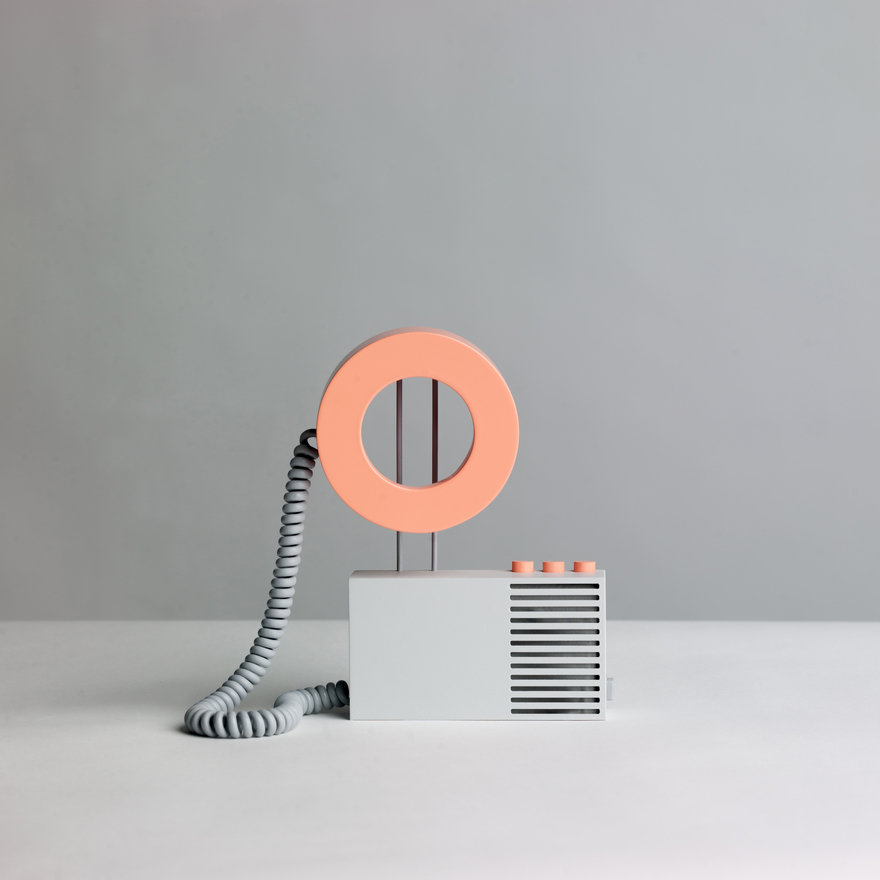 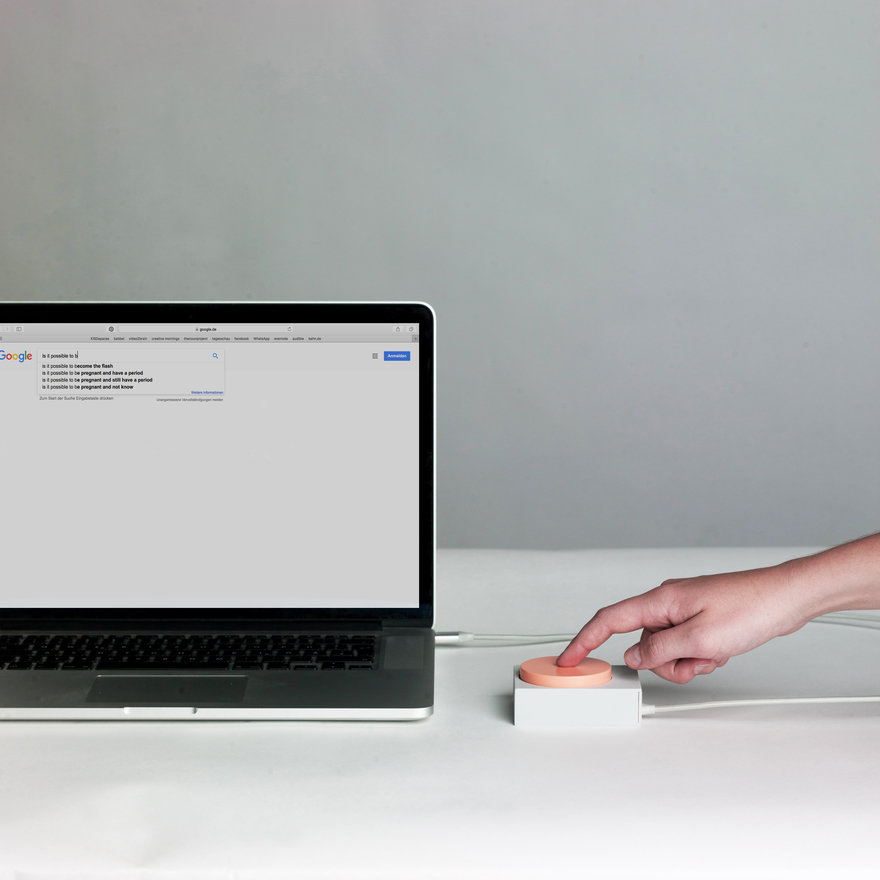 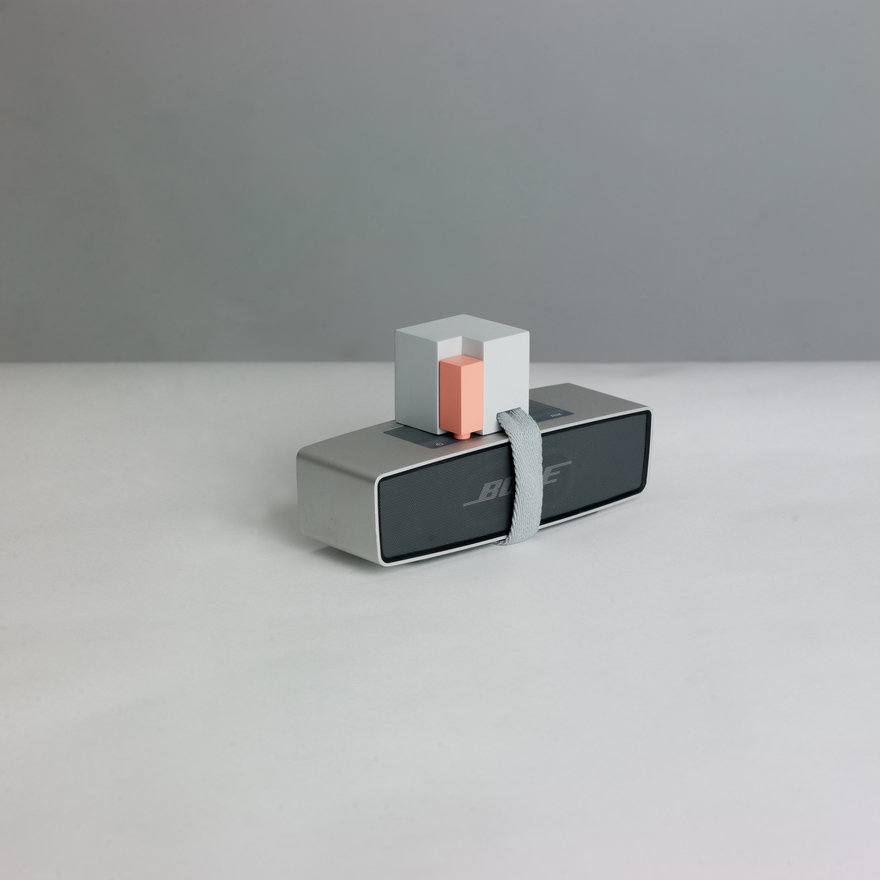 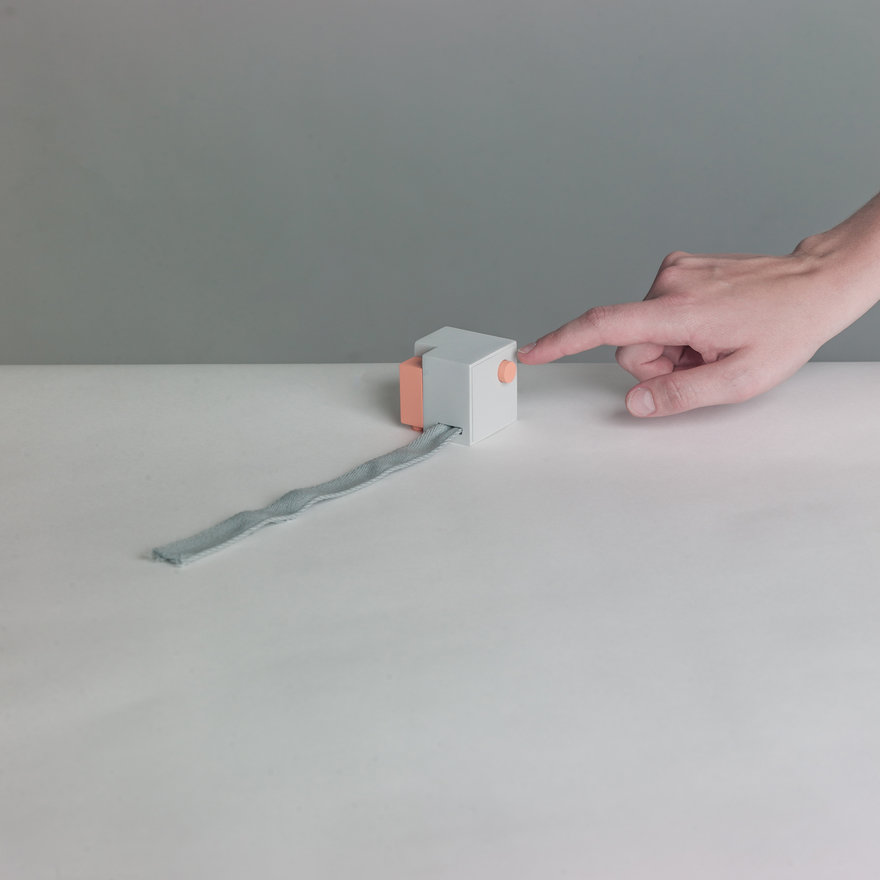 OBJECT A: UN-HACKING WEBCAMS Anyone with a little sticker on the top center of his laptop is aware that hacking a webcam is not hard, neither for NSA nor the nerd next door. Object C takes the principle of a toy camera and applies it to data security by displaying different scenes through the glance of the webcam.

OBJECT B: KIDDING ALEXA The Echo, Amazon's voice assistant for the connected home, reacts to the call of „Alexa". Thus having to listen at all times, she observes, processes and collects data in her user's home whenever switched on. Object B will prevent your sensitive information to hit the wrong set of ears. The sound device feeds Alexa with fake information or allows to numb her when the situation calls for it.

It offers the choice between three modes to play over the earphone: 1. white noise that lets no information slip through; 2. pre-recorded quests to occupy her with useless tasks; and 3. dialogues from random movie scenes that have her collect fake information about her user and their common surrounding.

OBJECT C: CREATING RANDOM TRACES Connected to any computer, Object B will generate fake online data. On the push of the button, an algorithm will randomly create site-specific content on the websites of services such as google, facebook, youtube, twitter or Amazon. Concentrating on the individualities that are specific to the service, the libraries in the code will be unpredictably influenced by changing content.

At the push of its button, Object C will open the browser and access a popular service to leave fault digital traces: The wish-list on Amazon will be filled with unexpected interests. A post on twitter will be completed through random emojis replacing keywords. The Facebook account will spread indefinite likes. On google search, partially typed requests will be continued through the google auto-completion.

OBJECT D: BLURRING USE PATTERNS As a parasite to any device that is able to collect data, object D pushes their buttons randomly. Activated during the night time or when the user is not actually at home, the object creates blurred user patterns and confuses the host device about its user's daily routines.