The Love of Design

Henry Ford popularized automobiles with a breakthrough in performance and price, but this wasn't a sustainable advantage. Styling and design were rapidly established as essential weapons in the ensuing battle for auto sales. Every decade since his industry has written another chapter in the history book of societal trends and fashion, as well as technology.

Bicycle development has been very different. The bicycle has retained its essential form since the safety bicycle displaced the penny-farthing well over a century ago. The design language hasn't changed and has become ubiquitous. Certainly this suggests an enduring quality, but I suspect it also reveals a pecking order. The bicycle is always the bridesmaid and never the bride.

The Koru Bicycle project is my response to this reflection on vehicle history. I'm fascinated with cars and automotive design, but every day I prefer to ride a bicycle rather than drive a car. I wanted to explore the arena of bicycle design, but adopting a pattern of thinking that's more usually associated with automotive design. Ultimately I wanted to explore if there was a common ground between my interests in both of them.

Students and colleagues at University of Canterbury - encouragement and inspiration. 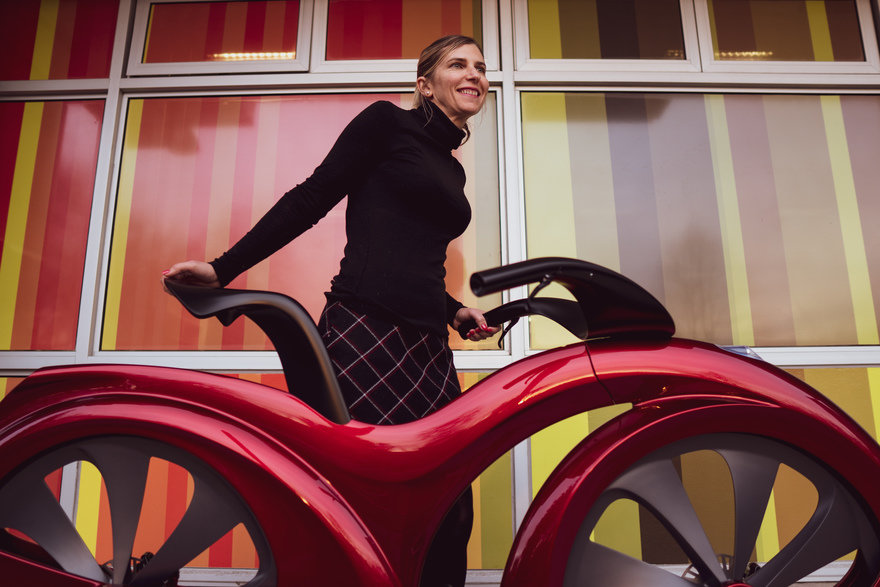 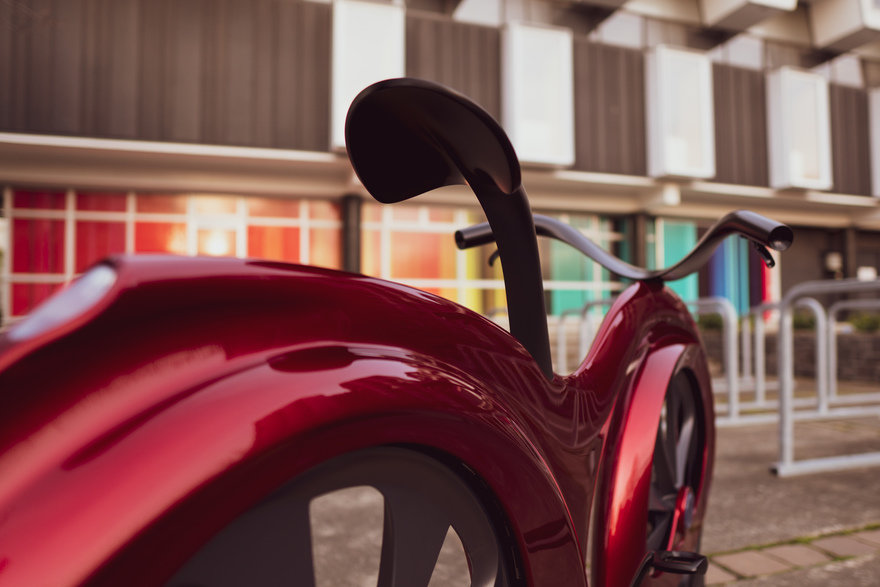 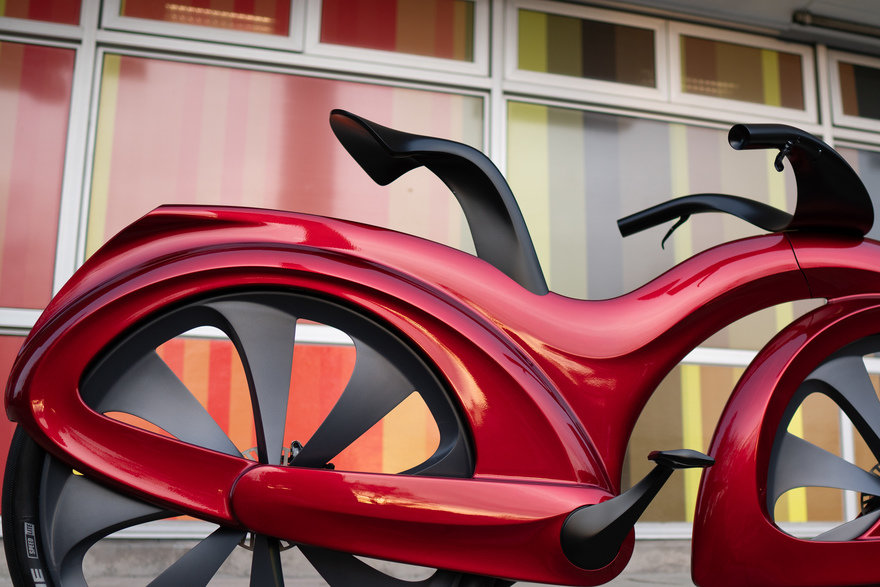 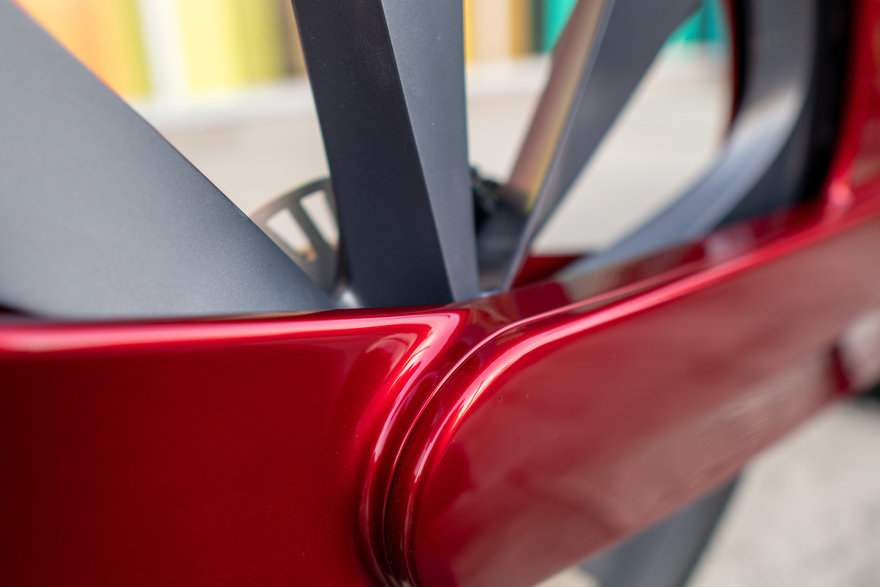 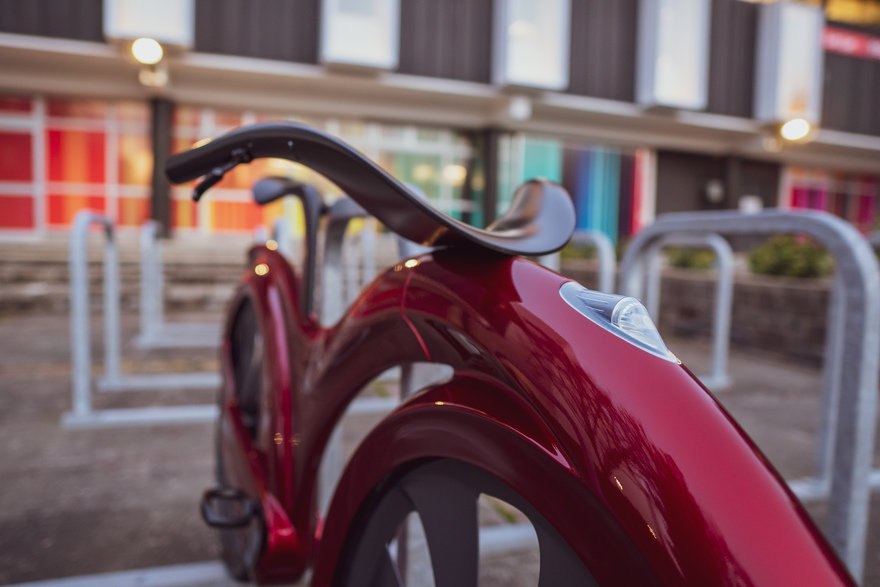 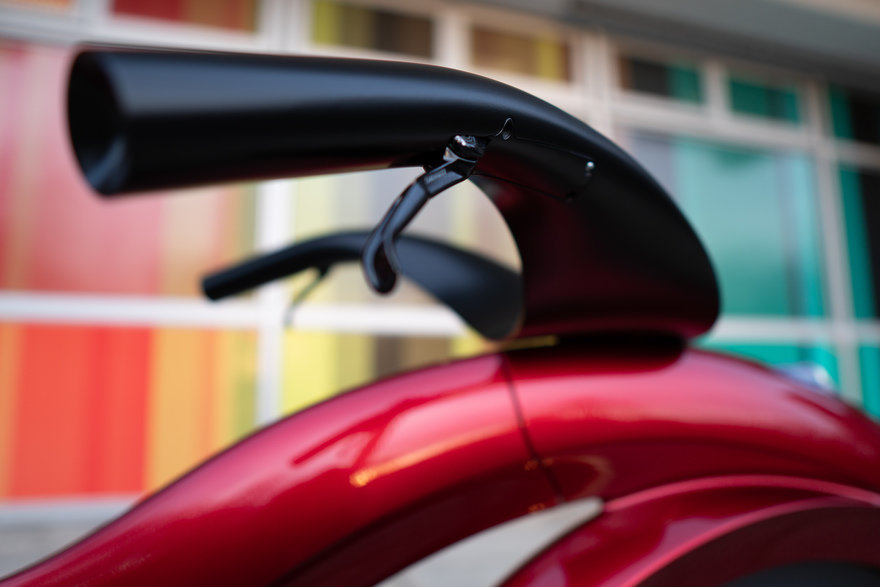 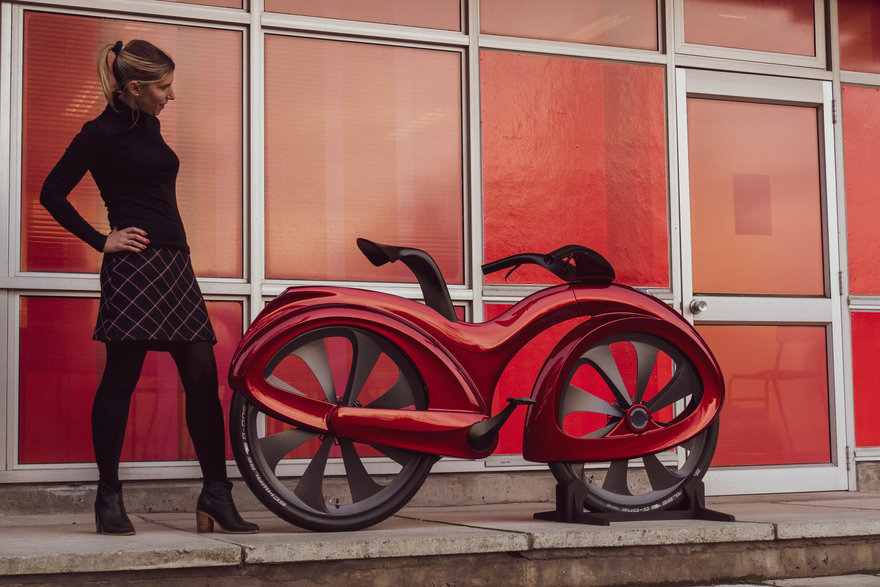 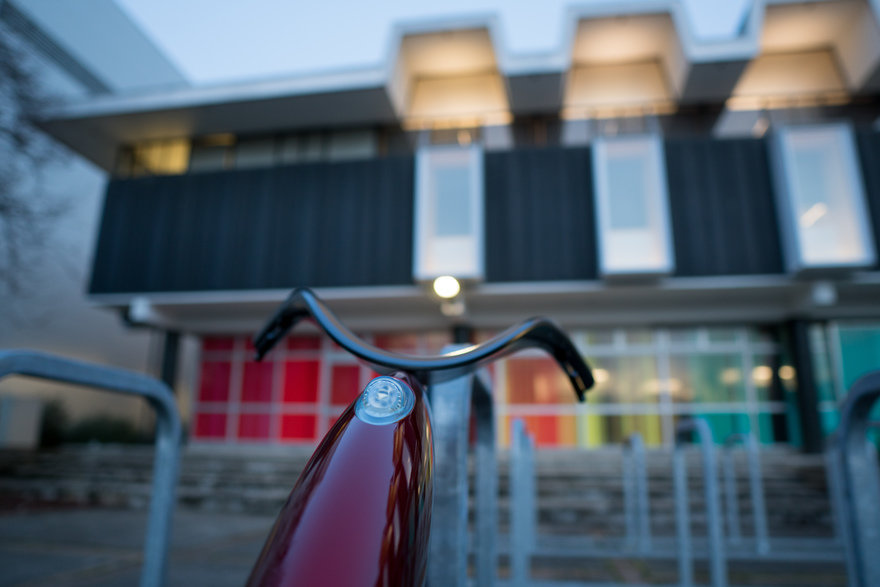 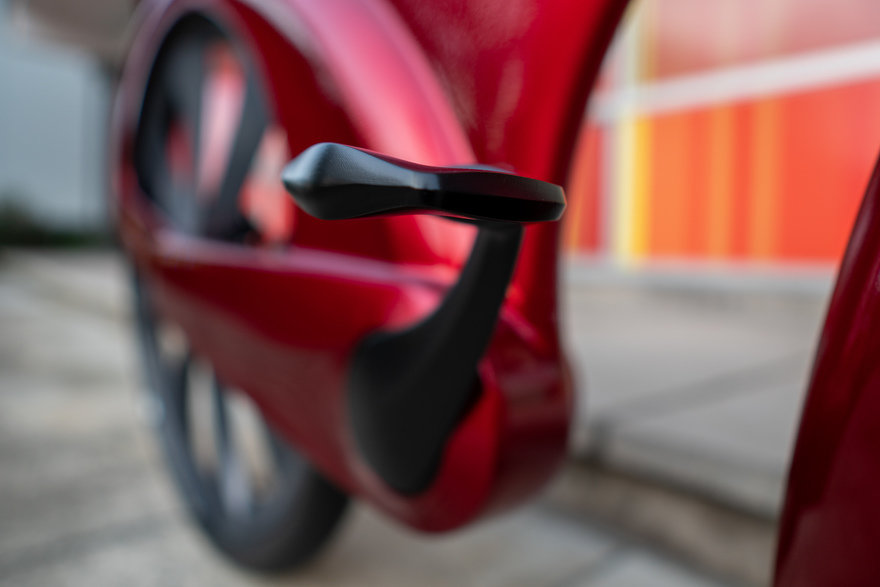 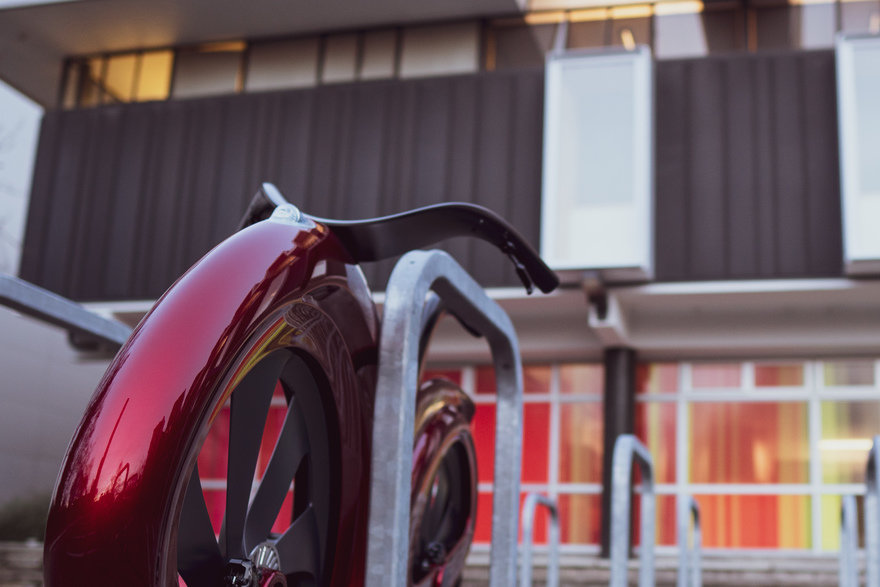 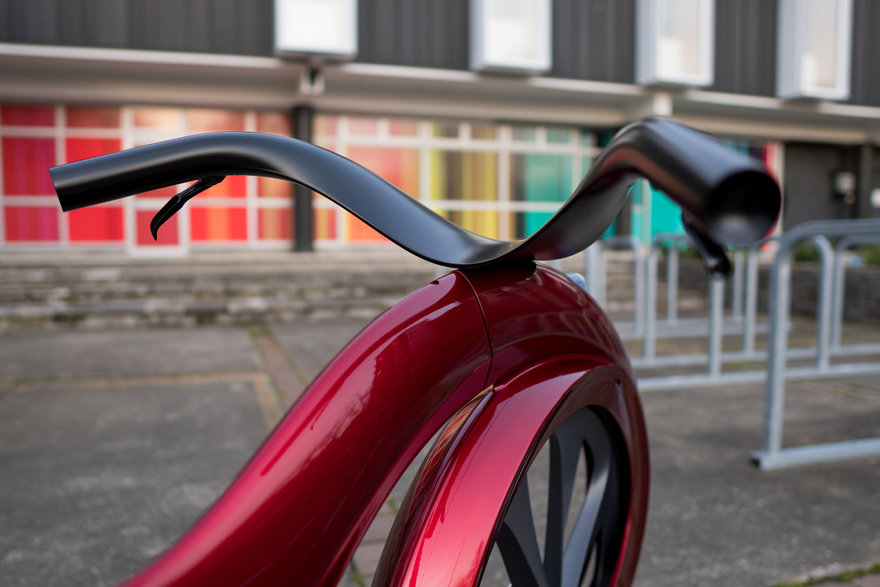 As a Mechanical Engineer working at the University of Canterbury, in New Zealand, I'm more known for indulging my interests in race cars and rockets than with bicycles. In truth I do tend to enjoy things which go fast, but I've come to realise it's not because they're fast. It's more that speed and elegant design usually go hand in hand. When I decided to design and build a bicycle I wasn't interested in making it faster than any other bicycle, but I did want to give it a good dose of elegance.

While most of us aren't consciously aware of it, bicycles have a design language which is quite divergent to what we see in most other modern consumer products, including cars. It's a sort of exoskeleton design where everything is on show. Bolts, screws, gears, cables, brackets, levers and so on aren't just part of the product; they visually are the product.

I'm OK with this design language. It has an honesty and simplicity about it which can be appropriate, but it's also the symptom of what I see as the fundamental difference in thinking when compared to automotive design.

This informed the guiding theme for my design. My objective was to integrate the bicycle components as much as possible, both functionally and aesthetically. To create something which is coherent and appear more as a consumer object than a machine. The hope being to invoke the type of emotion a person might feel for a beautiful car, when actually they have no interest in cars at all.

The most interesting experience for me is to discover where function and aesthetic design can provide for each other rather than competing. A good example of this is the wheel fenders. Being an all-weather cyclist myself, I'd decided they were a functional necessity. Not wanting to include them as additional parts, with associated brackets and fasteners, it occurred to me they should become part of the frame itself.

Once this ball started rolling it also became apparent that the traditional front fork arrangement wasn't required either. The front wheel fender, which is now also the frame, can comfortably do the job of the forks too.

Another useful discovery came from my unwillingness to have the rear wheel attached in dropout brackets, which is the usual approach. My solution is to use a through axle similar to that which modern bicycles use in the front wheel. Obviously the rear wheel also has to be connected to the rear sprocket, for which I've devised a simple mechanism which automatically engages the two when the axle is tightened.

The end result is a far less cluttered rear wheel mount, but the real beauty is that the wheel can be removed without ever touching or even seeing the chain drive. The chain and sprockets stay sealed and clean, which largely eliminates one of the least loved bicycle maintenance tasks while also improving the efficiency and durability of the system. In other words the aesthetic design requirement has led directly to a valuable functional improvement.

My technical expertise is centered on Computer Aided Design, so I tend to rely heavily on digital tools to resolve the surface sculpting. I always start with pencil and paper to quickly grasp a concept, but then work with software to iterate through variations of the idea. I enjoy the sense of discovery this gives me. It's as if my subconscious mind knows what the design should be, but it needs to use software to visually communicate proposals with my conscious mind.

Overall I'm pleased with the result. I've really enjoyed working with so much creative freedom, but having such a large design space to explore is also challenging. At every turn there are so many possibilities, both for going in a good direction or otherwise. Often the biggest difficulty, and joy, is trying to figure out which it is.

I don't know if I've yet found the common ground between my interests in design of cars and bicycles, but I do feel greater confidence that it exists and I'm that still heading toward it. In any case I hope that people find this project and experience interesting and thought provoking.