This the first product of Boaz ISI Ltd. - a modular, durable, low-cost, professional electric guitar. It was designed and developed for many years by Master-Luthier Boaz Elkayam and senior industrial designer Gilad Ben Tzur. After endless research and experimentation and several prototypes, this guitar is finally the center of a kickstarter campaign running until Sep. 28. 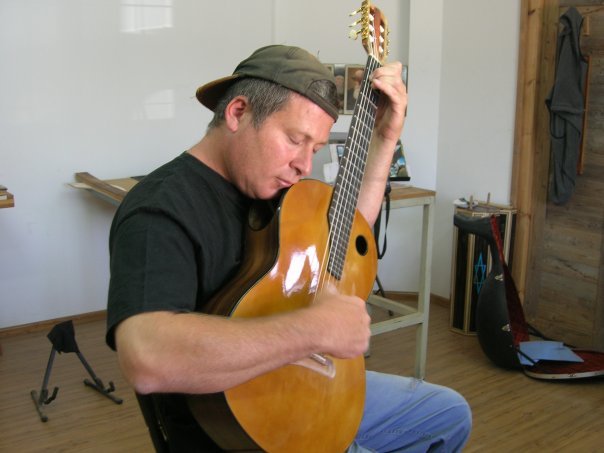 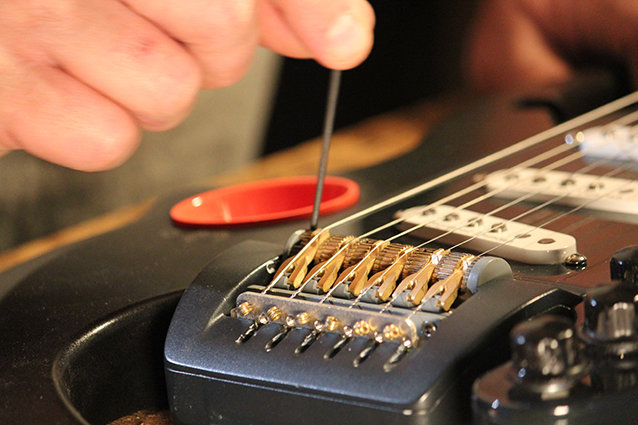 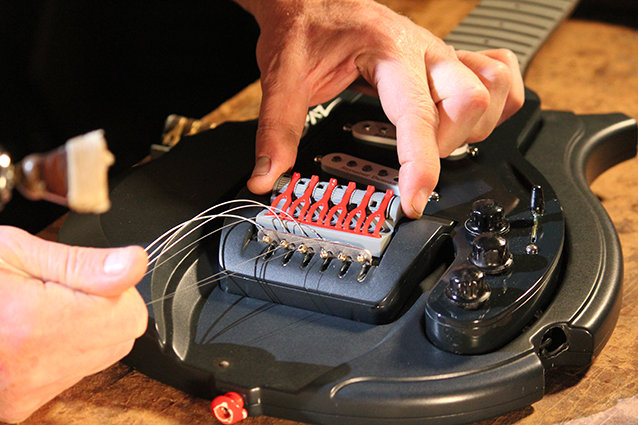 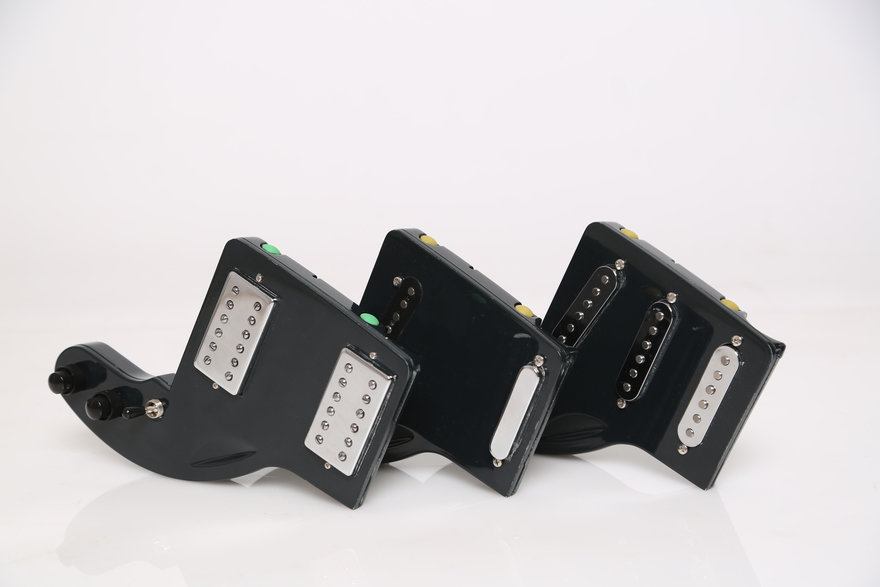 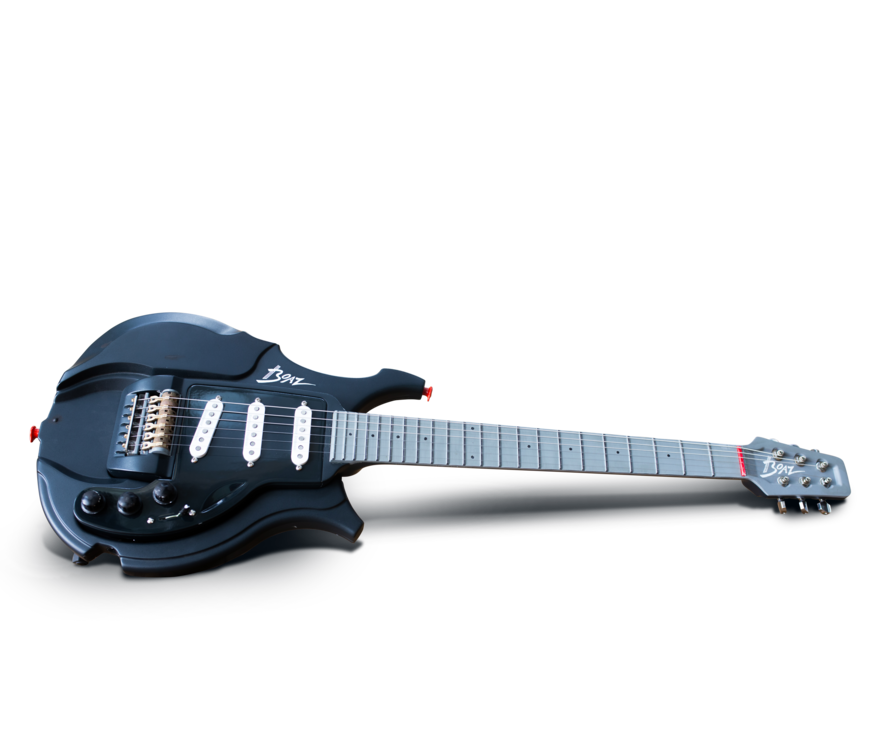 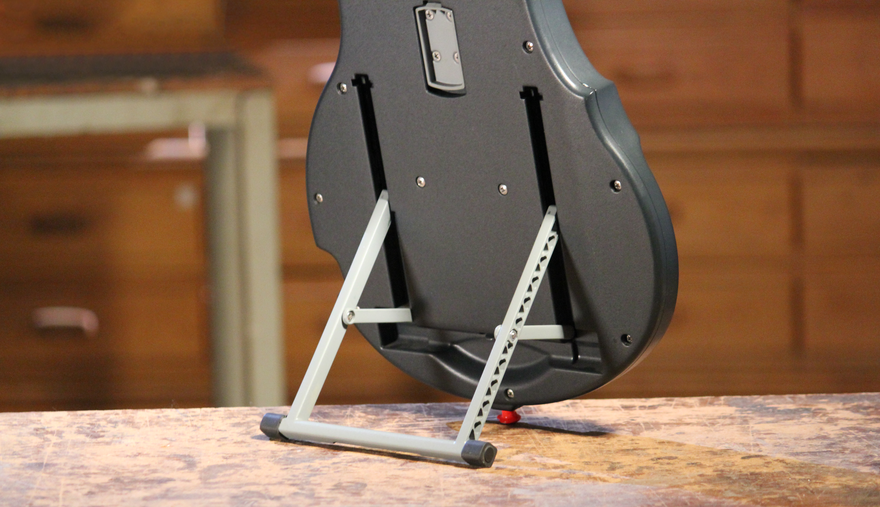 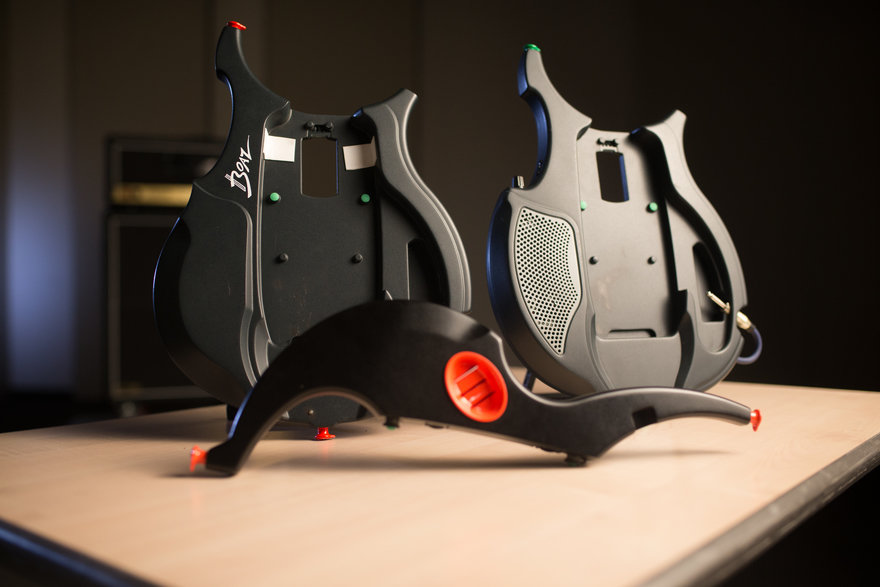 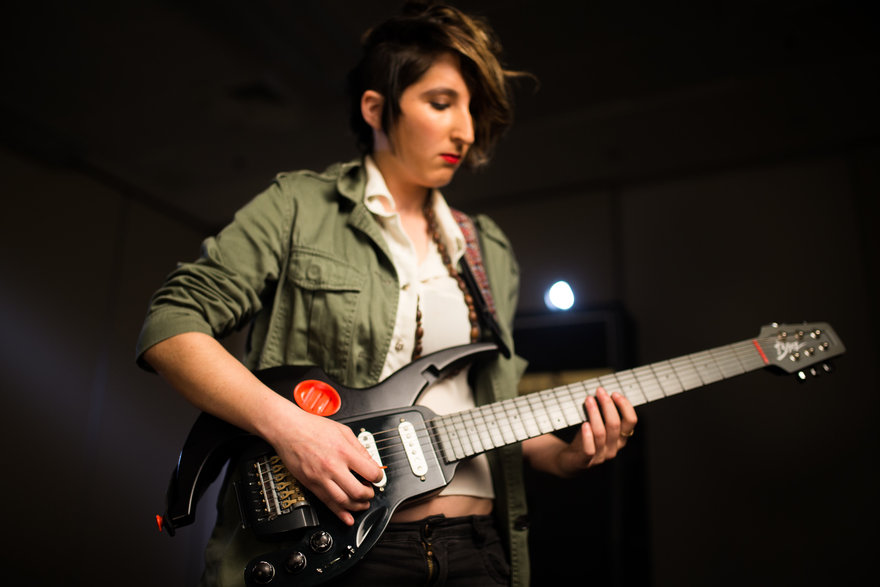 On Stage
Boaz ONE on stage 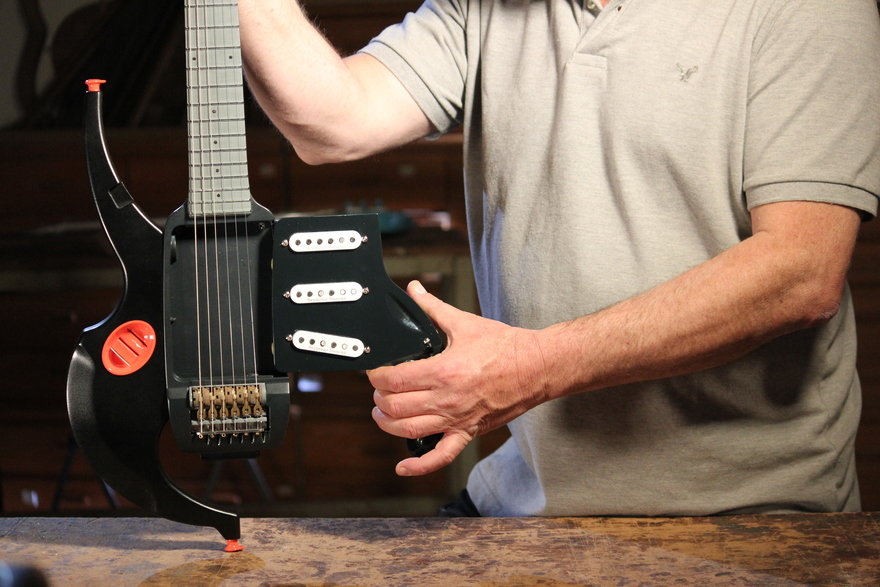 Pickup Switching
Inserting a Pickup Cassette to Boaz ONE 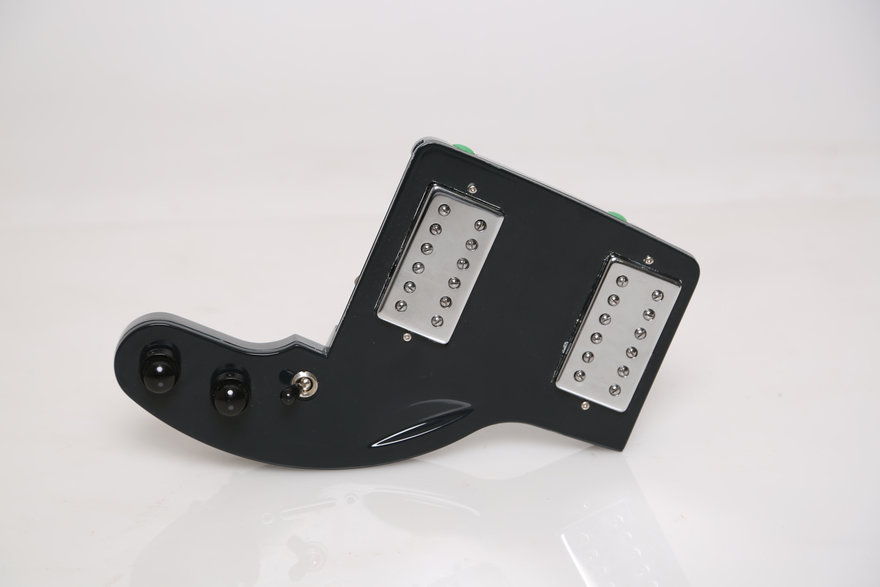 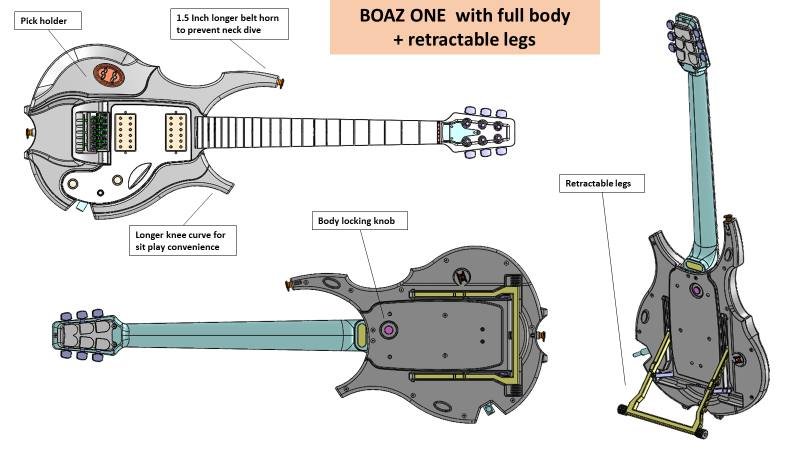 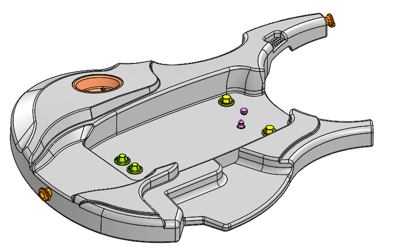 Boaz Elkayam is an internationally renowned luthier based in Israel. He worked on the team that created "Kasha Bracing" and contributed greatly to the groundbreaking guitars of Richard Schneider while working closely with Dr Kasha himself. There is no other guitar maker alive who has more knowledge of the science and physics behind the creation of sound in musical instruments.

Boaz realized early on that there were materials available to the modern instrument maker that could revolutionize the manufacture of the solid body electric guitar. His extensive knowledge led him to the conclusion that certain advanced plastics could well be the perfect medium to transfer sound in an efficient and tonally appropriate way. This led him on a 25 year journey to find the perfect material and create the perfect design.

A chance meeting in the early 2000's with Gordon Roberts (who has been credited among other things with reviving the popularity of the archtop jazz guitar in America) led to a discussion about modular design and Boaz was inspired to create an instrument that would satisfy the demands of all solid body electric guitar players. The goal was to produce a guitar that would allow a player to smoothly transition from country picking to rock and roll to Americana to heavy metal and never have to change guitar.

At this point Boaz teamed with the senior industrial designer Gilad Ben Tzur, a savvy polymers and metal products designer who served several industrial ventures and created a long array of industrial products in different areas. Boaz and Gilad worked together on the guitar for many years. They started producing prototype after prototype, while experimenting with numerous materials to fulfill the many different specifications a professional guitar must fulfill. In essence, the guitar internal structure is all about managing vibrations, a task that was never before challenged the same way using low-cost polymers and metal parts only. This challenge was taken, as Boaz always wanted to build a professional guitar that will fit low-cost high-volume repeatable manufacturing. Something that is not really possible with wood.

However, there is reasoning behind building guitar from wood. High-quality wood is strong enough to stand the strain of the strings and beautifully managing the sound. Getting to the same strength and sound needed endless a combination of materials and design that was never tried before. After many iterations the fifth major Boaz ONE prototype was completed in early 2019 and this goal was achieved. From that point, it was clear the next step is bringing the dream to life on the production line, and this is where the company is going these days.

In parallel it should not be forgotten guitar is not only about internal structure. Its external design was also a huge challenge. A guitar should not only look amazing, it should also be highly functional for the player, which is very far from trivial. Gilad and Boaz worked for years, on each different part of the guitar to make it look like a work of art, feel like a professional guitar, and function smoothly for any guitar player. Gradually they created a platform based on a core guitar, which is the basis for many different parts that may be quickly exchanged. The core guitar holds the guitar neck and ports that may connect to the different parts. Electricity was taken out of the port and into a pickup module (Cassette) that may be exchanged within seconds. Today, the company already announced 5 different such modules, which means 5 different kind of sound, normally available by 5 different guitars.

Boaz, Gilad, and Gordon have joined together with Kent Armstrong to develop a line of cutting edge pickup modules that will reflect the state of the art in pickup design and include many of the innovations that Kent is famous for. Kent grew up around some of the greatest names in guitar and pickup design. His father Dan Armstrong came up with the world's first acrylic guitars and introduced the world to modular pickups. Kent has rewired guitars played by Jimi Hendrix and learned pickup design as a teenager from Bill Lawrence. The Boaz line of pickup modules is being designed by Kent and will include exclusive switching systems that will open up an entirely new world of sonic choices.

The guitar body was also separated and there are currently 3 possible bodies that were already announced to be available. However, the options for bodies are endless. Each body shape may come in different colors and be made of different materials. One of the bodies that has been announced contains a retractable stand. Others may contain a pick-holder or an internal speaker. The company is planning to allow third party vendors to be licensed to manufacture different parts the suits the guitar specifications, which will allow the creation of a whole eco-system around the Boaz ONE, and provide players with endless options.

Another part that took a lot of efforts is the guitar bridge. Different options were debated, but for the first serial guitar it is expected to kind of bridges will fit the guitar core. One is a polymer bridge that will be pre-tuned and will only allow minimal adjustments, and the other is made of brass or aluminum, and will allow full control of the strings placing as wanted by the professional player.

Finally, in the spring of 2019 the guitar prototype was ready for a US tour. It has been played by several of the best guitarists in Nashville and New York and to a person they declared it to be extraordinary. Tony Garnier, Bob Dylan's music director, band leader and bass guitarist was so impressed he asked Boaz to develop a bass version for him. Richie Owens from Dolly Parton's band, a man who has worked with everyone from The Rolling Stones to The Georgia Satellites to Leon Russell declared it to be a work of genius.

The durability of the Boaz ONE comes from its unique material make up. The entire guitar, except for the inside of the neck is made from a durable reinforced polycarbonate. Polycarbonate allows the guitar to withstand most bumps and bruises as well as humidity, moisture, and even keeps the fret boards from twisting. So that the player should never have to take it for a setup!

Boaz is saying: "One of the most frustrating issues with a standard guitar is the lack of durability. They are extremely susceptible to chips, cracks, and deformations leading to constantly taking the guitar in for a new setup. A durable reinforced polycarbonate was the perfect solution for this problem and with the help of my team we were able to maintain high quality feel and sound. All the while making setting the Boaz ONE apart from all other guitars when it comes to durability".

Now, guitar players finally got the opportunity to begin their journey into a whole new era of guitar design and technology. The Boaz ONE team is no running a Kickstarter campaign to raise the cash necessary to complete the development process and begin manufacturing and delivering the Boaz ONE .