One Day I was listening to the Modern Maker Podcast and they cut out a challenge. To make something out of bent wood. I though about it for a bit and came up with my version of a wood Low Rider Bike. I have always been fascinated with the Low rider design freedoms and though it would look cool if it was made out of laminated strips of walnut and maple. The initial concept and design period took me about a week to figure out, playing around with different frame option using a thin trip of wood as a visual guide. Once I had an idea of what it was to look like i started the process of milling the raw lumber, bending and gluing the frame together. For strength i recesses fabricated frame connections inside the frame to help with stability without loosing its wood design. The bike is about 90% wood to include a solid Silver Maple seat which was power carved with a sander for final appearance. I didn't want to use regular nuts and bolts for the connections so i opted to use all brass fasteners which gave me that classy look and it complimented the color of the frame extremely well.

In all the build took over 7 weeks to complete and i documented the entire process on Instagram and YouTube. This was my most challenging project so far but so rewarding. I never though i would have the courage or skills to accomplish such an undertaking, but i surprised even myself. Live Love Make 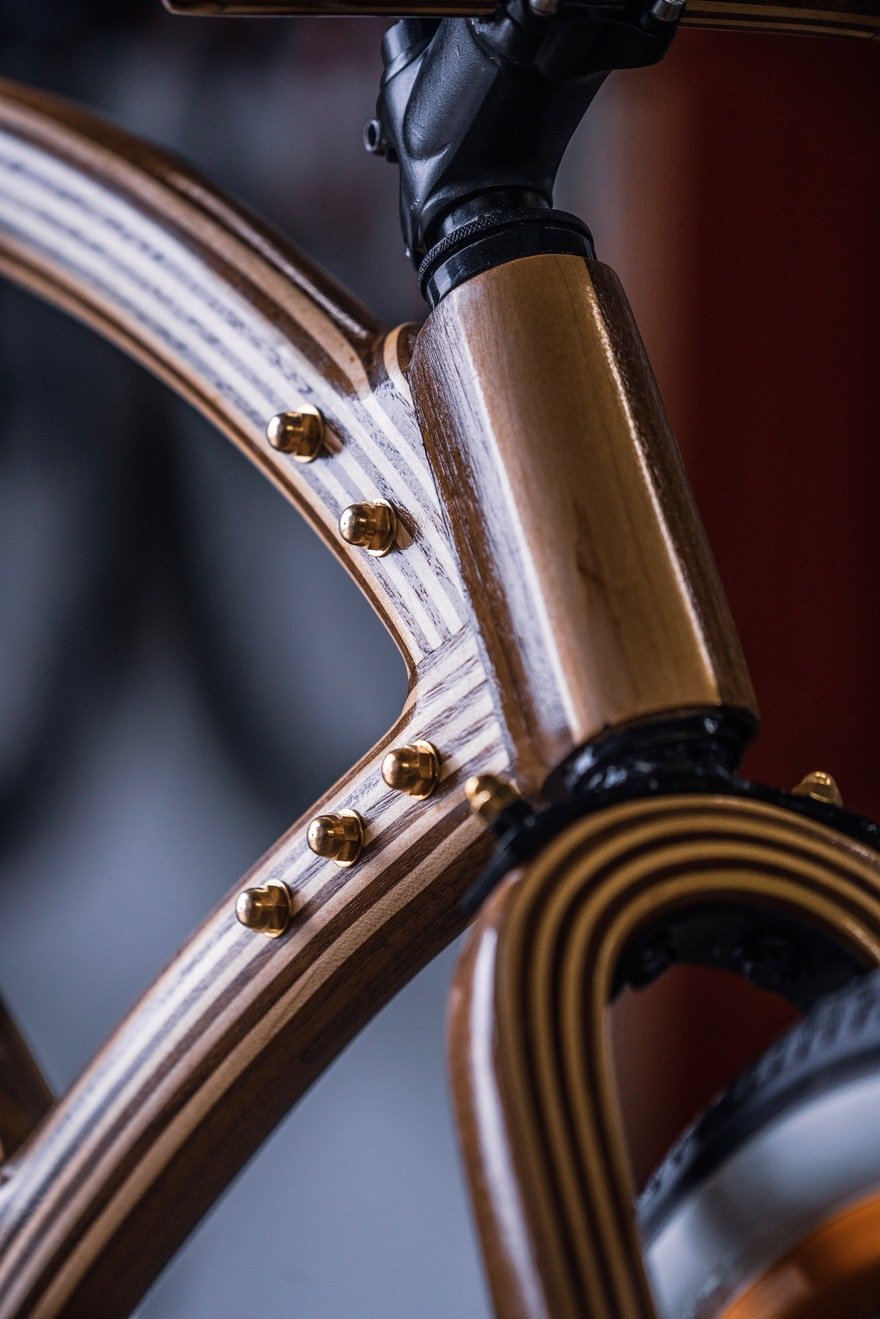 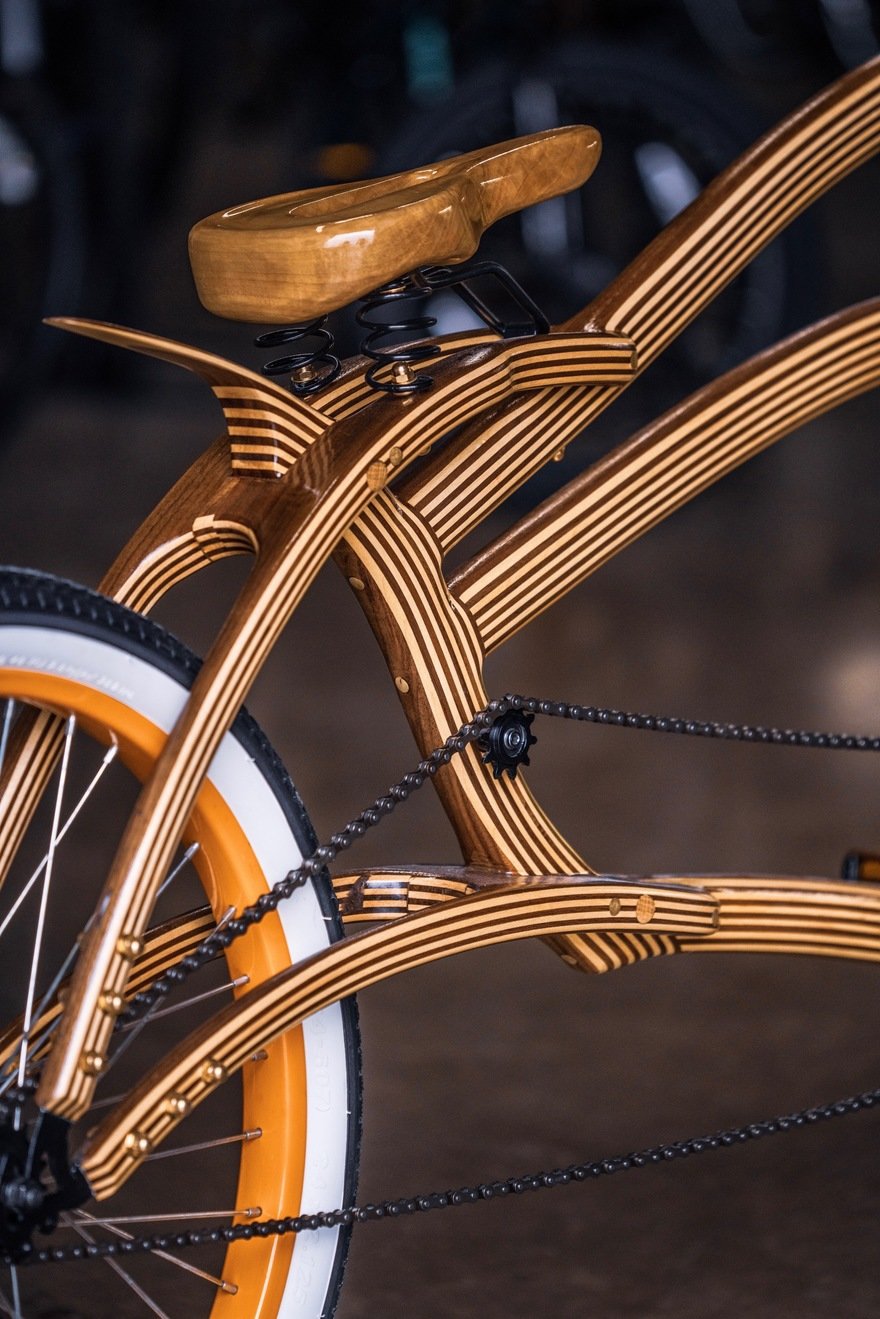 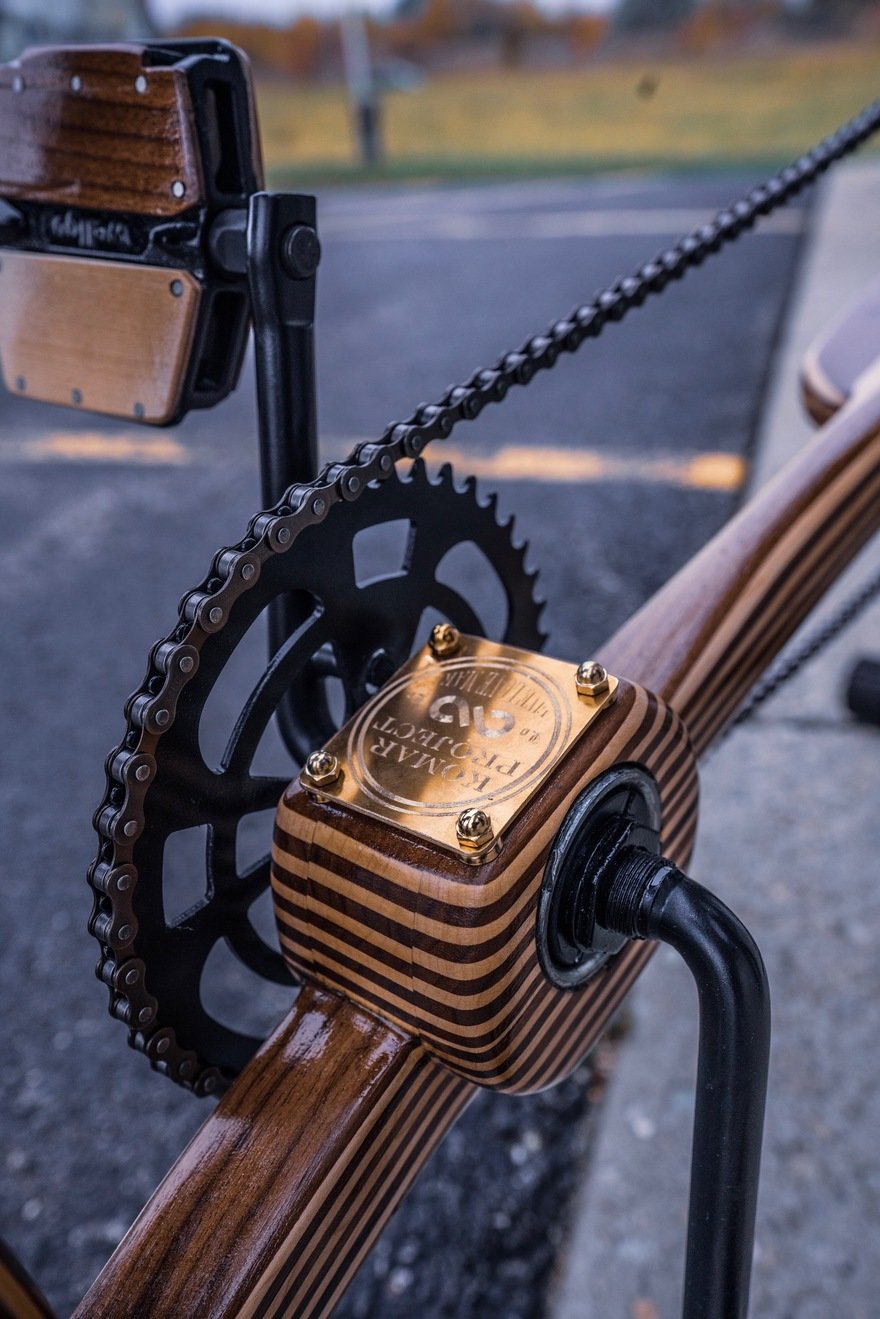 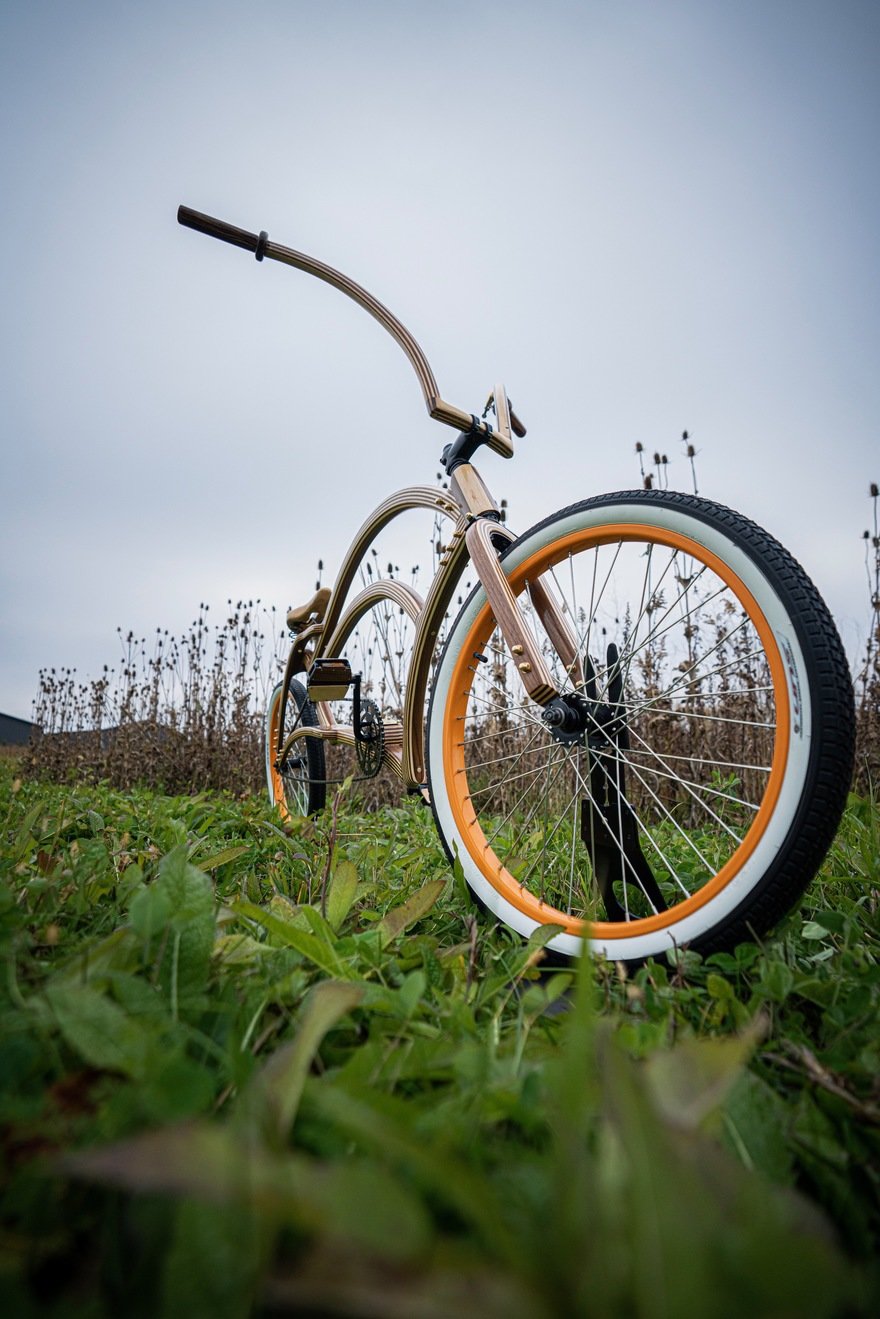 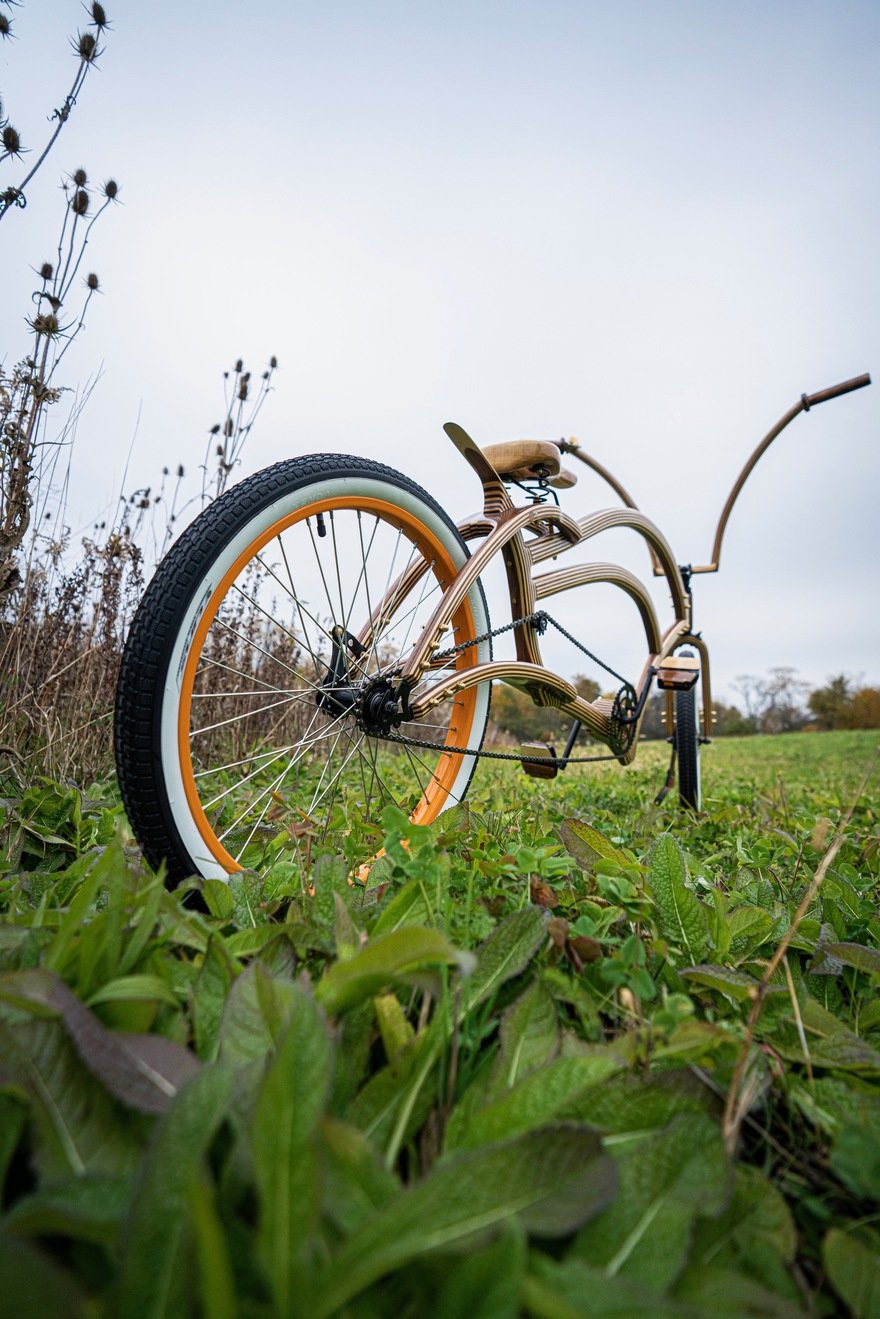 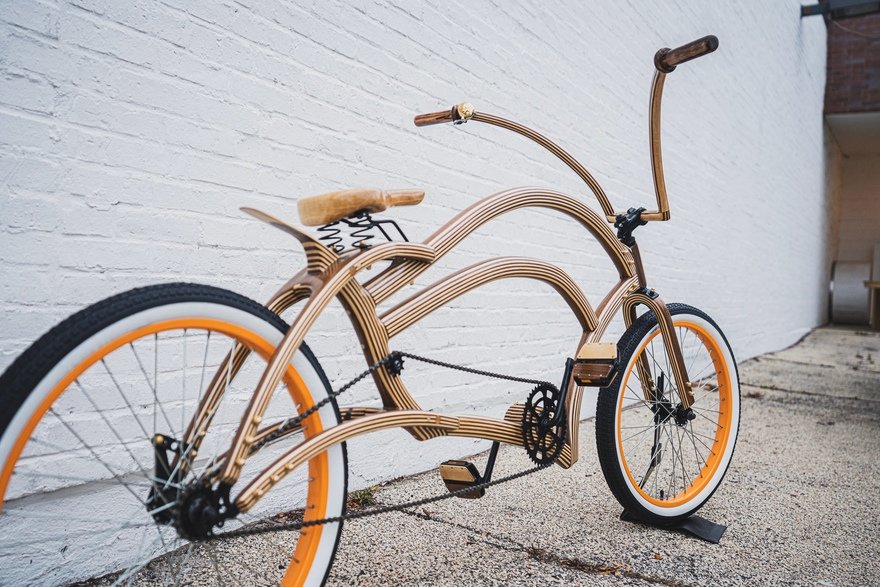 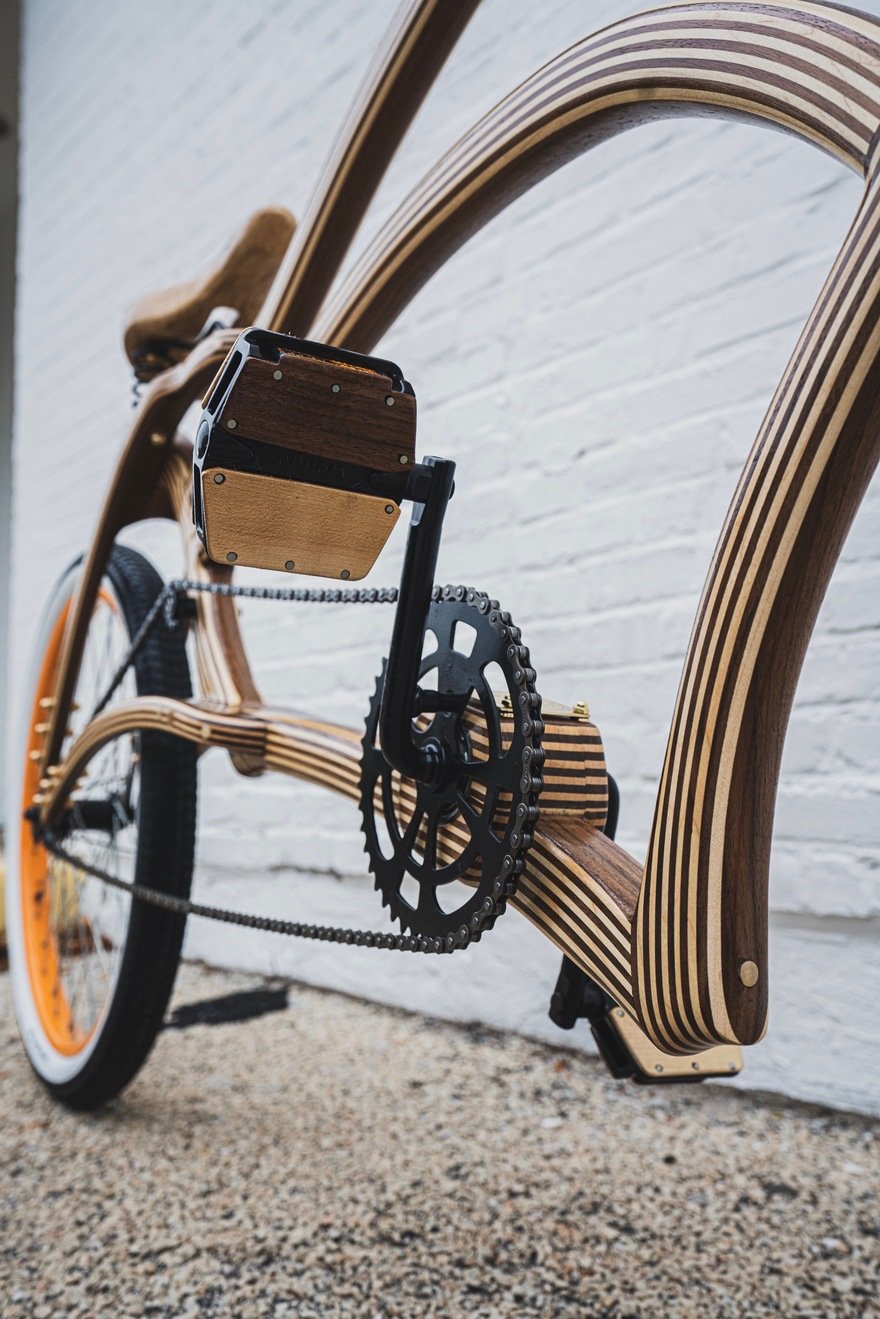 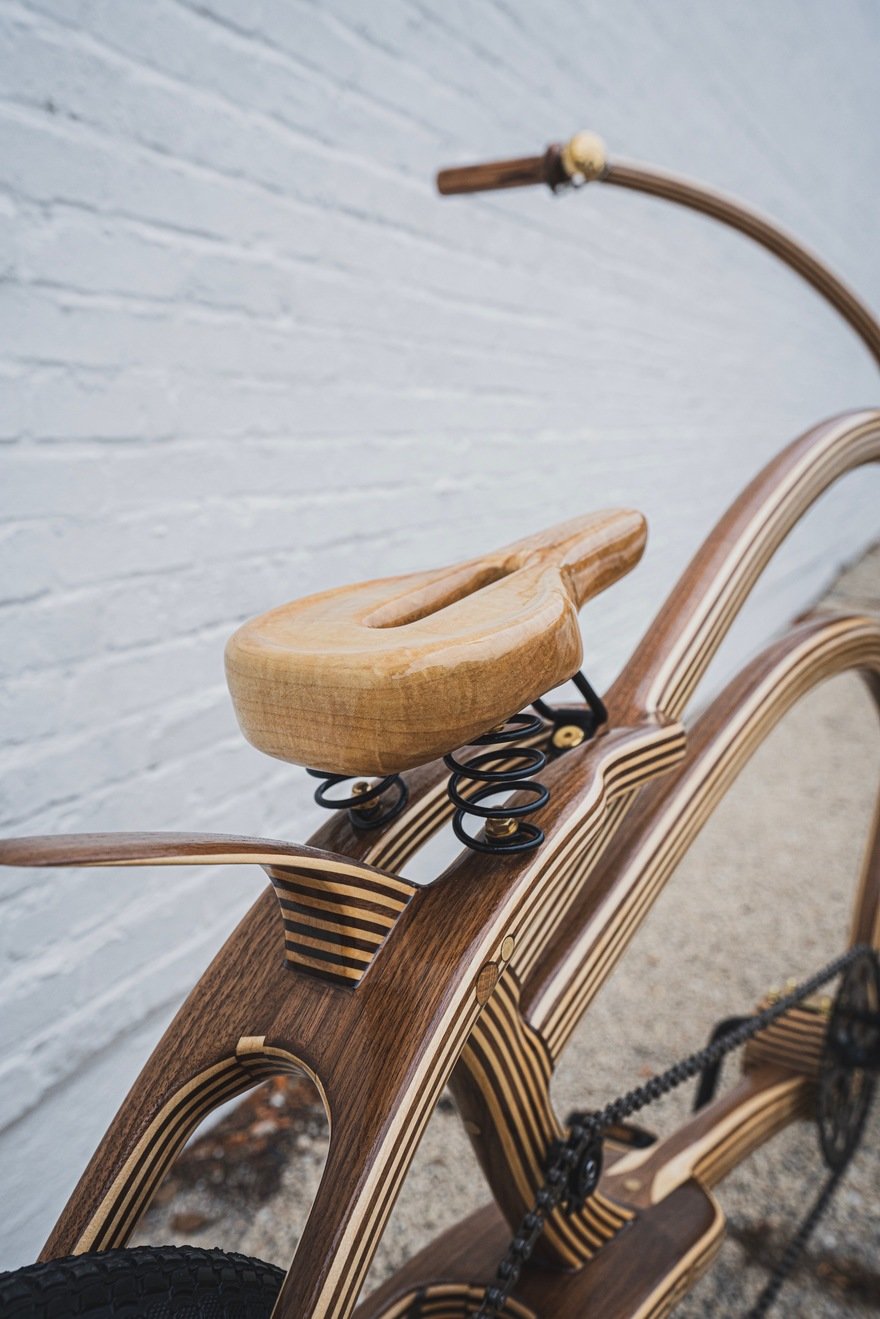 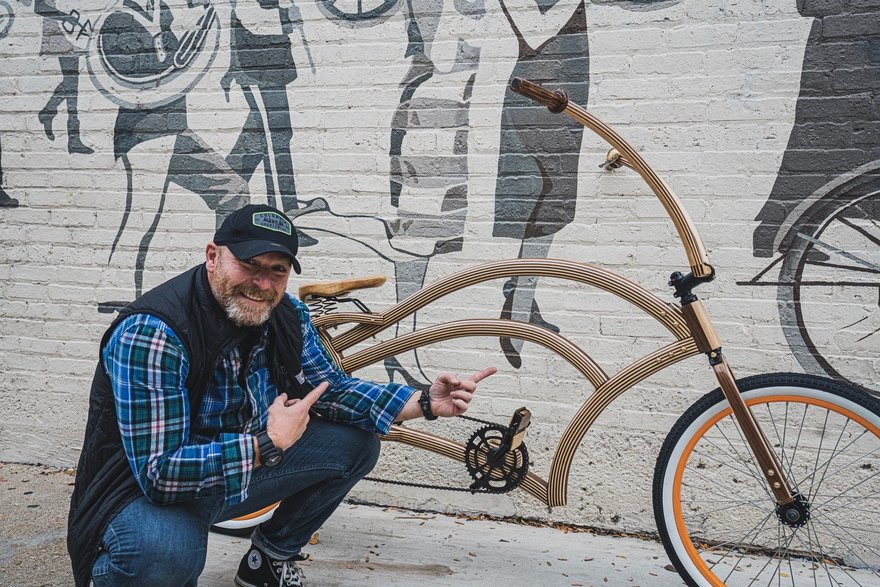 When i heard the guys at the Modern Maker Podcast were doing a wood bending challenge I never though I would be doing a wood low rider bike. Designing the frame of the bike was more difficult then I have ever experiance before because i had no idea what it was going to look like. Wood has a braking point that once you reach it, even if you steam the wood its going give, so my frame arches were restricted in that sense, but i was able to cut thin enough strips of Black Walnut and Hard Maple that it worked. I laminated all the strips, alternating between dark and light for contrast and planned all the pieces to 2" thick frame parts. At this point I was able to glue the entire frame together with the use of floating mortise and tenon joints and reinforced them with 3/8" brass dowel rods. All together there were 13 frame sections that needed to come together to allow the design flow.

The front forks were a big challenge. How could i make wood forks, which place a tremendous amount of force on the bike, with a 180 degrees bend and not have them break. I laminated the same wood, but this time i used a water bending technique. I soaked the strips of wood in hot water for 2 hours and at that point they were soft enough that i could get them over the form i made. Once they dried in the form i was about to glue them together and fabricate metal brackets to attache the wheels and handle bars.

For the handle bars i wanted something different, just a hint of exotic wood to make them pop. I fabricated hand grips from Zebra wood which has an incredible amount of grain figuring.

The final assembly did not go as expected. The first time i put my full weight on the bike i all fell apart. I was left standing, holding the handle bars as pieces of the bike rolled all over the shop. This was a devastating occurrence, however i was not going to let it stop me seeing as i was so close to finish. I worked through the night to fix the front fork mounting brackets, and added all brass hardware. Finally i was able to put on the 3 sprocket chain assembly and taking this girl for a ride.

I was so rewarding and exhilarating to take the first ride, but the seat fell off lol. At this point with all the setbacks i had during the build this was nothing new. I quickly make a few adjustments and rode like a G. lol. The best project completion feeling i ever had was riding down the street and people turning heads just to get a glimpse. This project was more then i would ever expect it to be in so many ways. Oh ya and i took first place in the challenge.