As part of their design research, Ford commissioned global research and analytics consultancy Penn Schoen Berland to survey pickup truck owners in the U.S. While I wish Ford had made the entire report public, the few tidbits they did release contained enough surprises that I felt them worth posting.

I didn't think the age ranges would be so evenly split, and thought there'd be more decline in the 65-plus age category; I've yet to see a truck that's easy to climb in and out of. No surprise on Ford having a good chunk of the market, as the F-150 has forever been the bestselling vehicle in the U.S. I was pretty surprised to see the gender numbers.

For the next infographic, I don't doubt the numbers, but I do take issue with the way they've framed it: 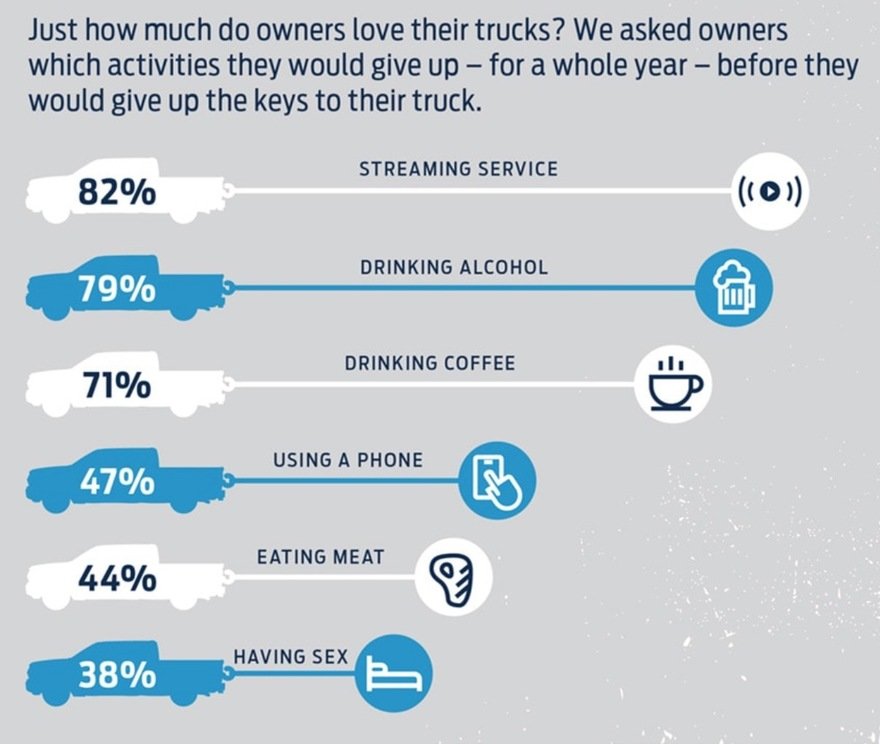 I suppose they're presenting those statistics to make it seem like pickup truck owners are fanatical. However, at least in the rural area where I live, everyone owns a truck because they use them either for work or property tasks. So I think it's unfair to compare what they would give up first, when life down here would be more or less impossible without a truck. I tried getting by without one for the first year or so, but carrying 1,000 pounds of animal feed in a bottomed-out station wagon every two weeks was unsustainable.

There are your fanatics, then.

- "94% of truck owners have used their truck to help others"

- "34% help others with their truck on a weekly basis"

Those last two stats are a little-mentioned phenomenon that I believe influences the psychology of truck drivers. In remote areas like mine, property tasks, transportation of large/heavy materials or equipment (think fencing materials, broken riding mower) can be difficult to do alone, and neighbors here often render assistance to each other. I've both helped people with my truck and been helped numerous times by neighbors with their trucks. Because these are communal tasks where the truck functions as a problem-solving tool, my guess is this creates more of a feeling of accomplishment, and probably forms more of a bond between driver and truck than is possible with a car.

The main problem with trucks is environmental. If electric trucks powered from sustainable sources become commonplace, that issue will go away. However, it's going to be up to manufacturers to convince truck owners that electric is better. I found these numbers to be abysmal: 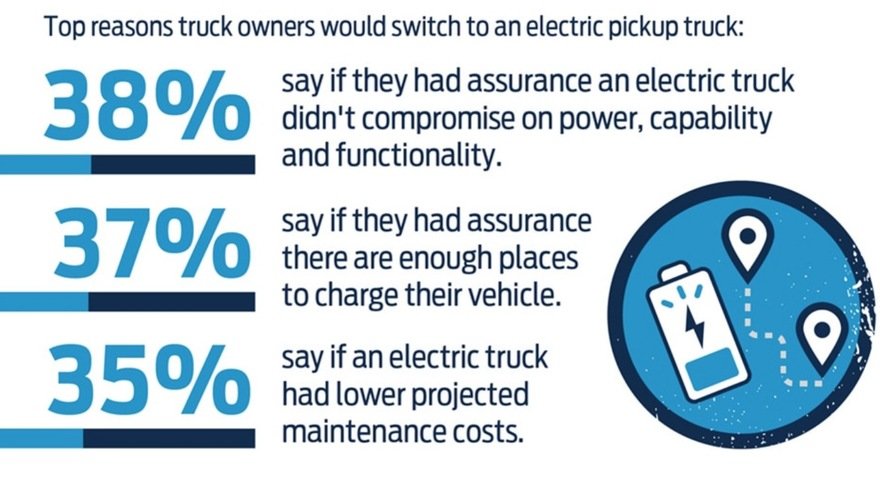 Of course, those numbers could also be low because electric trucks are so freaking expensive right now. And the design of say, the Cybertruck or the Rivian likely do not appeal to traditional truck drivers. I have little confidence that those vehicles would do what I need them to do.

If you want to see the parts of the study that Ford has published, it's here.