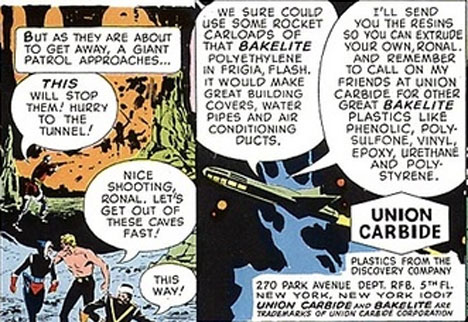 Sci-fi blog io9.com featured this excerpt from classic comic strip Flash Gordon (known to you Aussies as Speed Gordon...whatever), as an example of how good a job the strip's writers did of creating a diverse and varied alien planet. What's monopolizing our attention, though, is the bizarre effects of a sponsorship by Union Carbide: present-day cinematic product placement efforts have got nothing on the golden age of comics, looks like.

Various Union Carbide products, collected under the Bakelite moniker, are mentioned by name no less than four times on one page, starting with a polyethylene identified by catalog number, and finishing off with a laundry list of polymers most materials specialists would be hard pressed to rattle off. Apparently phrases like "I'll send you the resins so you can extrude your own, Ronal" were common parlance back in the day -- at least for intrepid space heroes.