Hell in a Handbasket: Gig Economy App Focuses on Hiring Workers to Assist in Evictions

Digital design at its very worst

While the events of 2020 have motivated many to work together and promote a sense of collective well-being, the fact remains that economic downturn also breeds a pervasive "every man for himself" mentality. In what appears to have been spawn from an evil tycoon's fever dream, an ironically named app called Civvl is banking on the desperation of gig workers exacerbated by the pandemic. As reported by CBS news, Civvl offers opportunities for gig workers to work as foreclosure movers and process servers, a job that involves serving tenants with a variety of legal papers. 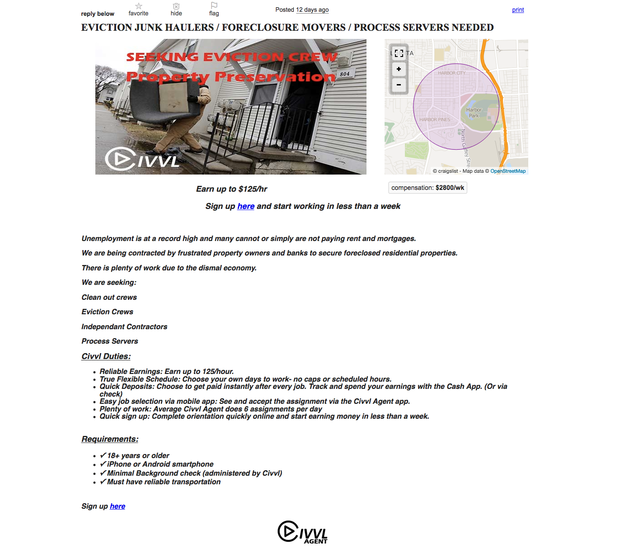 Posts on Craigslists began appearing in August and September 2020 rife with euphemisms, offering enticing jargon familiar to the gig economy such as, "Work on your own schedule!" "Make $125 an hour, or $2800 a week!", all the while likely activating the same community of people who are at risk of being evicted themselves. Isn't it fun making money evicting your neighbors?

Considering eviction moratoriums are delayed in places like New York City, the legality of this app is also in question. Civvl, in turn, has found a truly weasel-y approach for operating in this legal grey zone. As VICE reports, "Civvl did not respond to a question about how the company ensures evictions are legal, though based on the Terms of Service, it appears to pass all risk onto the companies using its platform, stating that it simply 'provides lead generation to independent contractors,' and does not actually carry out the work itself." 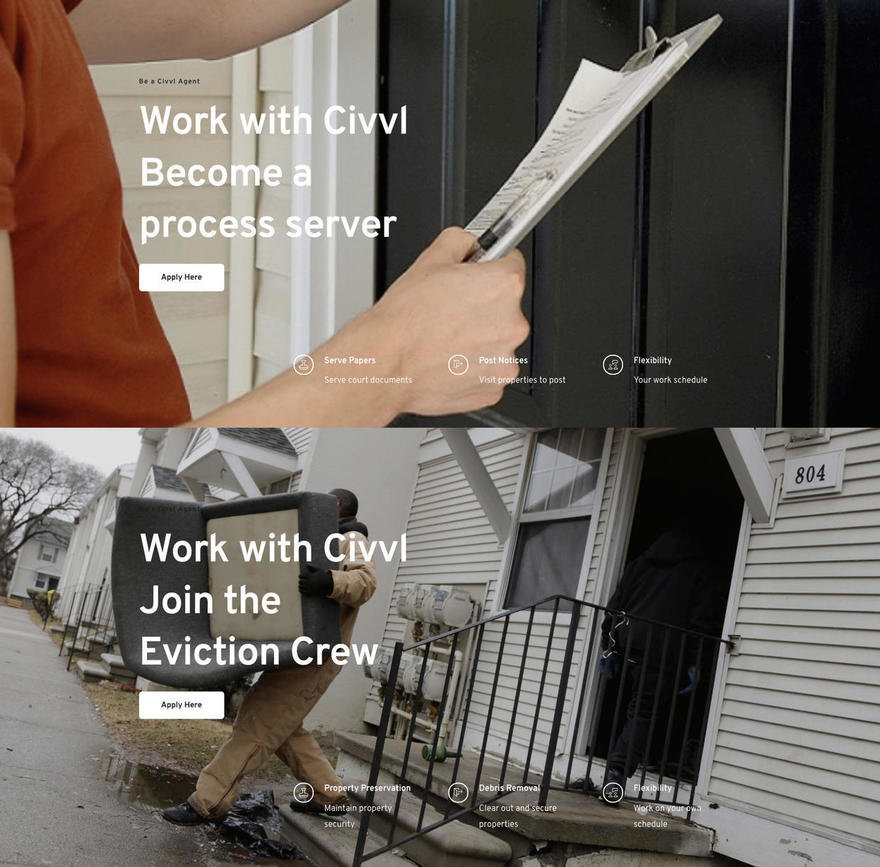 No matter the angle you look at it, an app like this serves as a pure example of the potential perils of digital design, demonstrating what society could look like if we put money above people in every design decision. These past few months have initiated a reckoning within the design community, causing many to reflect on their complicity when it comes to prioritizing the needs of their clients above the communities and individuals their work serves. The recently released Netflix documentary The Social Dilemma exists as another example of the regret that inevitably ensues when developers and designers don't account for the potential consequences of design developments motivated primarily by profit.

While we hope all you designers out there are striving to not create overtly devious apps like Civvl, their story is also a cautionary tale of what can arise from seemingly innocent design decisions if ethical designers don't a.) speak up and b.) do their research.

Hell in a Handbasket: Gig Economy App Focuses on Hiring Workers to Assist in Evictions