With the exception of Bollinger, few companies making or planning an electric pickup truck have exploited the lack of a motor engine to wring greater functionality out of the form factor. But Canoo, whose MPDV we admired back in December, has applied fresh design to the category. Their just-unveiled, as-yet-unnamed pickup takes advantage of the "skateboard"-style platform to pull off several innovative, functional improvements--and a coupel of questionable design decisions, which we'll get to in a sec. 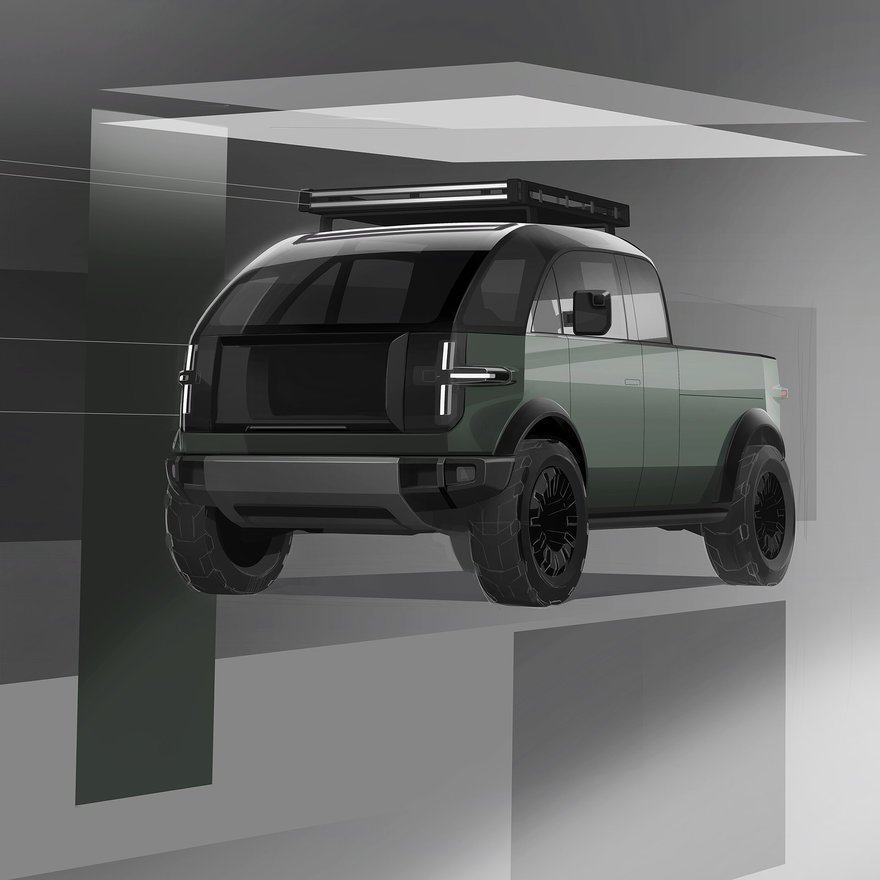 With no engine to house, the cab has been pushed to the extreme front of the vehicle. I own a kei truck with this form, and it provides unparalleled visibility. This is a great feature. 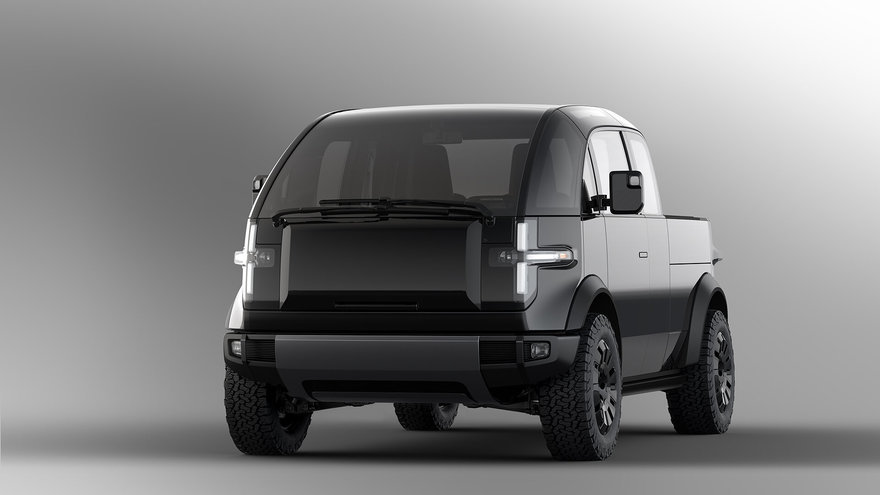 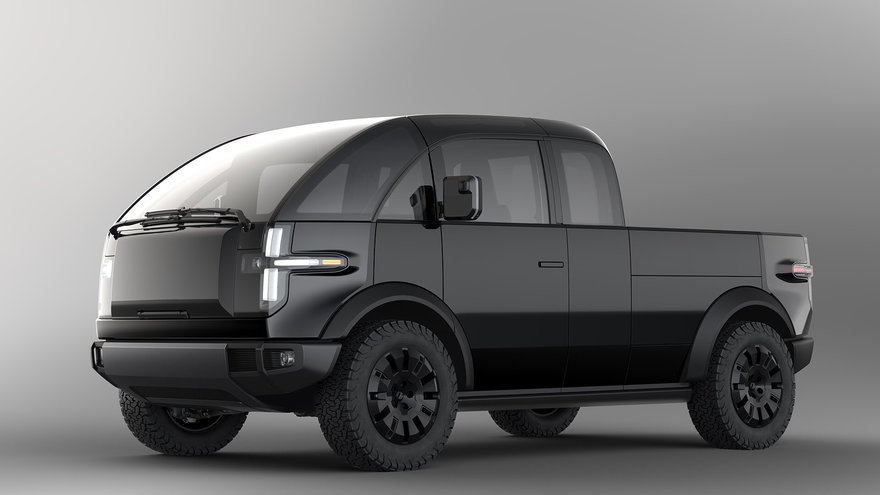 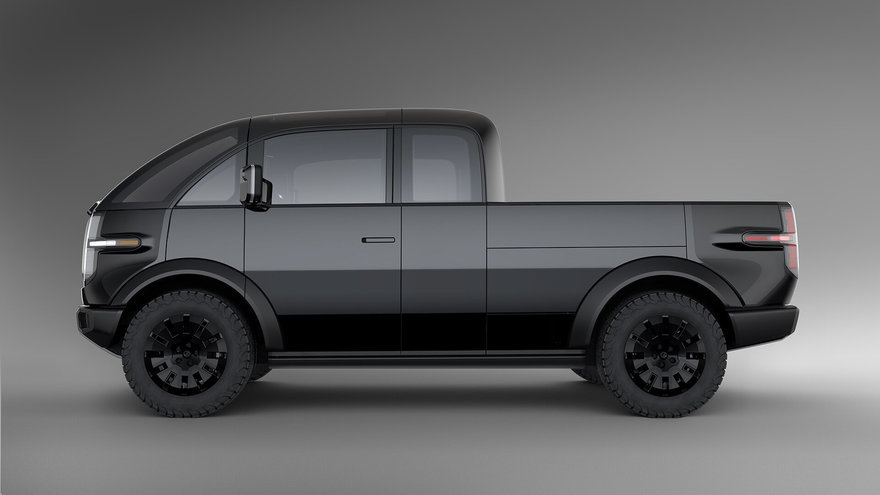 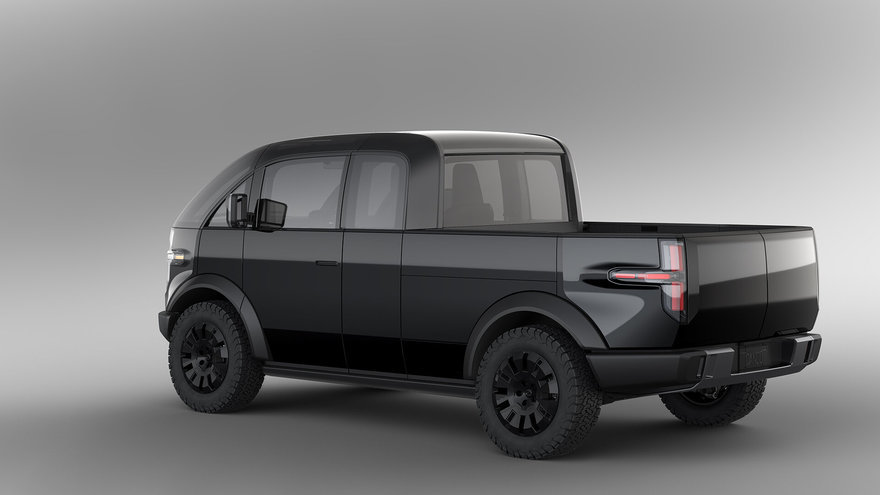 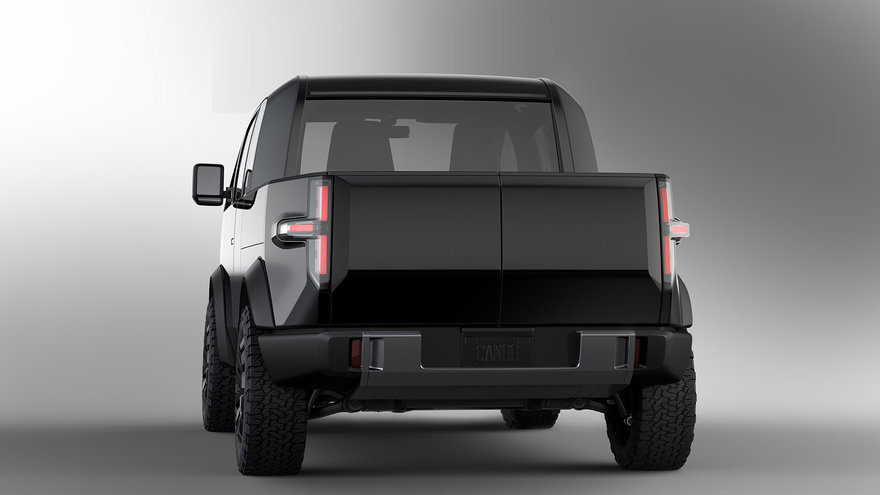 The truck's nose flips down to reveal a cargo storage area with power outlets, and the door itself is reportedly strong enough to serve as a work table: 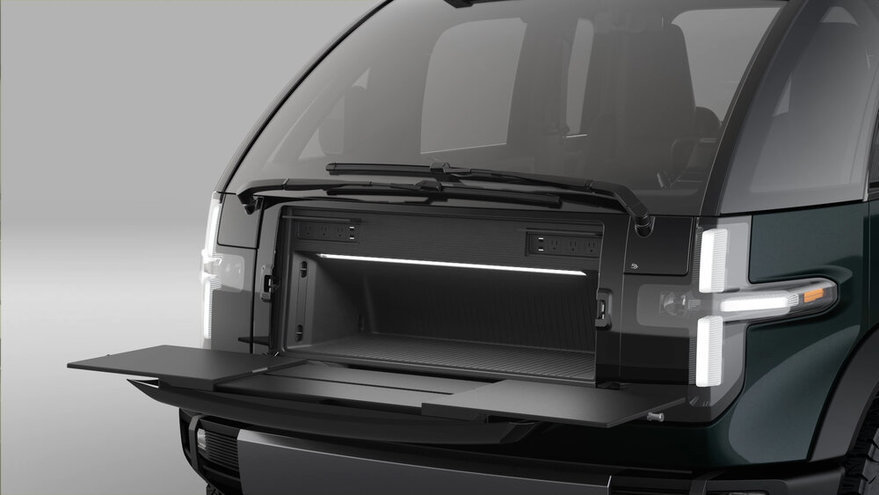 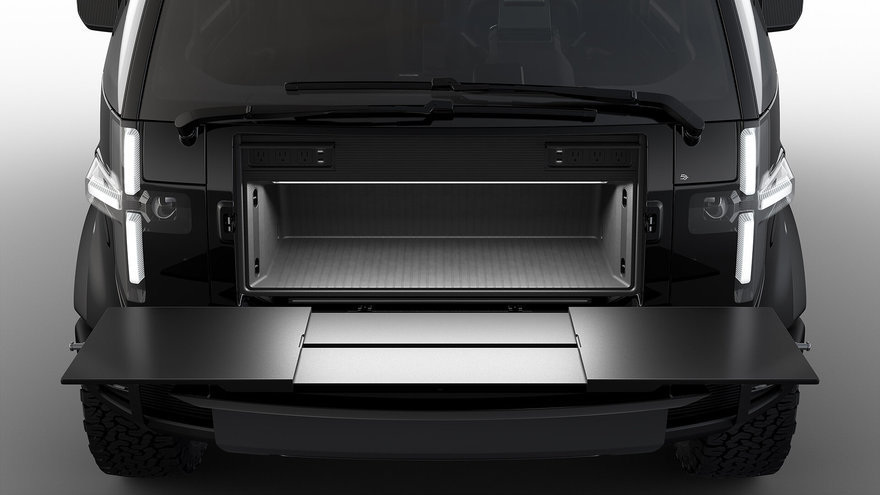 I'd like to see some tie-down points in here; this would be a perfect place to stow a chainsaw that you don't want jostling around in the bed or leaking bar oil all over your interior. But I'd also want to keep the gas and bar oil containers in here, and would like to see some way to secure them. (While I'm making requests, a brushguard would also be nice, and an included squeegee to scrap the bugs off of that flat face.) 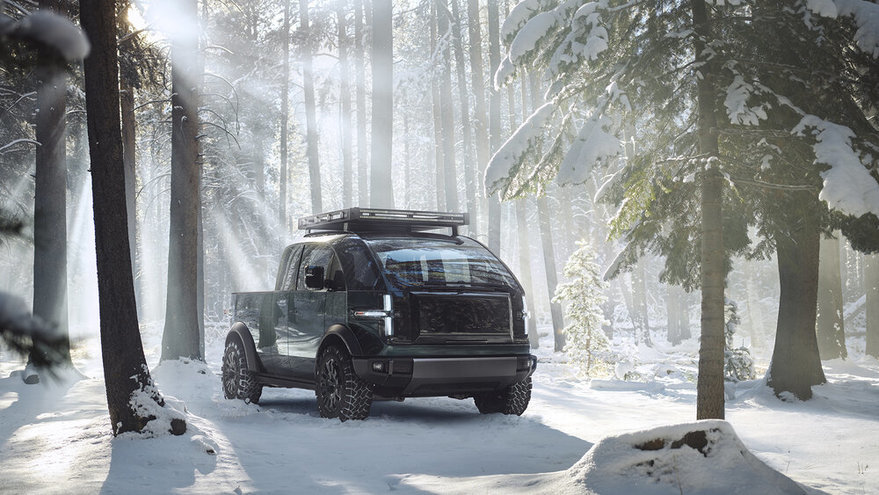 Another two fold-down surfaces with nearby power outlets are provided in the bed walls, one on each side: 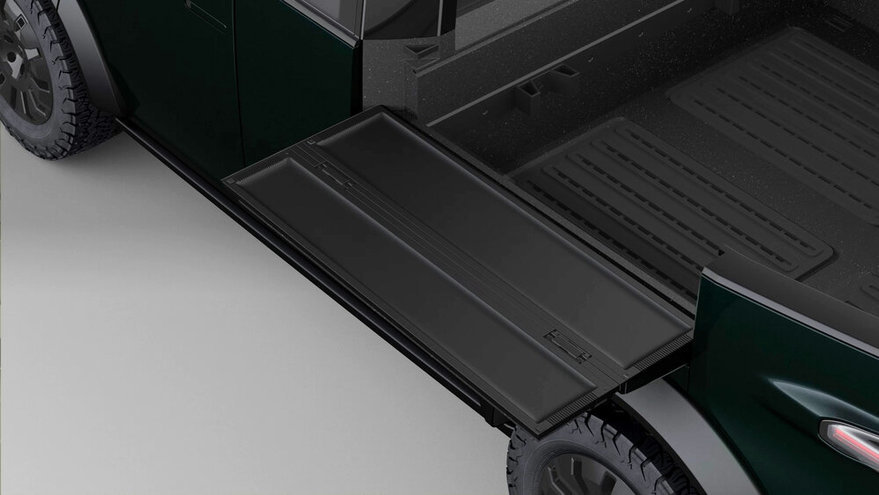 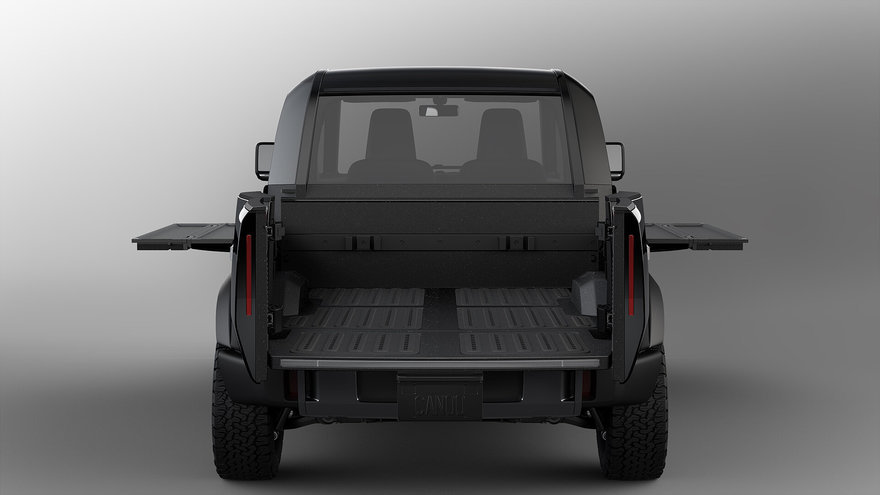 I might have preferred to see more storage here (as in Ram Trucks' "Ram Box") than a platform, but at least Canoo is trying to wring some extra utility out of an area where most manufacturers offer none.

A side step slides out from behind the cabin, allowing you to get a leg up to access the bed from the sides (or the roof rack up top). This step is hollow and contains a lockable storage compartment. I like the step, but would like it better if the step's fascia didn't protrude above and to the sides. 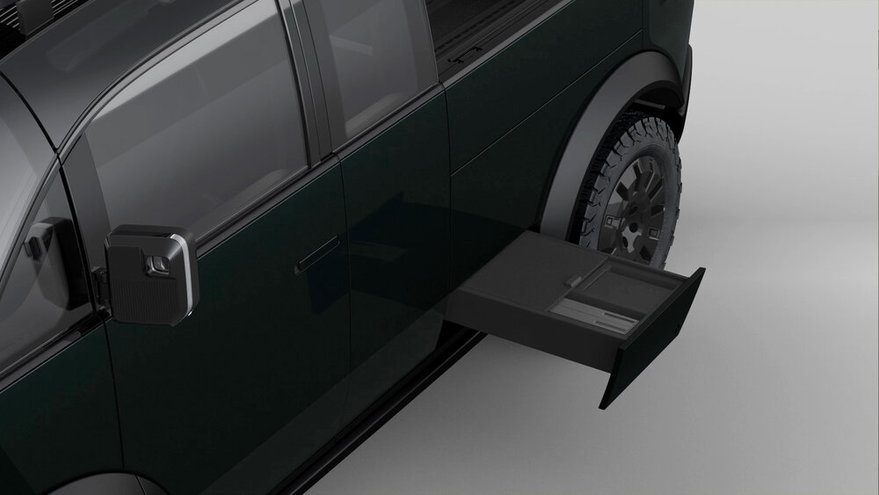 They offer space dividers for the bed, but I don't know that I'd ever use them. For trucks that are going off-road and/or carrying heavy items, what you want is things that are securely tied down, not just separated. 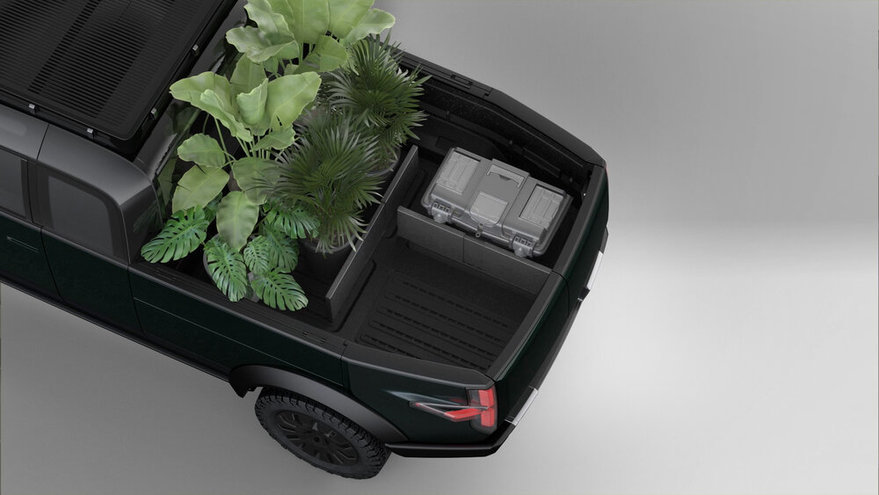 The entire truck can serve as a generator, with power outlets on all sides of the vehicle. As we recently saw with Ford's hybrid F-150 with the Pro Power option, a feature like this comes in super handy in a disaster area. 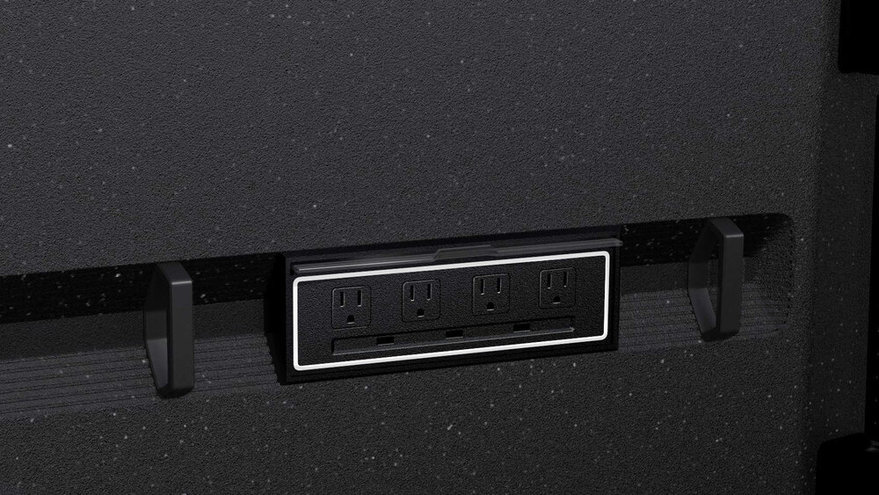 Now for what I think is the lone bad design decision made here. Take a look at the bed: 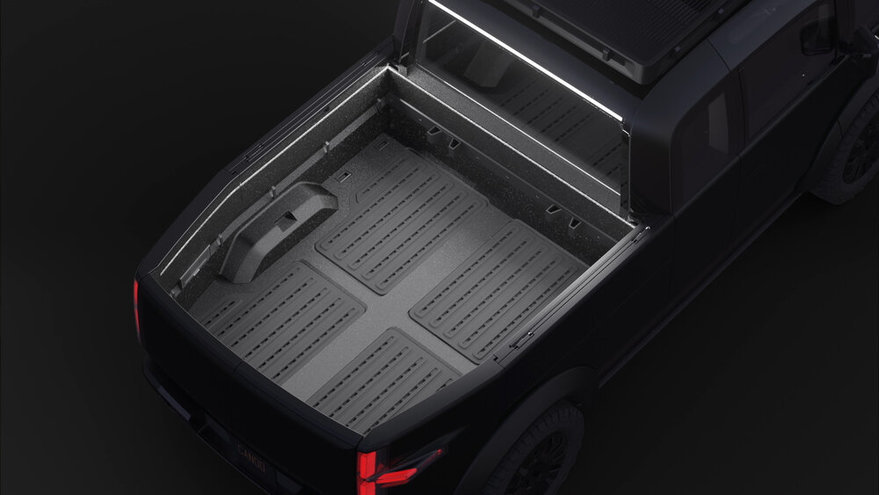 Why in God's name does it taper? Why would you needlessly subtract usable cargo space, particularly when you're already paying the price everywhere else of the vehicle being as wide as it is? (It's only slightly narrower than a Ford F-150, at 78" vs 79.9", both figures not including the mirrors.) The release says the bed is 64 inches wide--we assume that's wall-to-wall, they don't mention the between-the-wheel-wells width--which is quite generous. But there's no reason beyond stupid style that that generosity shouldn't continue through the full length of the vehicle.

The release does say that "a 4 by 8 ft sheet of plywood [can] easily fit" in the bed--and that's in both the X and Y axes. While the bed is six feet long, it extends by means of an innovative slide-out surface that rises to the same level of the bed. The split tailgate, which consists of two vertically-hinged doors, then swings back on either side to extend the sidewalls. 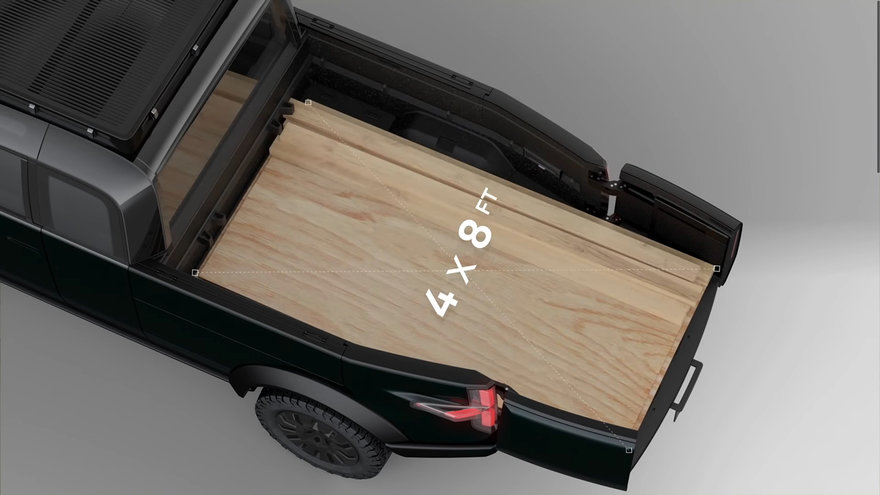 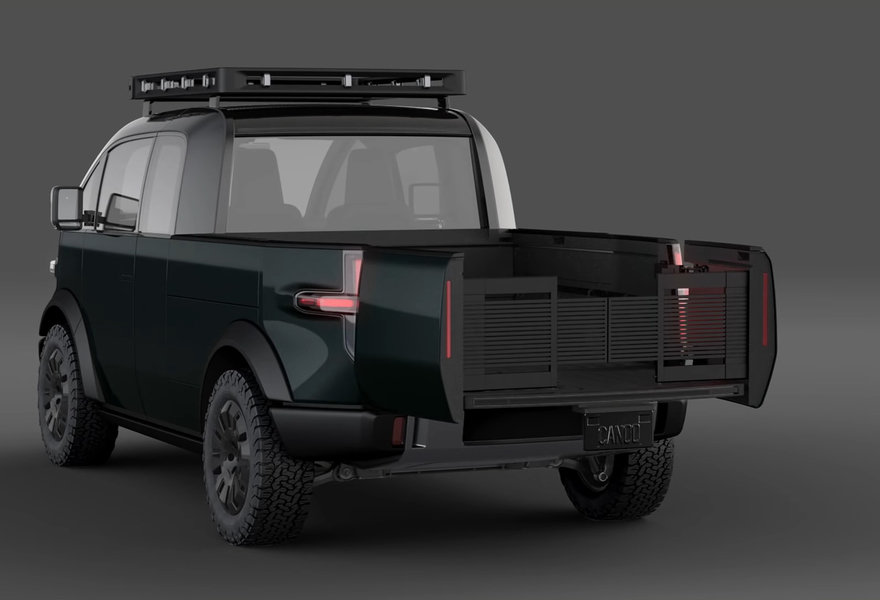 The steering wheel's shape is a terrible idea, and I hope they'll jettison it prior to launch: 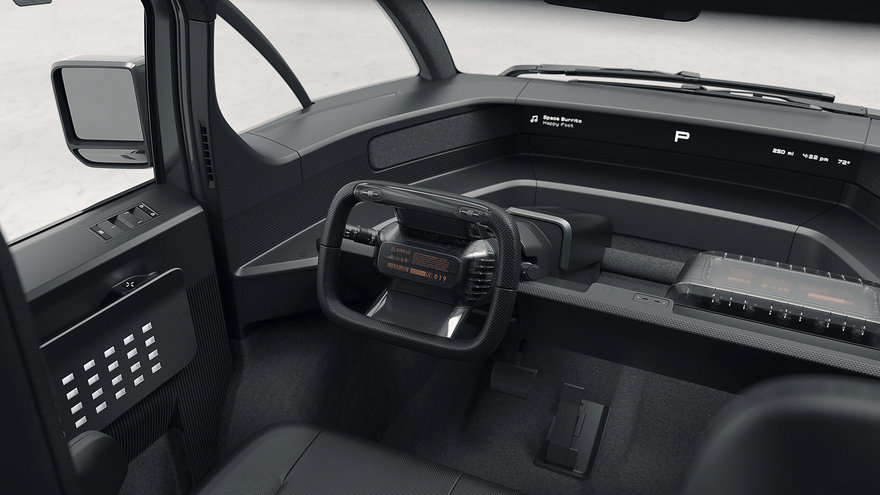 Whomever insisted on that shape for the wheel should be forced to reverse the truck downhill on a snaking path with a heavy load, or try backing a trailer up, to see how well they are able to control the wheel.

Lastly here's what the vehicle would look like with a camper shell, though they've provided no details on this: 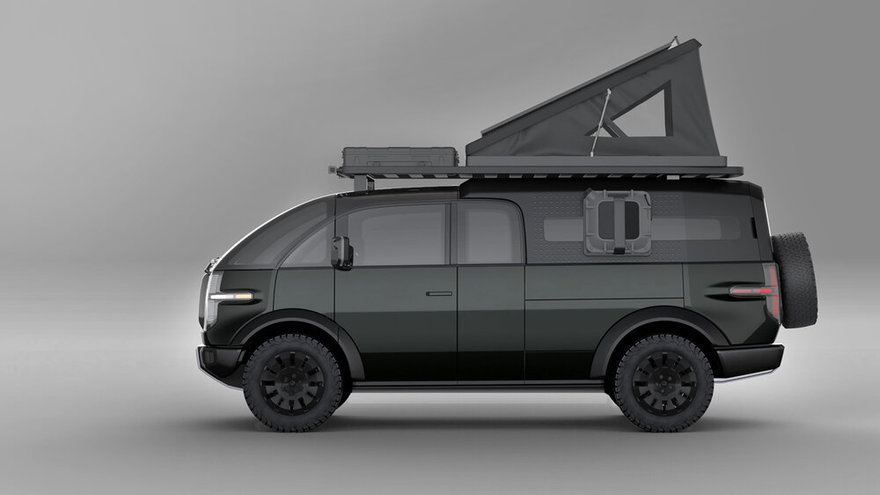 My few gripes aside, Canoo's pickup is the only one I've seen, besides the Bollinger B2, where the designers have attempted to increase the vehicle's utility by exploiting the extra space available on an electric platform. I'm impressed by the work of the design team, who appears to have put in a lot of thoughtful work here and have remained aesthetically disciplined. In contrast, the Tesla Cybertruck looks like a crass plaything.

If you want to see some of the features above in action, the launch video went live yesterday: