Yea or Nay? Dacia's System of Integrating Your Smartphone Into the Car's Dashboard

The Media Control feature arrives in the new Sandero

I'm not sure what problems this solves for the end user, but it is an interestingly experimental step for a carmaker to take. Dacia, one of the automotive brands under the Groupe Renault umbrella, has designed a car with no infotainment screen. Instead, drivers of the Dacia Sandero are meant to flip up a panel on the dash and nest their smartphone inside. The phone then connects with the car via Bluetooth and acts as the infotainment screen. 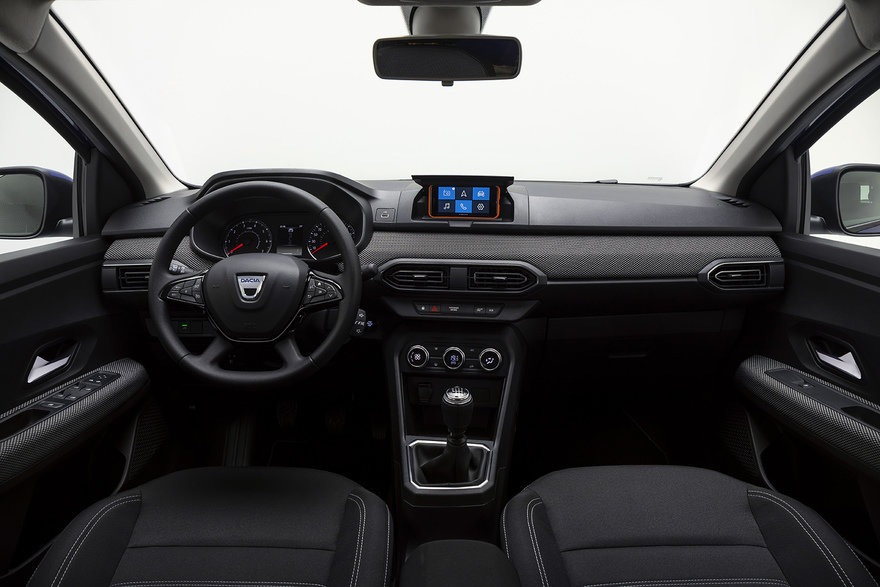 Dacia says they designed this Media Control system in part to eliminate "the hassle of a loose mount on an air conditioning grille," suggesting that their customers cannot find a suitable spot to leave their phones. Beyond that, the designers feel that the system fulfills their surveyed customers' desires for simplicity and ergonomic convenience:

"Installed in its universal slot in the centre of the New Dacia Sandero's dashboard, and firmly held in place, the smartphone is indeed perfectly integrated into the driving experience. The strategic placement, high up and slightly facing the driver, provides perfect visibility of the information given, ensuring safety. 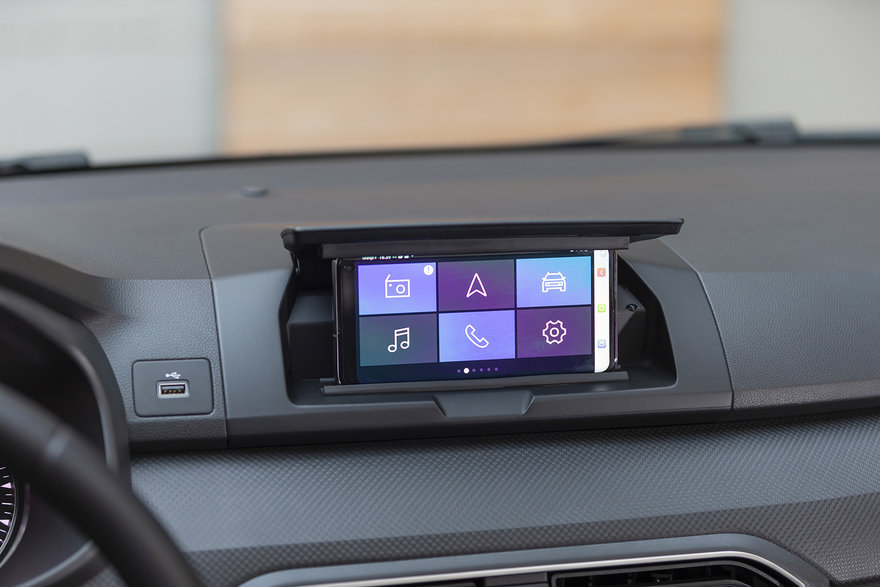 "The simplicity of the system lies in its ergonomics. Thanks to the optimal positioning of the docking station for the smartphone, everything is easily accessible with a few clicks. The application is intuitive, with a user interface that allows efficient and fluid navigation through the menus. 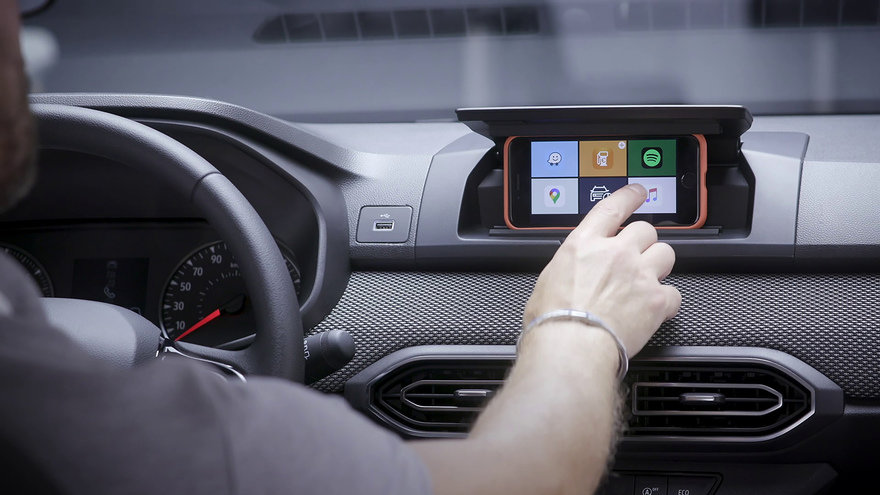 "The replication of the actions performed on the smartphone in the central screen of the dashboard makes it even easier to get to grips with the system. Finally, the steering wheel controls make it easy to control the application to change tracks, radio stations, vary the volume or even answer or hang up calls. And for added convenience and safety, the voice command of the smartphone is there. 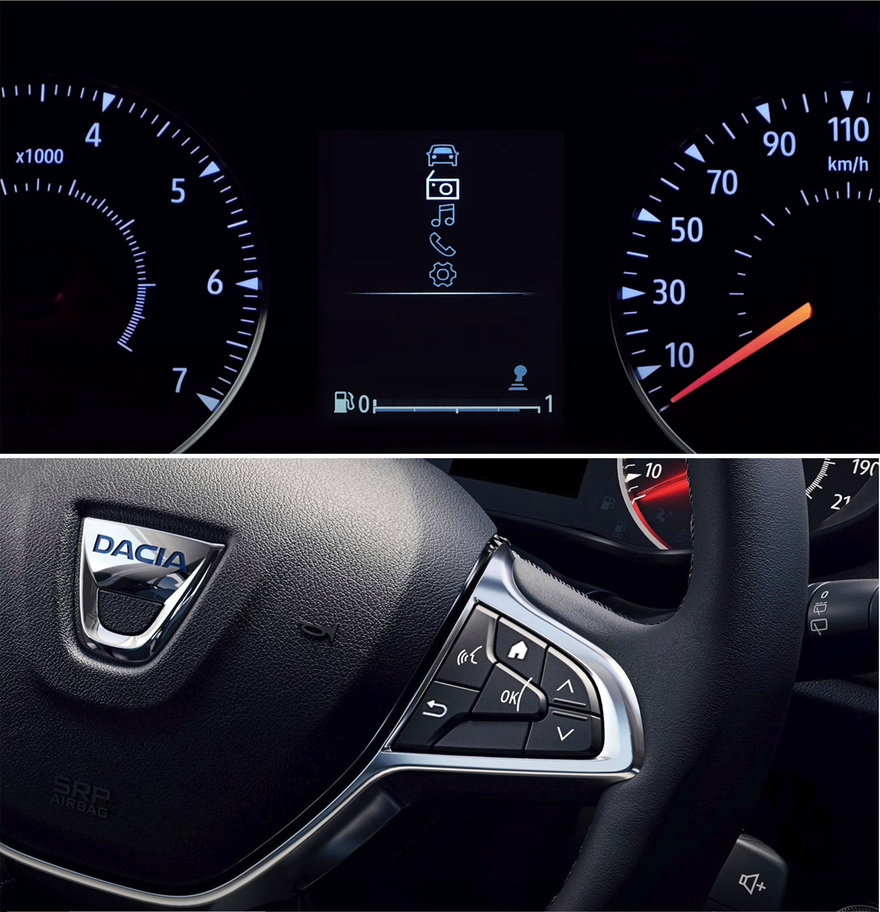 "And when the phone is not in place, the housing disappears into the dashboard." 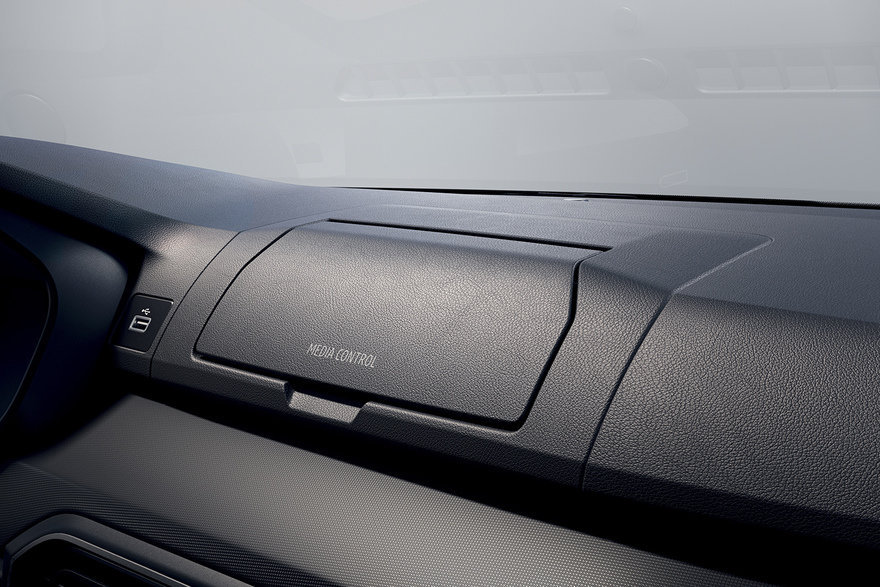 Additionally, a warning tone sounds to remind you to take the phone with you when you get out of the car.

The only thing I'd prefer about this system, over the screens in the vehicles I currently drive, is the high-up screen placement. However, both my truck and my wagon have built-in screens that are much larger, which I find helpful for navigation.

Beyond that I cannot see a clear advantage to the end user, except that Dacia may be able to knock a few Euros off of the sticker price for not having to include a screen.

What say you, would you prefer Media Control over having a built-in screen?

Yea or Nay? Dacia's System of Integrating Your Smartphone Into the Car's Dashboard